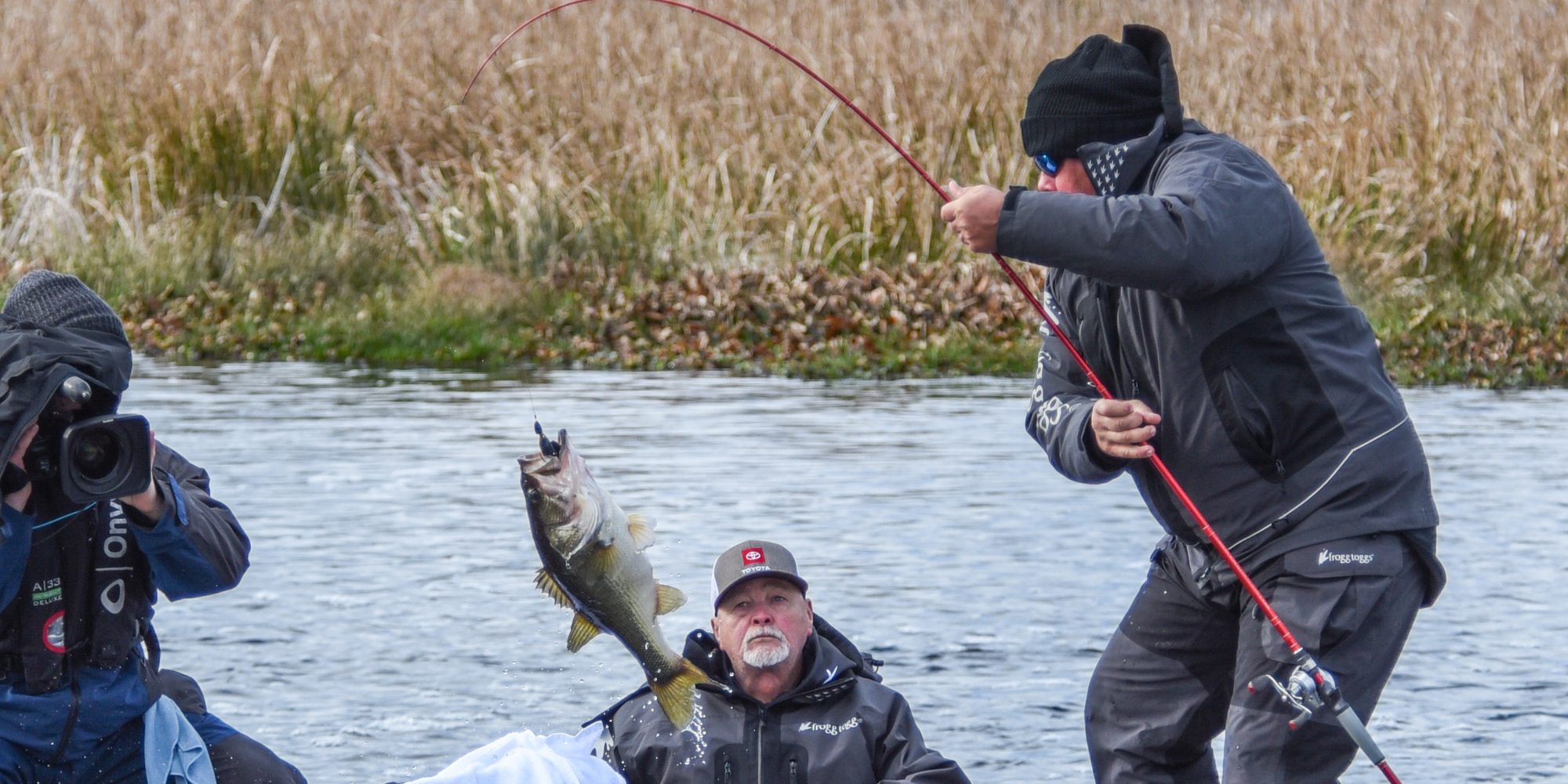 Chris Lane brings one of his 4-plus-pounders to hand as he continues to dominate Day 1. Photo by Garrick Dixon

February 7, 2020 (Tulsa, Okla.) – Alabama resident Chris Lane finished day one of the 2020 Bass Pro Tour B&W Hitches Stage One Presented by Power-Pole at the top of SCORETRACKER® with 35 pounds, 12 ounces representing nine bass. Weather over recent days on Lake Eufaula played a factor in today’s competition as the excessive rain, wind, and lightning led to rising lake levels and muddy water conditions. Josh Bertrand finished in second with seven total bass weighing in at 26-6. Brandon Coulter caught the Berkley Big Bass of the day, which weighed in at 7-14.

Chris Lane took an early lead in Period 1 by catching the first bass of the 2020 Bass Pro Tour at 8:09 a.m. local time. The Power-Pole pro had eight fish for 33-9 – a more than four-pound average – at the conclusion of that first period. Despite a drought in Period 2 and only one fish in Period 3, Lane held his lead throughout the day. Included in his total were fish that weighed 5-11 and 5-7, respectively.

“That was a great first period,” exclaimed Lane. “(In Period 3), I found an area late in the day with some clear water, and I made the mistake of not going there soon enough in the day. I look forward to getting back there (Sunday).”

Josh Bertrand moved from fifth place to end the day at second despite a slower start in Period 1 than others. His largest bass of the day weighed in at 6-10 and landed two others over four pounds. The Berkley pro, who lives in Arizona, didn’t know what to expect today and indicated that he hopes for better weather in the coming days may help hasten the pace of the game.

“We have some better weather coming so it might bust wide open,” said Bertrand, when asked about returning on Sunday to Lake Eufaula for his second Qualifying Day.

The Qualifying Round continues Saturday with Group B, which includes Edwin Evers, 2019 Points Champion and REDCREST Presented by Venmo Champion, fishing greats Kevin VanDam and Mike Iaconelli, as well as 2019 MLF World Champion Jacob Wheeler and MLF rookie David Dudley. The weather forecast calls for a slightly warmer day with a high of 57 degrees and scattered showers midday.

Fans can catch all the action every day of competition on MLF NOW! live stream on MajorLeagueFishing.com or download the MLF app for your Apple or GooglePlay device or on MyOutdoorTV (MOTV).

The Bass Pro Tour began in 2019 and features 80 of the best professional anglers in the world, including Kevin VanDam, Edwin Evers, Aaron Martens, Mike Iaconelli, Jordan Lee, and Skeet Reese. Each stage includes six days of competition using the Major League Fishing, catch, weigh, and-immediately-release format, where every bass over a variable minimum weight, which is two pounds on Lake Eufaula for Stage One, toward a cumulative weight total for the day. Variable minimum weights are determined by fishery akin to a golf course handicap. The field of 80 anglers is divided into two groups of 40 to compete on days one and two respectively for the Qualifying Rounds. On days three and four, the field is culled based on a combined two-day total weight from each angler’s Qualifying Rounds. The winners from each Qualifying Round advance automatically to the Championship Round. The top 19 anglers from each group in the Elimination Round (38 total) advance to the Knockout Round on Day 5, which determines who will compete on that final day, the Championship Round, for the Stage title and $100,000.

In addition to the economic impact on a host community, Major League Fishing showcases the region through their award-winning, live and linear programming. Each Stage of the Bass Pro Tour is broadcast live on the Major League Fishing app, MyOutdoorTV (MOTV), and majorleaguefishing.com, totaling more than 325 hours of original programming. Fans can follow the fast-paced nature of the MLF format as it unfolds on the live leaderboard through SCORETRACKER® updates. Highlights from each Stage of the 2020 Bass Pro Tour will air on Discovery Network beginning in July 2020 and Sportsman Channel in early 2021.