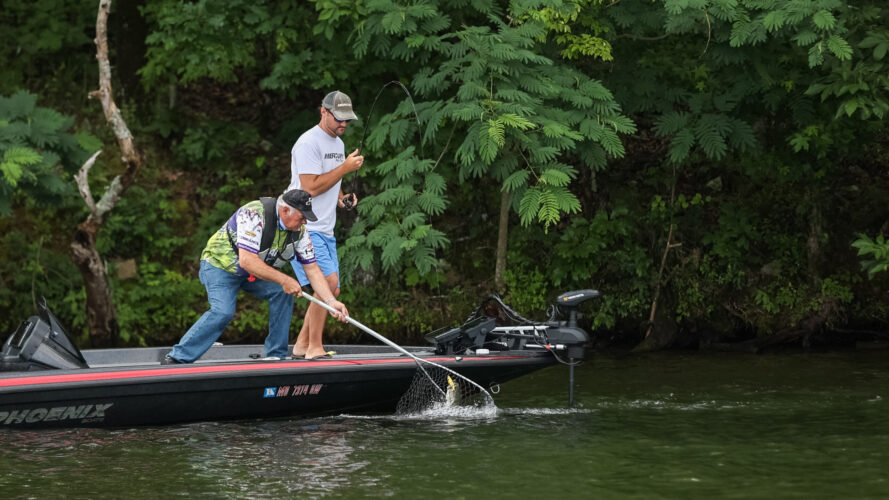 HOT SPRINGS, Ark. – It is turning in to the Conner Cunningham show at Lake Hamilton this week. After starting the day in with a 4-pound, 10-ounce lead, Cunningham, from Springfield, Missouri, weighed in a five-bass limit Friday totaling 15 pounds, 2 ounces, to extend his lead and pace the final 10 boaters that have now qualified to compete on Championship Saturday at the 39th annual Phoenix Bass Fishing League All-American Championship on Lake Hamilton Presented by T-H Marine in Hot Springs, Arkansas.

The final 10 boaters and Strike King Co-anglers are now set, and competition will resume tomorrow morning on Championship Saturday. The three-day tournament, hosted by the Arkansas Department of Parks and Tourism and Visit Hot Springs, features the nation’s best weekend grassroots anglers competing for a top prize of up to $120,000, and a top prize of $50,000 for the winning Strike King co-angler.

“Today definitely blew all of my expectations out of the water,” a happy Cunningham said after weighing in on Friday. “I’m honored to just be here, let alone leading this thing. The worst that I can do tomorrow is 10th place.”

Cunningham said that he fished the same way Friday that he did on Day 1, covering water and hitting around 30 different spots with a trio of baits that he declined to divulge.

“I’m just covering a ton of water and fishing what’s in front of me,” Cunningham said. “I caught my last fish today out deep, cranking a hump, and I was fortunate that it was a 5-pounder.

“Tomorrow, I’ll fish my fish the whole entire day,” Cunningham said. “I’ve been trying to save some. This lake is small, and I’ve been laying off them the last couple of days and trying to save them. I’m going to milk it for everything it’s worth tomorrow.”

When asked what he thought about being so close to the top payout of $120,000 and how he was feeling, the Ozark Division angler said that he would sleep just fine on Friday night.

“I try not to think about the money – I just leave it with the man upstairs,” Cunningham said. “If He wants me to win, I’ll win. Now tomorrow morning when I’m taking off at 6:30 a.m. it might be a whole different ball of wax, but right now I’m just so happy to be here I think I’ll sleep just fine tonight.

The Top 10 boaters advancing to the final day of the All-American on Lake Hamilton are:

Finishing in 11th through 49th are:

“As long as the shallow bite is working and those deep bites set up on brush piles, it should be a good day. Really it is just going to depend on what my boater is wanting to do,” Guinn said.

“I didn’t have a single bite until about 10 this morning,” Guinn said. “As soon as the sun came out though, the fish started setting up right. I caught two back-to-back and it really got me going for the rest of the day.”

Guinn hails from more than 700 miles away from Hot Springs and Lake Hamilton. Although the distance may be far, the Palmetto State co-angler says that he feels right at home in the Ozarks because of Hamilton’s characteristics.

“Just like our lakes back home, Lake Hamilton has threadfin shad,” Guinn said. “There’s also a ton of docks and offshore brush piles. Learning how to skip docks really helps fishing here because when the sun is out here, these fish love to set up under those docks.”

The Top 10 Strike King co-anglers advancing to the final day of competition at the All-American on Lake Hamilton are:

Finishing in 11th through 49th are:

The full field of 49 boaters and 49 Strike King co-anglers competed on Days 1 (Thursday) and 2 (Friday) of the event. Now, after two days of competition, the field is cut to just the Top 10 boaters and co-anglers based on two-day total cumulative weight, and the final 10 anglers compete tomorrow on Championship Saturday. The boater and co-angler that catch the heaviest three-day total weight will be crowned the 39th Phoenix Bass Fishing League All-American Champions.

The final 10 boaters and Strike King co-anglers will launch Saturday morning at 6:30 a.m. CT from the Andrew Hulsey Fish Hatchery, located at 350 Fish Hatchery Road in Hot Springs. Saturday’s Championship weigh-in will be held at the launch location and will begin at 2:30 p.m. Fans are welcome to attend Saturday’s launch and weigh-in events and encouraged to follow the event’s online coverage at MajorLeagueFishing.com.

The 2021 Phoenix Bass Fishing League Presented by T-H Marine was a 24-division circuit devoted to weekend anglers, with 128 tournaments throughout the season, five qualifying events in each division. The top 45 boaters and Strike King co-anglers from each division, along with the five winners of the qualifying events, advanced to one of six Regional Championships where they competed to finish in the top six, which then advanced them to compete in the Phoenix Bass Fishing League All-American.