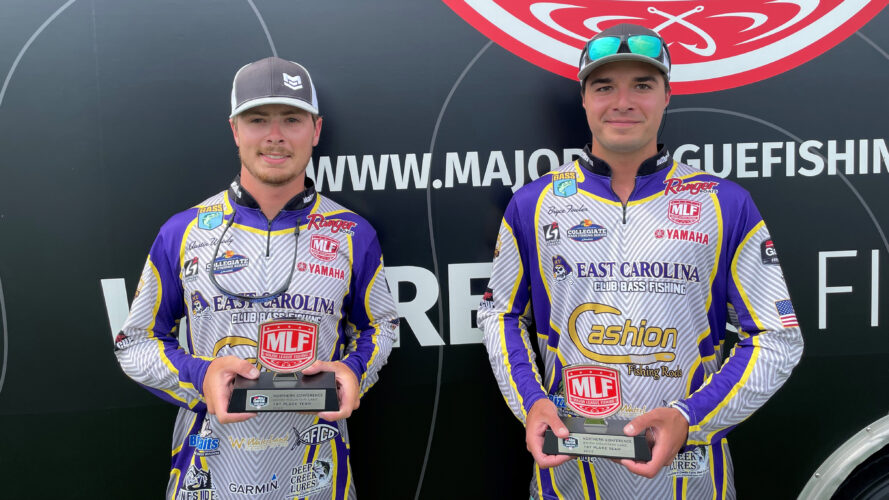 “We came into this with no practice,” Fowler said. “We talked about it, and we just wanted to come into it and see what happened. We knew how to fish it and knew what they were going to be doing; we just had to make it all come together.

“We fished around a bit, and about noon we had a limit of 12 or 13 pounds,” Fowler said. “We were able to throw a topwater on rock piles to catch four fish over 4 pounds.“

Fowler said the team focused on rocky banks and rock piles around the Blackwater River area and caught about 30 fish during the day, 15 of which were keepers.

“This feels pretty incredible,” Fowler said. “To do it as seniors and leave a legacy for our team is special.”

MLF College Fishing teams compete in three regular-season tournaments in one of five conferences – Central, Northern, Southern, Southeastern and Western. The Top 10 teams from each division’s three regular-season tournaments and the Top 20 teams from the annual Abu Garcia College Fishing Open will advance to the following season’s National Championship. The 2022 MLF Abu Garcia College Fishing Presented by YETI National Championship Presented by Lowrance will be held on Fort Gibson Lake in Wagoner, Oklahoma, March 29-31, and is hosted by the Wagoner Area Chamber of Commerce.