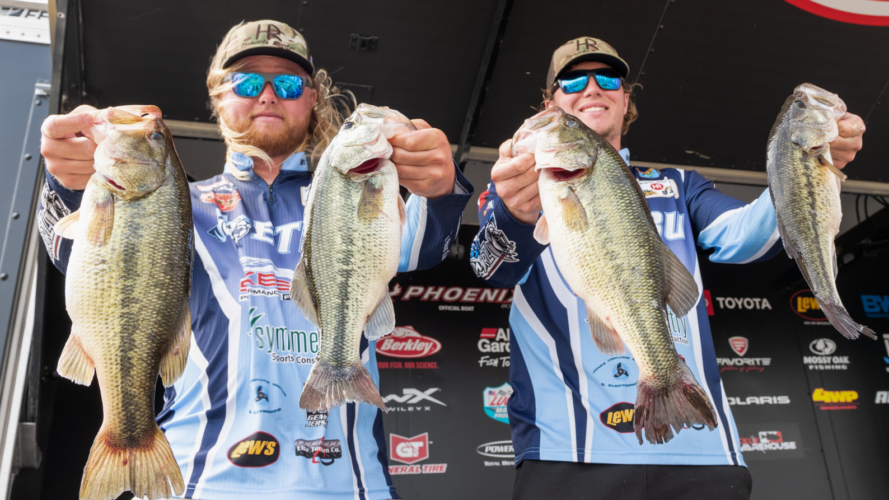 After a blustery start to the day, competition on Day One was shortened by an hour due to high winds in the forecast; however, that didn’t seem to put much of a damper on the outcome for the young anglers in the top position.

“The numbers on the scales made it seem like we smashed them, but it was pretty tough,” Ragsdale said. “It was a grind, and the wind blew us around a lot. I think the key difference is that we were able to get out of the wind, then just stayed in one area and really pounded it. It took us 20 to 40 minutes sometimes, making the same cast over and over again, just to get a bite. There were some fish here and there that just happened to be the right ones today.”

“We fished a lot of transition banks, where there were fish that wanted to move up but with the water and weather changing, they don’t know really where they want to be,” Proffitt said. “They are kind of staging in areas in front of where they are going to be spawning.”

The pair started the morning on the south end of the lake, where they caught two fish, before spending the rest of the day down in Long Bay. As for experience on the fishery, Ragsdale said he’d only fished on Fort Gibson Lake once before, in the summertime, under completely different conditions.

“When I was younger, I spent a little time fishing on Lake Texoma, and this lake feels a lot like that, so I’ve used a few things that I learned there,” Ragsdale said. “Mostly though, we are just fishing things that make sense, areas where fish can sit and be comfortable, whether the water is going up or down, and the water isn’t going to run off of them – steeper banks, things like that.”

The senior business administration majors said they only caught five keepers today, landing the last one only 35 minutes before they had to check in, but they were thankful those five had the numbers to keep them on the top of the leaderboard.

When asked their expectations for tomorrow, Ragsdale responded, “I think we can duplicate what we did today, but we could also zero. It’s one of those weeks that if we get the bites, we get them, but it probably won’t be a slugfest.”

“I think most of the fish we are around are good quality fish, so if we are fortunate enough to get five bites again, there’s a good shot that we’ll have another good bag in the 12- to 14-pound range,” Proffitt said.

The full field of 176 teams compete on Tuesday and Wednesday, with only the Top 10 – based on two-day cumulative weight – advancing to Championship Thursday. The National Champions will be crowned Thursday based on the cumulative three-day weight total.

The Top 10 teams after Day One on Fort Gibson Lake are:

Anglers will take off from Taylor’s Ferry North, located on Dock Road in Wagoner at 7 a.m. CT each day of competition. Weigh-ins will be held at Taylor’s Ferry North starting at 3 p.m. and will be live-streamed daily. Fans are welcome to attend the event or tune in to the weigh-in and follow the online coverage at MajorLeagueFishing.com.