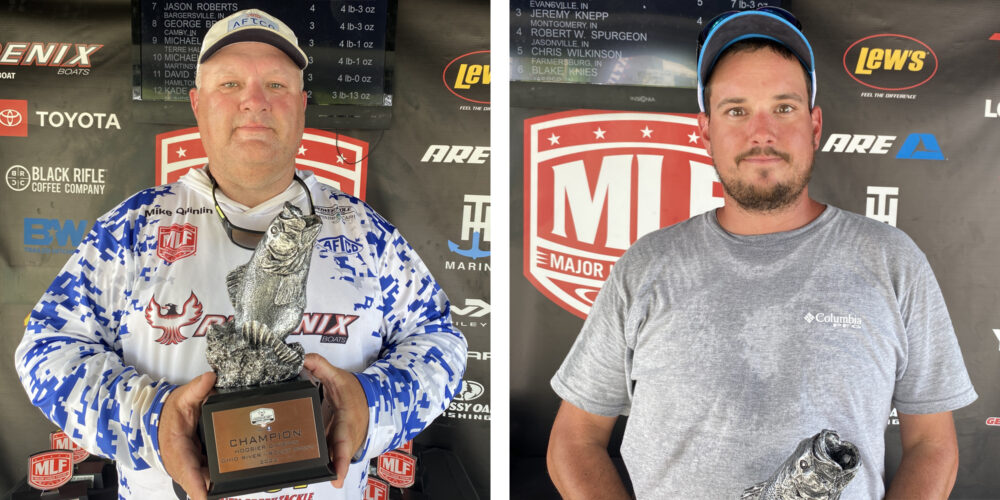 “I fished the weekend before the tournament and did no good – just one keeper,” Quinlin said. “But during the tournament I fished the exact same way and managed to put them in the boat. I ended up catching a lot of fish on a tough day, flipping wood stumps and laydowns in about 2 feet of water.

“I tried throwing a buzzbait early, but they just wouldn’t eat it,” Quinlin said. “But they would eat the spinnerbait, which is unusual for the river.”

Quinlin said he fished the Deer Creek area of the river as well as another creek upriver of takeoff at Rocky Point Marina Saturday to boat 11 keepers. He said the main river was unfishable due to heavy rains recently in Kentucky, but he relied on years of fishing experience to take home the trophy.

Quinlin now has five BFL titles under his belt. His first BFL win also came at Ohio River-Rocky Point in 2001.

“Back in 2001 a buddy of mine talked me into fishing a tournament in the Bass Fishing League,” Quinlin said. “It was the biggest tournament I had fished at that time, and I said, ‘I’ll try this one time and see what happens.’ And it just so happens I won it.

To make the win even more special, Quinlin said he had sold the Phoenix boat he had used last year and just purchased a new Phoenix boat. He had not gotten a chance to take it out before the tournament.

“The tournament was my first day in my new boat,” Quinlin said. “I hadn’t even started it yet. I just took it out real slow and babied it. And everything worked out just perfect.”

Quilin’s Phoenix boat he purchased qualified him for the Phoenix MLF Contingency Bonus and added $7,000 to his tournament winnings.

Knies had a bass that weighed 4 pounds, 13 ounces that was the heaviest of the event in the Boater Division and earned the day’s Berkley Big Bass Boater award of $540.

Powell caught the largest bass in the Co-angler Division, a fish weighing in at 2 pounds, 11 ounces. The catch earned him the day’s Berkley Big Bass Co-angler award of $260.