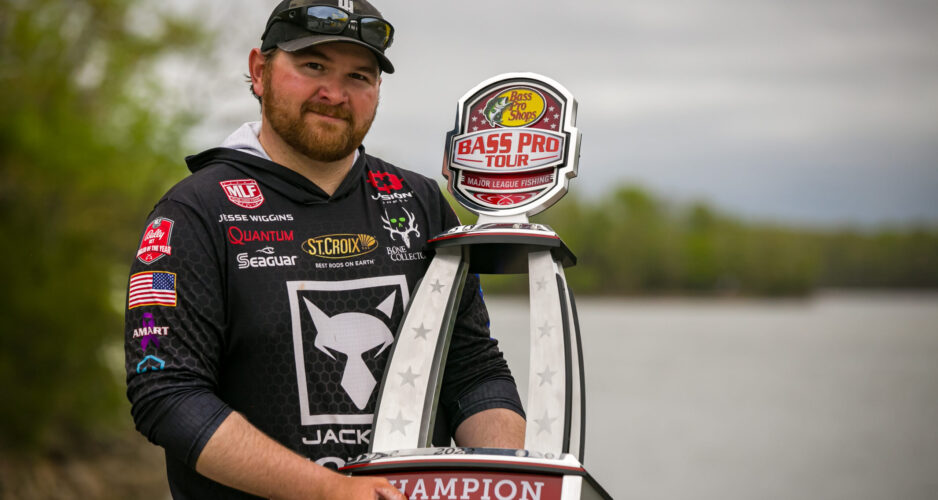 Link to Photo Gallery of Best Shots from Championship Day

Link to Video of Fish Catch Highlights from Day 6

“Oh my gosh,” said an emotional Wiggins as time expired. “I’m shaking, my videographers shaking, my official is shaking – we’re freaking tore up. I’m just a redneck from Alabama that likes to fish and loves to throw a shaky-head.

“I get here, and the banks look identical to Smith Lake. I mean, identical. And the fish set up identical. It seemed like I could call my shot, all week long.”

Wiggins spent the tournament targeting boat docks with a homemade shaky-head rig. After winning the Group A Qualifying Round, he advanced directly into Thursday’s Championship Round.

“I did exactly what I wanted to do, all week,” Wiggins said. “I grew up throwing a worm – that’s all we did. And we finally get a lake where they’re spawning and they’re biting the shaky-head. When they’re on that thing, I feel like I can win.”

Wiggins’ shaky-head rig was homemade – he fished both a 1/8-ounce and a 3/16-ounce – and he credited his key bait as being a watermelon-candy-colored Jackall Flick Shake worm.

“I always throw my shaky-heads on my 7-foot, 1-inch extra fast St. Croix Legend Elite rod – medium-heavy – with a Quantum Smoke S3 reel,” Wiggins said. “My line was Seaguar – Smackdown 30-pound braid and a 12-pound (Seaguar) Invisx leader. I worked with 12-pound because the water was dingy, and I was throwing it mainly around docks and cables.

“To come away with a win, first place against these guys – Lord have mercy, I can’t even put it into words,” Wiggins said. “My support system back home – they all sacrifice so much. My wife Haley, River, my mom, Haley’s mom, Haley’s sisters, my grandma, my brothers – it’s crazy how much they sacrifice just for me to come out here and chase these things. I am so happy to win this for them. I can’t wait to bring this trophy back home to Addison.”

The Top 10 pros from the Bass Boat Technologies Stage Four on Lake of the Ozarks Presented by Bass Cat finished:

General Tire pro Mark Rose earned Thursday’s Championship Round $1,000 Berkley Big Bass award – his second Big Bass Award of the event – with a 4-pound, 9-ounce largemouth that bit a Strike King Finesse jig in Period 1. Brookeland, Texas, pro Dakota Ebare earned the $3,000 Berkley Big Bass award for the overall largest bass of the event with his 6-pound, 14-ounce largemouth that he weighed on Day 1 of competition.

The Bass Boat Technologies Stage Four on Lake of the Ozarks Presented by Bass Cat featured anglers competing with a 2-pound minimum weight requirement for a bass to be deemed scorable. Minimum weights are determined individually for each competition waters that the Bass Pro Tour visits, based on the productivity, bass population and anticipated average size of fish in each fishery.

The Bass Boat Technologies Stage Four on Lake of the Ozarks Presented by Bass Cat was hosted by Central Missouri’s Tri-County Lodging Association, the Lake of the Ozarks Fishing Council and BassingBob.com. The event showcased 80 of the top professional bass-fishing anglers in the world competing for a purse of $805,000, including a top cash prize of $100,000 to the winner.

Television coverage of the Bass Boat Technologies Stage Four on Lake of the Ozarks Presented by Bass Cat will premiere as two two-hour episodes at 7 a.m. ET, on Saturday, Oct. 15 and Saturday, Oct. 22 on the Discovery Channel. New MLF episodes premiere each Saturday morning on the Discovery Channel, with additional re-airings on the Outdoor Channel. Each two-hour long reality-based episode goes in-depth to break down each day of competition.