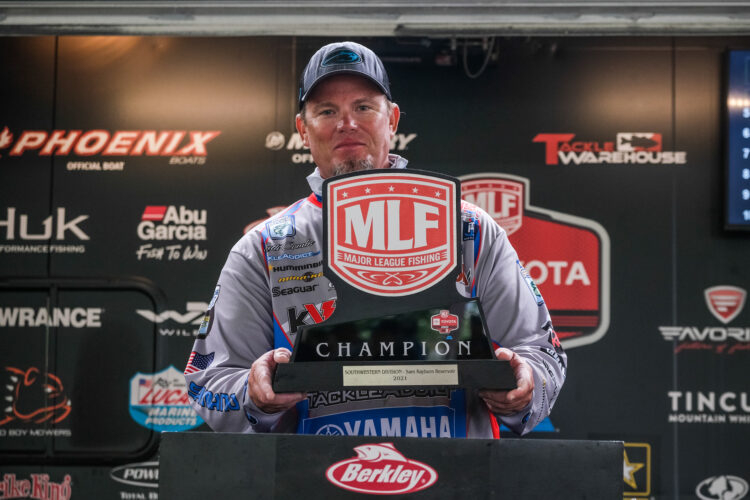 BROOKELAND, Texas – Pro Keith Combs of Huntington, Texas, brought five bass to the scale Friday weighing 10 pounds, 15 ounces to go wire-to-wire and win the Toyota Series presented by A.R.E. at Sam Rayburn Reservoir Presented by Berkley. Combs weighed in 15 bass over three days of competition totaling 63 pounds, 3 ounces, earning the win by an 8-pound, 10-ounce margin over second-place angler Josh Bensema of Willis, Texas. For his victory, Combs earned the top payout of $36,764 in the third and final regular-season tournament of the 2021 Toyota Series Southwestern Division.

Combs said it was actually his first win of any kind on Sam Rayburn, which was surprising considering his Huntington, Texas, address, and his years as a top-level pro angler.

“I’ve fished very few tournaments and not had a top 10 or 15 on this place,” said Combs. “I’ve finished second and third, but never won one. That was fun, I always wanted to.”

Weighing 22-9 on Day 1 and 29-11 on Day 2, Combs staked himself to a lead of more than 17 pounds heading into the third and final day. After a weather delay at takeoff that lasted more than 2 hours, Combs was forced to scramble a bit Friday to make sure of the win.

“The first couple days were really easy, but today we just didn’t have enough time,” said Combs. “I went to try to catch a couple big ones, but I had to just catch some fish. I would have loved to have had a full day to go out and stand on ‘em and try to catch a big bag again. They’re definitely there.”

On the first two days, Combs did what he’s famous for – catching big bass offshore.

“I stayed out, I cranked, I threw a big spinnerbait and a big swimbait,” said Combs. “I fished a lot of different spots, some of them were shallow, 4- to 6-foot. Some of the fish I’ve caught this week have been as deep as 16.

“There’s just not many fish out there. I had a good bag the first day and moved around and checked on a bunch of places. I felt like if I stayed out all day and fished for those big ones, I’d have a chance to catch five. Thursday, I stayed out all day, and I only caught seven fish, but the smallest one was a 4-pounder.”

On Day 3, Combs ended up altering his strategy and put a jerkbait and a crankbait in hand to nab a limit.

“Friday I just went and caught schooling fish on a little gravel bar,” said Combs. “It has a ton of 2- and 3-pounders. I hadn’t fished there all week, but I felt like I just needed to go catch a limit of fish today, so that’s what I did.”

Combs said he targeted a mix of hard spots on points and flats and isolated stumps. For the stumps, he could often pull up and make just a handful of casts, but he found himself fishing around a little more on the other offshore areas.

“I used my Humminbird MEGA 360 a lot. The stumps I know about, but a lot of the stuff was real big flats, and main lake points,” said Combs. “I would pull up, and I could look at 360 and fish around, and eventually you might see a fish or two. Then at least I knew which direction to throw. They’re big areas, so it was very important to run that this week.”

For his baits, Combs said he used a big single swimbait, a 1-ounce Strike King Bottom Dweller Spinnerbait in blue glimmer, a Strike King Magnum Squarebill 4.0 in Tennessee shad and a Strike King 6XD in chartreuse and blue.

With his fourth-place finish in the Southwestern standings and his win, Combs is now qualified for the Toyota Series Championship this fall on Pickwick Lake. From the sounds of it, he’s going to be a handful.

“I’m excited about that,” said Combs. “That’s a big money tournament. It’s pretty good to get an opportunity to fish for that kind of money. To me, it’s pretty incredible to fish for that kind of jack without having to spend $50,000 in entry fees. I think it will be a really good tournament. I got the opportunity to see what really lives in Pickwick when we were there for the Elites, and I know it will be tougher in the fall, but I think I’ll get a lot of practice time and I’m excited about it.”

Results for the remainder of the field can be found at MajorLeagueFishing.com.

Despite the successful tournament on Sam Rayburn Reservoir, the fishing community was deeply saddened on Thursday after an accident at the event claimed the life of a co-angler. Major League Fishing (MLF) announced Friday that the identity of the co-angler that died after falling from the boat had been released. The Texas Parks and Wildlife Department (TPWD) confirmed that co-angler Pete Lammons of Houston, Texas, fell overboard near the San Augustine Park area. Attempts to rescue Lammons were unsuccessful. Lammons was an experienced co-angler, competing in his 57th career MLF event. He was also a former NFL football player, who played tight end for the New York Jets from 1966-1971, including winning the AFL Championship with them in 1968 and Super Bowl III in 1969.

The 2021 Toyota Series Presented by A.R.E. consists of six divisions – the Central Division Presented by Neat Companies, Northern, Plains, Southern, Southwestern and Western – each holding three regular-season events, along with the International division. Anglers who fish all three qualifiers in any of the six divisions and finish in the top 25 will qualify for the no-entry-fee Toyota Series Presented by A.R.E. Championship for a shot at winning $235,000 cash, including a $35,000 Phoenix MLF BIG5 Bonus for qualified anglers. The winning Strike King co-angler at the championship earns a new Phoenix 518 Pro bass boat with a 115-horsepower Mercury outboard.