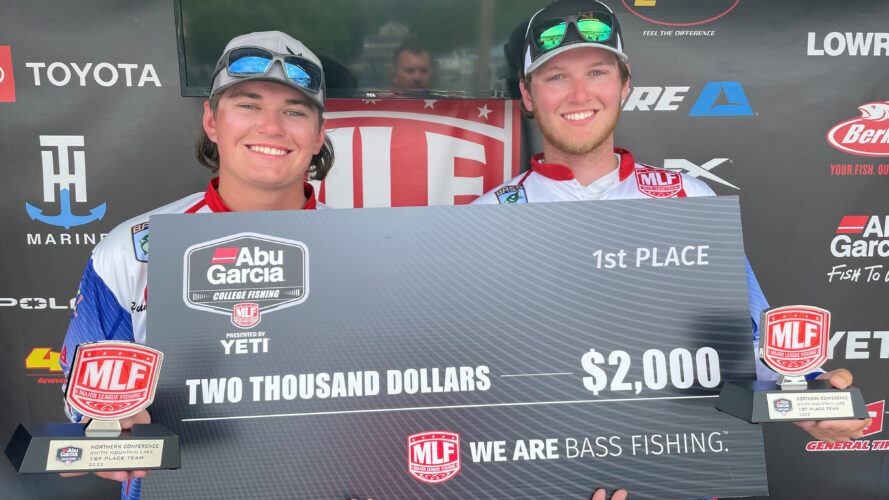 “Our day started with a discussion at the ramp about if we were going to try to just go catch a limit or just go fish for the big bite,” McClaskey said. “About 10 seconds before blastoff we looked at each other and said, ‘Let’s just go fish big.’ And 27 minutes later, Landon caught one that weighed 6-12. We had a limit of 18½ pounds by 9:45 (a.m.).”

McClaskey said the team fished near the Crazy Horse Marina area and targeted bass they could see holding on docks by casting swimbaits – a shad-colored 6-inch Megabass Magdraft Swimbait and a KGB Chad Shad. McClaskey said their deepest fish came from docks in only five feet of water.

“At 1:53 (p.m.) we were fishing a dock and I was trolling out, and I cast the Chad Shad to the end of the dock, popped it twice, and got the 4-pounder that bumped us up to right at 20 pounds,” McClaskey said. “It was a last-second fish. We had to pick up the trolling motor and run back to weigh-in. I looked at Landon and said, ‘If someone beats us today, they earned it.’

“This win hasn’t set in yet, but already it feels great,” McClaskey said. “We both have come close so many times. This win was a long time coming.”

MLF College Fishing teams compete in three regular-season tournaments in one of five conferences – Central, Northern, Southern, Southeastern and Western. The Top 10 teams from each division’s three regular-season tournaments and the Top 20 teams from the annual Abu Garcia College Fishing Open will advance to the following season’s National Championship. The 2023 MLF Abu Garcia College Fishing Presented by YETI National Championship Presented by Lowrance will be held on Fort Gibson Lake in Wagoner, Oklahoma, March 29-31, and is hosted by the Wagoner Area Chamber of Commerce.