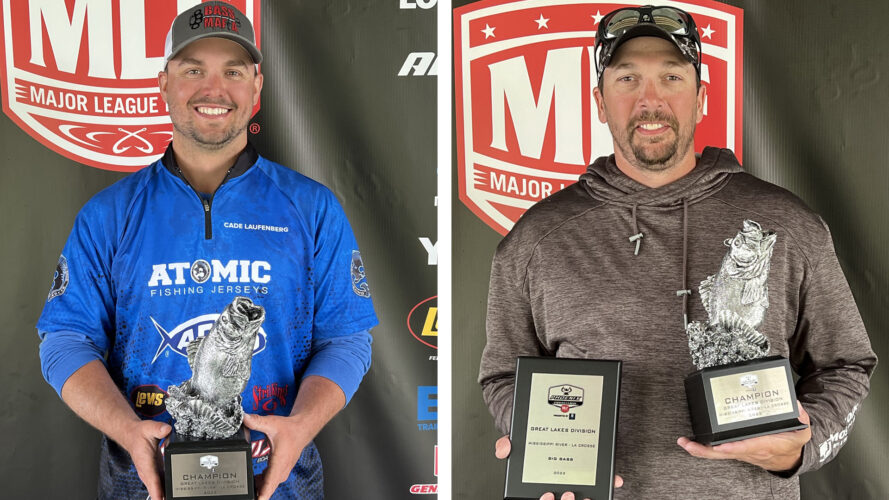 “I had a plan to go catch some largemouth first thing in the morning, and I got to my spot and there was another boat on it,” Laufenberg said. “So, I had to turn around and make a 20-minute boat ride all the way back to where I came from.

“I basically had to start my mindset all over,” Laufenberg said. “I had three rods rigged for largemouth on my deck, and I had to put those away and get my smallmouth rods out.”

Laufenberg said he had two fish in the livewell when his co-angler caught a 5-pound smallmouth, and he became excited thinking he had figured out a way to post a big tournament bag. Laufenberg said he relied on a green-pumpkin Strike King Rage Twin Tail Menace Grub fished on a 1/8-ounce jighead to target the smallmouth. He said he fished the grub out of current and cast toward the bank to focus on fish in all three stages of the spawn – prespawn, spawning and postspawn. Laufenberg said he caught 40 to 50 fish during the tournament, 20 of which were keepers.

“Once my co-angler caught that big fish it gave me the confidence to stick with the smallmouth and hop from place to place and pick one off here and there,” Laufenberg said. “Then I lucked into a bonus largemouth – a 3¾-pounder – that was the biggest fish of the day. It was a day that didn’t start the way I wanted it to, but it led me down a winning path.

“It was one of those days you hear about that when it’s your time to win, it’s your time to win, and you can’t really stop it,” Laufenberg said. “This is my hometown, and there are a lot of really talented locals who fish in these events, so when you are able to be the best on any given Saturday in a BFL tournament, you really have an accomplishment.”

Joseph Vazquez of Oak Forest, Illinois, had a fish that weighed 4 pounds, 11 ounces that was the heaviest of the event in the Boater Division and earned the day’s Berkley Big Bass Boater award of $575.

Swanson caught the largest bass in the Co-angler Division, a fish weighing in at 5 pounds even. The catch earned him the day’s Berkley Big Bass Co-angler award of $287.