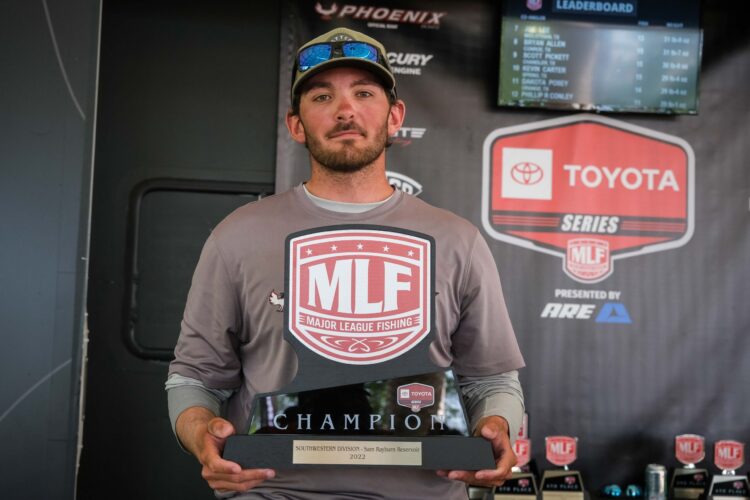 The three-day bass fishing tournament, hosted by the Jasper-Lake Sam Rayburn Chamber of Commerce, was the third and final event of the regular season for the Toyota Series Southwestern Division Presented by Outlaw Ordnance.

Heck moved to Sam Rayburn two years ago to dedicate himself to becoming a professional angler. He’s spent 4 to 5 days a week out on the lake graphing and learning all it’s nuances. So, he’s put in the time, and Friday, it showed.

“This feels amazing,” Heck said after the win. “I moved out from California to do this, for moments like this. So, it’s crazy it happened. Crazy [to beat Combs]. I mean, I fished with him on the final day of a B.A.S.S. Open as a co-angler a couple years ago, and I won that event. So, it was crazy to be back up on stage with him and to pull this thing off.”

How he was doing it was how many others this week found success – targeting brush piles and hard spots right at the mouths of spawning areas – the first areas the big girls would transition to on their way out from the shallows.

The areas weren’t technically deep, offshore places, but they weren’t close enough to the bank, either. Just 40-50 little sweet spots that Heck would check with his Garmin LiveScope to see if fish were suspended above the piles.

If the fish were there and shot off the bottom when he cranked his Strike King 5XD over their heads, he knew he was going to catch them. Be it on the crankbait, a Roboworm Straight Tail Worm (mean green) on a drop-shot or a rare 6-inch swimbait. However, if they didn’t, they’d just follow his lures in, which is unfortunately what happened a lot on Friday.

“Today, the fish were more in the brush piles with the high sun,” Heck said. “Yesterday’s clouds had them roaming around a bit more off to the sides of the brush piles, which made it better for me.”

Considering he figured it would take 25 pounds to beat Combs, his 18-1 bag had him truly feeling he’d come up short. That is, until he got the surprise he’d dreamed of for two years.

“My heart is still pounding so much,” Heck said while holding the trophy. “I mean, I 100% felt I needed 25 pounds. Keith is a hammer. So, this is just crazy.”

The Day 1 Berkley Big Bass $150 award winner in the Strike King co-angler division, was Donny Davis of Livingston, Louisiana, with a 6-pound, 12-ounce bass, while the Day 2 $150 award went to Justin Overstreet of Poolville, Texas, who weighed in a 7-pound, 2-ounce largemouth.

The next event for Toyota Series anglers will take place May 19-21 – the Toyota Series Presented by A.R.E. at the Harris Chain of Lakes in Leesburg, Florida. For a complete schedule, visit MajorLeagueFishing.com.