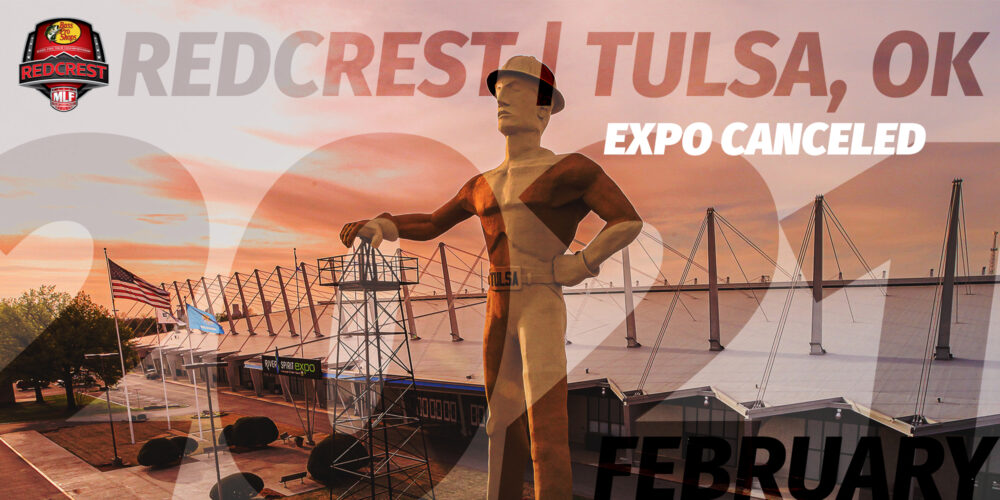 While the 2021 REDCREST Expo may be canceled, the championship on Grand Lake O' the Cherokees will proceed as scheduled.
November 24, 2020 • Joe Opager • Press Releases

TULSA, Okla. – Major League Fishing announced today that the REDCREST 2021 Outdoor Sports Expo, scheduled to be held February 26-28, 2021 in Tulsa, Oklahoma, has been canceled. REDCREST 2021, the MLF Bass Pro Tour Championship, will proceed as scheduled on Grand Lake O’ the Cherokees showcasing the Top 40 Bass Pro Tour anglers from the 2020 season competing for the REDCREST title and the top prize of $300,000.

In addition to the cancellation, MLF also announced that Tulsa and the River Spirit Expo Square will host the REDCREST 2022 Outdoor Sports Expo on March 25-27, 2022. Competition will again be held on Grand Lake.

MLF officials remained in close contact with VisitTulsa and the Tulsa Sports Commission – divisions of Tulsa Regional Tourism – throughout the year in planning for the 2021 event. Mounting uncertainty due to the ongoing COVID-19 pandemic, combined with travel restrictions and a guest capacity reduction at Expo Square has rendered continuing with the Expo inadvisable. MLF expects the decision will help exhibitors, attendees and sponsors plan accordingly.

“The past eight months has challenged everyone, including our industry and sports events in general. This proactive decision will allow our partners enough time to plan accordingly for 2021,” said Michael Mulone, MLF Senior Director of Events and Partnerships. “The decision to cancel the expo is a tough one, but we believe it is the right one. Every week we had to expand the show floor plan because of demand, and we expected to sell out the entire facility. Now, with more than a year of lead time, we are already looking ahead to REDCREST 2022.”

The REDCREST 2021 Outdoor Sports Expo had been a much-anticipated event and was expected to be a big win for the local Tulsa economy. In addition to the sponsors, exhibitors and media, tens of thousands of fans were expected to converge on Tulsa and the Northeastern Oklahoma area.

“We are disappointed that the Major League Fishing REDCREST Championship Expo is being postponed due to the lingering pandemic. We are partnering with all involved parties to prioritize the safety of event participants and the right decision is to postpone,” said Ray Hoyt, President, Tulsa Regional Tourism. “This event is expected to deliver millions of dollars in total economic impact for the region, and we look forward to hosting this world-renowned event in the Tulsa area in March 2022.”

“While the cancellation of the REDCREST 2021 Expo is disappointing, it is a decision that we understand and fully support,” said Gary Lancina, Senior Director of Marketing at Mercury Marine. “We will certainly miss the public interaction and activation, but are committed to the safety and well-being of the fishing community. We look forward to a great 2021 REDCREST competition and anticipate the excitement of an Expo as part of REDCREST 2022.”