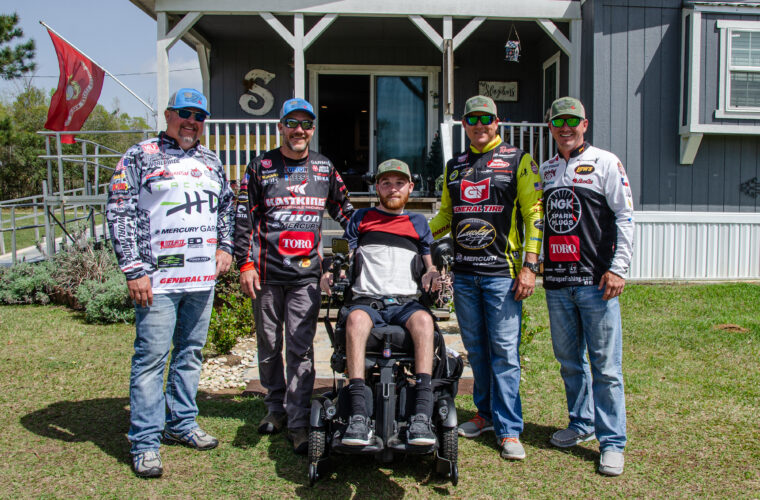 While 40 Major League Fishing (MLF) Bass Pro Tour anglers were out competing on Sam Rayburn Reservoir Tuesday, the real work was taking place off the water. Toro-sponsored anglers Brent Chapman and Jeff Sprague were joined by fellow pros Skeet Reese and James Watson for a “Spring Clean Up” event at the residence of local Jasper resident, Kamron Slaydon.

Slaydon was raised in Jasper, Texas, and graduated from Jasper High School in 2018. Immediately after graduation, Slaydon joined the U.S. Marine Corp and committed his life to serving our country. However, in January of 2019, while at home in Jasper while on leave, Slaydon was severely injured in an accidental shooting which damaged his C4 and C5 vertebrae, resulting in him being a quadriplegic.

Since the accident, Slaydon has spent the last two years doing everything possible in an effort to regain his independence. He has visited multiple physicians, therapists and specialists and spent hundreds of hours doing numerous different treatments and therapies. Slaydon and his family are raising money to help with the expense of an epidural stimulator to help him regain as much mobility as he can in his upper and lower extremities.

When the MLF anglers learned of Slaydon’s story, they immediately wanted to do something to help. Sprague and Chapman called in a few favors and the idea for a “Spring Clean Up” event was born. Sprague and Chapman recruited their fellow competitors, Reese and Watson, and arranged for Toro distributor, Professional Turf Products and a local Toro dealer, Scooter’s Lawnmower in Beaumont, Texas to allow them to use the equipment. The group of anglers spent a few hours on their day off Tuesday doing yard work for the Slaydon family, mowing, trimming and blowing the entire residence.

“We wanted to do something to give back, and this is one of those things that maybe doesn’t seem like much, but it’s one of those chores that just needs to get done and we were more than happy to come out here and meet Kamron and do some yard work for him and his family,” Chapman said.

“It was great for Toro to step up and help out the way they did today, and their equipment made the job quick and easy,” Chapman continued. “We are incredibly lucky to be able to fish for a living, so the least we could do on our day off is to come out here and give back a little bit and thank Kamron for his service to our country.” Sprague manned the Toro Z Master 4000 MyRide zero-turn mower, while Chapman trimmed the entire property with a Toro 60V Battery String Trimmer. Reese was assigned the Toro 22-inch Recycler All-Wheel Drive walk-behind mower and Watson was given the Toro 60V Battery Leaf Blower to clean up the trimmings around the house, because “Watson is used to blowing a lot of hot air,” Sprague joked. The clean-up event took about two hours and when the anglers were finished the Slaydon family was grateful.

“It really means a lot just for someone to reach out and want to help, and then to show up and be such a great help and great conversation,” Slaydon said. “I enjoyed meeting the guys and talking about hunting and fishing, and they cleaned up our yard quickly and efficiently.”

“Words are powerless to express my appreciation,” said Jodi Slaydon, Kamron’s mother. “For the guys to take their day off and come out to show support for Kamron was amazing to witness. I think Kamron’s heart was full of gratitude and appreciation and he can’t wait to watch these anglers succeed on the water.

“Kamron has always worked hard to achieve the goals he has set for his life, and so many have already been accomplished. He’s a determined young man, full of positive vibes and strong in his faith. With a little help and support from friends, family and people like y’all – there will be no limit to his achievements. We are very thankful.”

As a thank you to Slaydon for his service, the anglers donated a jersey autographed by many of the anglers competing in the Bass Pro Tour event at Sam Rayburn. The Slaydon family has a few upcoming fundraising events scheduled to help raise money for their medical expenses, so a second jersey was donated to raise money for their silent auction, and the semi-local Sprague donated a four-hour fishing trip on an East Texas fishery on behalf of Toro, also to be auctioned off.

“Even though we were working, we had a lot of fun today,” said Sprague. “The strength that Kamron has, and his perseverance to get through the obstacles that life has thrown at him are truly inspirational. My hat goes off to that young man and his family and I am grateful that we had the opportunity to give back a little bit and do our part.”

For fans unable to make it to Jasper but still wishing to support Kamron Slaydon and his family, a GoFundMe page has been set up to help raise money for their medical and travel expenses. To donate, visit GoFundMe.com.

“One of the biggest things about my injury is just having the opportunity to overcome something that’s larger than yourself,” Slaydon went on to say. “Hopefully I am able to inspire someone – to overcome this and inspire people that are facing their own struggles. You can overcome things, especially if you put your mind to it.”

For more photos from the “Spring Clean Up” at the Slaydon residence, click here.