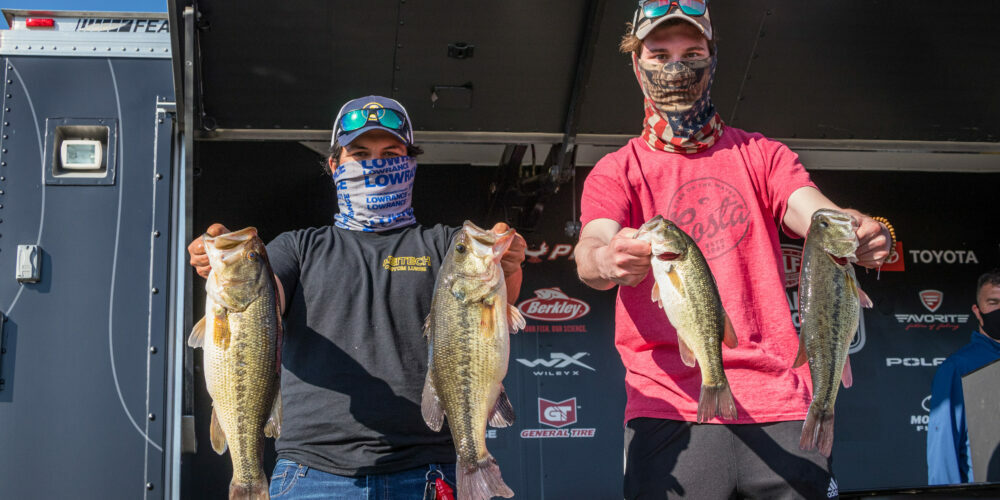 GROVE, Okla. – Zachary Potter of Haddon Township, New Jersey, and Alex Johnson of Milltown, New Jersey, moved into the lead after Day 2 of the 2021 Abu Garcia College Fishing presented by YETI National Championship presented by Lowrance at Grand Lake. The duo brought a five-bass limit to the scale Thursday weighing 17 pounds, 14 ounces, bringing them to the top of the leaderboard after starting the day in ninth place. Their two-day total of 29 pounds, 6 ounces gives them a 2-pound, 3-ounce lead over the second-place team from Murray State University – Zachary Martin of Murray, Kentucky, and Harbor Lovin of Fayetteville, Ohio – who brought a limit to the scale weighing 14 pounds, 8 ounces, bringing their total to 27 pounds, 3 ounces.

Fishing down the lake, the New Jersey duo said they have barely caught a limit both days.

“Both days have been a grind – we had five bites on Wednesday and seven bites on Thursday,” said Johnson. “We are fishing slow in one small area and we know it has the right ones in it. We’ve had two bite windows both days – one in the morning and one in the afternoon – so we are just sitting around in the middle of the day, which is a little mentally taxing, but we’re keeping our head in it.”

Johnson said they are fishing a stretch of gravel bank with scattered wood mixed in and have caught fish off both individual targets and the open bank.

The pair, who had never fished on Grand Lake prior to the tournament, said they caught a couple fish on various lures, but most of their damage was done throwing a jerkbait.

“We aren’t getting a ton of bites, so tomorrow might be hit or miss, but we know the right fish are in that area, so if we just keep our head down and work, we should be able to pull it off,” said Johnson. “With so few bites though, it could easily disappear on us.”

“We just have to grind it out tomorrow and hope for the best,” Potter added.

In their final year of college fishing, the anglers said winning the College Fishing National Championship during their senior year would be an amazing end to their journey.

“Alex and I have fished together the past two years and finished the qualifiers this year with three Top 10’s, so we’re hoping to keep the momentum going throughout this event on Grand Lake,” said Potter.

The full field of 150 teams competed on Wednesday and Thursday, with only the top-10 – based on two-day cumulative weight – advancing to Championship Friday. The National Champions will be crowned Friday based on the cumulative three-day weight total.

The top 10 teams that now advance to Championship Friday on Grand Lake are:

The final 10 teams will launch Championship Friday from Wolf Creek Park, located at 963 N. 16th St. in Grove at 7 a.m. CT. Friday’s championship weigh-in will also be held at the park starting at 3 p.m. and will be live streamed. Due to COVID-19 protocols, attendance is limited to competing anglers, family, essential staff and media covering the event. Fans are encouraged to tune in to the weigh-in and follow the online coverage at MajorLeagueFishing.com.

The 12th annual College Fishing Championship is a three-day event featuring the top 150 college bass fishing teams from across the nation competing in an internationally televised, no-entry-fee tournament for a $33,500 prize package, including a new Phoenix 518 Pro bass boat with a 115-horsepower Mercury outboard.

In addition to the boat package, both members of the winning team and the runners-up at the 2021 Abu Garcia College Fishing National Championship will advance to the 2021 Toyota Series Championship where they will compete as pros for a top prize of up to $235,000. Both members of the third-place team will advance to the 2021 Toyota Series Championship to compete as co-anglers for a shot at winning a $33,500 Phoenix 518 Pro with a 115-horsepower Mercury outboard.

The Abu Garcia College Fishing presented by YETI National Championship presented by Lowrance at Grand Lake is hosted by the Grove Convention and Tourism Bureau.

National television coverage of the Abu Garcia College Fishing presented by YETI National Championship presented by Lowrance will premiere Sunday, July 4, from 8-9 a.m. ET on the Outdoor Channel, with re-airs on the Sportsman Channel and World Fishing Network in the fall.