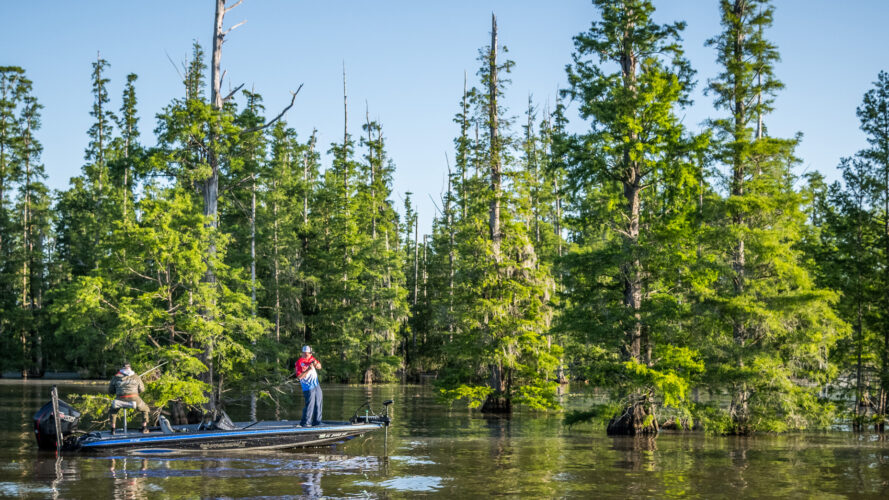 The tournament will feature the region’s best bass-fishing pros and Strike King co-anglers casting for a top prize package of up to $75,000 in the pro division and a new Phoenix 518 pro boat with a 115-horsepower Mercury outboard motor, in the co-angler division.

“This is going to be a fun event to follow,” said Bass Pro Tour angler Anthony Gagliardi, who resides in Prosperity, South Carolina. “Santee is always a little bit ahead of Lake Murray when it comes to the spawn, but I expect we’ll see fish in all three phases. Whether or not the postspawn fish play – meaning targeting the shad spawn – will likely depend on the weather. But it’s a really good fishery and they’re going to catch a lot of big fish down there next week.”

Gagliardi said that although there are certain areas of the lake that are historically good, he expects the majority of the field to be pretty spread out.

“With the two lakes in play – and each are really big – there is a lot of fishable water for sure,” Gagliardi said. “I think we’ll see guys get back into the backwater ponds and some swampy areas up the river, but some will target the big flats on the lower end. The fish also are known to get out into those stump fields as well. Guys are really going to have a lot of options available to them.”

When asked what baits he would be throwing if he was competing in this event, Gagliardi offered a trio of options that he expects to play a role for competitors.

“I’d definitely have a spinnerbait tied on, that’s really good here this time of year. I’d have a frog or some sort of topwater bait, and I’d have a wacky-rig ready to go – something for bed fishing, because there are definitely going to be some spawners caught in this one.”

Anglers will take off each day at 7 a.m. CT from John C. Lane III Landing, located at 4404 Greenall Road in Summerton, South Carolina. Weigh-ins will also be held at the landing, beginning at 3 p.m. on the first two days of competition – Thursday and Friday – and 4 p.m. on Championship Saturday. Fans are welcome to attend and encouraged to follow the event online through the MLF NOW! weigh-in broadcasts and daily coverage at MajorLeagueFishing.com.

The 2022 Toyota Series presented by A.R.E. consists of six divisions – Central, Northern, Plains, Southern, Southwestern and Western – each holding three regular-season events, along with the International and Wild Card divisions. Anglers who fish in any of the six divisions and finish in the Top 25 – or the Top 12 from the Wild Card division – will qualify for the no-entry-fee Toyota Series presented by A.R.E. Championship for a shot at winning up to $235,000 cash. The winning Strike King co-angler at the championship earns a new Phoenix 518 Pro bass boat with a 115-horsepower Mercury outboard. The 2022 Toyota Series presented by A.R.E. Championship will be held Nov. 3-5 on Lake Guntersville in Guntersville, Alabama, and is hosted by Marshall County Tourism and Sports.