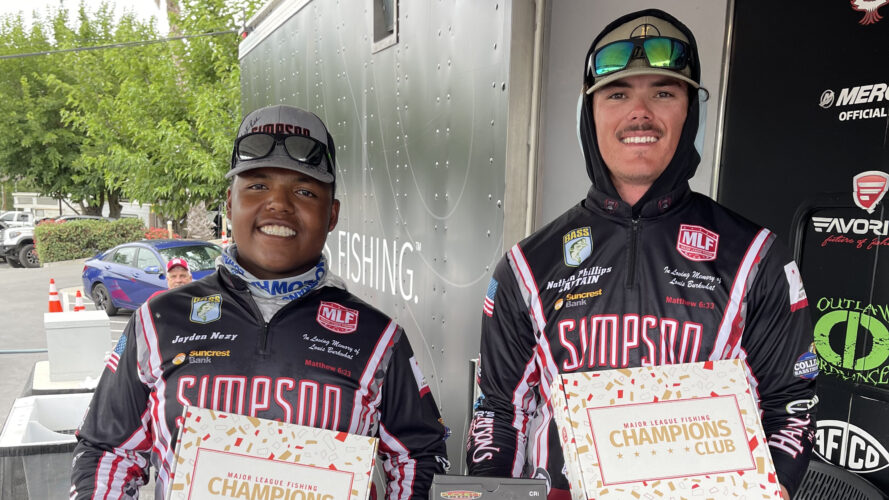 “We just fished the marina all day,” Phillips said. “The game plan was to start there and get maybe a 15-pound limit, then run around that general area the rest of the day and try to cull.

Phillips said he gave those fish a break and moved the team south to chase the tide. After an hour, Phillips returned to their starting spot to fish the outgoing tide and stayed there the rest of the day. Their last fish came at 12:30 p.m.

Phillips said the team relied on a vibrating jig fished in grass and wood on one side of the marina and pilings on the other side. Phillips said Nezy was finesse fishing out of the back of the boat while Phillips focused on parallel casts to targets. Phillips said they caught 15 fish throughout the day – 10 of which were keepers.

“The biggest thing was getting the bait deep enough to the fish,” Phillips said. “I threw a half-ounce bait and fished it pretty slow just trying to get it down to them.”

MLF College Fishing teams compete in three regular-season tournaments in one of five conferences – Central, Northern, Southern, Southeastern and Western. The Top 10 teams from each division’s three regular-season tournaments and the Top 20 teams from the annual Abu Garcia College Fishing Open will advance to the following season’s National Championship. The 2022 MLF Abu Garcia College Fishing Presented by YETI National Championship Presented by Lowrance will be held on Fort Gibson Lake in Wagoner, Oklahoma, March 29-31, 2023, and is hosted by the Wagoner Area Chamber of Commerce.