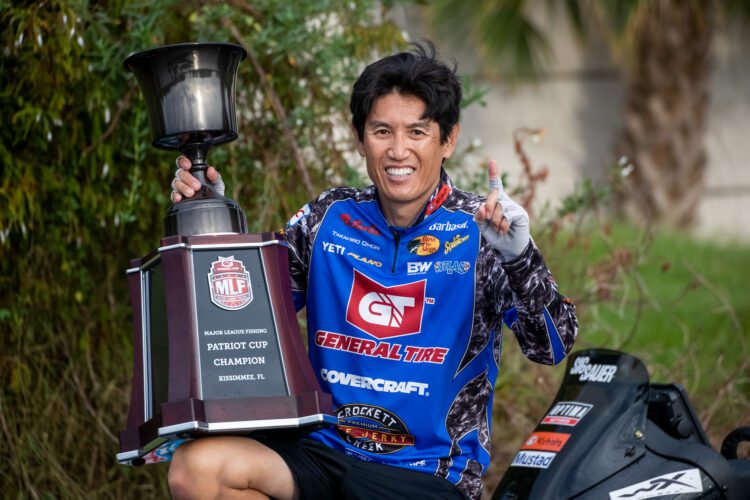 KISSIMMEE, Fla. – Major League Fishing (MLF) pro Takahiro Omori of Tokyo, Japan, caught 16 bass totaling 35 pounds, 11 ounces, to win the Championship Round of the 2021 USAA Patriot Cup Presented by Berkley in Kissimmee, Florida, which premiered Saturday on the Outdoor Channel. The win was the second MLF Cup win in as many years for the Japanese pro, who also claimed the 2020 Wiley X Summit Cup Presented by B&W Trailer Hitches title at Lake of the Ozarks.

Omori said that he did the bulk of his damage on two baits – an unnamed 1.5 squarebill crankbait and a vibrating jig with a swimbait trailer. He fished boat docks, around the bank and in pockets in 3- to 5-feet of water.

“I love shallow-cranking, and I was thinking the conditions were perfect for me,” Omori said. “The 1.5 did it for me. It’s my most trusted bait right now.

“In the final period I come into the back of the creek where the wind was blowing, and I said if this doesn’t happen right here, I’m done. But, it did.”

With two Cup wins under his belt, the veteran Japanese angler now knows that he can excel at the MLF Catch-Weigh-Immediate Release format.

“I wasn’t that good in the beginning. It took me seven years to really understand this format, but now that I do, I love it,” Omori went on to say.

The final eight anglers at the 2021 USAA Patriot Cup Presented by Berkley in Kissimmee, Florida, finished:

Wiggins caught the Berkley Big Bass of the day – a nice 8-pound, 9-ounce largemouth that came on a finesse worm.

Overall, there were 97 bass weighing 192 pounds, 11 ounces caught by the final eight pros during the Championship Round of competition on Lake Bellalago.

The 2021 21 USAA Patriot Cup Presented by Berkley was hosted by Experience Kissimmee and premiered on the Outdoor Channel as six, two-hour original episodes each Saturday afternoon debuting on April 3, 2021, and running through May 8, 2021.

The event was shot over six days in November 2020, in Kissimmee and featured 28 MLF pro anglers competing on three different fisheries across the region, including John’s Lake, Lake Toho and Lake Bellalago. The fisheries are unknown to the anglers – they do not learn where they are competing until they arrive to the launch ramp each morning of competition. For complete details and updated information visit MajorLeagueFishing.com. For regular updates, photos, tournament news and more, follow MLF’s social media outlets at Facebook, Twitter, Instagram, and YouTube.