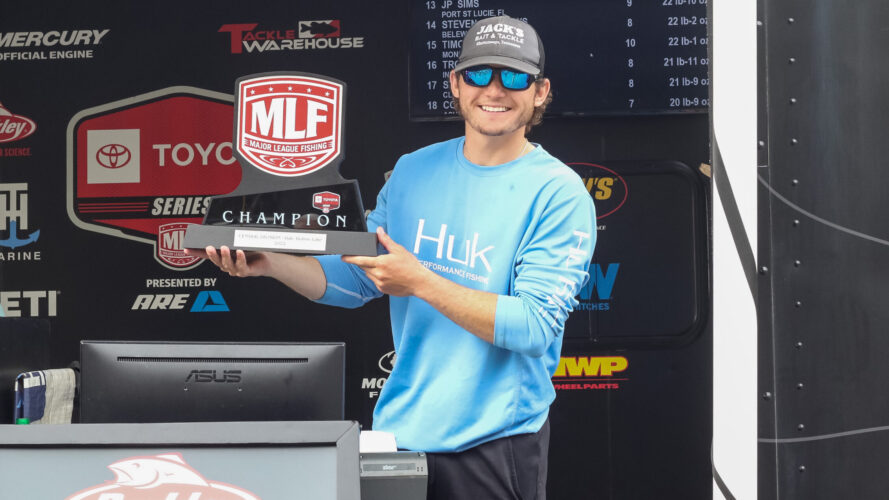 The three-day event, hosted by the Byrdstown-County Chamber of Commerce, was the second event of the season for the Toyota Series Central Division.

“I’m telling you I’m speechless, I really am. I don’t even know what to say. I think it will set in tomorrow, maybe when I drive out of here,” said Williams, laughing and adding, “I know that trophy is going to sleep in the bed with me for the next six weeks, I’m sure.”

Like most of the Top 25, forward-facing sonar and an abundance of bait were critical factors in Williams reaching the final day of competition. He noted that certain characteristics in his primary area along with changing weather conditions affected the movement of baitfish throughout the area.

“All my areas had points and steep drops on each side of them. The bait would load up on points when it got warm and drop off when it got cold into that deeper water.”

Williams targeted Dale Hollow’s schools of fish with a small 3½-inch swimbait rigged on a ¼-ounce jig head. He, like many others, made targeted casts aided by his sonar to specific single fish or pods of fish to initiate strikes.

“The warmer weather made the bait come up and that’s when I’d use a lighter head, with a slower fall to keep it in front of their face,” Williams said.

While Williams was able to notch three bags eclipsing 21 pounds, it wasn’t easy by any stretch. Williams noted that the turning point was his late Day 2 flurry where he culled all five of his keeper fish to jump from roughly 13 pounds to 21-7. That put him in fourth and within striking distance on Day 3.

“It gave me the confidence going into the (final) day,” Williams said. “I caught them late yesterday, and it gave me some confidence. I figured that they would still be there. So, I showed up today and caught a 4-pounder immediately.”

Williams’ area wasn’t on fire immediately after his early morning 4-pounder. But, after bouncing around to a few new areas, Williams was able to put a limit of fish in the boat before jumping his weight up soon thereafter by returning to his primary area.

“It seemed like I needed the wind to get up, so I left,” he said. “I went and caught five, and then when I came back, I started culling.”

Still in shock at taking the top spot, Williams took a moment to reflect on what this meant for him in his young career.

“This is the dream come true. Every fisherman knows it’s not about the money. It’s about winning, and just loving the sport, really,” he said. “And, doing good. I just want to do good as a fisherman, that’s it. If I was to get beat with 21 pounds each day then so be it, hats off to them.”

Kevin Drake took home an extra $1,000 as the highest finishing Phoenix MLF Bonus member. Boaters are eligible to win up to an extra $35,000 per event in each Toyota Series tournament if all requirements are met. More information on the Phoenix MLF Bonus contingency program can be found at PhoenixBassBoats.com.

The next event for Toyota Series anglers will take place on April 7-9 – the Toyota Series Presented by A.R.E. at Santee Cooper in Summerton, South Carolina, hosted by the Clarendon County Chamber of Commerce. For a complete schedule, visit MajorLeagueFishing.com.