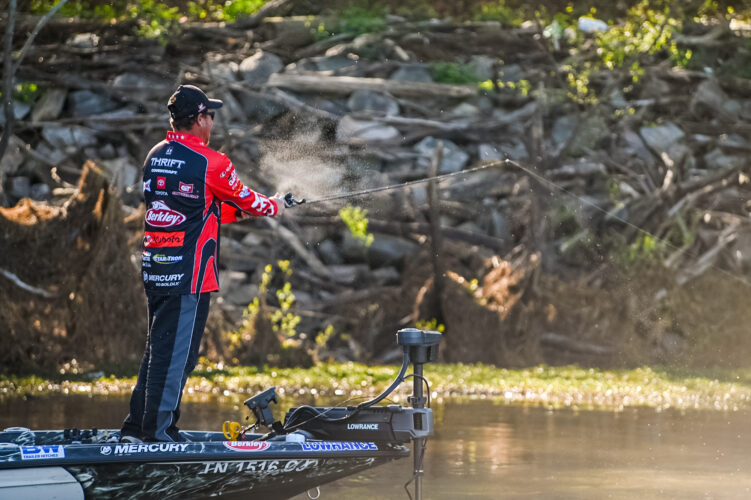 RALEIGH, N.C. – Pro Bryan Thrift of Shelby, North Carolina, caught five scorable bass totaling 17 pounds, 15 ounces to win the two-day Qualifying Group B round Monday at the Major League Fishing (MLF) General Tire Heavy Hitters Presented by Bass Pro Shops. Thrift’s two-day total of 18 bass weighing 62 pounds, 6 ounces earned him the round win by an 11-pound, 14-ounce margin and advances him straight into Wednesday’s final-day Championship Round of competition. The six-day all-star event in Raleigh, North Carolina, showcases 40 of the best bass anglers in the world competing for a purse of more than $535,000, with a top prize of $100,000 going to the winner and Big Bass Bonuses of $25,000, $50,000 and $100,000 being awarded for the single biggest fish in each round of competition.

“It was kind of a long, frustrating day for me,” Thrift said in his post-game interview. “I’ve been stressed out since lines in this morning at 7:30, but luckily I caught enough and now I get to skip the Knockout Round and go straight to the Championship Round to fish for 200 grand, and that is an amazing feeling.”

The fishing on Monday at Falls Lake was different than competitors faced there on Saturday.

“I only managed to get five scorable bites all day,” Thrift said. “The good thing is that it was enough to extend my lead, and I had a little bit of a cushion all day long,” Thrift continued. “My Plan A – a white frog – only got me one bite. Luckily, I had a little backup plan – fishing rockpiles offshore with a Texas rig in 1½- to 3-feet of water, and I ended up catching four bass doing that and kind of saved my day.

“I’m not sure why, but it was a lot different than Day 1,” Thrift continued. “The water came up, and the carp were up spawning and thrashing around in the bushes. I’m not sure if it spooked the bass or what was happening, but I just did the best I could with what we had. I’m so thankful that I had a backup plan with the Texas rig. Hopefully I’ll be able to figure them out again, one more day, on Shearon Harris.”

“I caught one bass Saturday on a soft stickbait, so I knew that they would bite it, but it definitely was not on my radar before the tournament began,” Lefebre said. “A frog got me most of my bites on Day 1 but today with the post-frontal conditions and the bluebird skies, that bite totally died. So, I put down the frog and picked up the stickbait and I am so glad that I did.”

Although Lefebre did not divulge the brand name of his worm, he did offer some tips on how he fished it.

“It was green-pumpkin-colored, with red-and-black flake,” the Pennsylvania pro said. “I like to rough them up before I even take them out of the package, especially when I’m fishing in muddier water. I went to a longer rod, just from my experiences on the first day. These fish swim at you 100 miles per hour when they bite, so I’m just trying to make sure I get that hookset in them and that definitely helped.

“I also went down to a lighter weight – 3/16-ounce – and a smaller 3/0 hook,” Lefebre continued. “I didn’t skimp on the line, though. I stayed up there with the 20-pound test. Overall, I’m really happy about how my day turned out and it was a great day of fishing on Falls Lake.”

With the Qualifying Round now complete, the anglers that finished in 2nd through 10th place from each group advance to Tuesday’s Knockout Round on Shearon Harris Reservoir. The Knockout Round will feature 18 anglers competing to finish in the top eight. Wednesday’s Championship Round will feature Qualifying Round winners Fletcher Shryock and Bryan Thrift, along with the top eight anglers from the Knockout Round competing in a final-day shootout for the top prize of $100,000.

The top 10 pros from Qualifying Group B that now advance to Tuesday’s Knockout Round on Shearon Harris Reservoir are:

Finishing in 11th through 20th in Qualifying Group B are:

Overall, there were 83 bass weighing 268 pounds, 15 ounces caught by 19 pros on Monday, which included one 8-pounder, one 7-pounder, three 6-pounders and two 5-pounders caught from Falls Lake.

The 20 Anglers in Group A competed in their two-day qualifying round on Jordan Lake on Friday and Sunday – the 20 anglers in Group B on Falls Lake on Saturday and Monday. Now, with each two-day qualifying round completed, the anglers that finished in 2nd through 10th place from both groups advance to Tuesday’s Knockout Round on Shearon Harris, while the winner of each group advances directly to Wednesday’s Championship Round on Shearon Harris. In the Knockout Round, weights are zeroed and the remaining 18 anglers compete to finish in the top 8 to advance to the Championship Round. On the final day Championship Round, weights are zeroed and the highest one-day total wins.