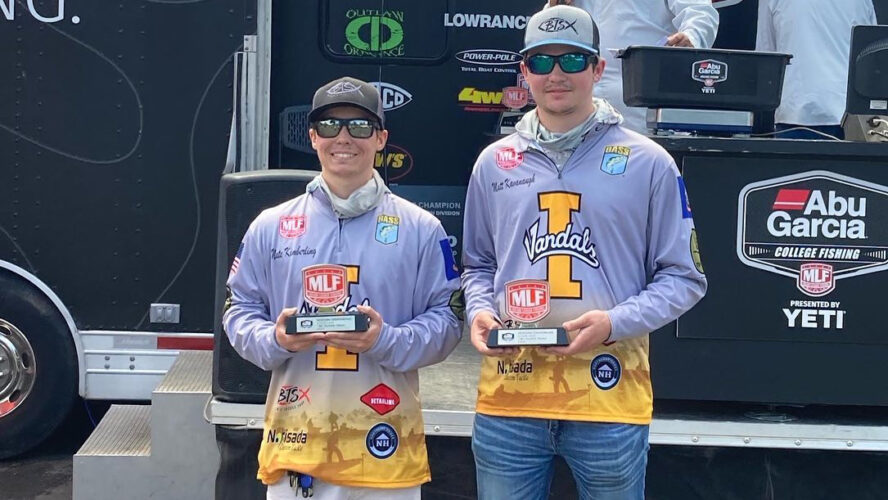 “This win was really cool,” Kimberling said. “We just started this club four months ago and had never fished here before, so to put it together and beat these schools … it really meant something to us.”

Kimberling said the day’s competition started out as anything but typical.

“In the morning we went to fish Monitor Island, and water was blowing us all over and back. I jumped off a 4-pounder on a drop-shot and then a flying goose hit my fishing pole as I was casting. It was a very eventful 10 minutes,” Kimberling said with a laugh.

“After that debacle, we decided to run across the lake to the point across from Monitor Island,” Kimberling said. “We caught two fish and moved over to Fraser Point. There was one 200-yard stretch where there weren’t any boats, so we went in there and fished a dock. Matt caught a 2-pounder on his first cast. I cast right in there and caught another 2-pounder. Then I made a cast to the bank and caught another 4-pounder that got wrapped around a cable and broke off.”

Kimberling said the team had their five weigh-in fish by 10 a.m. They filled their limit with drop-shot rigs baited with an Aaron’s Morning Dawn-colored Roboworm in 10 to 20 feet of water on banks with large rocks.

“After that, the wind was really bad, so we decided to make a run back to the launch to fish the creek there,” Kimberling said. “We started punching mats in there, flipping a toxic grape Missile Baits D Bomb. We went about 200 yards into the creek and caught a 5-pounder and a 3-pounder out of the same mat within two casts of each other.

“After a bit of a lull, Matt flipped up against a tree and swam the bait out,” Kimberling said. “A fish followed it and ate it on the swim. Matt thought it was a carp, then he finally set the hook, and it was our big fish at 6 pounds, 1 ounce.”

Kimberling said the duo caught nine bass – all keepers – during the course of the day.

The top T0 teams that advanced to the 2023 College Fishing National Championship are:

MLF College Fishing teams compete in three regular-season tournaments in one of five conferences – Central, Northern, Southern, Southeastern and Western. The Top 10 teams from each division’s three regular-season tournaments and the Top 20 teams from the annual Abu Garcia College Fishing Open will advance to the following season’s National Championship. The 2023 Abu Garcia College Fishing Presented by YETI National Championship Presented by Lowrance will be held on Fort Gibson Lake in Wagoner, Oklahoma, March 29-31, and is hosted by the Wagoner Area Chamber of Commerce.