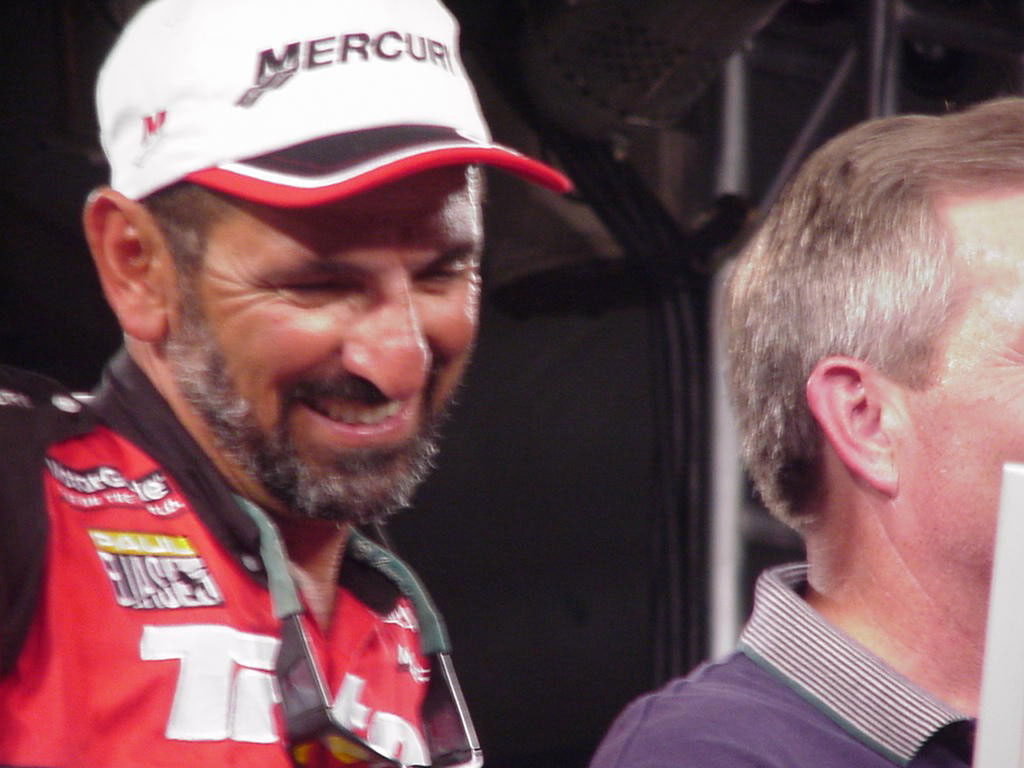 You don’t say? … On a day where many pros said they had a tough time landing the big ones – a 12-pound stringer was good enough for a place in the top 10 – veteran Paul Elias of Pachuta, Miss., weighed in a stringer of 18-4. The weight, over 2 1/2 pounds more than his closest competitor, would have been an exceptional catch on any day of any tourney. But asked how he caught them, Elias was elusive. “I caught them all on fishing lures,” he said.

Go figure … Pro Rick Clunn of Ava, Mo., expressed disappointment in his performance on the Red River today, saying, “I just don’t feel like I’ve got these fish figured out yet.” Yet his 15-pound, 9-ounce catch landed him in a solid third place on day one. He explained that he only got six bites all day long (a letdown for the winner of two FLW events this year). “But it’s the right kind of fish,” he said. “That’s the good part.” Indeed.

This honeymoon isn’t over … Don’t blame him if it seems that last year’s Angler of the Year, pro David Walker of Cannon, Ky., is walking tall after the first day of competition. Last Saturday he got married and today he landed a nice weight total of 12 pounds, 7 ounces, putting him in eighth place. Said Charlie Evans, Operation Bass chief operating officer, “Not bad for a guy on his honeymoon.”

It’s a Gas … Pro Rick Gasaway of Kennesaw, Ga., brought in a hefty 14-pound catch today that put him in sixth place, positioning him well for a run at the largest cash prize in competitive bass fishing – $250,000. What’s remarkable is that not only did Gasaway NOT make any top-10 finishes this year, this is his first year on the pro fishing tour.

Bigger is better … Co-angler Marc LeVesque of Waterbury, Conn., only weighed in three fish today, yet he still placed second. How did he do it? He brought a 6-pound, 6-ounce behemoth across the scale, by far outweighing the next closest big bass of the day. The huge fish gave him an 11-pound, 8-ounce total and drew an appreciative roar from the crowd.

Oh yeah, you try it … Even though Quint Bourgeois has never placed in one, the co-angler from Knoxville, Tenn., has qualified and competed in every championship ever held on the FLW Tour. Kudos.

A backwards approach … Co-angler leader Tom Hunley of Stamping Ground, Ky., landed a whopping 13 pounds, 12 ounces, which must have been gut-wrenching for Land O’Lakes Angler of the Year Clark Wendlandt of Cedar Park, Texas. Hunley, Wendlandt’s partner on day one, caught them from the back of Wendlandt’s boat while Wendlandt himself only caught 5 pounds, 5 ounces. Explained Hunley, “The area he’s fishing, you can cast anywhere. And the way I caught them today was the way I caught them in practice.”

21: Number of pounds cited by several anglers as the two-day total needed to advance into the second round.

“On the radio over here, I heard they saw the biggest bass boat funeral they ever saw.”
– Pro Don Stevens of Otsego, Mich., describing the scene as local law enforcement escorted the 50 tournament trucks and boat trailers across Shreveport from the Red River to the weigh-in at Wal-Mart.

“I think I’m going to go ahead and turn myself in.”
– Law-abiding pro Carl Maxfield of Summerville, S.C., commenting on how many red lights the bass boat parade ran on their way across town.

“With a lotta luck.”
– A disappointed pro, Peter Thliveros of Jacksonville, Fla., when asked how he caught them today. Thliveros, last year a winner on Lake St. Clair, weighed in three fish for a total of 5-0.