Starting Practice on Harris with LeHew 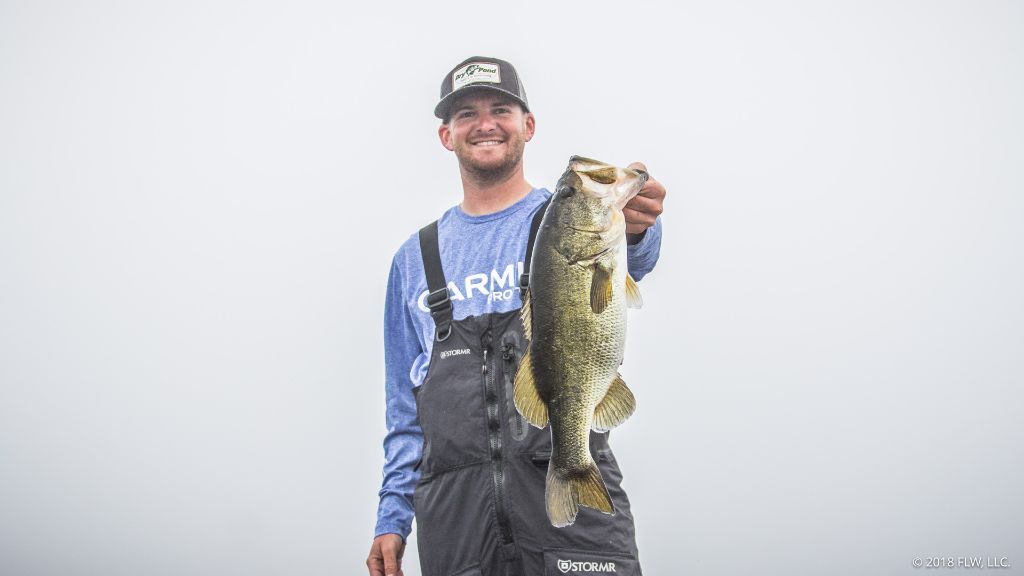 Coming up through College Fishing, Shane LeHew had a stupendous 2017, finishing seventh in the Angler of the Year race and making the Forrest Wood Cup for the third year running. His best finish last year was fourth, right here at the Harris Chain, and he caught 23 pounds, 15 ounces on day one.  The second stop of the FLW Tour which is presented by Lowrance is back on the Harris Chain again this year, albeit a few weeks earlier, and the soft-spoken North Carolinian was kind enough to let me tag along for his first morning of practice. 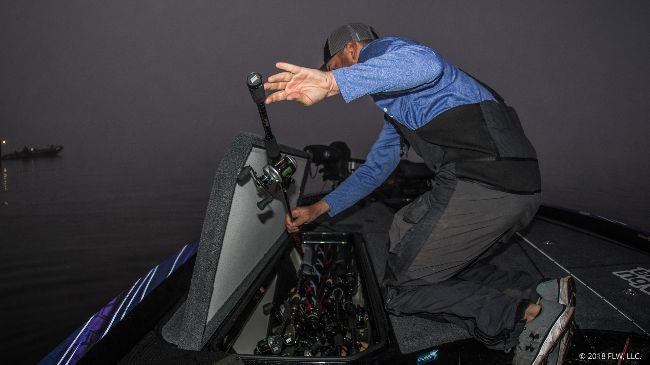 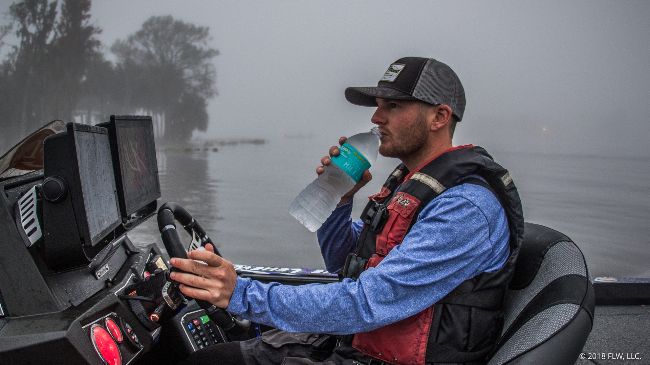 There are a total of 10 lakes and miles of associated canals pros can explore during this week’s event on the Harris Chain. As such, it makes picking where to start a little more challenging than usual – LeHew kept it simple and dumped in at takeoff on Lake Harris. Launching shortly after 6:30 a.m., LeHew takes his time pulling rods out and idling out of the bay. Not only is he a little under the weather from a bad night of heartburn, it’s so foggy that running anywhere to start would be extremely unwise. 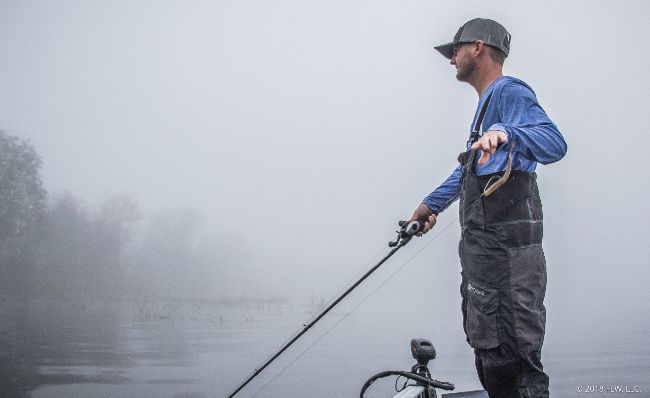 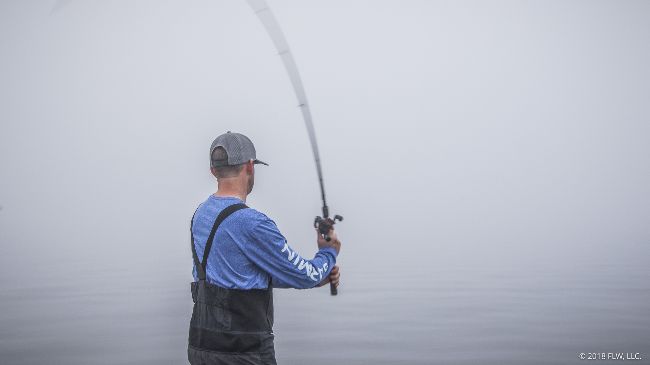 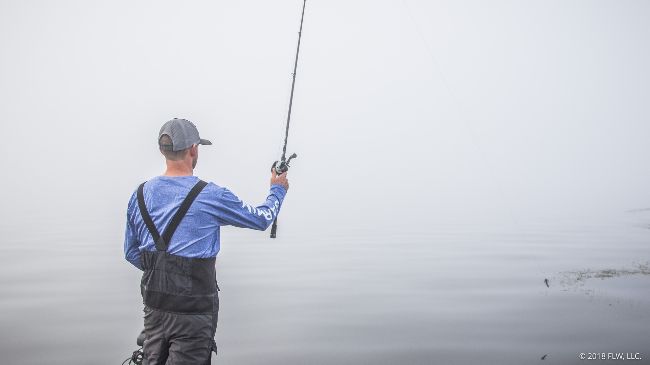 LeHew begins simply by idling out from the ramp until he doesn’t see another boat. It’s far too foggy to run safely, but it makes for a pleasantly cool and isolated scene in which to fish. Stopping on the grass line some ways from the ramp, LeHew begins flipping and winding his way along with a couple soft plastics. After 15 unsuccessful minutes on the bank, LeHew cranks up again and idles a bit until he finds some submerged grass he likes the look of. Alternating between a vibrating jig and a lipless crankbait, he begins to pick away at the grass. Now, just slightly off the bank, he’s entirely socked in by fog. After a couple more stretches of idling, LeHew starts flipping topped-out grass a hundred yards from the bank in 10 feet of water.

Though he’d rather the fog not be here, LeHew knows that it can still be productive to be on the water.

“That’s how I found them at Toho that one time,” he relays. “I was just idling down a grass line in the fog and 3-pounders came up schooling.” 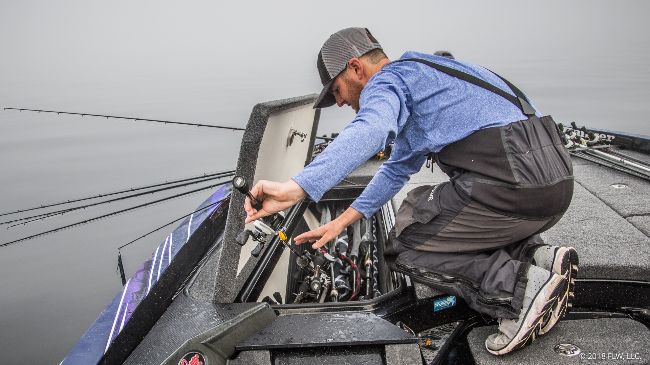 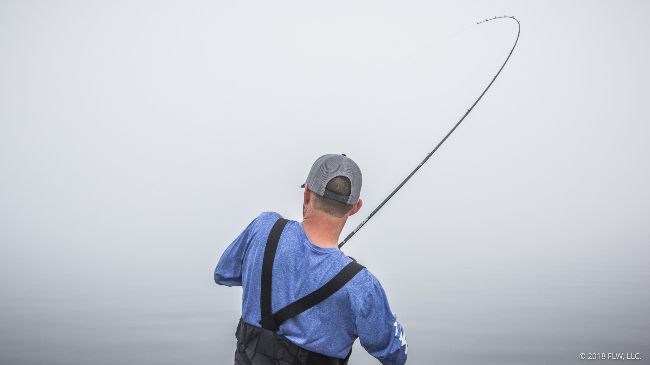 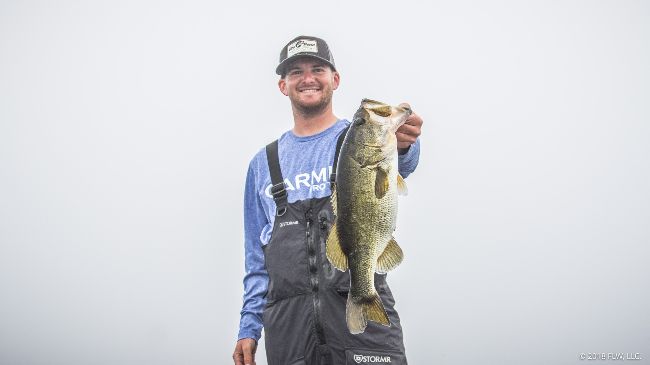 With no bites coming, LeHew pulls out a topwater rod after noticing some fish sloshing on the surface over the submerged hydrilla. He makes a quick bait change, and minutes later a 5-pounder smashes it. The Harris Chain has been kicking out huge weights recently, so getting a big one right off the bat is certainly an auspicious start. 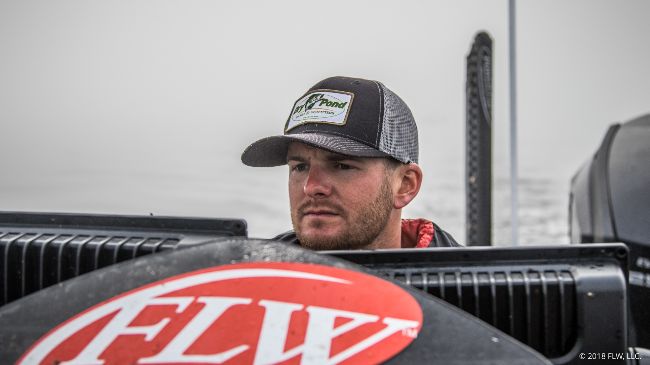 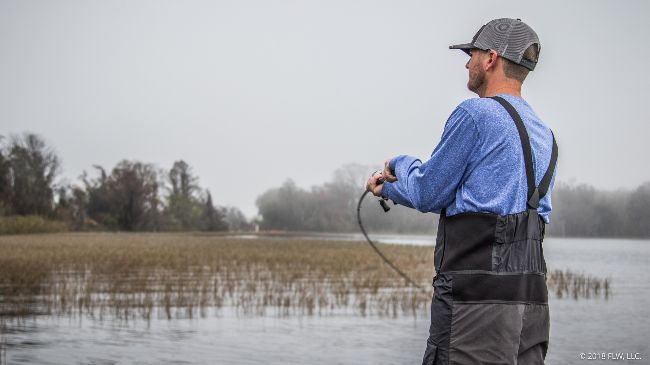 After fishing a bit longer with no success, LeHew sits back down in the driver’s seat to idle a bit more. After a short idle and in somewhat cleared conditions, he starts to run, finally moving at more than an idle, and sets down on a bank with some Kissimmee grass.  LeHew gives it a hundred yards or so with a swimbait and then makes a move as the sun finally begins to get the better of the fog. 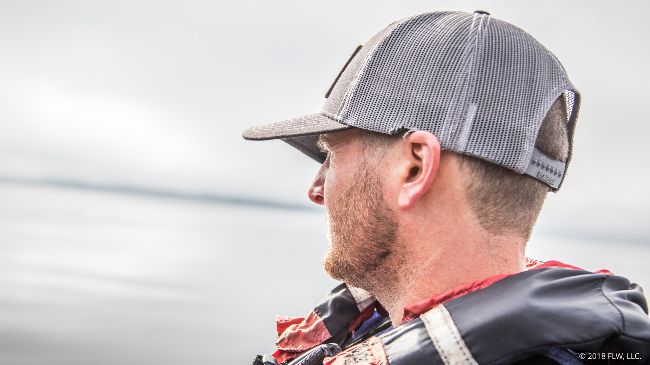 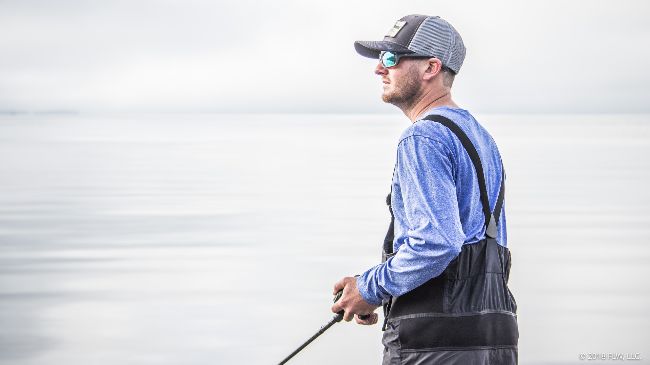 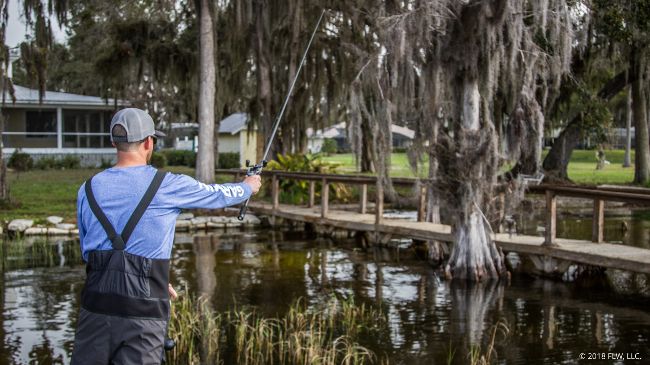 Setting down offshore again at about 9:30 a.m., LeHew dons his shades and starts by fishing around some of the seemingly infinite submerged hydrilla that’s present this year in Harris. With no bites again, he points the boat toward a dock on the bank.

“Jody, I found the winning fish,” says LeHew as we edge toward the dock. “There’s so many I’m going to have to share them with someone. This might be the best gar hole I’ve ever seen.”

Indeed, in the clear water behind the Kissimmee grass, there are seemingly dozens of gar, and big ones, too. If it was a gar derby, LeHew would probably be in pretty good shape. 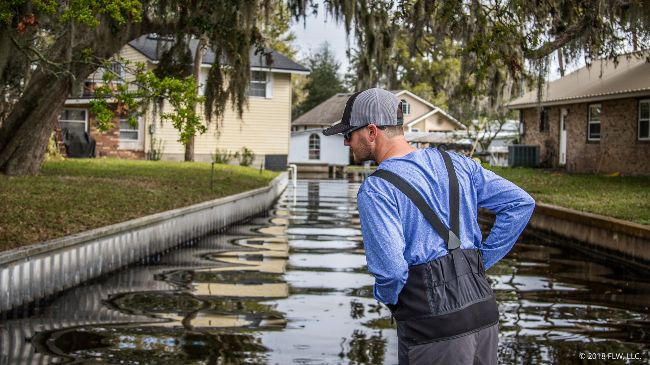 As the sun continues to rise, LeHew decides it’s time to look for some spawners and poke into one of the many canals on the Harris Chain. Easing in to a canal, he immediately spots a pair of big ones swimming. LeHew then sees a bed, and then another.

“Did you see that one?” he exclaims. “This is gonna be a bed-fishing tournament.” 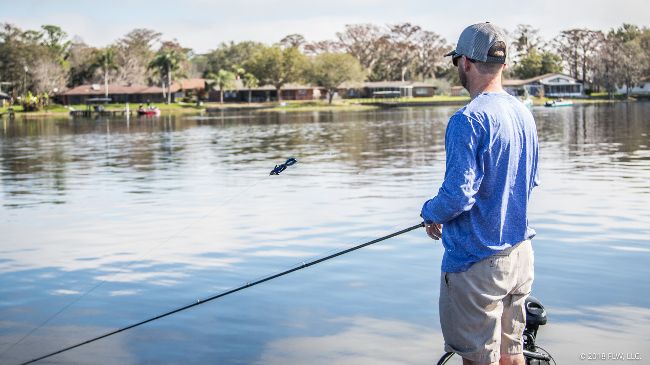 After finishing his look around in the canal, LeHew surprisingly moves back offshore to flip a jig and wind a vibrating jig in the seemingly endless hydrilla.

“Now that the sun’s out you can see lots of little bluegills and things in this grass,” says LeHew. “Somebody will catch ‘em in Harris doing this, I know it. I don’t know where though.” 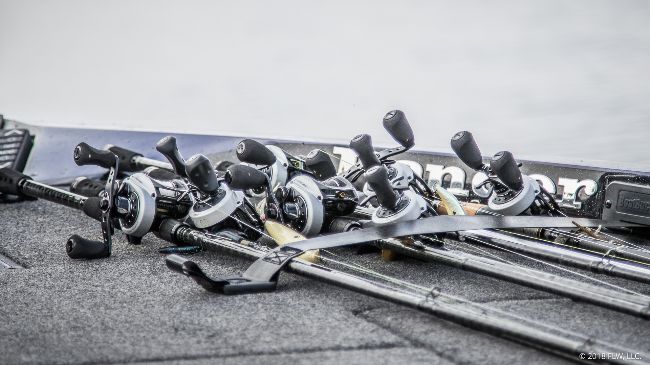 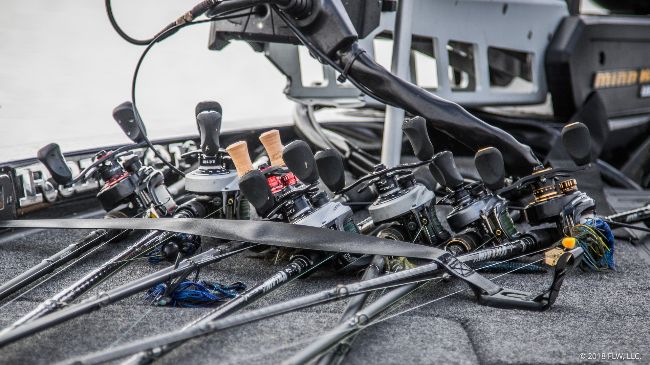 LeHew started with a bunch of rods on deck, and has only added two to the pile – a topwater rod and a flipping stick with flouro. This year, all his stuff is brand new from Abu Garcia, and he’s sporting a wrap on his boat for the first time ever. It’s an unusual look for one of the most understated anglers on tour, but he’s apparently moving up in the world. 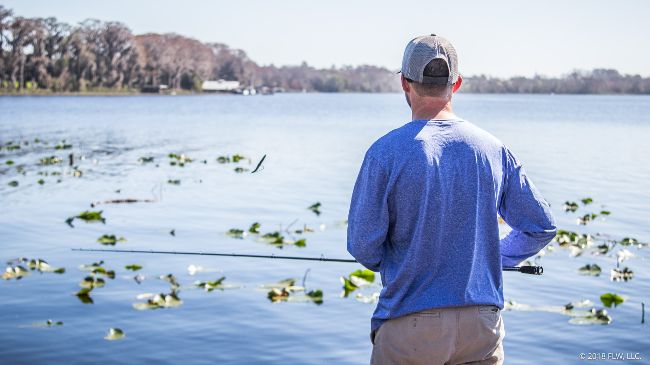 After a short run of flipping docks, LeHew swings into a cove with a bunch of pads and starts flipping a stickworm around. He’s still not actually looking for bedding fish.

“For this place being so on fire, it’s been kinda slow,” says LeHew, who’s had about 1.5 bites as the clock ticks past 11 a.m. “Last year I really liked it here and I had like three things I could do. I don’t want to just have bed-fishing this year.” 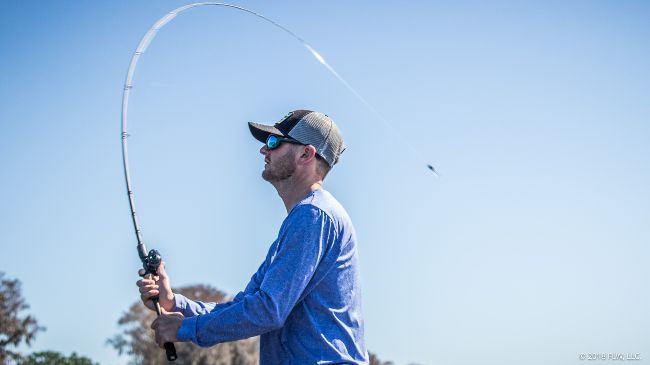 After striking out in the pads, LeHew does a little more idling, and finally finds some grass that doesn’t take up the whole lake. After pinpointing a patch of hydrilla just off the main line of Kissimmee grass, LeHew grabs a vibrating jig and gets to work.

“Oh, that was a big one,” says LeHew as he sets the hook. “It knocked like 3 feet of slack in my line and I hooked her for a second.”

One good bite in his pocket, LeHew swings back through the patch with a lipless crankbait with no bites. Harris is playing hard to get so far. 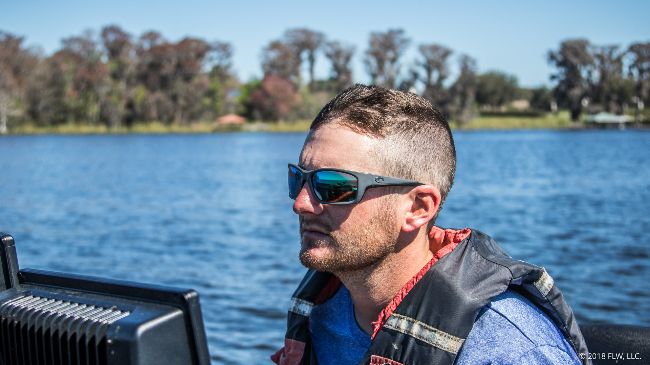 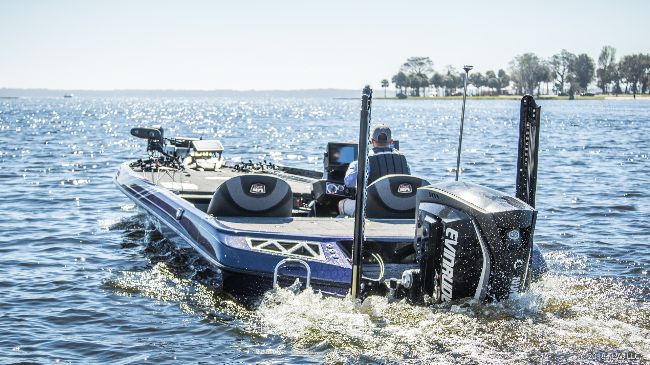 Just before noon, LeHew takes me back to the ramp. He’s always calm and collected, but today has been one of the most relaxing mornings on the water that I can remember. With so much potential water to break down, LeHew seems to have a good handle on things despite only getting a couple of bites to start off practice. As I head in for lunch and my laptop, LeHew rolls back out to get another six or so hours in on Harris.