Touring the Harris Chain with Hahner

Finishing 33rd at Okeechobee, Cody Hahner kicked off his FLW Tour career with a success. Now, on the second stop of the Florida swing, the Wisconsin rookie is looking for some consistency and perhaps to make his first Tour cut. After two full days of practice on the Harris Chain with travel buddy and practice partner Connor Graham, Hahner wanted to tie up some loose ends on the final day.

With plans to burn some gas, Hahner was kind enough to let me hitch a ride for a morning tour of the “other” lakes in the Harris Chain. 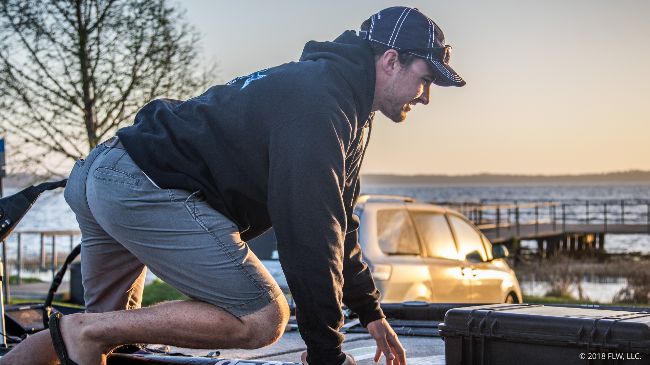 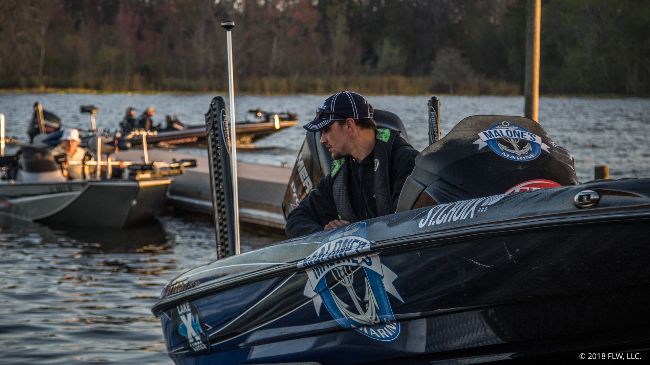 Hahner and Graham essentially arrive fully-ready to the ramp on the west side of Lake Harris along Highway 27, coffee in hand and rods on the deck already. After unclipping the boat, Hahner hops in and Graham backs him down to get another day underway. Unlike the first two days, there isn’t a trace of fog on the water – its game on right from the get go. 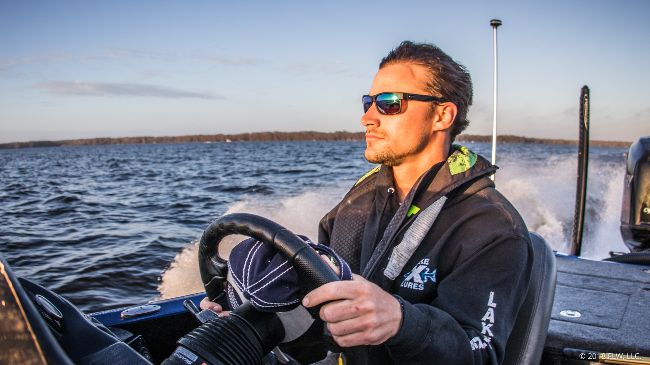 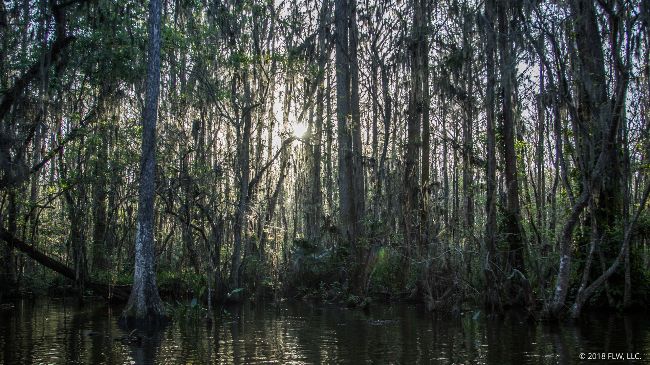 Hahner’s first move is to blaze across the lake toward the Dead River and then into the Dora Canal. In a jiffy, he’s turned launching in Harris into 20 minutes or so of extra idling.

“I want to be in the water as much as possible,” says Hahner by way of explanation. “I want to spend most of the day in Harris and Little Harris I think, but I needed to see these other lakes.”

With one day on Harris and another on Lake Griffin already under his belt (plus a little pre-practice on both after the opener on Okeechobee), Hahner has a bit of a plan in place, but he’s not willing to put all his eggs in any one basket just yet. As such, he wants to spend some time in Lake Dora and Beauclair as well. 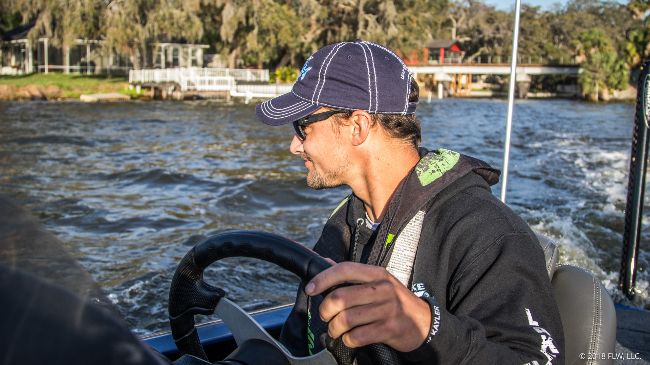 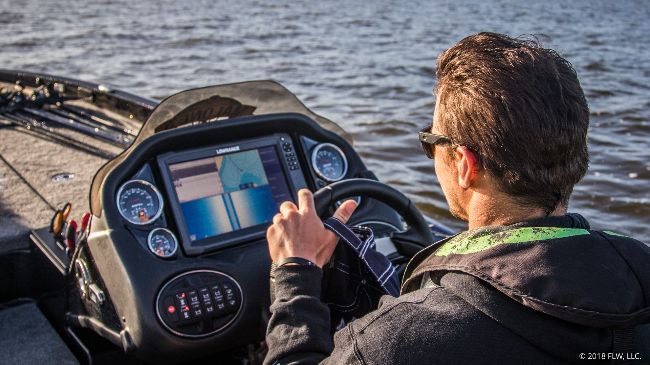 Once out of the Dora Canal, Hahner quickly assesses the water clarity (it is dirtier than he hoped) and makes a short run to one of the few drops marked on the map. Once there, he hones in on his Lowrance and begins to idle. The bottom of Dora is remarkably free of grass compared to Harris and Griffin which are currently loaded out with hydrilla. With his StructureScan set to read out 60 feet on either side, Hahner quickly covers the section of the map he’s interested in and rolls on without making a cast. 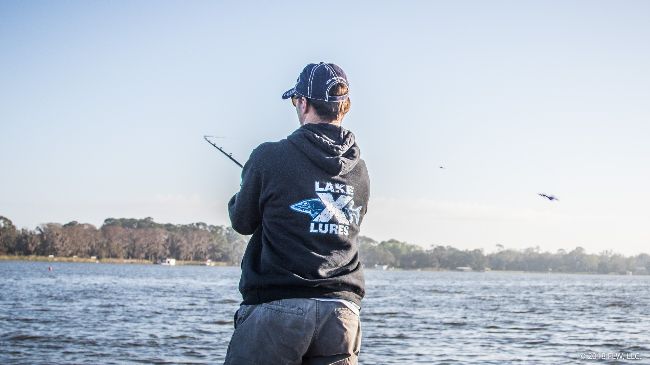 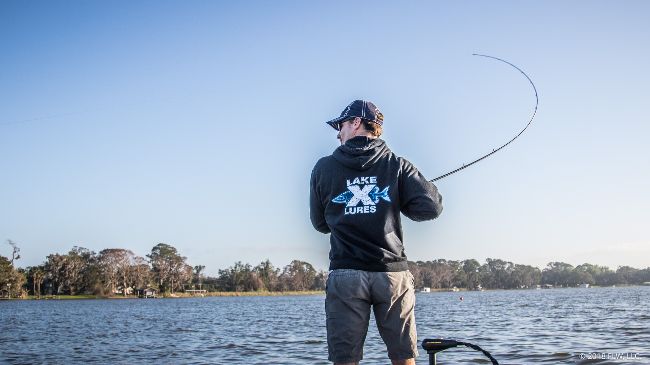 Hahner decides to fish at the next stop after marking some bait and bass on the graph. Picking up a Carolina rig, he fires a few casts out over the drop before getting a bite. Forgetting that he’s changed to a much smaller hook for practice, he decides to swing on the next one. It’s a Bryan Thrift-esque hookset, but he comes up empty, foiled by the combination of small 1/0 hook and a Zoom Brush Hog. Nonetheless, it’s not a bad sign – you don’t need to get them in the boat in practice.

“The water doesn’t look good, but there are fish out there,” says Hahner of the spot.  “As soon as you get it up there they bite. I guess they don’t mind this water color.” 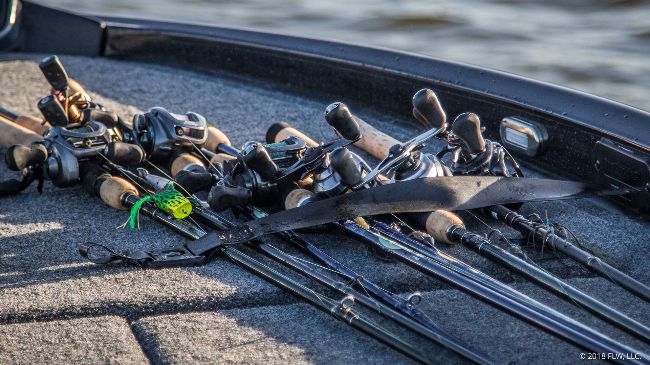 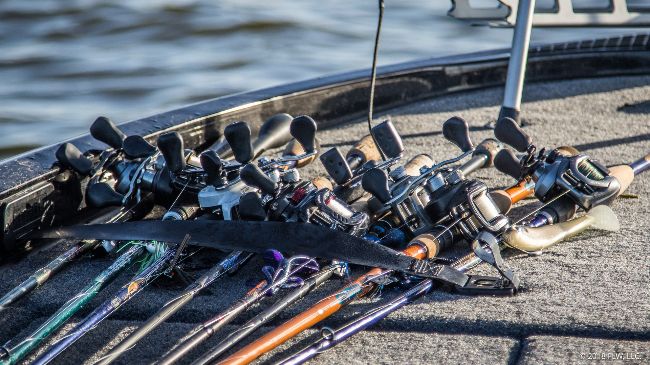 Hahner came loaded for bear, with a full suite of offshore and shallow stuff on deck. He’s in the process of completely switching over to St. Croix rods, and he’s still got a few old favorites on deck that he hasn’t gotten a replacement for just yet. 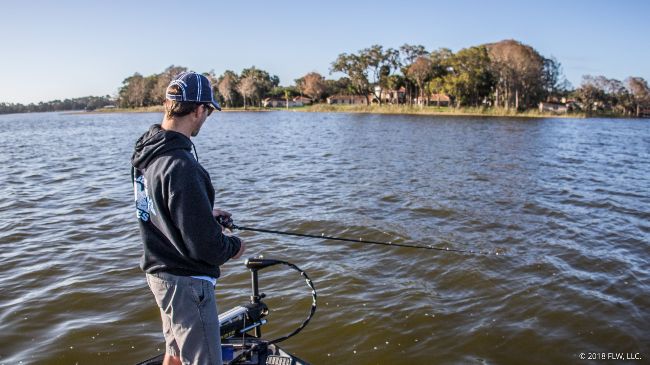 Our next stop looks even better on the Lowrance. It’s another drop off a point, and there are actually quite a few fish showing themselves. Hahner cuts the motor after two passes and picks up the C-rig again. Everyone in the boat is expecting a bite in short order. For some reason, it doesn’t come – apparently, these fish are a little tricky. 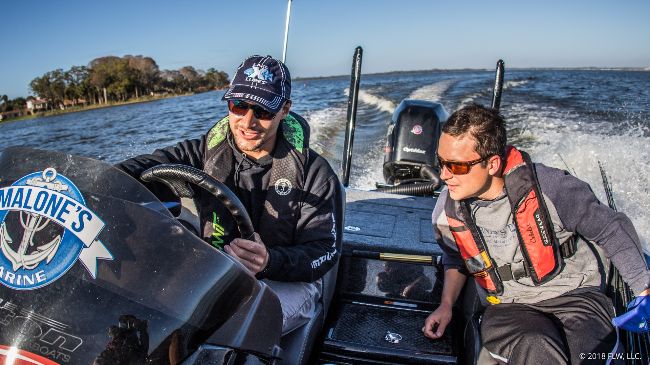 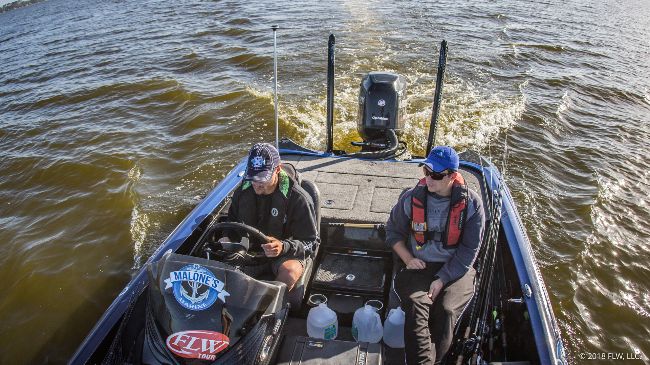 As the morning goes on, it’s apparent that Hahner and Graham work very well together. From barely spoken conversations to share little things they pick up about the lake and the conditions to their bait choice when actually fishing, the duo are a good fit. Recently graduated from the University of Wisconsin-Stevens Point, Graham is only along for the ride for the Harris Chain and Lanier events, but he’s getting the full experience. Hahner is saving money by sleeping in his truck, and that alone is a big commitment to the dream.

“I should have thought of it, but it kinda sucks in Florida,” says Hahner of his sleeping area, which is simply a tonneau cover over the bed. “I need to come up with a better system. The mosquitoes are still pretty bad down here. So, you want to be tired enough at night that you just go right out and then deal with the consequences in the morning.” 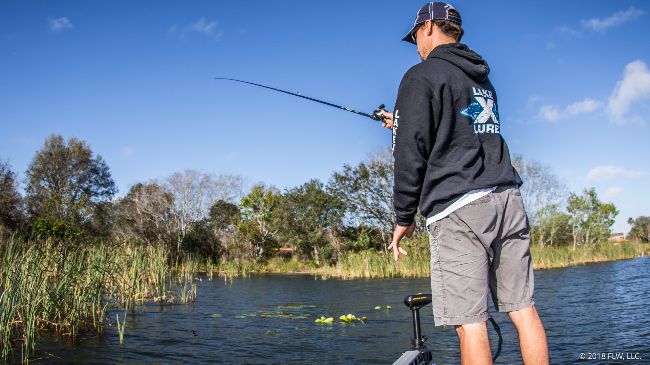 After a few more stops offshore, Hahner has worked himself out of Dora and almost to the end of Lake Beauclair. There, he finally goes to bank, pulling up just outside of the canal mouth to actually fish like he’s in Florida.

“We’re gonna flip a little bit. There’s not enough offshore stuff to make me come down here for just that,” says Hahner. “We have not been catching many fish shallow. We’ve seen beds, but the amount of fish on them we’re seeing is pretty minimal.”

After fishing around some lovely pads and reeds with no bites, Hahner makes the observation that every northerner makes at some point in the south.

“If this was in Wisconsin we would have caught 20 through that,” says Hahner. “That’s the problem out here, it all looks so good. But, you’d think for how healthy these lakes are you’d catch a lot more 12-inchers doing this.” 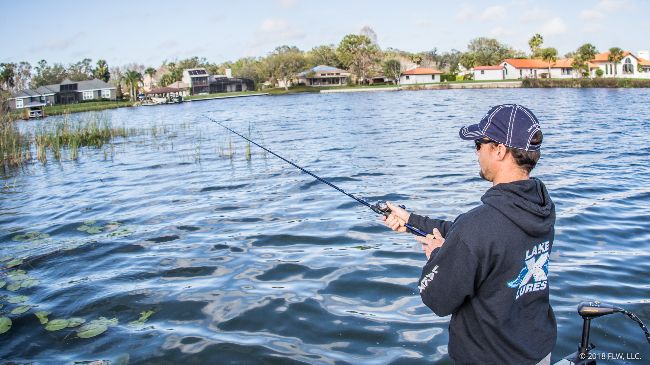 Finally, Graham gets a bite, as a decent fish bashes through some pads to take a swing at his creature bait on the way back in. It doesn’t hook up, but it prompts Hahner to spend a little more time fishing. Working into and around the mouth of the canal, the pair spot a few beds a bit deeper (and even coax one bite), but otherwise don’t run into anything of note. It seems like the shallow bite truly isn’t rolling for Hahner. 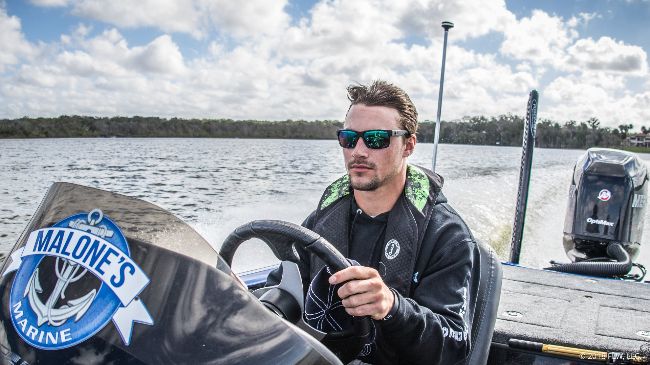 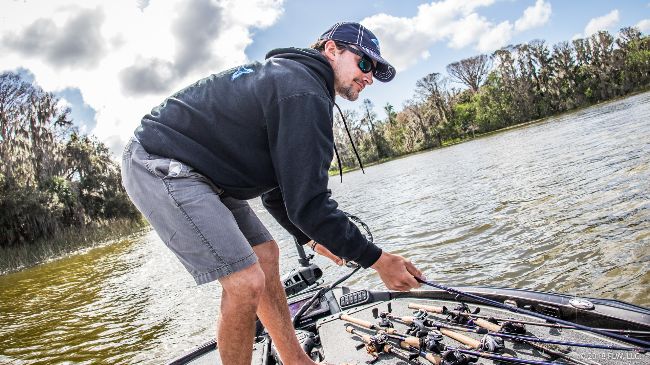 With nothing much to show in Beauclair, Hahner cranks up and rolls back into Dora. Not stopping for anything offshore, he swings into a pocket he and Graham noted earlier in the day during their idling session. Picking up a popping frog, he fishes through it quickly with no success.

“We’ve had one big bite shallow in two days,” says Hahner. “It’s time to go back into Harris and graph. It’s probably a little different story for Cox or some of these guys who know where the good shallow areas are, but that’s not happening for us.” 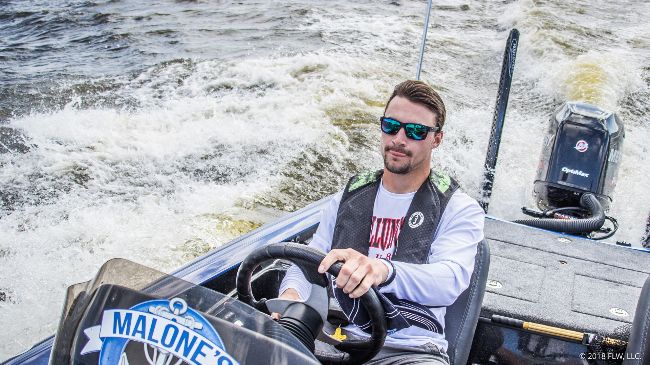 After a short run, we settled down again for the long idle through the Dora Canal. This time, we’re going with the current, and it’s a considerably quicker and smoother ride through the jungle. Along the way, Hahner explains that he’s got a good feeling about Griffin, but is worried about the potential of a killer fog delay.

“In Griffin it’s just like home,” says Hahner with more than a hint of optimism. “They’re sitting like how I’d catch them back home. And there’s some really good stuff, but if we got a fog delay I’d be screwed. That’s why I want to go back into Harris this afternoon.” 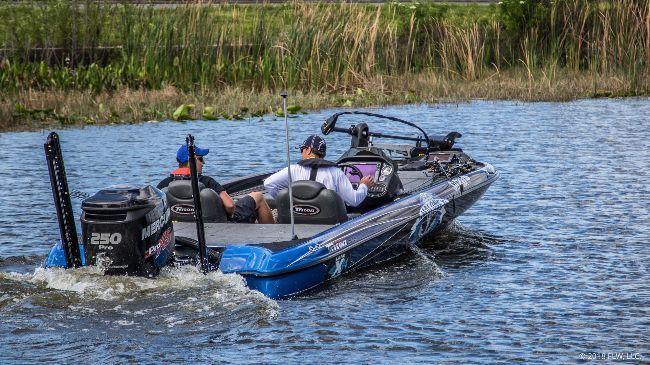 Along the way into Harris, Hahner drops me back at the ramp in Lake Eustis for a pickup by FLW Senior Editor Kyle Wood. It’s faster to go lake-to-lake by road in many instances, and my absence will let Hahner spend the rest of the day entirely focused on his Lowrance in search of the motherlode.