The fishing is picking up as the day goes on 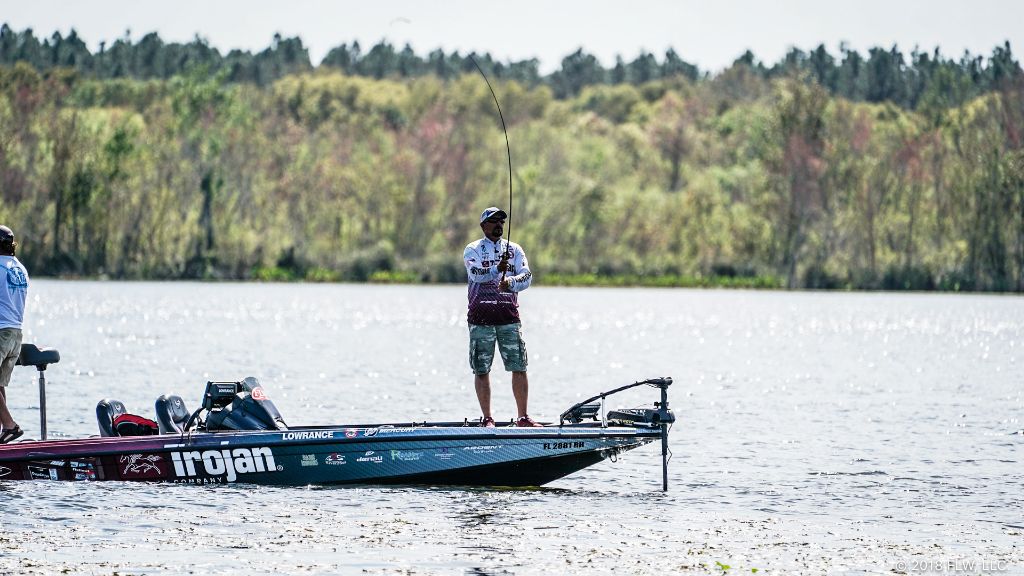 The OTW team is coming back now so it's time to close down the blog. We will be back up with the blog tomorrow morning after takeoff. In the meantime, make sure to tune in to weigh-in at 3 p.m. ET.

It's all unofficial, but Glenn Browne just moved into the lead with a 20-pound bag. It includes an 8-pounder, and should put the Florida taco in great position to start off his comeback tournament.

Richard Lowitzski has himself a limit for 8 pounds even. He's been in Harris working through an offshore area with a worm.

Fishing in Harris, Tom Redington has four 2-pounders and Jim Moynagh has a small limit. Nearby, Terry Bolton is working on a good bag with 13+ and a big one.

1:25 The lake breakdown is interesting

We’ll have a lot better idea of what is going down once weigh-in concludes today, but so far it seems like a disproportionate number of the big weights are coming out of Dora and Beauclair. Those lakes get less pressure than the rest of the chain, but they aren’t known as tournament winners. Perhaps they will be this week?

We've got confirmation that Brandon McMillan has around 13 to 14 pounds. He's fishing in Beauclair and is currently working one on a bed. 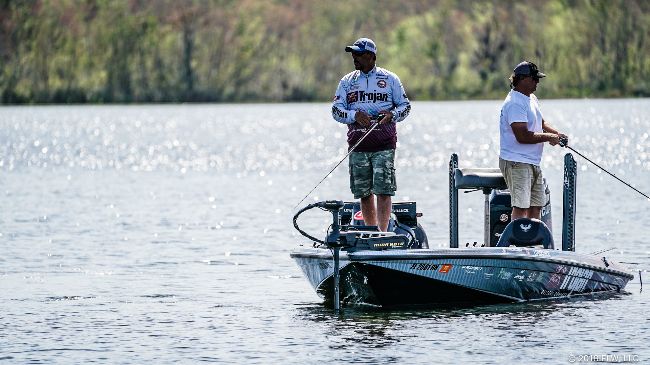 Matt Wittekiend and Darrell Davis are both having really good days. They each have a pair of fish around 6 pounds and over 17 pounds in the livewell.

Bradley Hallman filled his limit with a 2-pounder on his next cast. Apparently it can happen quick on the Harris Chain.

Bradley Hallman had three in the boat a moment ago and just picked up a spinning rod to add a 3-pounder to the mix. He started the day with a lipless, but it’s time to fill a limit now. Of course, he says he’d rather be flipping.

Luke Dunkin has busted out the spinning rod in search of a limit in Griffin. He’s got three in the box and it’s a little past noon now.

12:15 Frederick only has three

Tournament favorite Tim Frederick just turned up and he’s only got three keepers for about 7 pounds right now. There’s quite a bit of time left, but that is not the start he wants if he’s going to take a crack at back-to-back wins. 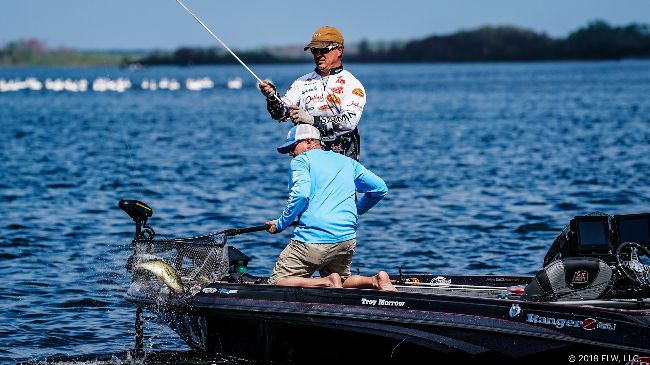 Troy Morrow is hanging tough in Griffin and just landed a 5-pounder to boost his limit significantly. Around him, the lake is beginning to empty out as anglers in the earlier flights begin to think about getting back into Harris.

David Wootton is slinging a jerkbait (it looks like that trend has made it to the FLW Tour this year) and says he’s got about 17 pounds already.

Elsewhere, Brad Knight has three small ones, Michael Neal is up to 11 pounds and Troy Morrow has a little limit.

Word on the street (take that for what it’s worth) is that Shane Lineberger has about 19 pounds. Confirmed word is that Bob Morin has a limit for just a touch under 16 pounds. 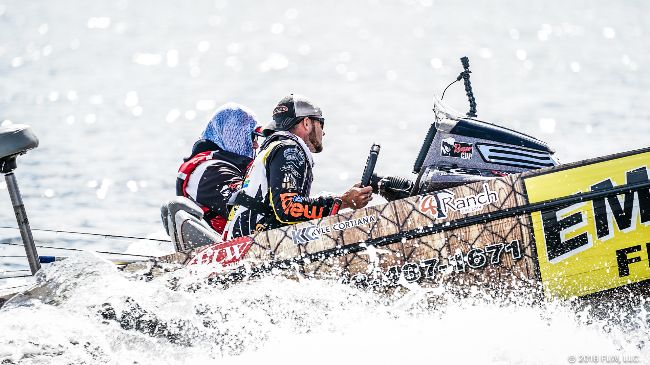 Kyle Cortiana is slinging away in Griffin and has four small keepers to his credit so far. 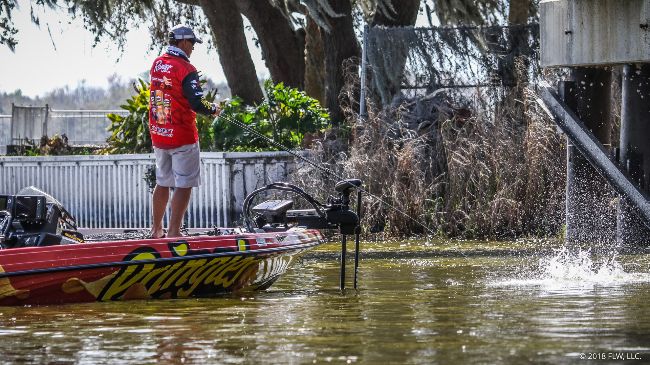 Greg Bohannan just culled up with a 3-pounder. He’s got perhaps 13 pounds in the livewell now.

John Hunter has a limit for perhaps 10 pounds and is fishing in Little Harris. Cody Kelley has three, and one is “alright.”

Tim Cales got his rookie season started off great at Okeechobee, but today isn’t going so well. He’s got a limit, but he says it’s only worth about 7 pounds. 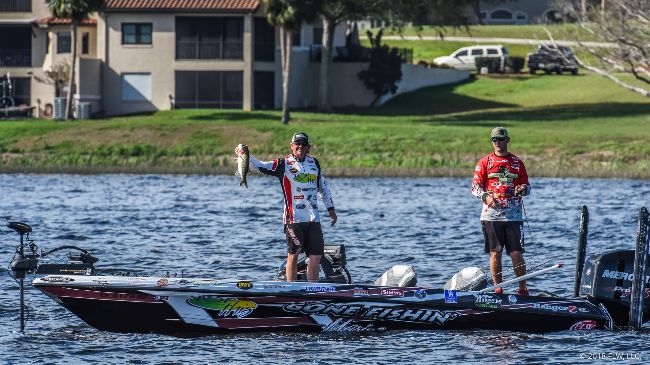 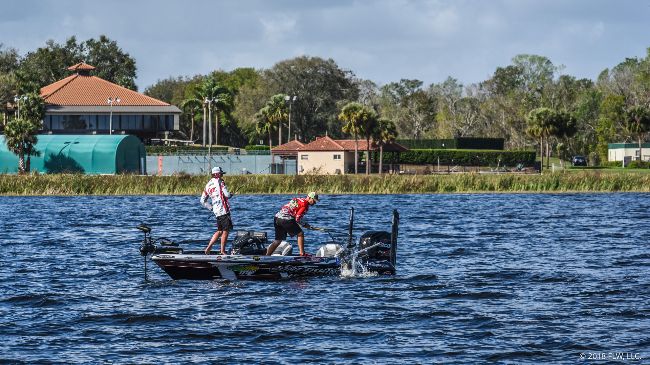 Billy Hines is fishing in Harris and has a limit for about 10 pounds with one real good one. Fishing right in the Dora Canal, Greg Bohannan has sacked up 11 pounds. 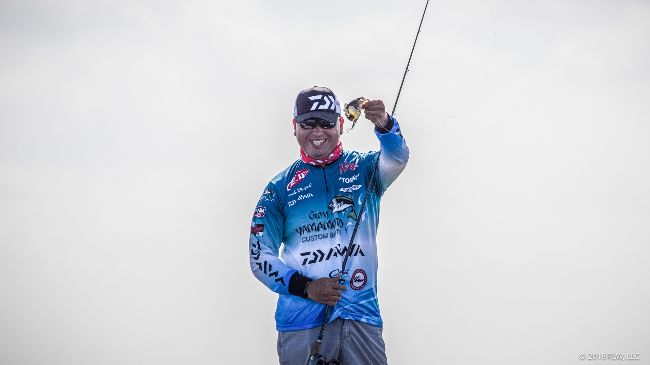 Scott Martin got on the board with a 3-pounder pretty early. No word on him lately, but he got off to a good start for sure. Elsewhere, Braxton Setzer has four for about 8 pounds and Yasuke Miyazaki has three little ones – interestingly, they’re both throwing a jerkbait. Rex Huff has three small ones and Brandon Mosely has a limit with one good one.

So far the fishing seems to be a little tougher than expected, though there are a lot of anglers that we haven’t touched on yet. Michael Wooley ran into Griffin to start, but with zero keepers he’s getting ready to return to Harris. 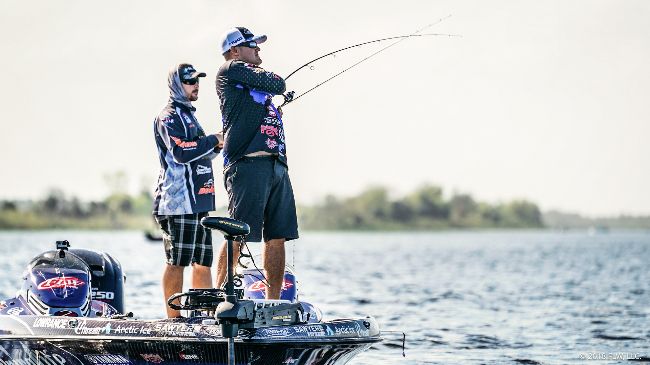 10:10 Morgan and Smith with limits

Andy Morgan and Blake Smith both have small limits. Smith says his is worth 10 pounds, and Morgan says his is small, which probably means he’s got more than 10 pounds.

Scott Ashmore just loaded up the livewell with a couple of dinks to go with his good one. He’s worming in some offshore eelgrass.

Scott Ashmore is in Griffin and says he’s got one good one to start. He was one of the last boats through the lock, so he’s got a lot of day left.

Brian Latimer is burning a square bill crankbait out in Griffin around a few other boats. So far he’s sitting on an empty livewell.

It’s pretty blustery out on Griffin now, and there’s a decent breeze in Harris as well. It’s not unfishable my any means, but it’ll make seeing bedding bass a little trickier. It may make boat positioning a little harder offshore, but a little breeze could end up helping that bite as well.

In Harris, David Dudley has boxed up a limit for about 10 pounds. Over in Griffin, Billy McDonald has a pair of keepers in the ‘well now. 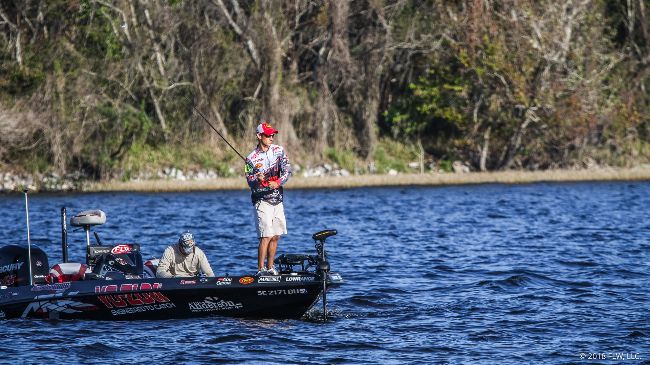 9:05 McDonald boxes a good one, Cobb has four

Billy McDonald just popped a 3-pounder over in Griffin. We’ll get a full update on him shortly in all likelihood, but that’s a good one to have for sure. In Harris, Brandon Cobb has four little skippers. Also in Griffin, fishing offshore with a big group, Matt Reed just put his first in the box. 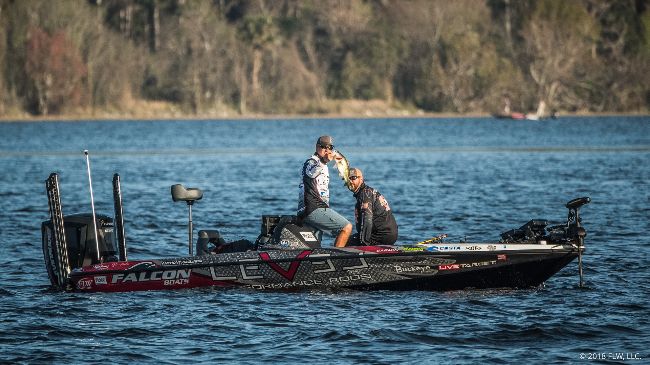 We don’t have a weight estimate because he’s in a group of boats offshore, but Anthony Gagliardi is culling already back in Harris.

In Griffin, Michael Neal boxed up his second a minute ago and Jeremy Lawyer just caught his first keeper. Also over there, Ramie Colson Jr. is on the board with 2-pounder caught shallow. 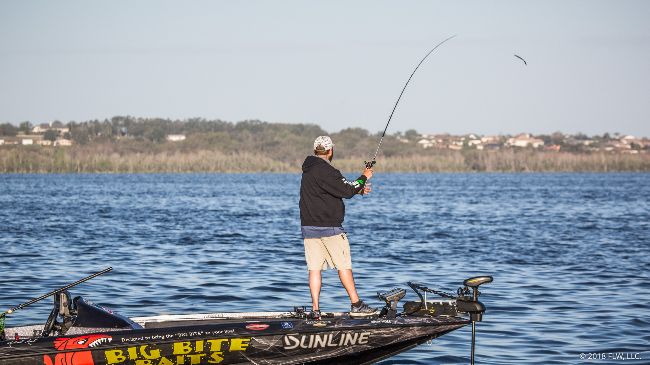 Michael Neal is winding out in Griffin and just boxed up a small keeper to get his day underway. In Harris, Freddy Hurley just put his second keeper in the ‘well. 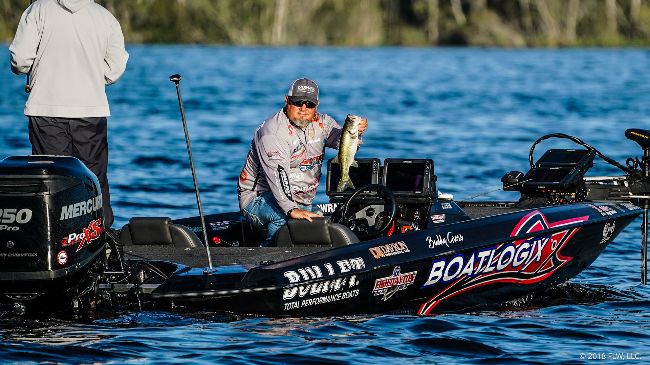 Fishing in Griffin, Buddy Gross is the first on the board with a solid 2-pounder he flipped up out of some shallow cover. Shane Lineberger has one in the box as well. So far, about 15 boats have made it to Griffin. 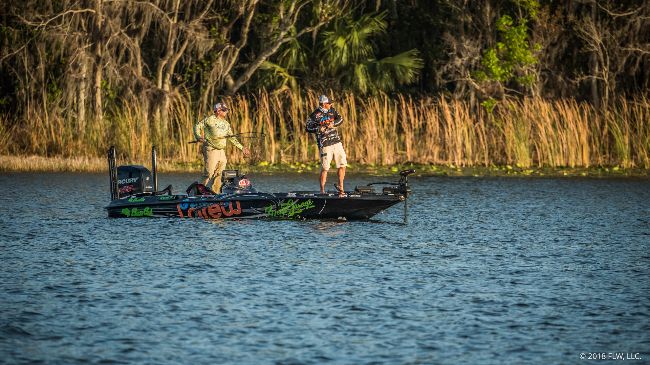 7:45 Some folks are starting close

No word on fish yet, but Bryan Thrift, Joseph Webster and Jeff Sprague have all started right near takeoff. Harris itself figures to play pretty big this week, and it looks like a few of the best have decided it’s worth starting right there.

Though pros that decided to start their day in Harris or Little Lake Harris are fishing by now, there are plenty of pros still running. Lake Griffin is about a 50-minute run with perfect conditions, and it’ll take considerably longer for anglers in the later flights due to congestion at the lock. That means that at least a third of the field and perhaps more than half won’t make a cast before about 8 o’clock. 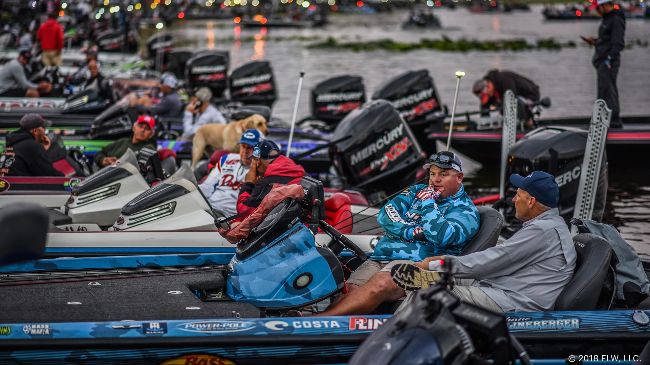 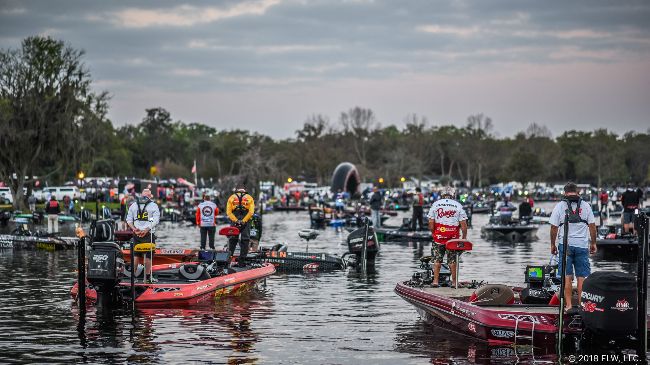 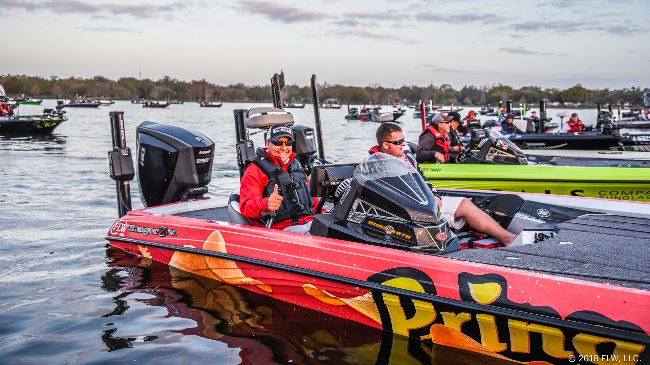 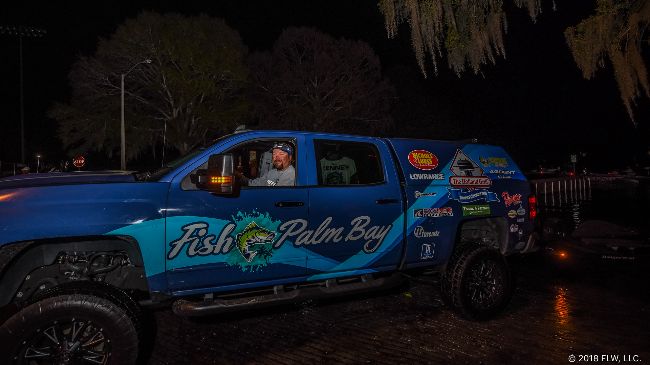 Day one of the FLW Tour presented by Lowrance and hosted by Lake County, Florida is underway on the Harris Chain. Last year’s tournament on the Harris Chain showcased a fishery in peak condition, and this year’s should do the same. Though there are some notable differences in the lakes and the conditions, the quality of the fishery remains top-notch.

The weather has been gorgeous all week and figures to stay steady for competition, but most pros say that it hasn’t moved a big wave of bass to the beds. In fact, that move happened a few weeks ago. That means it might be considerably harder for John Cox to go on a sight-fishing rampage like he did in last year’s derby, but there are even more postspawn bass to catch in the abundant offshore grass. This year, the amount of offshore grass in Lake Harris and Little Lake Harris has ballooned to epic proportions, and it’s still going strong in Lake Griffin as well. As such, we figure that those three lakes will be the main players again.

For techniques, look for a little less sight-fishing and a little more winding and dragging off the bank. Crankbaits and Carolina rigs are on a lot of decks this morning, and both are good for dissecting grass or shell beds in the right scenario. One technique that we hope will play is topwater – Shane LeHew caught a big one in practice on a walking bait, and there’s usually a good window for topwater action in the postspawn.

Despite a lot of fishing having spawned and great offshore cover available, don’t discount spawning or even prespawn fish entirely. The spawn is more drawn out in Florida than anywhere else, and that means there are almost always some bass in every stage. Flipping pads for unseen spawning fish or evening targeting prespawn bass could easily be a factor as well. FLW Tour pros are the best in the world, and they’ll do a lot to find some sort of edge over the competition.

Today, there’s no fog at takeoff and it looks like a perfect day to be outside in Florida. Let’s do this thing!