They say you should make hay while the sun shines, and apparently the FLW Tour’s best pros already knew that. They steamed back to Florida’s Harris Chain for the second event of the season, which is presented by Lowrance, and enjoyed a sunny, breezy, all-around beautiful first day that resulted in 11 limits of more than 20 pounds. Their co-angler partners added four more 20-plus bags.

At the top of the heap is Alabama pro Jamie Horton, who weighed 24-13 to take the early lead over Florida’s Koby Kreiger. Kreiger, who was assessed a 2-pound penalty after he violated rule No. 9 by running the main motor while he was on the front deck, trails Horton by just 1 ounce.

Horton admits he didn’t really have a sound game plan coming into the day, but he had two patterns that he knew had the potential to produce limits of fish. Thankfully for Horton, he was able to put a few in the boat early to relieve some of the pressure caused by his uncertainty.

“I just caught a couple good ones this morning,” he says. “I tried to capitalize on the shad spawn, what little bit was going on.”

With what would eventually be his second-best kicker in the boat early, Horton switched his attention from shad eaters to spawners in an area where he’d found bedding fish in practice, but where he didn’t expect to see the quality he found during day one. Thankfully, the water had cleared a tad, allowing him a better visual approach, and he was able to slowly decipher what they were “sitting on.” From there he just chipped away at 24 pounds.

“I knew I could catch a limit because I knew where enough bucks were on beds,” he says. “I didn’t catch many, but I caught a big one late. And I found three this afternoon that I didn’t know about.”

Horton wound up weighing in two keepers from the shad spawn pattern and three keepers caught while bed-fishing. Two of those were caught sight-fishing, while the other he caught blind-casting in the area.

He knows his lead is thin and the potential for monster stringers is high tomorrow, so Horton says he’s skipping the shad spawn program in the morning and racing straight to the remaining beds he located today. The biggest hurdle is company. Several other pros were in his best area today, so he’ll have to share and make the best of what’s left if he wants to hang around the top of the standings after Friday’s weigh-in. 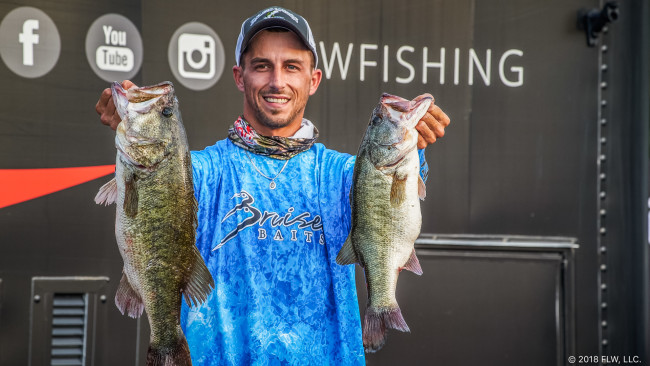 Eckman roars to co-angler lead with 24-1

It’s quite possible Ryan Eckman’s feet never touched the ground as he walked through the weigh-in line today. The Okeechobee, Fla., co-angler crushed a 24-pound, 1-ounce stringer while fishing with his personal fishing hero David Dudley. Eckman leads the co-angler division by 2 1/2 pounds. He says a day like this has been a long time coming.

“I don’t even know how to explain it,” Eckman says. “David Dudley is my person I want to be like when it comes to fishing some day. It was a God thing. It was meant to be for me. I have to give all the glory to God. David would tell you, too; he caught 25 fish, and I caught seven. But I got all the big ones to bite.”

Eckman says that when he found out on Wednesday evening that he’d be fishing with Dudley, he knew it would be a special tournament. It was, he says, the first restful night of sleep he’s ever had before a tournament.

In the morning, Eckman landed a runt that barely kept, and was worried he’d have to bring that small fish to the scale. But every half-hour or so he’d haul another toad over the gunwale.

The key was bombing long casts with either a Zoom UV Speed Worm or a Yamamoto Senko.

“I started this morning fishing them on a slow retrieve, but as the day went on I was reeling faster. I knew I’d be around them,” says Echman. “I consider him [Dudley] to be the best fisherman on Tour. I have to give a lot of credit to David. He got to that net quicker than I do as a co-angler. He took it above and beyond to make sure I got every fish in the boat.”