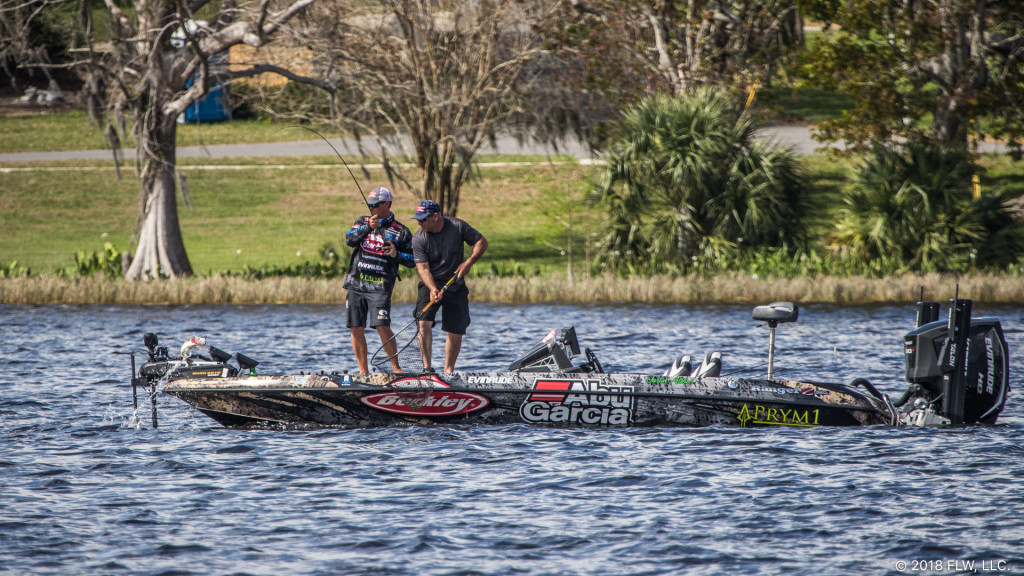 We’re calling it a day on the blog and our crew trickles off the water and toward weigh-in. There are plenty of mysteries left to solve, and we’ll do that at weigh-in, which starts live at 3 p.m. ET or in-person down at the lake. Only the top 30 fish on Saturday, so there’s a lot on the line today.

Brandon McMillan just culled with a solid 3-pounder. He’s got a pretty good limit going and ought to be pretty close to make the top 30.

We just checked back with Koby Kreiger and he says he has “a few nice ones, but no big ones.” That’s pretty vague, but it will definitely keep him in the top 10, and might be enough for the lead depending on the other relevant factors.

Cameron Gautney is one of a number of A-List rookies this year, and he’s got it going today. With a pair of bigs and three littles in the livewell he’s got perhaps 15 pounds, which should boost him way up from where he started on day one.

On that Tennessee River note, FLW Senior Editor Kyle Wood is on the hunt for Randy Haynes, so hopefully we’ll get an update on the ledge master soon.

It’s been increasingly breezy all day, but it’s starting to blow pretty good now in Harris. We haven’t really seen a pattern with the wind and the bite, but it’s definitely going to make the last dash toward weigh-in a little bumpier.

Brandon McMillan just flipped up a 5-pounder in Dora and says he’s got about 12 pounds. One more good one and he ought to slide into the cut to fish tomorrow.

Over in Harris, Tom Redington has 13 pounds and Dennis Tietje has about 10 pounds.

Pete Ponds and Chris Gosselaar have both dredged up small limits from Harris today and Gosselaar just jumped off a pretty decent one.

Andy Morgan says he’s got a limit for 12 pounds and a dead battery. Someone will pick the GOAT up for sure, but a dead battery is probably cramping his style a lot.

12:48 Shy for Kendrick, Greenblatt seems to be rolling

It’s getting late now, and Jay Kendrick has just four keepers in the boat and none of them are big. Of course, a day-changing fish is just a cast away on the Harris Chain.

It’s secondhand, but apparently Matt Greenblatt is doing well and landed one that is around the 10-pound mark. He’s making the cut for sure with that.

Brad Knight weighed-in two bass on day one and finished the day in 182nd. Today he’s doing better and has one big one in the ‘well with four skippers. Knight finished in the triple digits at Okeechobee, so he’s going to need to step on the gas if he wants to return to Ouachita for a shot at another Forrest Wood Cup win.

Starting the day in 140th, Jimmy Reese has a small limit in the box now. So far it’s not the comeback day he wanted.

Kyle Cortiana says he lost a pair of 9-pounders today and has a limit for about 10 pounds. He’s understandably not in great shape, but says “if I got two big bites I can get a third.” 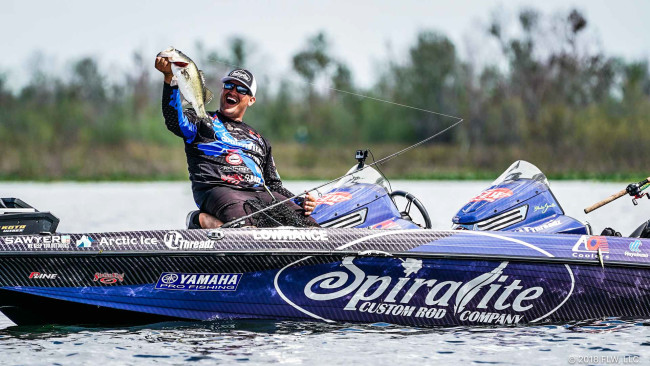 Blake Smith just caught a 5-pounder as our cameraman rolled up and he’s got over 12 pounds in the livewell now. He’s got a check, and one more good one will put him fishing the weekend. 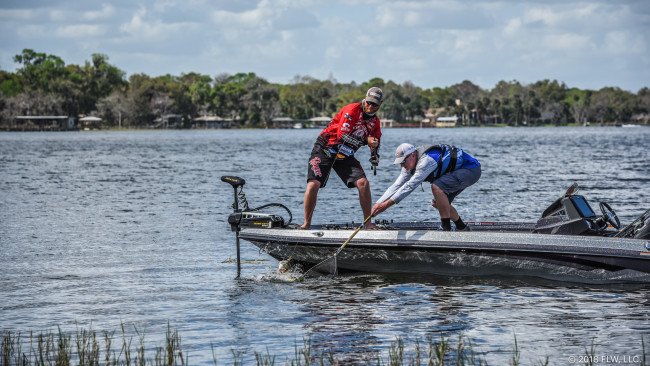 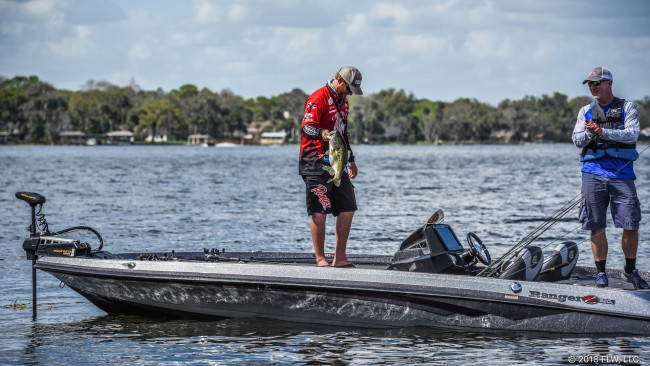 Josh Weaver just whacked a 6-pounder on a bad for his fourth keeper. He’s got a 4-pounder and two rats with it and is working on the buck now. 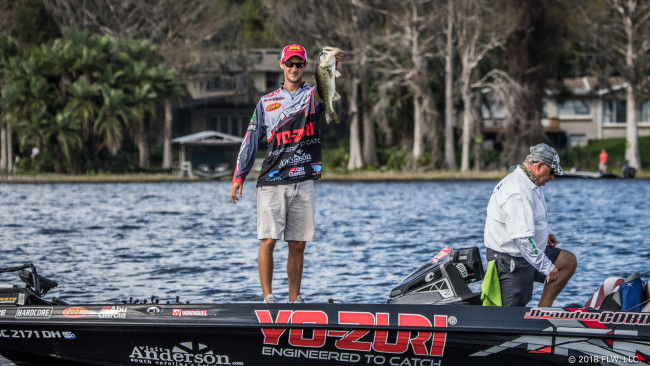 In Harris, Brandon Cobb just popped a 4-pounder on a jerkbait and has a 6-pounder to go with it. His other three a pretty small. 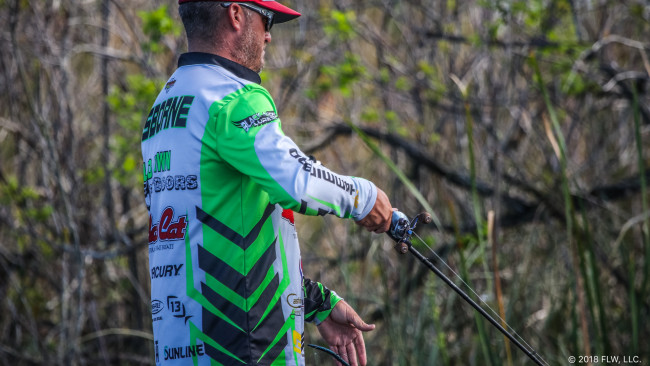 We haven’t found Glenn Browne yet, but the general consensus seems to be that it’s slower in Apopka than it was the other day. The fishing in Harris has been pretty steady though, so we’re still going to see plenty of good weights come weigh-in. We’re about to get off Jamie Horton, so we’ll have some Griffin-based updates soon as well. 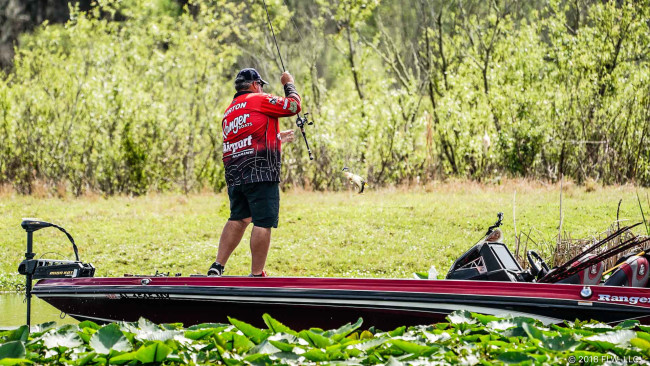 Jamie Horton just put a small keeper in the boat for his fifth. He’s done it all in one marsh this morning, and there seem to be plenty of bucks around, so it could be the sort of place he can camp in for a while to wait on the females. 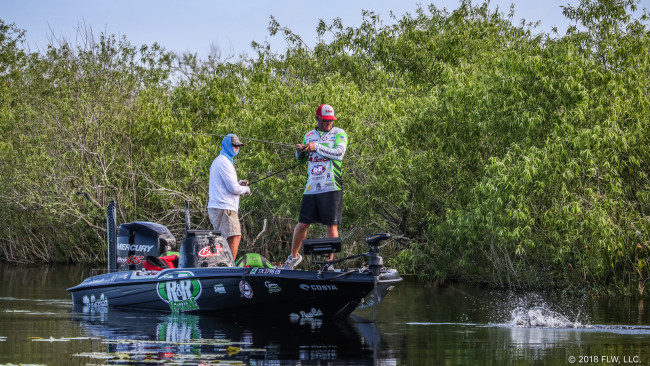 Jordan Osborne still has just two keepers in the ‘well. He just Poled down on a bed, so perhaps something is about to go down, but so far it’s been a slow morning for him. 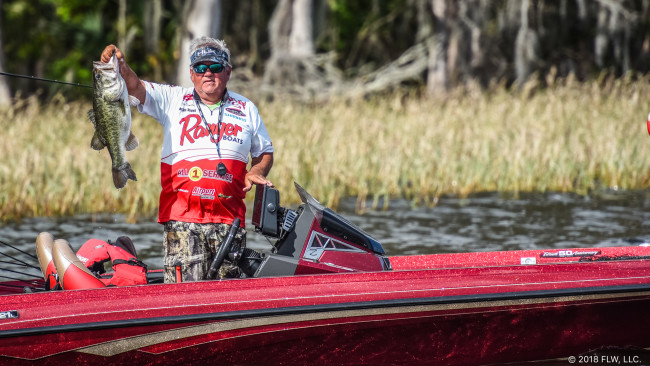 Tony Dumitras is dragging a big worm and has an 18-pound bag and an 8-pounder. Starting the day in 13th, he’s going to make the cut for the first time ever in his FLW Tour career.

Chris Johnston hasn’t caught anything else recently, but we’ve dialed in on how he’s fishing a bit. Off the bank in Harris, he’s alternating between a jerkbait and a vibrating jig.

Meanwhile, Jamie Horton boxed up a 2-pounder for his fourth keeper. 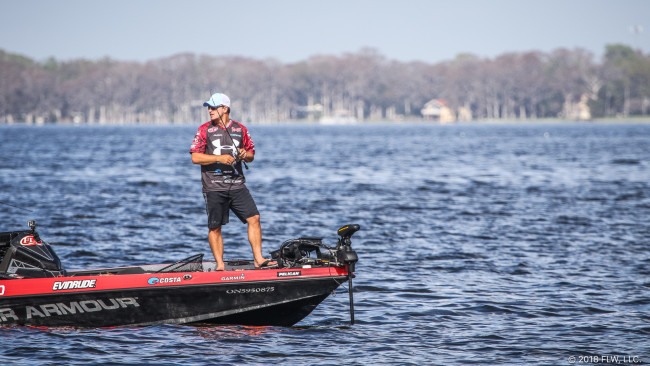 Chris Johnston is rolling with 22 pounds in the box and an 8-pounder. He’s the unofficial leader for sure now.

Elsewhere, Jamie Horton just caught a dink for his third and Zack Birge just made a small cull.

John Voyles has rustled up a 7-pound limit to get his day going. It’s nothing special, but it’s a decent start for sure. 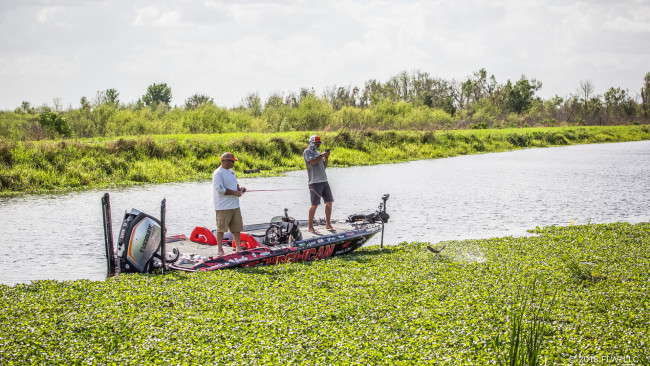 Zack Birge just finished off his limit with another small one. He’s got perhaps 10 pounds in the boat. Limit in hand, he just put down his flipping stick and picked up a prop bait.

Bryan Thrift has a limit for what he figures is 13 pounds. So, you can lock him into the top 30 with another 16 pounds or so in all likelihood.

Mark Rose has an early limit as well, but for about 11 pounds.

Russell Cecil has had some terrible mechanical luck this week, but he’s on the water now and fishing. So far today he’s got one good one and one dink. If he can rustle up 25 pounds or so today he could salvage a ton of Angler of the Year points.

Per the comments on Carl Jocumsen’s YouTube live he’s got one small keeper. 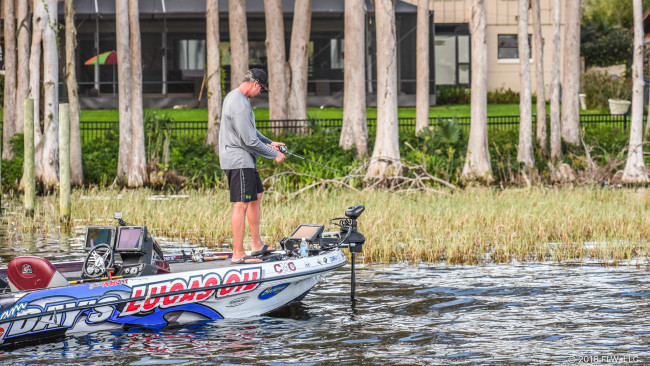 Shawn Murphy has three little ones in the boat. He’s got a GoPro on him today and he seems to think it’s bad luck.

Zack Birge has been flipping hyacinths and trash on the edge of a canal with either a ¾- or 1-ounce weight. Birge says he gets more bites with the lighter weight, but he can’t get through the trash as well with it. He’s missed a handful of bites already today, so the fish are definitely there. And now he's got four, though his fourth is very small. 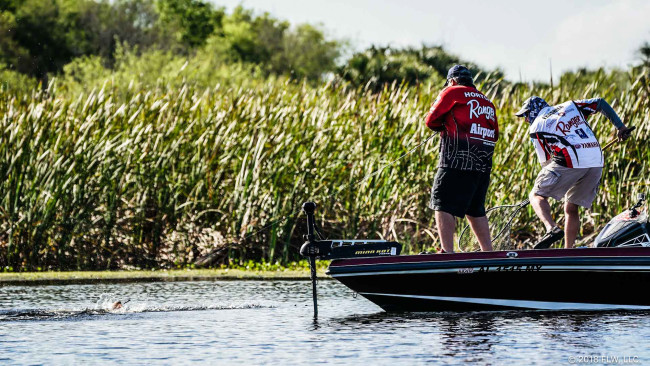 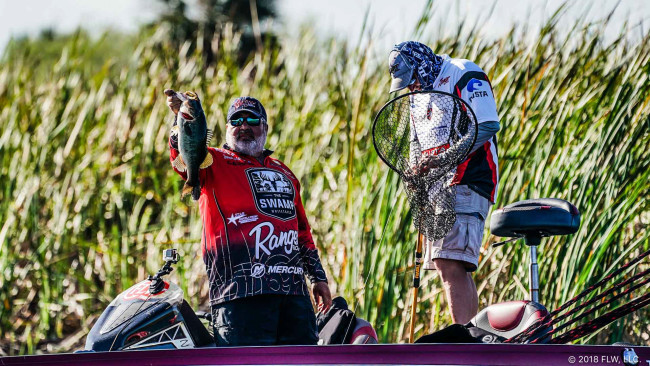 Jamie Horton just caught the female off the bed. Neither fish were as big as he thought – he’s not got about 6 or 7 pounds. On the plus side, as he pulled away from that bed he happened on another and put the Poles down.

Down by Apopka, Zack Birge has boxed a little one for his third keeper. 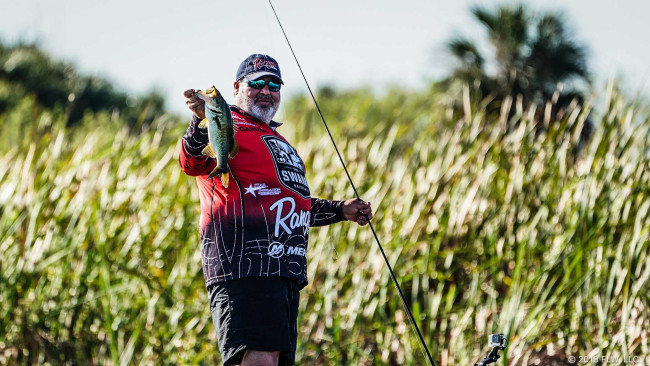 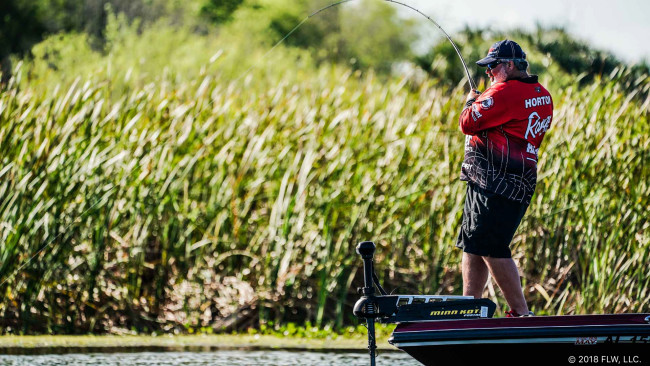 Jamie Horton just caught the buck off the bed and boxed it. It’s under 2 pounds. Down in Apopka, Zack Birge just flipped up one that’s close to 3 pounds for his second fish. 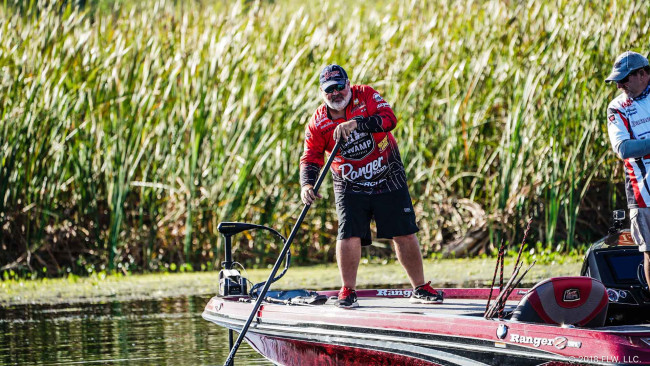 We’ll see how it develops, but Jamie Horton has sighted up a pair on a bed. One is about a 5-pounder and the male is just a solid keeper. Horton is an excellent sight-fisherman, so his chances are good, but this might take a bit.

Jordan Osborne has one keeper in the ‘well to start his day. 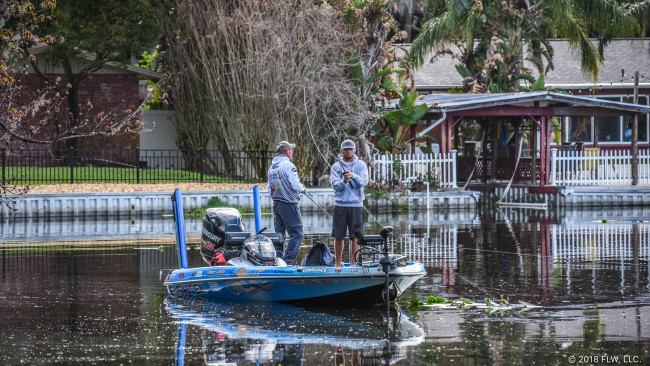 Sheldon Collings and Tim Cales are both in the 9th Street Canal. Collings has had a few misses on a frog and Cales has one 2-pounder in the boat.

There was a decent breeze at takeoff, but it’s backed off quite a bit now. Down by Apopka it’s a little breezy, but Birge and Osborne are fishing back in canals that are pretty sheltered by the wind. That said, nobody we’re on has caught one since our last report, though Horton has been fiddling with one on a bed with little success.

Jamie Horton made the trek toward Griffin and has started back in a canal. He’s throwing a topwater and working pads and reeds so far. 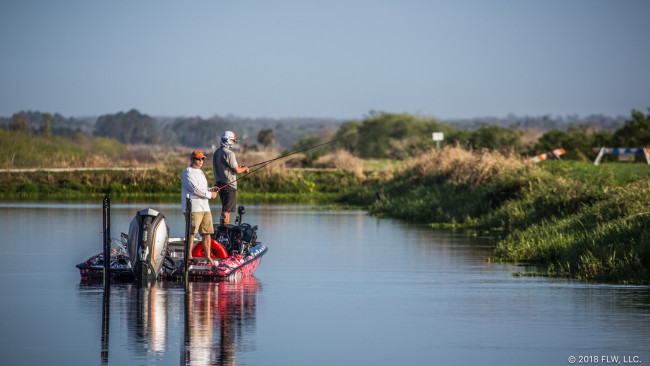 Zack Birge has put down the frog and started his flipping game now. Birge is spacing his flips about a foot apart and fishing quite methodically.

Back in Harris, Cody Meyer just rolled out of a canal with zero fish and says he’s headed for Griffin. 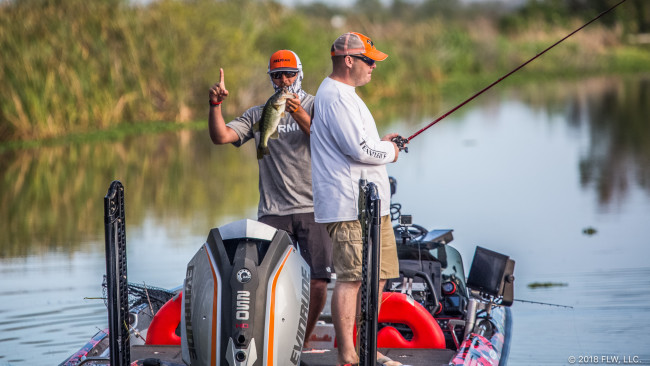 Zack Birge started fishing moments ago in the canals around Apopka and just boxed up a 2-pounder on a frog. That’s a good start. 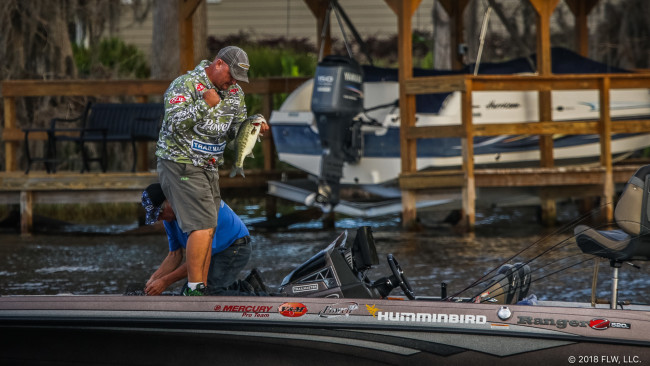 Still slinging the jerkbait, Koby Kreiger just culled up with a 4-pounder. He’s got over 10 pounds now and has been fishing for barely an hour.

Koby Kreiger just finished out a small limit worth perhaps 8 pounds on a jerkbait. He’s fishing around some offshore grass within sight of takeoff with a few other pros. He didn’t sound super confident about his ability to catch bigger ones, but now he’s got all day to do it. 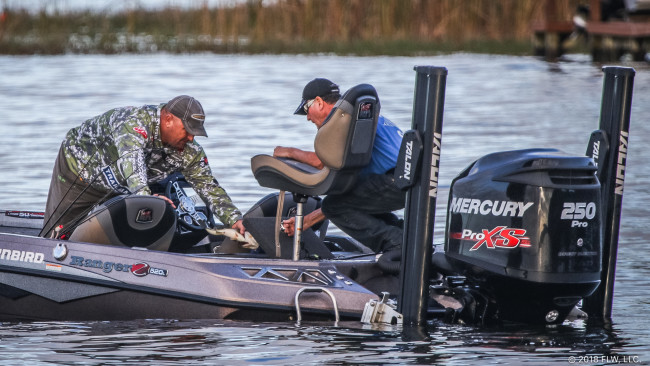 7:45 Kreiger gets on the board

Koby Kreiger, Todd Auten, Bryan Thrift and Jeremy Lawyer all started in roughly the same area near takeoff. Bryan Thrift boxed up a good one in the distance, and Kreiger is on the board early with one little one.

GoPro videos from day one

A number of the leaders are fishing quite far from takeoff in or around Lake Griffin and Lake Apopka. For the Griffin crew it will be at least 50 minutes until they start fishing. For Apopka, it’s going to be more than an hour. So, it’ll be a bit of a wait until we get updates on a bunch of the leaders. 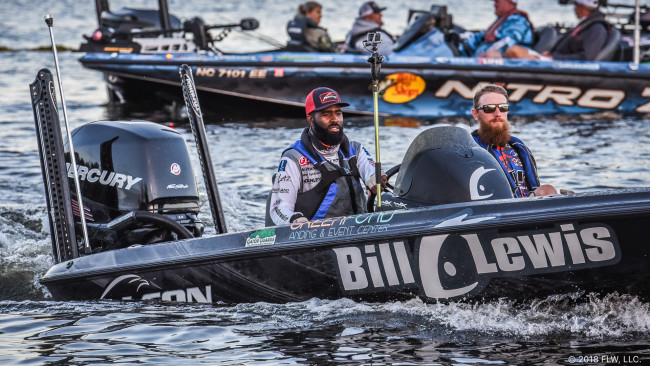 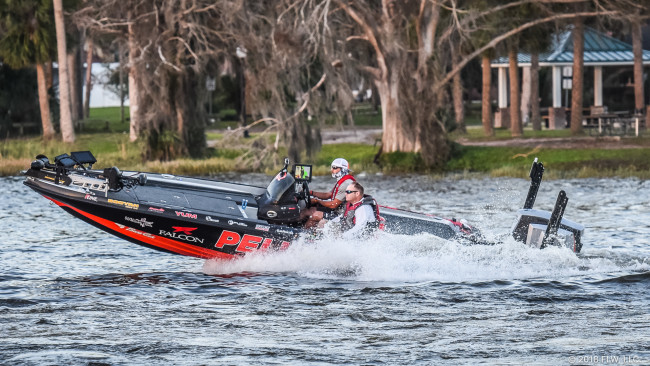 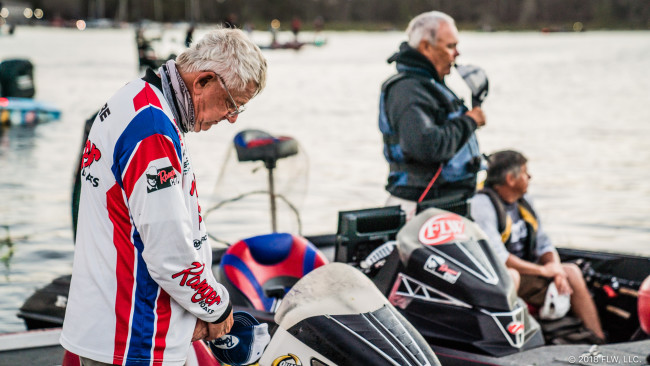 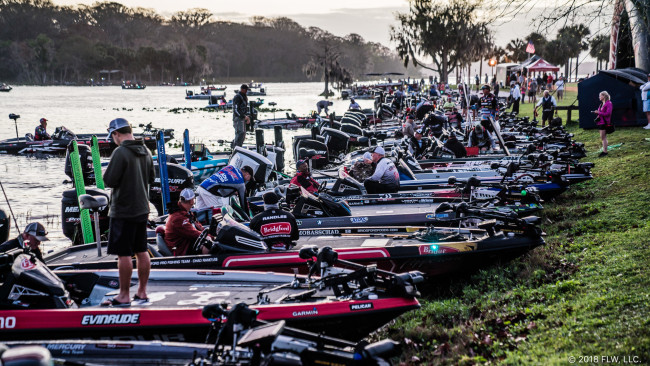 7:00 It’s another beautiful day for fishing

Day one of the FLW Tour presented by Lowrance on the Harris Chain was simply spectacular, and it looks like day two is going to be in the same vein. Like it did on day one, the warm and stable weather should keep both the anglers and the bass happy.

Though plenty of bass were caught offshore on the first day, bedding fish stole the show to a degree. That said, it does seem like the anglers on the sight-fishing game will be hard-pressed to keep it up. Many pros have expressed a degree of skepticism about the sustainability of such a program given the current conditions, and it’s likely that at least a few of the top anglers drop. On the flip side of that, there are definitely still fishing moving in, and the peak of the bite on day one was late in the afternoon – there’s comeback potential for anyone who can hit a new group of bedding bass just right.

Some of the top pros do appear to be pretty confident in their ability to sustain things shallow (Jordan Osborne and Glenn Browne come to mind), but today could be the day that someone fishing off the bank really begins to put the screws to them. Anthony Gagliardi is great at pretty much everything and flew by the 20-pound mark with ease on day one. Another strong day offshore in the hydrilla and eelgrass could easily see him or someone else in the top 30 threaten for the lead.

The only disappointment of day one was the lack of a 30-pound bag. Though it’s going to hard to do on day two, the potential is definitely out there. We saw some really big fish hit the scales on day one, and that trend is likely to continue. It’s Florida, and these lakes seem to be loaded with big ones.