All three phases of the spawn play 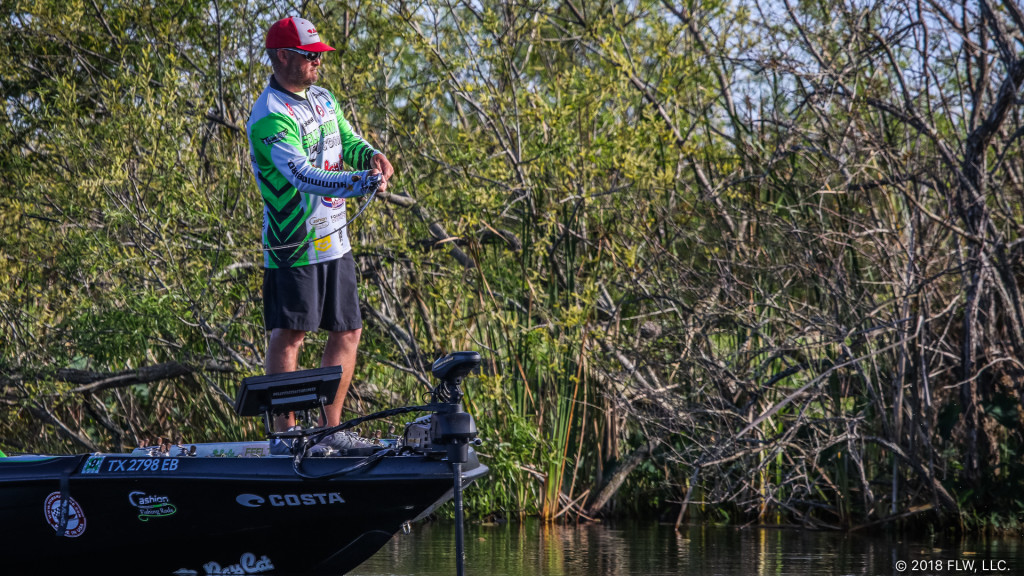 Cruising around the Harris Chain on day one of the FLW Tour event presented by Lowrance, it looked like prespawn and postspawn fish would end up comprising the bulk of the day’s catch. Most pros were “fishing out,” in areas where bass would theoretically be staging on their way to and from spawning areas. And that pattern did produce plenty of limits. Yet, the top 10 was split up among pros exclusively targeting spawners, pros targeting a combination of spawners and prespawn/postspawn fish, and pros strictly fishing offshore.

Jamie Horton, the day-one leader, combined a shad spawn pattern with bed-fishing to catch 24 pounds, 13 ounces. Here’s how the rest of the top five got it done on Thursday. 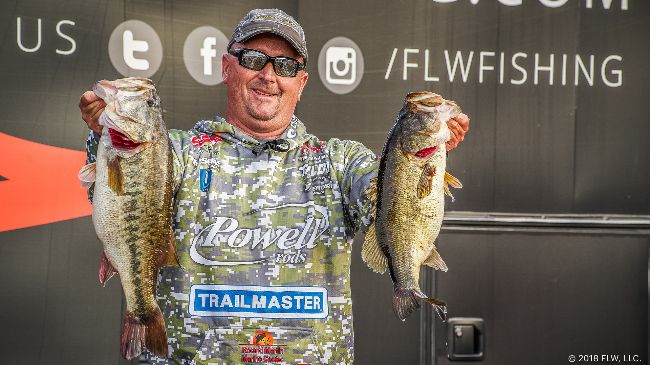 It was a phenomenal day and a disappointing day for Koby Kreiger. The Florida pro landed nearly 27 pounds of fish, but his official weight stands at 24-12 because Kreiger was assessed a 2-pound penalty after he violated rule No. 9 by running the main motor while he was on the front deck. He’s now 1 ounce behind Horton.

Kreiger is known as one of the sport’s best sight-fishermen, and he had to pull out all his tricks today to overcome the 2-pound penalty, which had been assessed before the tournament, in order to stay in contention. An 8-pound, 7-ounce kicker certainly helped his cause.

“I caught some of them sight-fishing, and caught fish pretty much all day,” he says. “I caught all but one on a bed. That big one was not on a bed. I was fortunate today.”

Kreiger says there aren’t many fish left in his best areas for tomorrow, and because he had to “burn ’em up a little” today he’ll probably cover a lot of ground on day two.

Still, you can’t count him out. Not in this state on this lake during this time of year.

“I did a lot of looking. I fished a couple of different lakes and did some running around. I like this time of year when that stuff [spawning] is going on.” 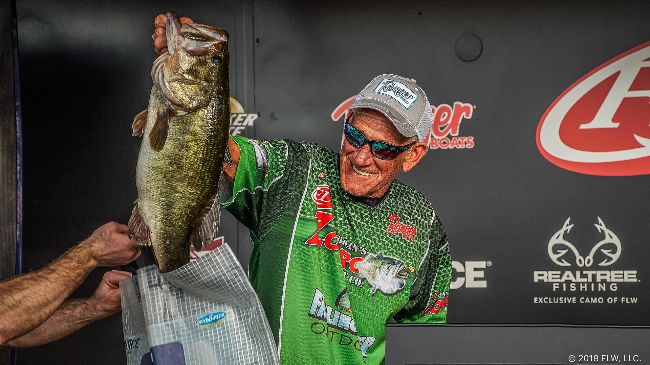 Kentucky’s John Devere picked up one bait this morning and never put it down en route to what he describes as a really lucky 24-pound, 4-ounce performance. That bait was a Zoom Ol’ Monster worm.

“I caught a limit first close [to the bank] then backed off offshore and culled them out,” says Devere, who pitched the worm to reeds and pads to get things started.

While offshore, he worked back and forth over a large grassy area that was about 10 feet deep, focusing mostly on edges in the grass. Though his bites were spaced about an hour apart, Devere still managed to land about 20 keepers on the day. 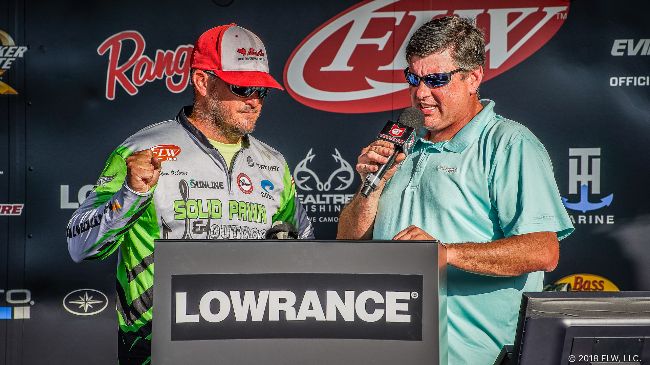 Jordan Osborne is sacrificing quite a lot of fishing time – an hour or so each way – in order to get to and from his best fishing area. Once he gets there, Osborne is pretty dialed in on a section of water that, although it’s too stained for sight-fishing, is quite a bit cleaner than everything around it, which he believes is the reason for his day-one success targeting spawning bass.

“I’m not looking at anything, but I’m quite certain they’re on beds,” he says. “I’m just casting around and fishing real slow. I have seen some beds up shallow, but they’re empty.”

Tomorrow, he plans to fish the same area.

“Because of the quality of the water, I think more [spawners] will come up,” Osborne adds. 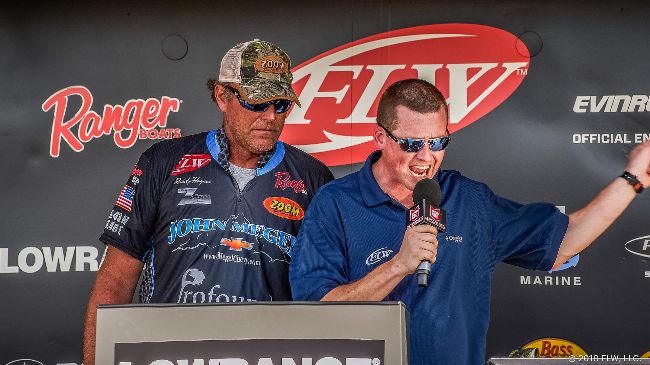 You can’t complain a whole lot about a 22-pound, 8-ounce limit, but Randy Haynes still seemed disappointed that he didn’t bring more to the scale today. Haynes says he never really could get dialed in, particularly in the morning, and wound up fishing a mix of tactics both in and out.

“I went out this morning and missed the early bite,” he says. “Then I just got one or two good bites.”

Throughout the day, Haynes noticed that the fish in his area were just starting to come up, and he even spotted some schooling activity. They’re not spawning in numbers on the bank yet – at least not where he’s fishing – but Haynes expects even more fish to move up in the coming days. Interestingly, he actually blamed the nice weather for some of his frustrations. According to Haynes, if the temperature would fall and the water would cool back down to prime spawning range, a big wave would possibly move up.

Haynes has a late check-in time on Friday, so he plans to bounce around and fish a similar mix of spawning areas and offshore spots to maintain his spot within cut range. 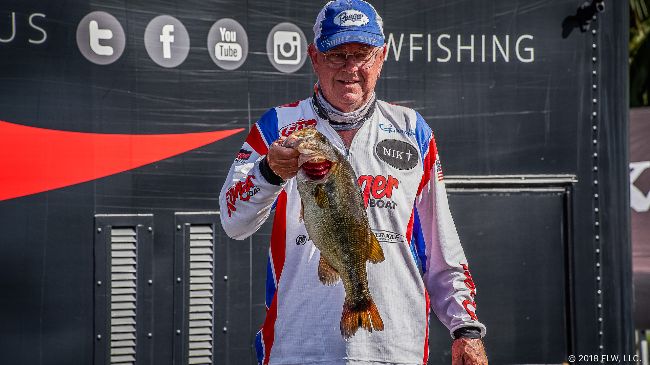 Tied with Haynes for the fifth-place spot is Alabama pro Harry Moore, who camped in one primary area for the entire first day. Moore did have to share his water with young gun Jared McMillan, but it’s a big area, and Moore believes there’s a solid population of fish there to sustain him until the weekend.

Moore says that in practice he was catching small fry-guarding male bass, but this morning he landed several larger male bass that had moved into the area. Then in the afternoon, and for the first time this week, he started hooking into spawning females. Because of the change, he believes he’s on the right track in his money spot, and the fishing could continue to improve.

“They live there,” he says, “but they’re just starting to move up. Around 11 is when the big bass started to bite.”