Weigh-in is going to be awesome 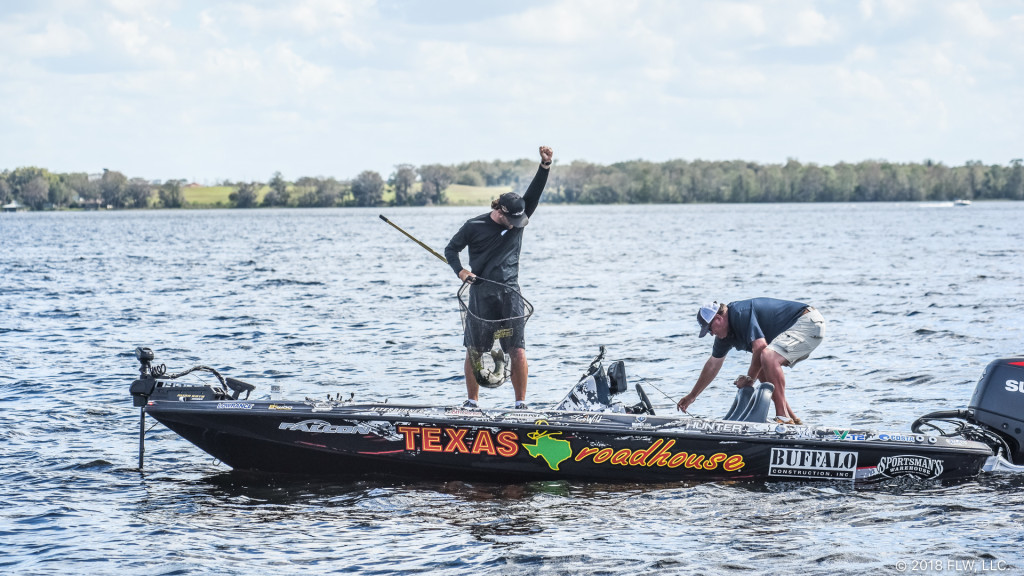 With weigh-in at 4 p.m. ET and check-in at 3:30, we’re closing the blog down. We might get some more updates, but so far it seems like the afternoon flurry we expected hasn’t really materialized – it was more a noon flurry. One thing is for sure – weigh-in is going to be pretty dramatic, as weights are clustered about at tight as can be. Also, we'll probably keep updating the live weight estimates, so if you want to really dial in that's the place to be.

Fishing a loooooong way from takeoff, Glenn Browne just now left his flipping grounds.  He's only got about 15 pounds in the livewell.

Jeff Gustafson just rolled back to where he had his final flurry yesterday, and everyone is pretty much getting ready for the last stretch. Check-in is at 3:30, but there was a flurry of schooling activity yesterday right before then and everyone wants to be ready to take advantage of it.

John Hunter is perhaps trying to pull an Andy Morgan on us. We think he may actually have more like 23 pounds, which would jive with our light estimates from yesterday and put him basically tied with Chris Johnston for the lead. So, weigh-in is going to be pretty interesting.

Tony Dumitras finally caught his second keeper of the day, but this one was no 6-pounder. It’s a little dink, but with such a good starting weight it still rocketed Dumitras back up the board.

Chris Johnston is hopping around a little to let his flurry spot rest. Jeff Gustafson is on his main juice – he’s grinding for one more big bite.

Chris Johnston has caught a few more since his little flurry died off, but none of them have helped. Plus side, he’s getting bites and in Florida one the next one could always be a giant.

Anthony Gagliardi has made it back into Harris now to fish offshore. His morning foray into the canals was pretty much a big waste, but it seems to be going down in Harris today so he might start culling in a minute.

12:45 Apparently the fish wanted to be famous

It seems like as soon as FLW Live stopped for the day the fish quit biting. It’s amazing how little flurries can happen all across the lake, because for a minute there basically everyone was crushing. Of course, the odds are good that there's another flurry or two to go.

Jeff Gustafson just put a 4-pounder in the box and has culled his way up past 20 pounds. Of course, with Chris Johnston’s recent flurry he needs even more than that now. 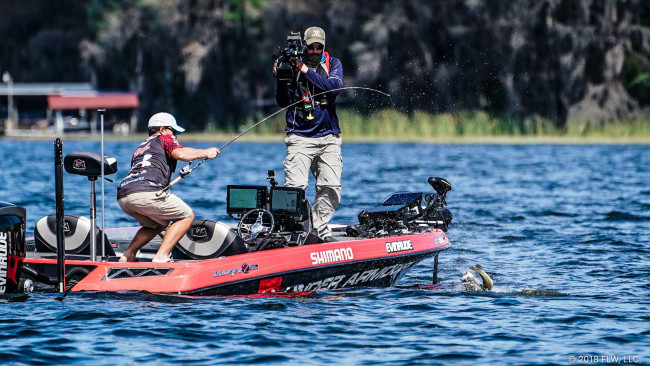 Chris Johnston has found ‘em again for sure – he’s culled three times with 3-pounders (one might be a 4-pounder) in the last 20 minutes and looks like he might be a bite away from widening the gap in a big way. He’s still offshore with the vibrating jig, and it’s been a killer for him so far.

Chris Johnston has caught two 3-pounders in the last couple of minutes to cull up to close to 14 pounds. With that, he’s got the lead again by a smidgen. 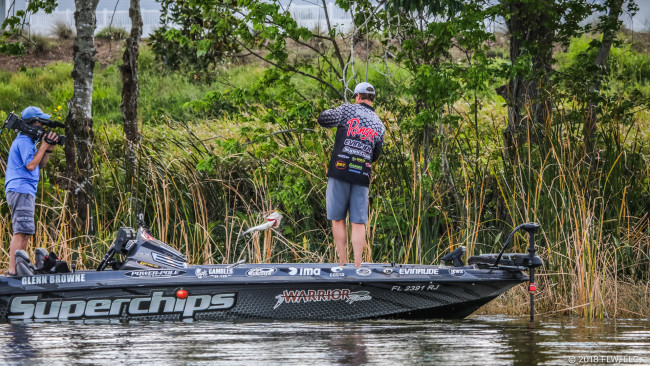 Glenn Browne and Chris Johnston both just culled with 3-pounders at almost the same time. Currently, the top five is unofficially John Hunter, Jeff Gustafson, Glenn Browne, Chris Johnston and then Buddy Gross. Gross only has 67 pounds or so, but everyone else is clustered tight to the 74-pound mark. 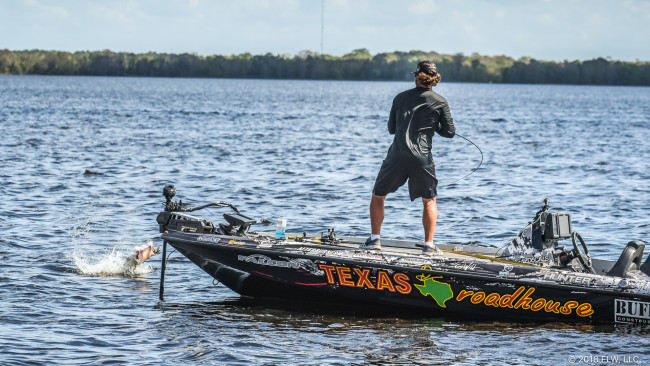 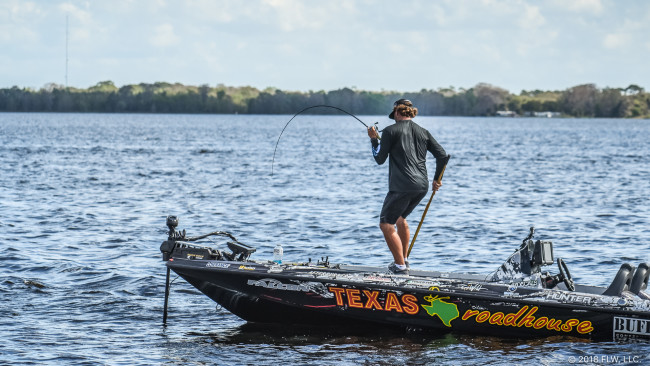 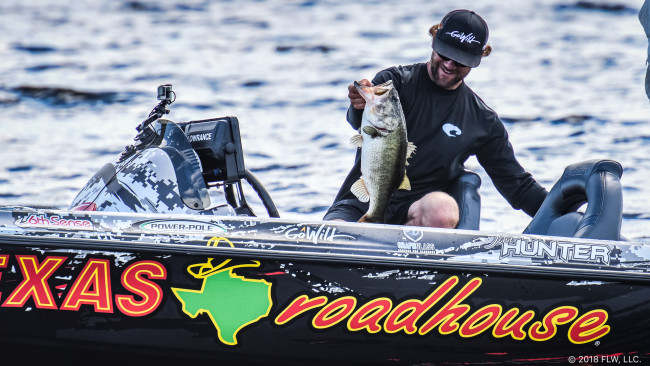 John Hunter culled a bit ago with a 3-pounder and then caught a 7-pounder on a vibrating jig almost as soon as he got done culling. He’s now in the lead with over 20 pounds on the day.

11:50 Johnston is moving and grooving

Chris Johnston has been moving around a bunch lately looking for that next flurry. He’s still committed offshore, but he hasn’t been able to get them going again in quite some time.

Jared McMillan was around a ton of big fish yesterday in Lake Denham. He caught two of them, but most of them were cruising and hard to pin down. Today he’s caught one big one and three little ones and now has about 10 pounds to his credit.

Glenn Browne’s fifth keeper is just a dink, but it is undeniably a sign that things are heating up for him. 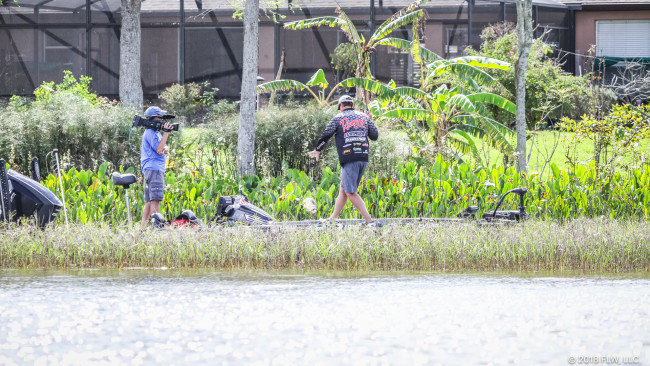 Glenn Browne is heating up. His fourth keeper is a 4-pounder (perhaps a tick bigger) and he’s got over 12 pounds with just four in the box. He’s also back in third place now (unofficially) and in easy striking distance of the lead.

Buddy Gross has made his first cull, swapping out a skipper for a 2-pounder. That’s ticked him up over 12 pounds on the day. It seems like we’re in a slow period now, but there’s a ton of tournament left. The pros don’t check-in until 3:30 today, so there’s basically half a day of fishing to go.

Things might be starting to happen for Glenn Browne. He popped a 2-pounder for his third keeper to jump him back up into the unofficial top five.

Gagliardi just worked a 2-pounder on a bed for 20 minutes and then gave up on it. He’s having a pretty tough day so far.

Tony Dumitras hadn’t had a bite in a couple hours, but he just swung and missed on one. So, that’s something at least. 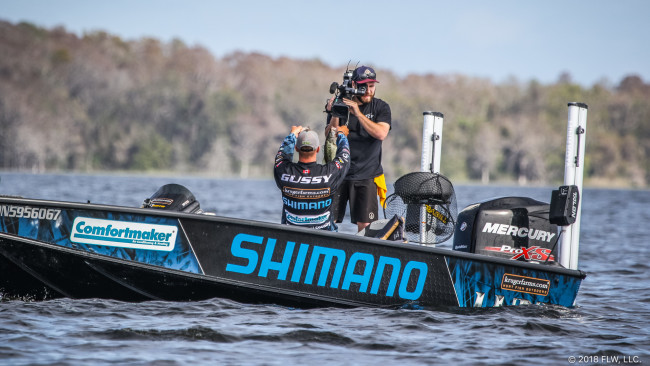 Jeff Gustafson says he’s “got a good feeling” and just put a 3-pounder in the boat in fairly dramatic fashion. He’s now got about 19 pounds and has broadened his lead a little bit over Chris Johnston.

Glenn Browne just made a move a bit ago and has his second fish in the boat now. It’s a solid 3-pounder and we might be about to see him get down to business.

The clouds seem to be breaking apart quite a bit now down on Apopka and Harris. Not that fish haven’t been caught offshore in the afternoon (Buddy Gross mastered it yesterday seemingly), but more sun might be a positive change for Glenn Browne and Anthony Gagliardi. 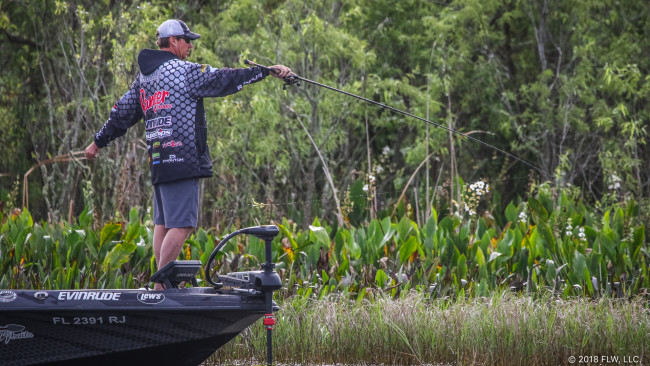 Glenn Browne knows exactly the kind of depth and grass he needs to find, and now he’s started fishing new water. He recycled a little water the other day, and it might have led to his lighter weight. Browne says his fish are spawning, and because of that they aren’t really replenishing.

Glenn Browne is still sitting on one keeper and just made his first move of the day. Offshore in Harris, Chris Johnston made another small cull a bit ago, swapping out one keeper for a 2-pounder. 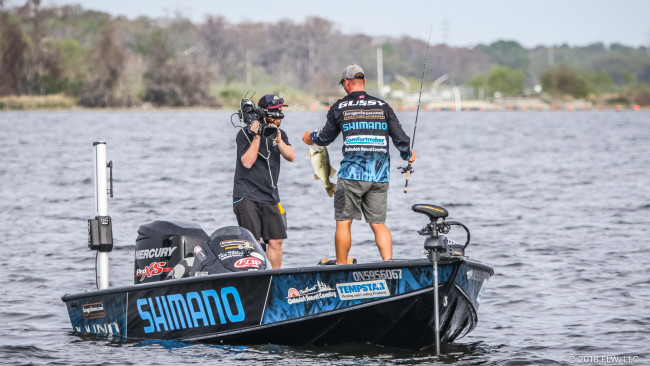 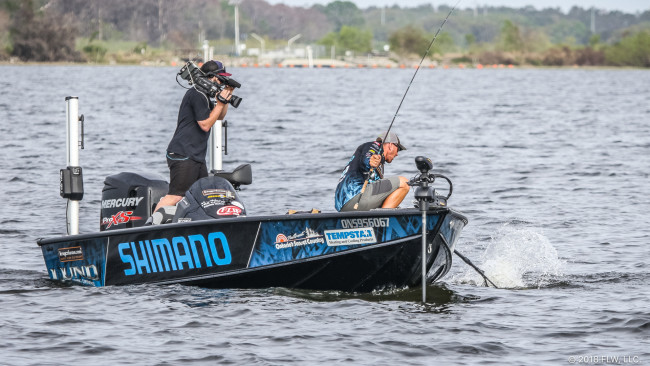 Jeff Gustafson just caught a 5+ on a vibrating jig. It came one of his “big fish” spots and has him up over 18 pounds and unofficially into the lead.

9:20 Still only one for Browne

Glenn Browne is starting to speed up his flipping a little. He’s just got one in the boat and he might be starting to feel the pressure of a short day a little bit. 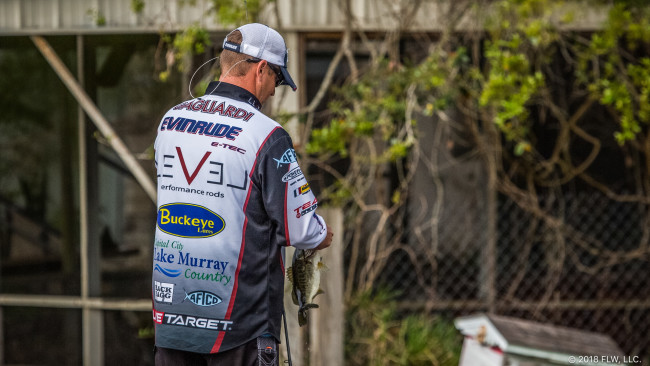 Anthony Gagliardi got down into the canals south of Beauclair a bit ago and just plucked a small keeper off a dock. He’s swimming a jig and whisking his way through the canals looking for bedding bass. 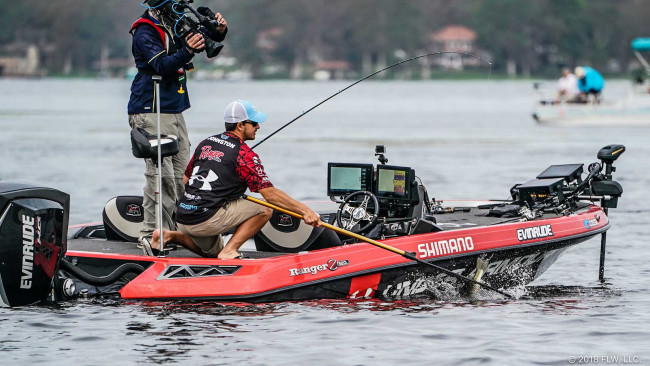 Chris Johnston just switched up to a white vibrating jig like Gussy and caught two in short order to cull. It’s very cloudy and breezy out there now and the fishing seems to be picking up for the schooling and winding guys. 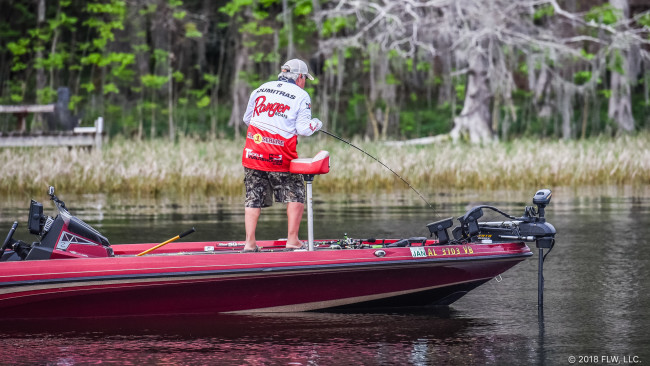 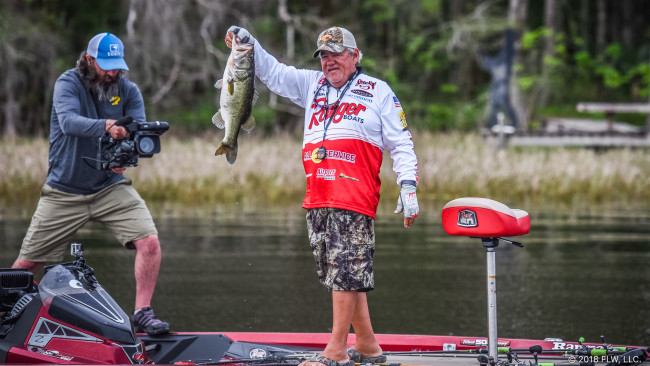 Tony Dumitras just caught his first fish on his worm. It’s a 6-pounder, which is obviously pretty huge.

Also, Jared McMillan started his day with a 5-pounder a bit ago and Glenn Browne is on the board with a decent keeper. 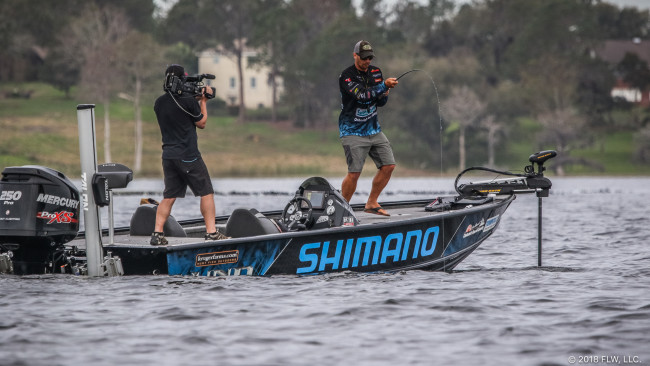 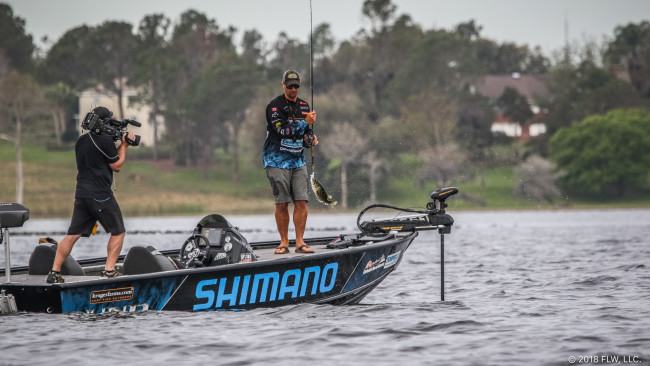 Jeff Gustafson is on ‘em now – he just caught a 2-pounder and a 3-pounder and then culled with a 4-pounder. He’s getting a ton of bites on the vibrating jig over the offshore hydrilla and he can see them under the boat sometimes. It’s getting blustery out there and it is cloudy too – it’s a really good fishing day. Now, Gussy is basically tied with Johnston, he’s got his Talons down and he’s catching fish. 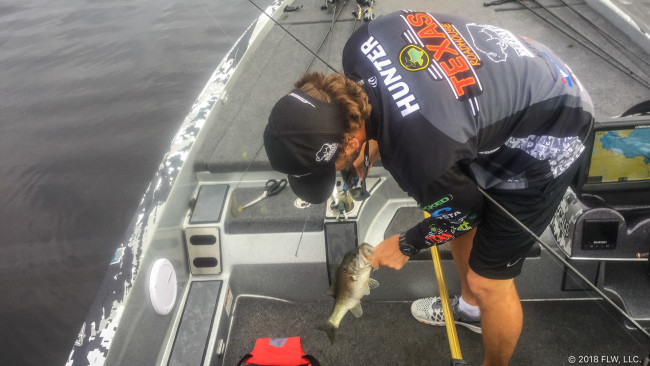 John Hunter has made his first cull after limiting a short while ago. Fishing mostly a jerkbait now, he just replaces a 2-pounder with a 3-pounder to get up near 15 pounds.

Jeff Gustafson just broke the ice with a small keeper on a vibrating jig. A minute later he added another small one and then lost one that he tried to boat flip.

Kurt Dove boxed up a 2-pounder for his fourth keeper. John Hunter has four now as well – three 2-pounders and one good one. 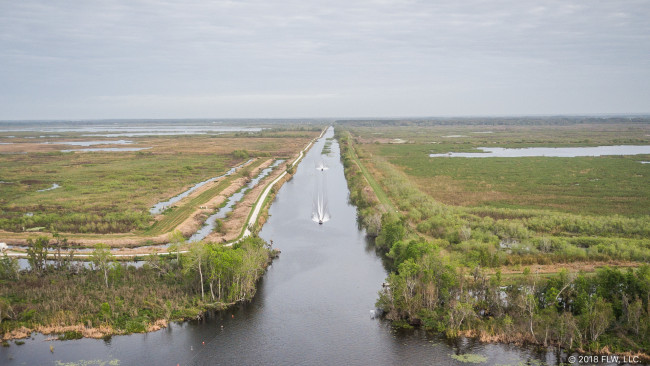 Way down on the south end of Apopka, Glenn Browne has finally started fishing.

Jeff Gustafson has been winding a vibrating jig over a grass flat with no success so far, which is a pretty stark contrast to the rest of the field. Around him, Gagliardi just boxed another small keeper, Kurt Dove has caught three now, and Chris Johnston has caught a few more non-culling keepers. 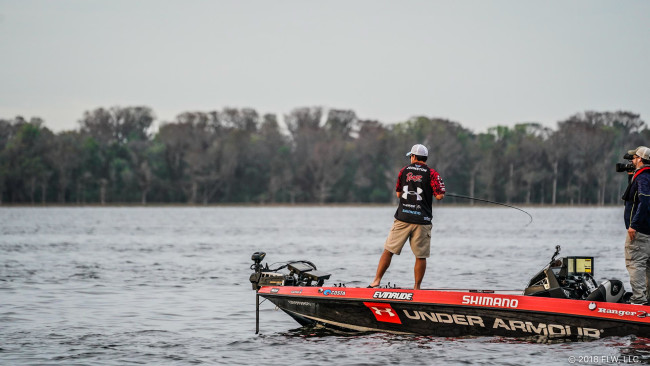 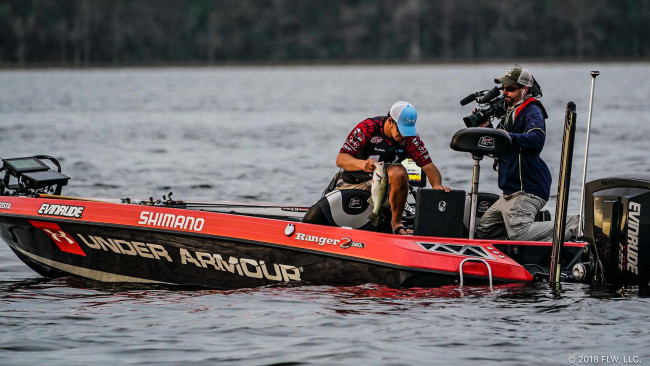 Chris Johnston has caught 10 keepers now with no real size. Though he’s piling the fish in the boat, he still has less than 10 pounds in the ‘well.

Around the top 10, Kurt Dove has a pair of decent keepers in the box now. John Hunter added a 2-pounder. Also, Matt Greenblatt just finished a little limit. 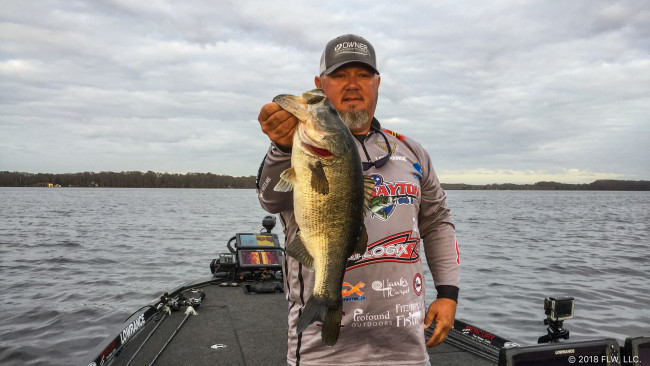 Chris Johnston has culled twice now this morning and is up to perhaps 7 or 8 pounds in the box. Nothing big yet, but they’re getting better. He's doing it all on the jerkbait so far, but just swapped up to the lipless.

Not too far away, Buddy Gross just put a 4-pounder in the boat for his second keeper of the morning.

Elsewhere, Matt Greenblatt has three keepers. Anthony Gagliardi has one and Buddy Gross has a 2-pounder.

John Hunter just started his day with a 4-pounder. He rolled up the leaderboard yesterday and it looks like he might do the same today. Also, Chris Johnston is on the board now – he’s got two small keepers in the boat.

7:12 Nothing for Johnston yet

Glenn Browne will be running for another hour or more, but this time yesterday Chris Johnston had a couple in the boat already. There’s not much wind this morning compared to yesterday, and that could be the difference maker. 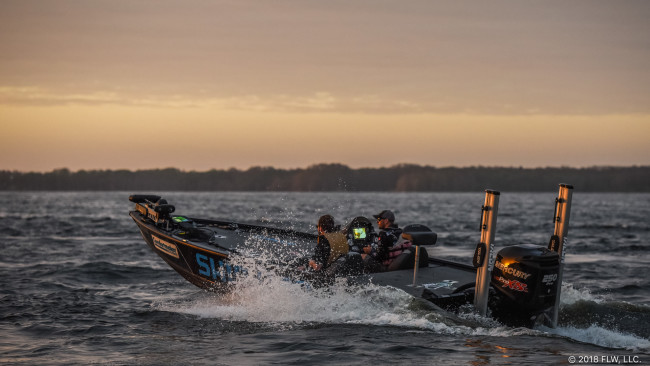 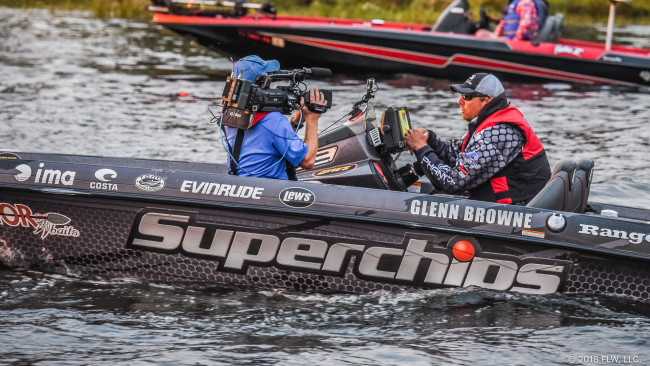 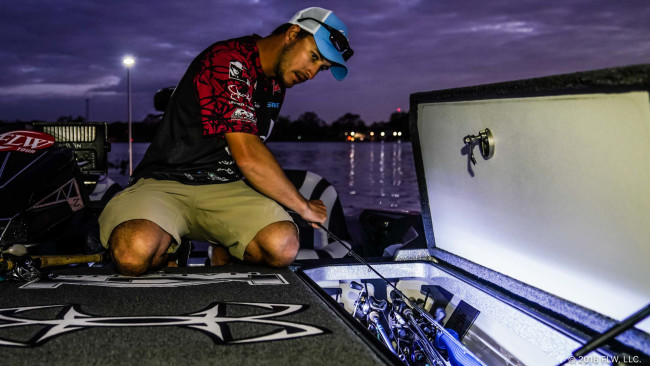 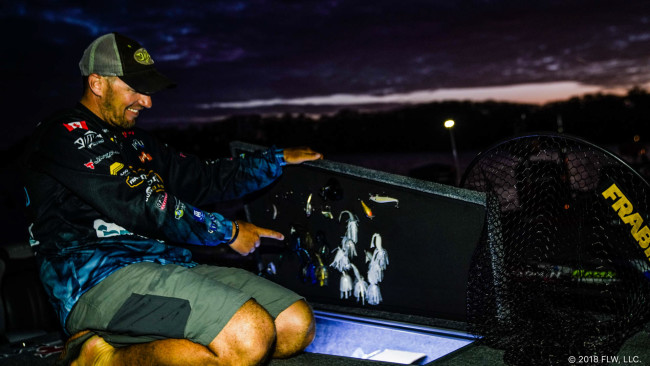 The final day of the FLW Tour presented by Lowrance on the Harris Chain is upon us, and like the rest of the tournament it’s going to be a beauty. It is a little bit cooler this morning, but the highs are actually higher for later in the day, and it should be another spectacular day in Florida.

The fishing has been pretty phenomenal this week, with a bevy of 20-pound bags hitting the scale, but it hasn’t exactly been what most expected. Instead of a lot of sight-fishing, anglers are mixing that with offshore bass in the grass, fishing keying on a shad spawn, schooling bass and plain old slow fishing.

Chris Johnston has mined the shad spawn each of the last two days, and if he can extend his bite until perhaps 9 a.m. he could put the tournament away. That said, there are huge bags to be caught on the Harris Chain and it would be no surprise to see almost anyone make a big move.