Weigh-in is going to be loaded with spotted bass 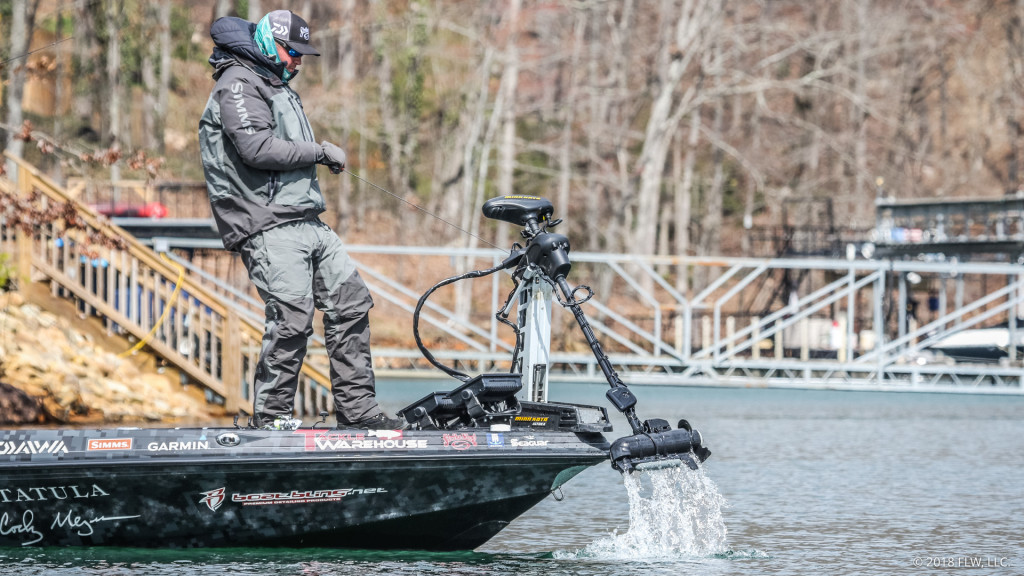 It's time to close down the day-one coverage blog as our on-the-water team is heading back in. Make sure to watch the live weigh-in that starts at 3:00 p.m. We're bound to see some healthy Lake Lanier spotted bass cross the stage.

Add Michael Neal to the list of anglers with a limit around 12 pounds. The bulk of the limits reported so far still seem to be in the 12-15 pound range. Finding a kicker or two may be the difference today. 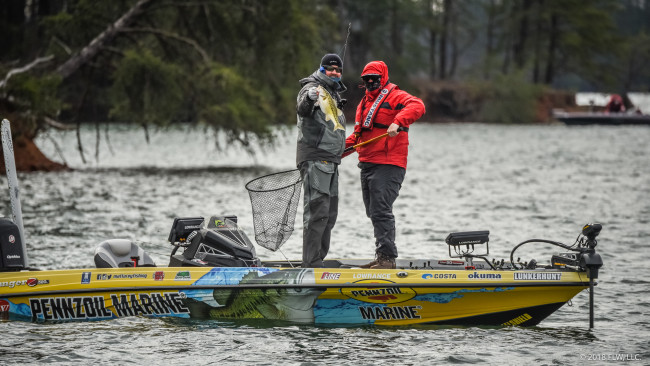 Matt Arey has limited out and our estimate puts him right around 13 pounds as well. Knowing Arey, he might have a little more than that by weigh-in.

Taylor Ashley has a grand total of one keeper bass at the moment. He's lost a few, and is generally having a nightmare day on the lake.

Auburn football legend Barry Wilson just checked in with a limit worth about 13 pounds. That’s an extremely popular weight today.

Alex Davis has a limit at the 13-pound mark now. Davis catches a lot of spots in the winter on Lewis Smith, so this one should set up pretty well for him. 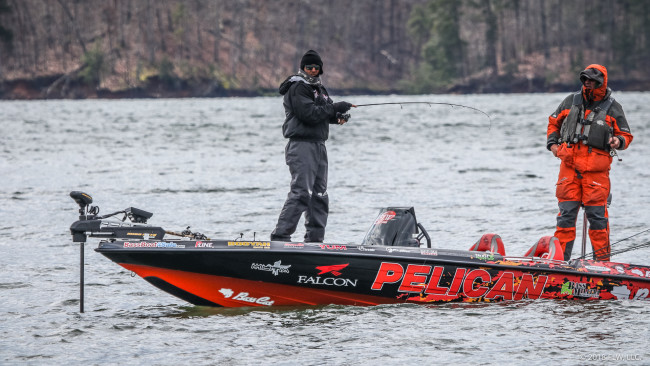 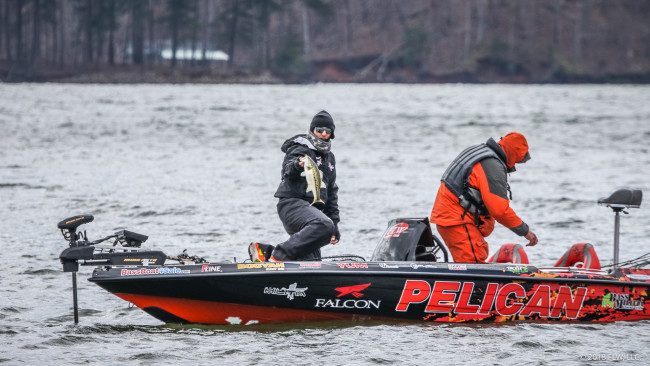 Mike Surman has worked up a solid 15 pounds and Zack Birge has done the same. We’re going to see a ton of bags in that range today in all likelihood – getting to about 16 or 17 pounds will be the key.

The local sticks to watch in this one are David Nichol, Jason Johnson and Rob Jordan, and we haven’t found any of them yet. So, though Scott Martin is surely having a good day, there is some pretty excellent local talent and someone is probably at or above his weight as well.

Buddy Gross just culled up to a bit more than 12 pounds. He’s expert when it comes to fishing offshore, so this one could set up well for the Georgia pro, despite his proclivity for Tennessee River fisheries. 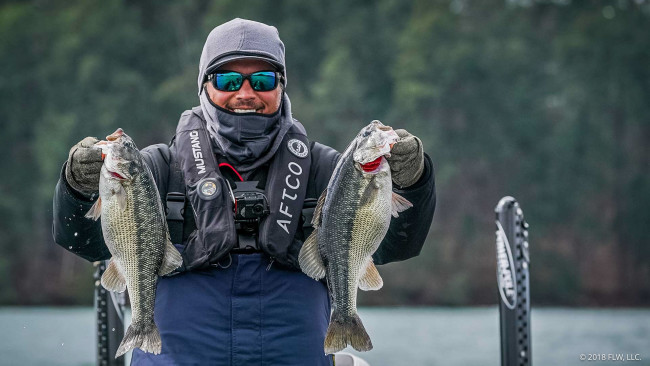 12:25 A limit for Thompkins, Martin has upgraded

Timmy Thompkins has about a 13-pound limit going, which is a pretty solid start. Scott Martin has an impressive 16 pounds in the boat now. He says his goal is 23 pounds, which seems a little ambitious given the cold and windy conditions.

Brandon McMillan has a small limit and is using a spinning rod. Fishing near each other, Chris and Cory Johnston both have small limits in the boat. 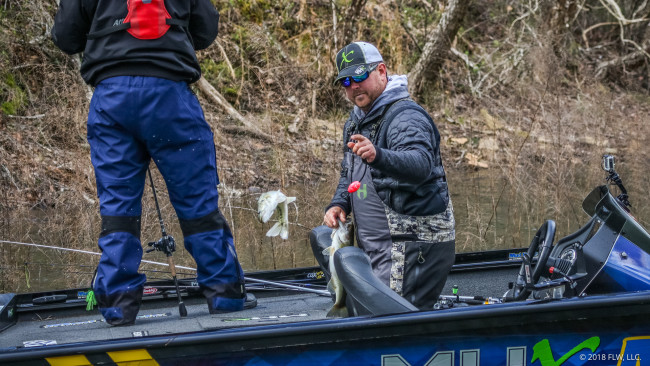 John Cox just culled up by about a pound with a vibrating jig. He’s got a 3-pounder chilling on a bed nearby, but he doesn’t think it is quite catchable at the moment.

11:22 Kenney with a limit, Schmitt with bigs, Nixon on the board

JT Kenney is honestly glad for a break from Florida fishing and he's got a limit to his credit at the moment. Bryan "Juice" Schmitt is rolling pretty good – he's got a pair of 4-pounders and three other keepers going now. Larry Nixon has a limit with four “decent ones.” 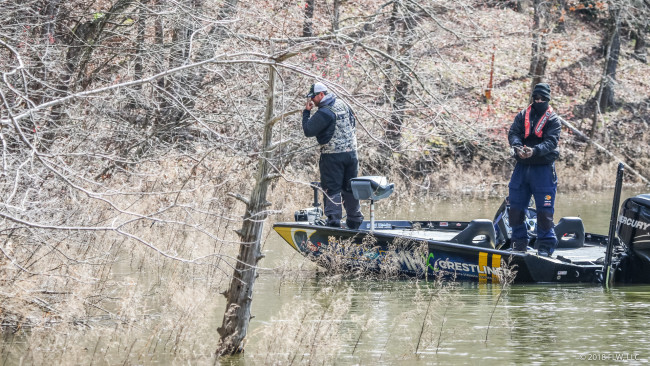 John Cox busted his foot up pretty good at Seminole last week, so he’s a little gimpy at the moment. Though he’s standing to fish, he does have a seat up on the front deck just to be sure. No word on how much weight he has, but he’s fishing for one on a bed now, so he’s probably pretty happy.

Andrew Upshaw says it’s been a tough morning – he’s got three fish in the boat for a total of perhaps 7 pounds. 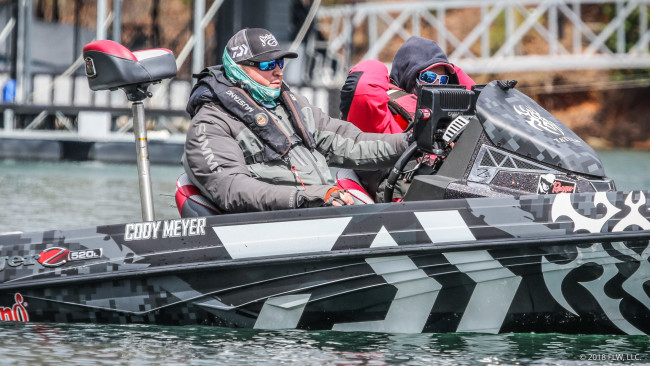 You’ll find this hard to believe, but Cody Meyer has a limit. No word on size, so it is probably unremarkable, but he seems to be living up to his favorite status thus far.

Britt Myers has a limit. Related to that, we have yet to find Aaron Britt or Cody Meyer.

Down in the lower lake, Rob Newell says most of the anglers are really focused on more wintertime patterns still. There’s a lot of video gaming and underspin action going on in 20 to 30 feet of water. 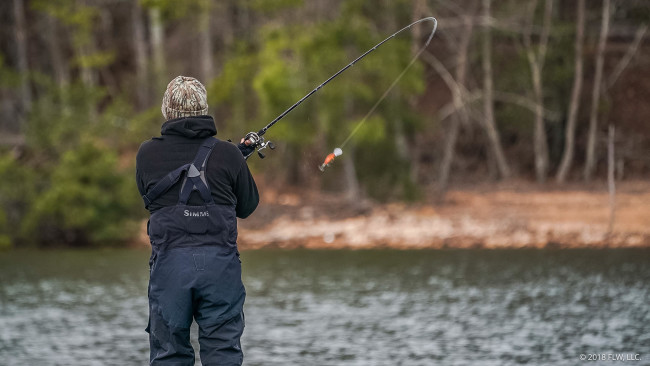 Dylan Hays has joined the crowd with two keepers now. Justin Atkins has two now as well, though his second is just a regular keeper. Curtis Richardson just boxed his second and third (a 3-pounder) – he says he’s getting a lot of bites but is having trouble hooking them. Finally, Grae Buck is cranking and has a limit for about 12 pounds.

Keith Bryan and Curtis Richardson each have a solitary keeper. Bryan could be a real dark horse in this derby – he was the owner of the World Record spotted bass for a bit, and he’s got lots of western experience targeting them. 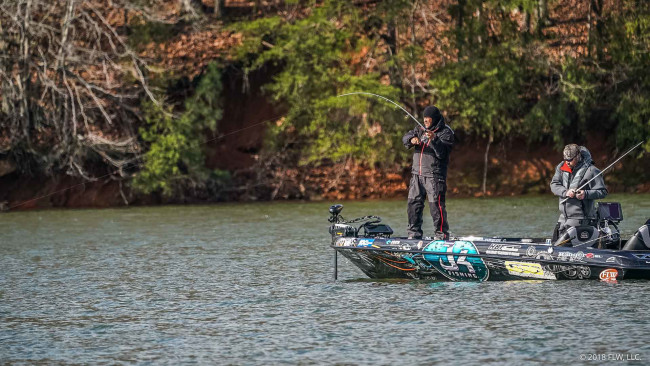 Jay Kendrick has rustled up two keepers so far on this chilly morning. He’s spent a lot of time on Guntersville in the winter, so the weather probably doesn’t bother him so much, but he’d probably like to have more than two in the box now.

9:43 Thrift is culling, other updates

Bryan Thrift has moved down the lake and is culling now. No word on his total, but it seems safe to assume he’s headed for a good day at this rate.

Elsewhere, Todd Castledine and Matt Arey each have two keepers in the boat.

Finally, the lake is beginning to cloud over a little. There’s still some sun peeking through, but there’s considerably less now.

Anthony Gagliardi has a limit of 2-pounders nice and early. He’s one of the best in the word at targeting suspended fish and schooling fish, so if that bite is going to play at all today he should be on top of it. 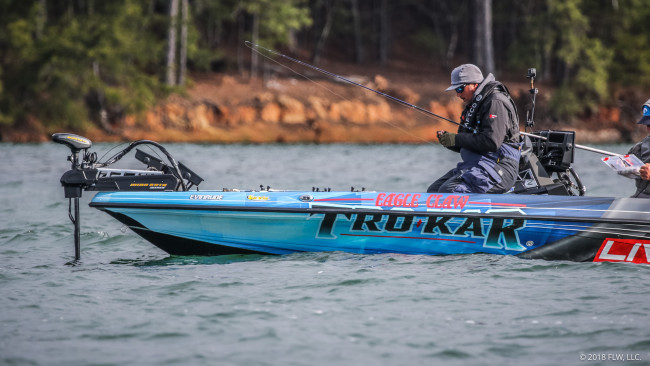 Scott Martin says he’s got 12 pounds and a 4-pounder to get things kicked off. He's only got four keepers, but limits shouldn't be hard this week and a 4-pounder is clutch to have.

Brian Latimer has boxed up a small limit nice and early on day one. He calls Lake Hartwell home, so these Lanier spots should be right up his alley.

Richie Eaves has been working one spot all morning and has three keepers to show for it so far. He’s been mostly just rolling an underspin over the bottom. 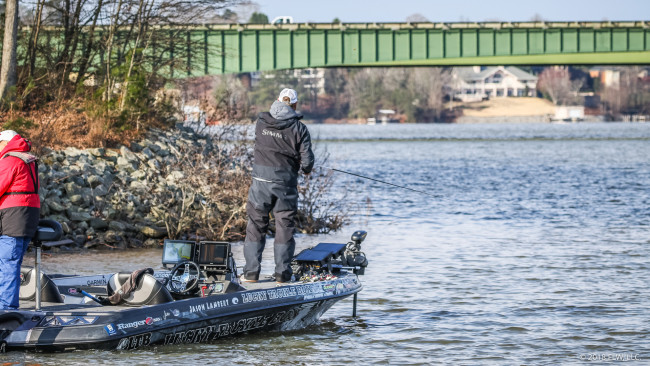 Jason Lambert has the first reported limit of the day. Fishing in the Chattahoochee, Lambert says he’s got about 12 pounds and has three he’d like to cull before the end of the day. 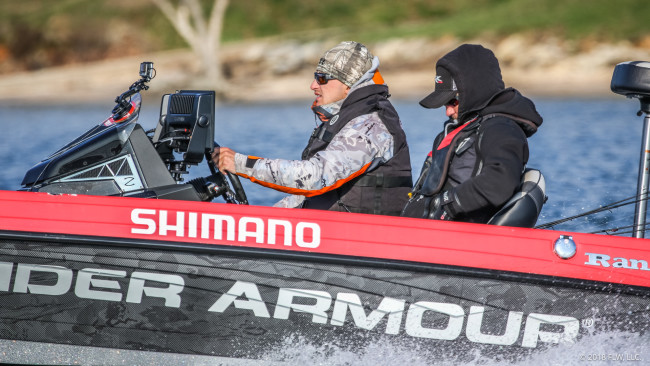 Chris Johnston says he’s missed a few, but he hasn’t put any in the box yet. Nearby in the lower end, Cody Kelley has put two keepers in the ‘well. Also down there, Justin Atkins has a lonely 3-pounder in his boat. 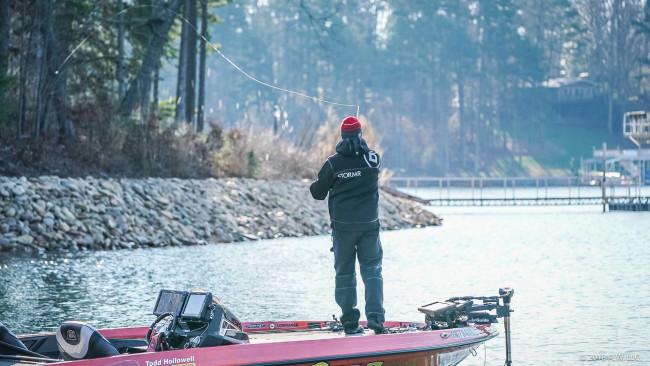 Ramie Colson has one so far, and Todd Hollowell just checked in with three keepers. Just a keeper here is usually better than 2 pounds right now, but you’ll need a few big ones to separate from the pack.

Scott Suggs reportedly had an excellent practice, and he’s on the board early with three keepers. This type of lake should play to his game and it’s probably a welcome reprieve from Florida for him. 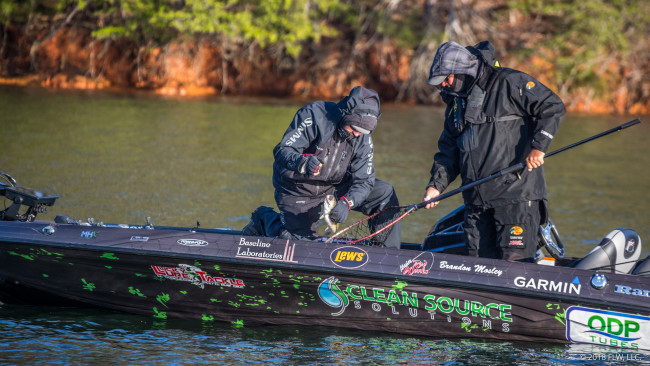 8:20 Mosley has four with more coming

Brandon Mosley just boxed up his fourth spotted bass of the morning. None of them are giant, but they’re all good and he says he’s sitting on a bunch. He says in practice they were all suspended, but now the school is sticking tight to the bottom. 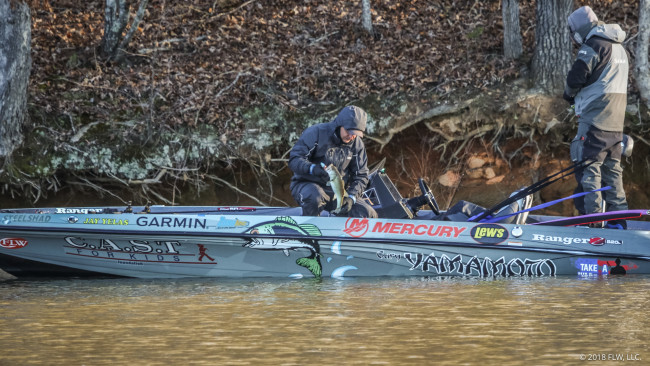 Jay Yelas just put his first keeper of the day in the boat – a decent 2-pound largemouth. He’s one of the anglers who figure to primarily target largies this week. 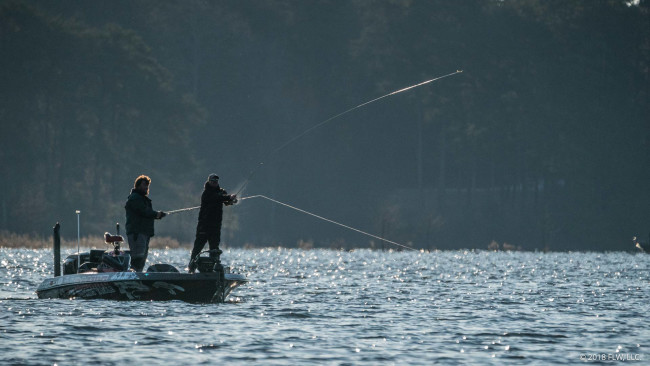 8:05 Nothing for Boo, four for Thrift

Boo Woods started on a schooling spot down the lake and hasn’t come up with anything yet. Kyle Wood saw a lot of schooling activity in his day on the lake with Anthony Gagliardi, so that’s certainly a bite to watch.

Meanwhile, fishing in the Chestatee, Bryan Thrift has four “little ones” in the box to start his day.

7:40 We should have some reports coming in soon

It’s a little bit of a run to get down to the lower section of the lake, but it’s a virtual certainty that someone has put a few in the boat by now. Most of our crew is on the water now, and we should get some updates rolling in pretty quickly. 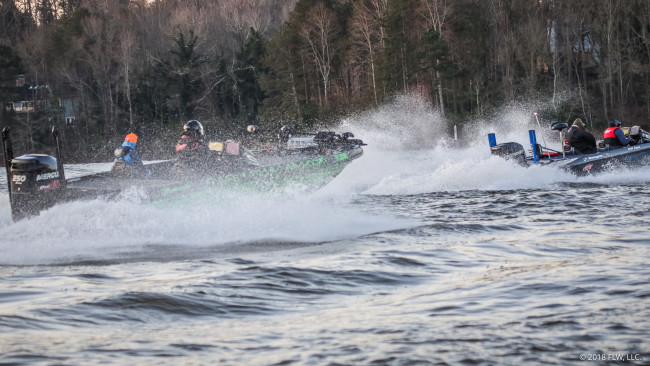 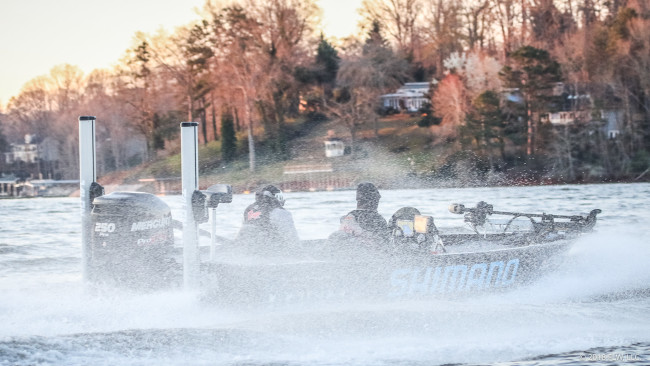 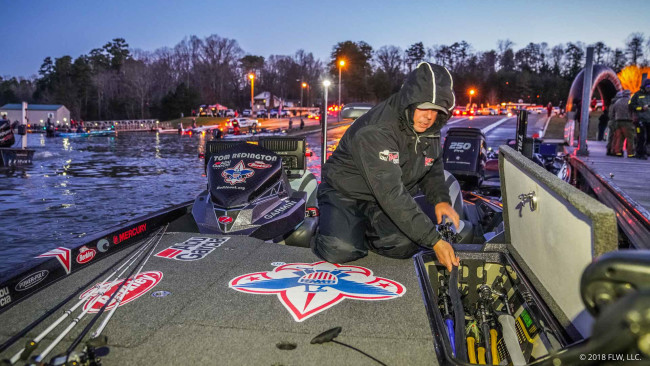 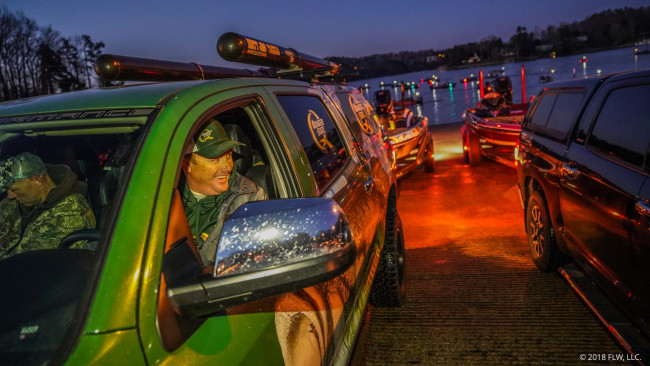 7:00 It’s quite a change from Florida

After kicking things off down in Florida, it’s apparent that north Georgia in March is a different animal than the Sunshine State. Cold and windy after a practice filled with tumultuous weather, the conditions for day one of the FLW Tour presented by Ranger on Lake Lanier are far from comfortable. That said, the weather might not be nice, but the fishing is almost sure to impress.

Practice reports from Lanier put the lake in a predominantly prespawn mode, and the fishing has been very good. Lanier is currently loaded to the brim with 2-pound spotted bass, and it’s got a healthy population of largemouths to go along with the spots. With the lake at basically full pool, there is plenty of shoreline cover for largemouths and adventurous anglers, but the real goldmine is likely to be off the bank and down in the lower end of the big highland reservoir.

With Lanier’s spotted bass population as good as it gets right now, we should see a ton of bags in the mid-teens and the winner may well weigh 20 spots. There’s even a decent shot at some 20-pound bags comprised entirely of spotted bass, though a really big bag is likely to have a mix of spotted and largemouth bass. Jerkbaits and crankbaits and other reaction baits should account for plenty of fish today, especially with the windy conditions, but finesse stuff shouldn't be counted out. There's a reason Cody Meyer is the favorite in this tournament, and his mastery of light line, small swimbaits and other little soft plastics is a big part of that.