They're still catching them on day two 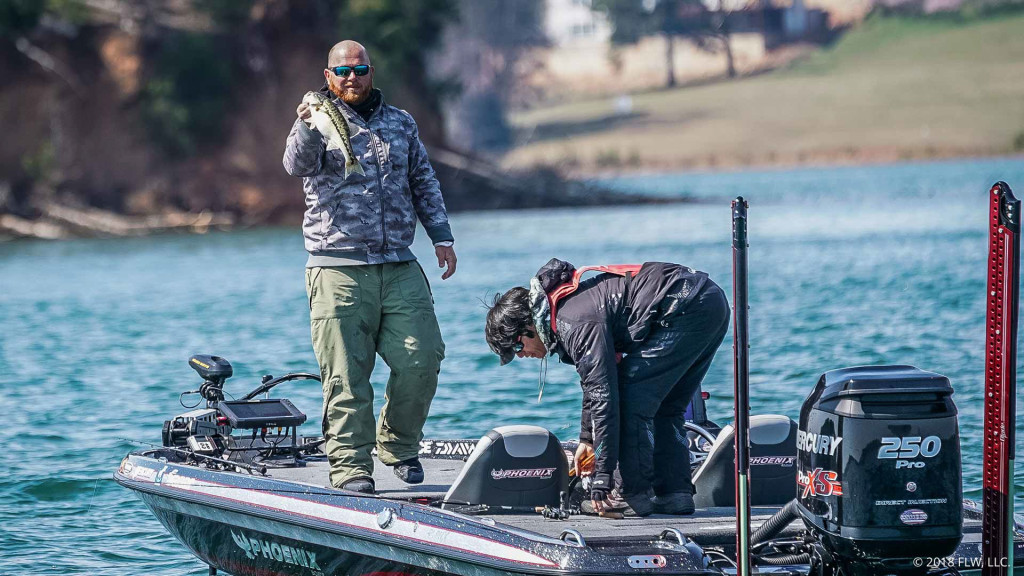 We’re headed back for weigh-in. The fishing was good again today on Lanier, so we’re sure to see some more big bags of spots, and the competition for the top 30 is going to be fierce. Weigh-in starts at 3 p.m. ET, and you can watch it live online or come down for the in-person experience at Laurel Park.

Aaron Britt says he’s up to that magic 13-pound mark now. One or two more good bites before weigh-in and he’ll cruise into the cut. 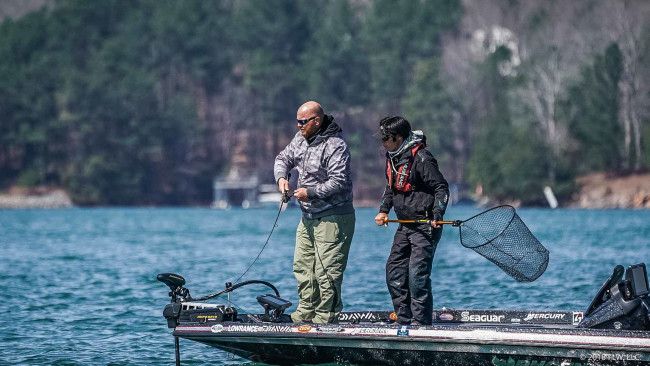 Dragging a shaky head near takeoff Joseph Webster just culled up. He’s probably got near 14 pounds and that ought to put him very close to the cut.

Down the lake, Jason Johnson says he’s got about 13 or 14 pounds. He’s fishing deep with a wacky rig at the moment and ought to be in decent shape to make the cut as well.

Kyle Weisenburger might be headed to his first cut as an FLW Tour pro. The sophomore from Ohio says he’s got about 13 pounds (including a 5-pounder) and he weighed 17 pounds on day one. Even without an improvement he should be in decent shape to fish on Saturday.

Joseph Webster says he’s got about 13 pounds. He’s been living a little closer to takeoff than the bulk of the field, so apparently, there are fish to be had up here as well.

Alex Davis has found himself a 10-pound limit now, but he says he lost a slammer not too long ago.

Blake Smith just caught a 4-pounder and he’s wildly excited (as you would expect). Based on our estimates made while culling, he may have close to 20 pounds. If he does, he could go from 120th to the top 30 with relative ease.

Braxton Sezter just culled his way up to about 15 pounds – he’s having a great day. Mark Rose has checked in with a 13-pound limit as well, and Blake Smith is figuratively in the same boat as Rose.

Bryan Thrift says he’s got 16 pounds of spotted bass in the boat. You can lock him into the cut and probably Sunday as well given that fact that it’s Bryan Thrift.

12:07 Cortiana has a limit and some problems

Kyle Cortiana is currently entirely without a lower unit. We don’t know how that happened, but he’s going to need a friend to get him back to weigh-in. On the plus side, he’s got a limit of spots! 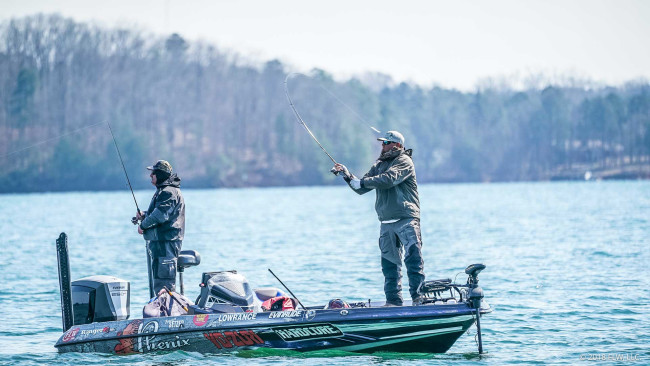 Braxton Setzer did well on day one with an even 14 pounds and might improve on that today. It’s not noon and he’s already got another 14 pounds or so in the boat. 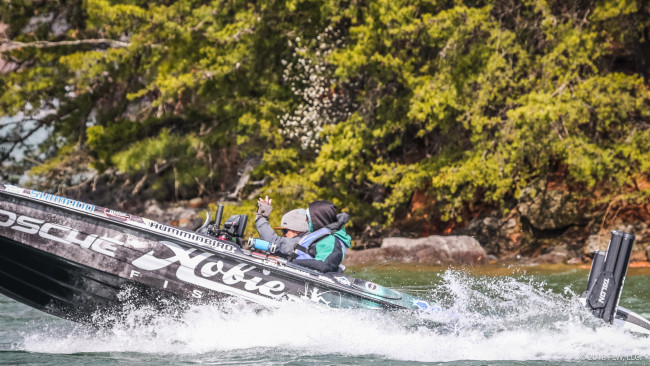 Randy Haynes has assembled a limit for “8 pounds,” which seems a little light. In fact, only 10 anglers managed to weight five fish for less than 9 pounds on day one. That said, his “8 pounds” probably is off the 19-3 mark he set on day one.

Also of note, Carl Jocumsen has about 16 pounds in the boat. With that, there’s a very good chance he’ll make the cut to fish day three.

Austin Felix did well on day one and says he’s got about 13 pounds in the boat today. While about 5-pounds of that is a lucky largemouth, he’s still set up well to add a couple pounds and make the cut. That said, he says the weather improvement has really toughened up the fishing. 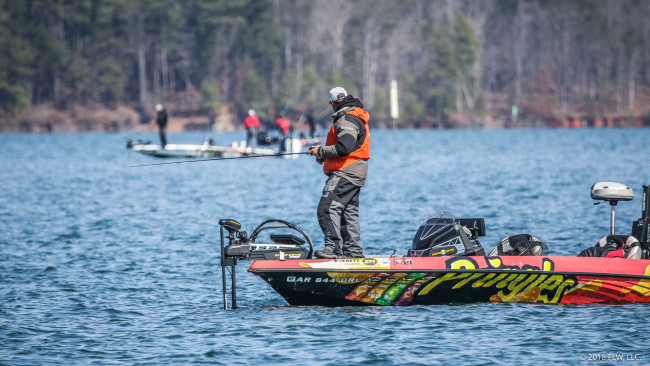 Greg Bohannan says he’s got four keepers and Russell Cecil has three. It’s been a pretty slow morning for the pair of them. 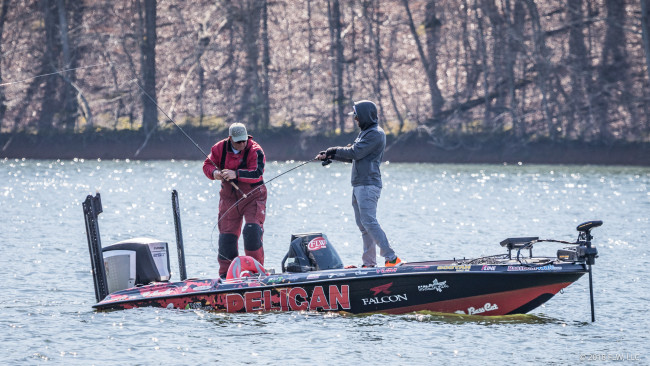 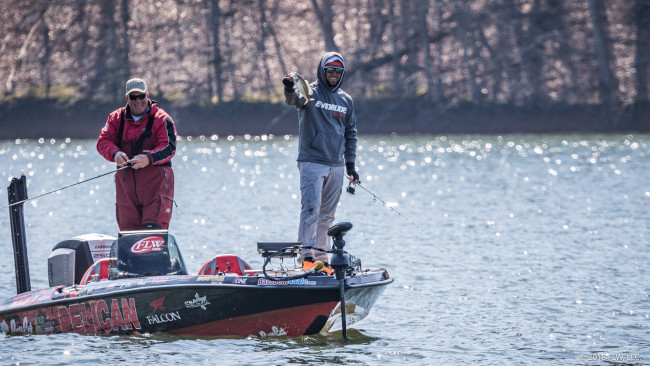 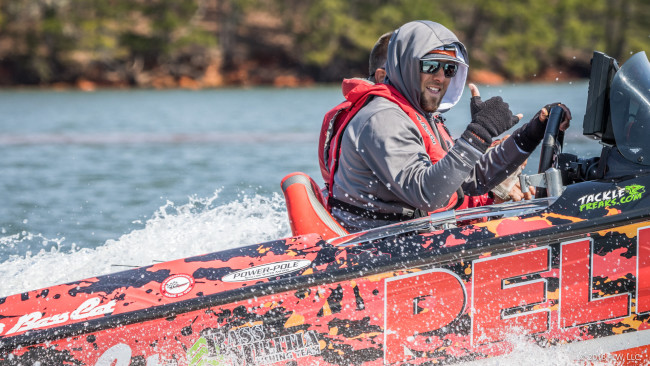 After a rough sophomore slump two years ago and a good 2017 season, it looks like Zack Birge is headed for a good 2018 as well. Slinging a little swimbait on points, he thinks he’s got more than 17 pounds in the boat, and that should put him well up in the standings considering his day one. You can lock in at least a top 30 cut for Birge right now.

Bradley Hallman is running and gunning his head off from spot to spot and school to school, but he’s still stuck on one bass. He had a miracle day one, but it seems like day two is going hard in the opposite direction for him. 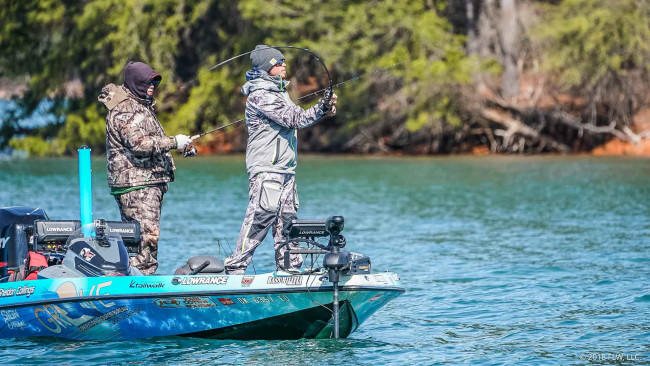 Sheldon Collings is fishing for truly roaming fish in big schools that he has to relocate each day. So far, he’s located one school, but he only got one 3-pounder to bite out of it. He pulled up a bunch more with it, but once he dropped back down they’d shut their mouths.

JT Kenney has two dinks at the moment. This derby hasn’t been good to him so far. Having a better day, James Watson has a limit and a solid 3-pounder.

10:50 The largemouths are moving

One of our reporters is down in a cove on the lower end and there are a bunch of giant largemouths swimming around it. He thinks Tim Cales will be in there in a while, but right now the fish are unpressured. It’s starting to warm up nicely, and the afternoon could definitely provide some big opportunities for folks.

Also of note is that it seems like the Chattahoochee has emptied out a lot today. Perhaps due to the success of some on day one or maybe because of the nicer weather, it seems like many have decided to hit the lower lake hard today.

Scott Martin is up to three keepers now, though none equal his big starter fish. Fishing the bank, Todd Castledine just added a nice largemouth to his creel. Cody Hahner started the day in 58th with almost 14 pounds and he might improve on that today – so far he’s got a 4-pounder and a limit to go with. 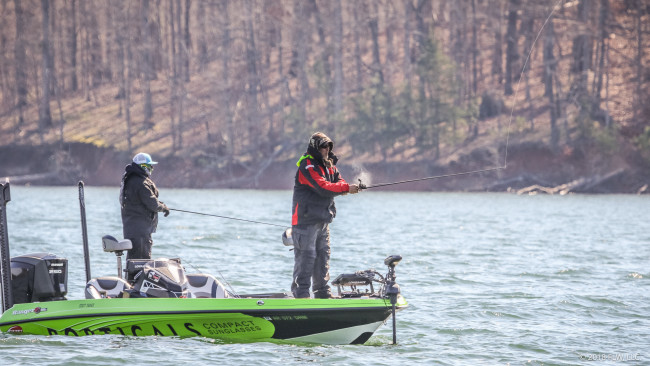 Scott Suggs got off to a great start on day one, sacking up 17-3 for 16th, but he’s sitting on a goose egg so far today.

Brad Knight has one now, but is a 4-pounder, which is definitely the right kind. Todd Castledine has one as well, but it’s just normal-sized.

Alex Davis has a couple regular keepers in the boat. He’s right on the bubble for the cut – a good day would have him fishing day three – a great day could set him up for a run at the top 10. 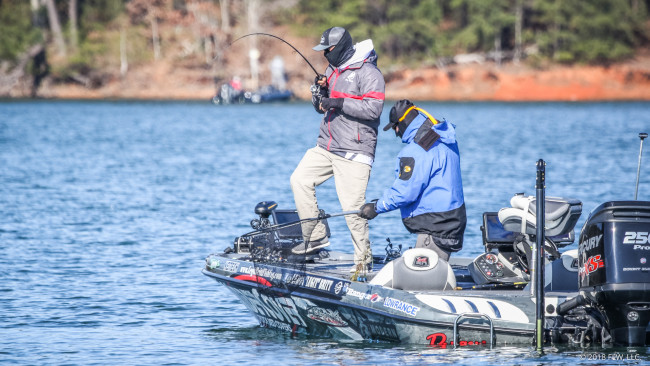 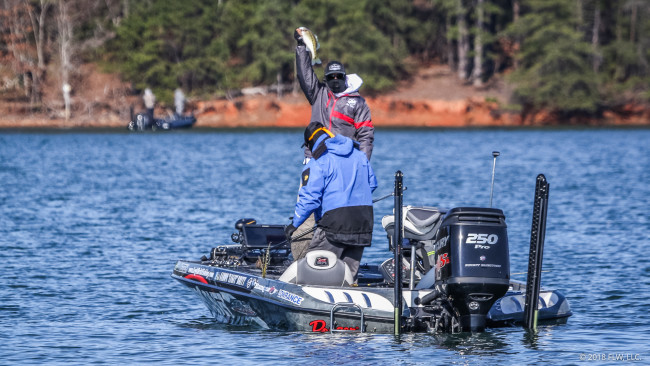 Aaron Britt just netted his third keeper and thinks his total is about 8 pounds now. Lanier is right up his alley, and he proved that on day one. Also fishing in the lower end. John Hunter has two keepers to start and one of them is a 3-pounder.

Scott Martin was one of the first boats out, but he hasn’t capitalized on that with a bunch of fish. What he does have is one golden 4-pounder. Martin says he’s fishing all new water today in an attempt to figure something else out. 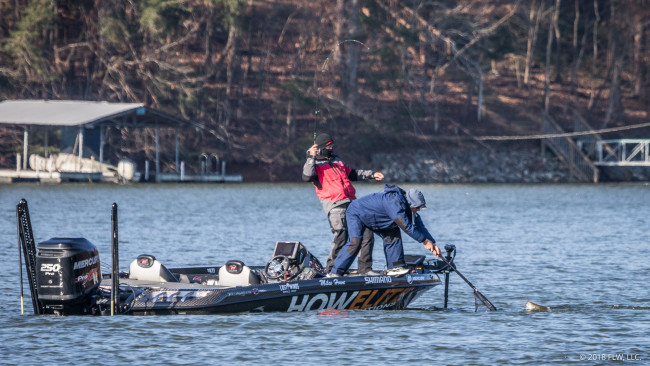 Mile Howe has two keepers in the boat and says he’s lost a few as well.

Jason Meninger is headed to a nearby ramp now. He’s going to meet a buddy with the right part and hopefully get his trolling motor back to 100 percent. We’re going to leave him be, but if all goes well he should be fishing at full-strength again shortly.

9:20 Meninger has an equipment delay

Jason Meninger just busted the mechanism that holds the pull cord in place on his trolling motor. He finally got it back up, but he’s in a bit of a delay now because it’s not something he can readily fix on the water. He’s waiting on a call back, and it seems there’s a chance he may head for the service trailers to get it worked on. In the meantime, he idled over to a point to sling a jerkbait. 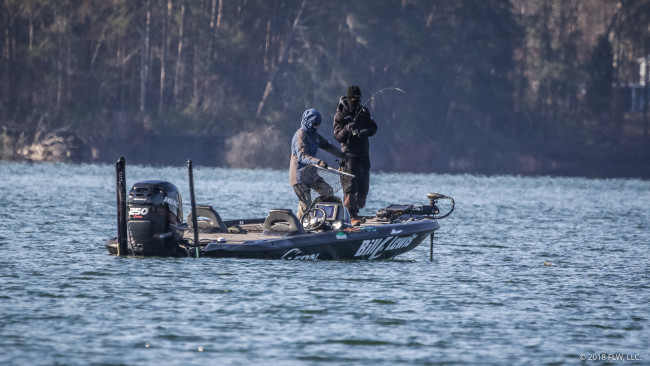 Brian Latimer has one in the boat now. Despite his Hartwell experience, Latimer had a terrible day one – here’s hoping day two is better.

Starting the day in 45th, Wes Logan is on the board with two keepers now. After finishing 32nd at Okeechobee, he finished almost dead last at the Harris Chain and then followed that up with a top 10 in the Costa FLW Series last week on Lake Seminole. A check or a cut here at Lanier would be great to keep the young pro rolling. 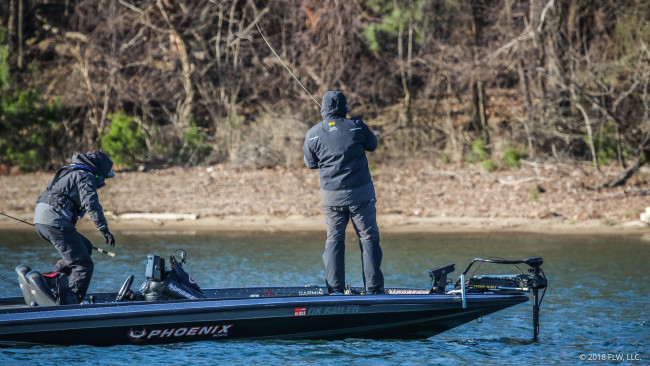 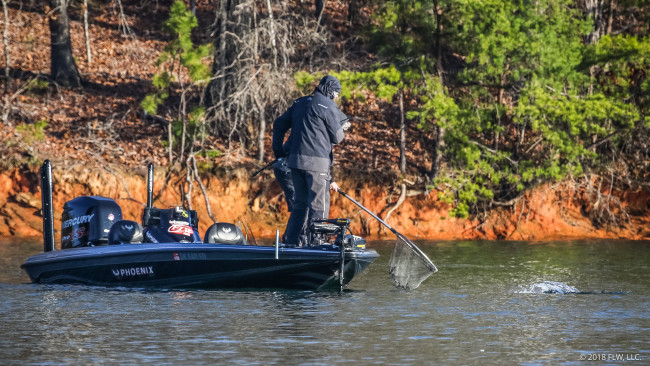 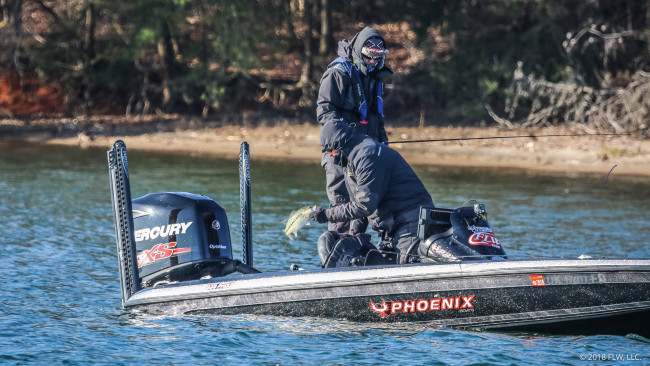 Jason Meninger just boxed up his second keeper of the morning. Bradley Hallman has run about 15 different places already and just returned to his starting spot – once there he promptly boxed up a small keeper to get his day rolling. 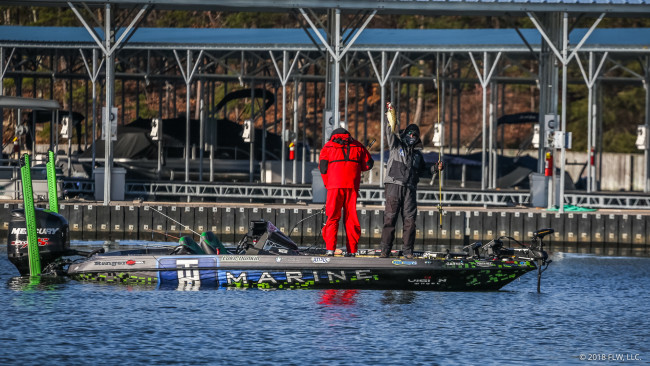 No word on how many he’s got, but Luke Dunkin just landed a giant spot not too far from Jason Meninger. 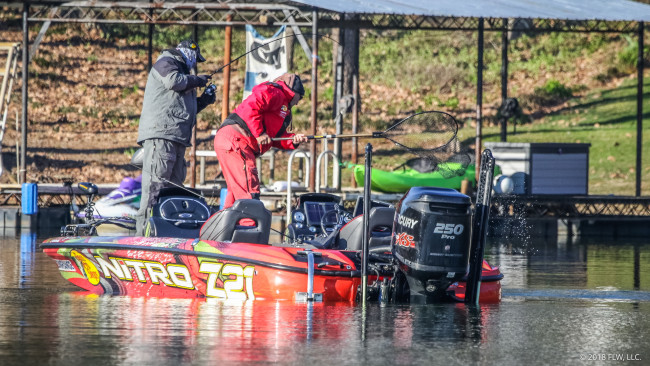 Matt Reed has one small keeper in the ‘well to start his day. Also, about 15 minutes ago Brad Knight didn’t have any in the box.

8:15 Meninger is on the board, Meyer has two

Jason Meninger just put a plump keeper spotted bass in the boat to get his day going. It’s not special, but they all count. Meanwhile, Cody Meyer has a pair of squeaker spots in the boat – he needs to step it up today if he's going to live up to his reputation as the world's greatest spotted bass angler. 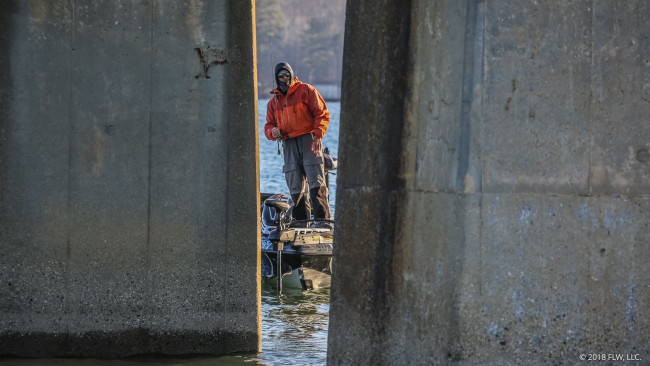 Jason Meninger started off with a non-keeper off a bridge piling down in the lower end. He says the fish on his morning schooling spot have disappeared, so we’ll see how he adjusts given some different conditions. From the sound of it, he didn’t plan on doing his damage with schooling fish today, but he also probably wanted to get on the board with a few pretty quick.

Keith Bryan didn’t do so hot on day one, but he’s off to a great start today. He’s already got three keepers and one of them is a 4-pounder. 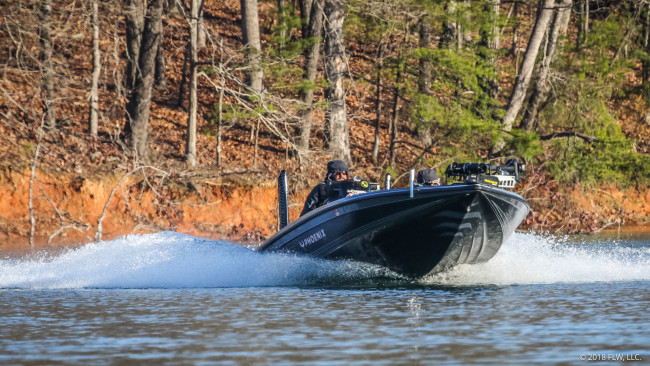 Bradley Hallman is on his fifth spot of the morning already. He’s really jumping around trying to contact his herring-eating spotted bass. Randy Haynes is another guy who moved a ton yesterday – we’ll see how that run and gun plan holds up today.

Though he doesn’t have anything in the boat yet, day-one leader Bradley Hallman started fishing a bit ago. He made the run down to the lower end and apparently got on his starting stuff with no issue. 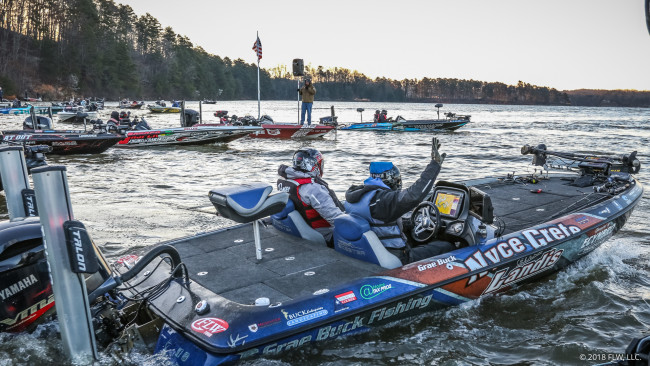 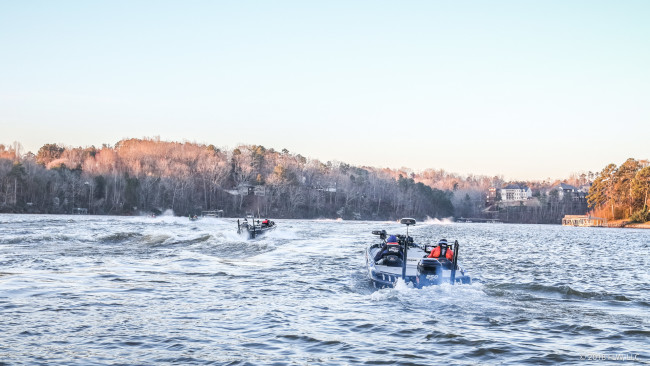 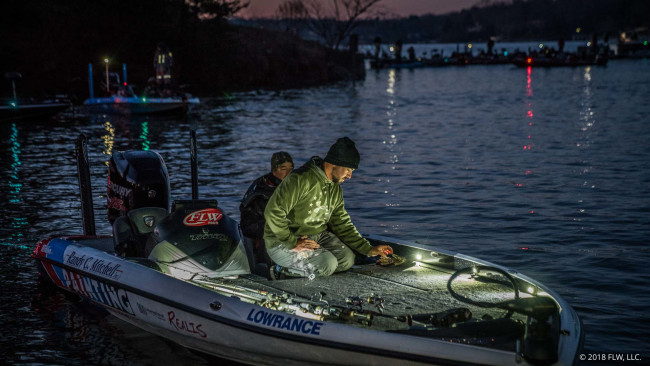 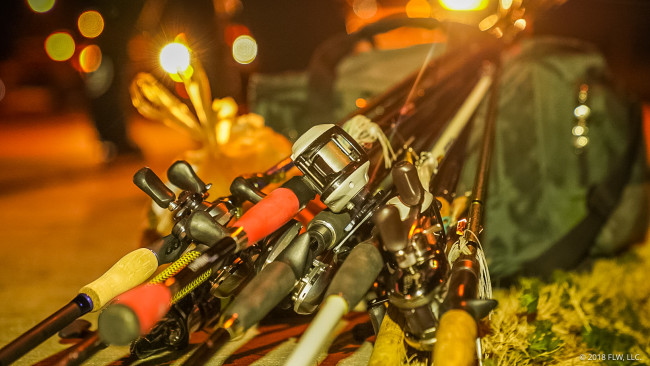 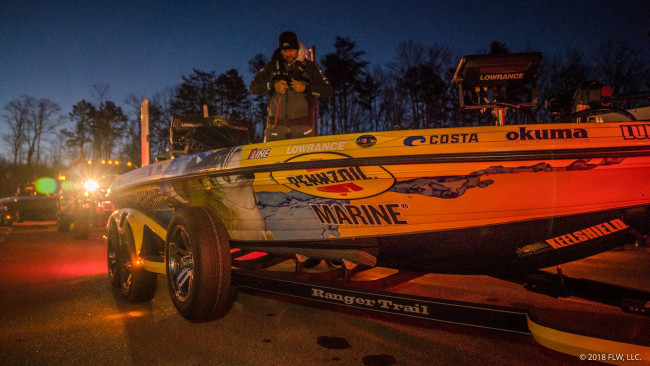 Despite chilly and blustery conditions, day one of the FLW Tour presented by Ranger on Lake Lanier was a spotted bass slugfest. A bevy of bags in the upper teens crossed the stage, and Bradley Hallman brought in five spots for a ridiculous 23 pounds,11 ounces to lead the way. Though Tim Cales, David Williams and some others caught notable largemouths, they were absolutely not the main player on the first day.

Day two should bring some more moderate weather and frankly nice conditions once things warm up. That could very well help out the largemouth bite and make some big comebacks or shifts in the standings highly possible. Of course, better, calmer weather might also change the spotted bass game –  Jason Meninger, in particular, believes that the strong offshore bite will dwindle on day two.

Though Hallman and Cales have some wiggle room to make the top 30, keeping the pace up is going to be important. The fishing was great on day one, and most guys are probably going to catch them again on day two.