The GOAT is turning things around on Cumberland 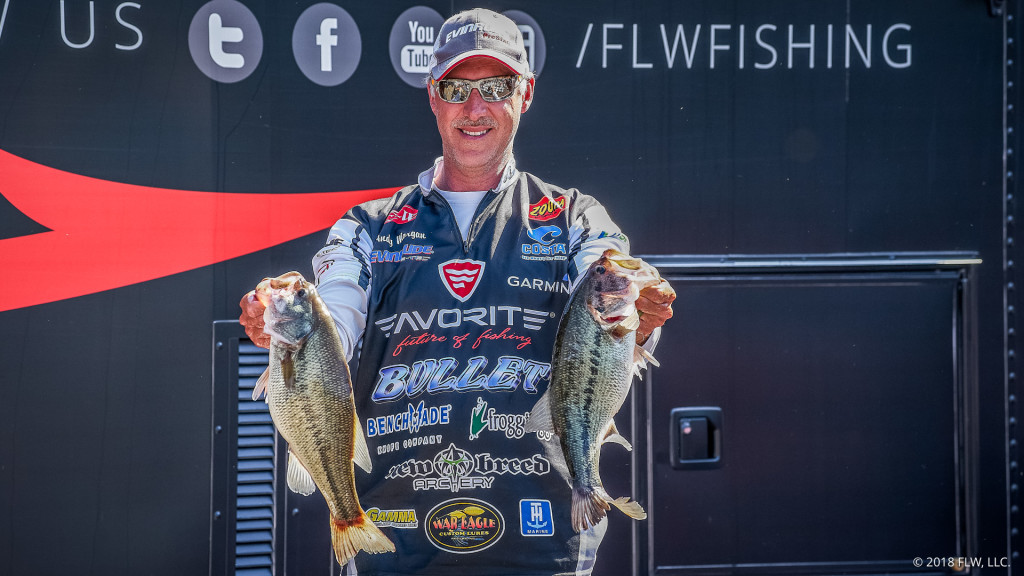 Today, Andy Morgan did what he’s previously failed to do all season long: He stuck with what he knows, fished ways that he’s comfortable fishing and hammered a tournament-leading stringer of bass that weighed 18 pounds, 15 ounces.

Morgan, who came into the tournament 109th in the standings, was the only pro to break the 18-pound mark on day one of the FLW Tour event presented by General Tire on Lake Cumberland, and he has a 1-pound, 6-ounce lead over Jason Meninger in second place.

Morgan admits that he’s tried a little too hard this season to fish the patterns that are “supposed to be” good, instead of sticking with the shallow-water, power-fishing approach that has historically landed him in check range at tournaments, and Forrest Wood Cup range at the end of the season. He wasn’t making that mistake here this week.

“I made a run, and the lake’s flooded,” he adds. “There’s a lot of stuff to throw at. The fishing’s good. It’s not like I smoked ’em, but I got quality bites.”

The smallmouth bite certainly was good today, too, with most of the top five pros keying on brown bass, which are starting to spawn on Cumberland’s lower end. Morgan and the rest of the largemouth crew mostly worked moving baits in flooded trees and bushes.

The Dayton, Tenn., pro says he needed a couple hours this morning to relocate the largemouths he’d found during practice. There are real giants in his areas, but he thinks the fish are in a bit of a funk due to the fluctuating water levels and air temperatures that have ranged from the mid-20s to mid-70s over the last few days. He anticipates big bags of fish at tomorrow’s weigh-in.

“I think they’re right on the cusp [of spawning],” Morgan adds. “The five fish I caught today were all females, and were all full of eggs.

“It’s really, really random,” he adds. “I don’t know what the next one is going to be beside or when the next bite is going to come. But it’s my kind of fishing. It ain’t no dragging around.” 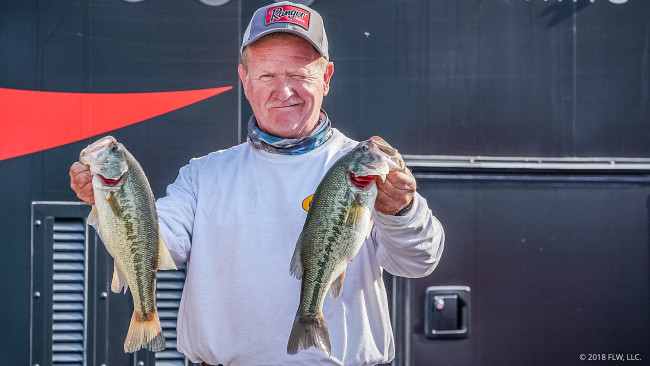 Lake Cumberland has long been a popular destination lake for many Ohioans who make the short drive down to hang out on the reservoir’s many houseboats. Richard Littlepage frequents the lake for a much better reason: the great fishing. The Cincinnati co-angler, who fished with pro Cody Kelley today, says his frequent trips to the lake had him well prepared for what to expect in this derby, and he made the most of the six keeper bites he got to weigh in 13 pounds and take the day-one co-angler lead.

“It started off pretty early,” Littlepage says. “We were boat 176, and we made a long run, and it was rough. But he [Kelley] was on the right stuff. He knew where to go. It was great.”

Littlepage caught his fish with a jerkbait, a jig and a spinnerbait. He caught one keeper spotted bass, but culled it out late in the day to weigh in a full stringer of largemouths.