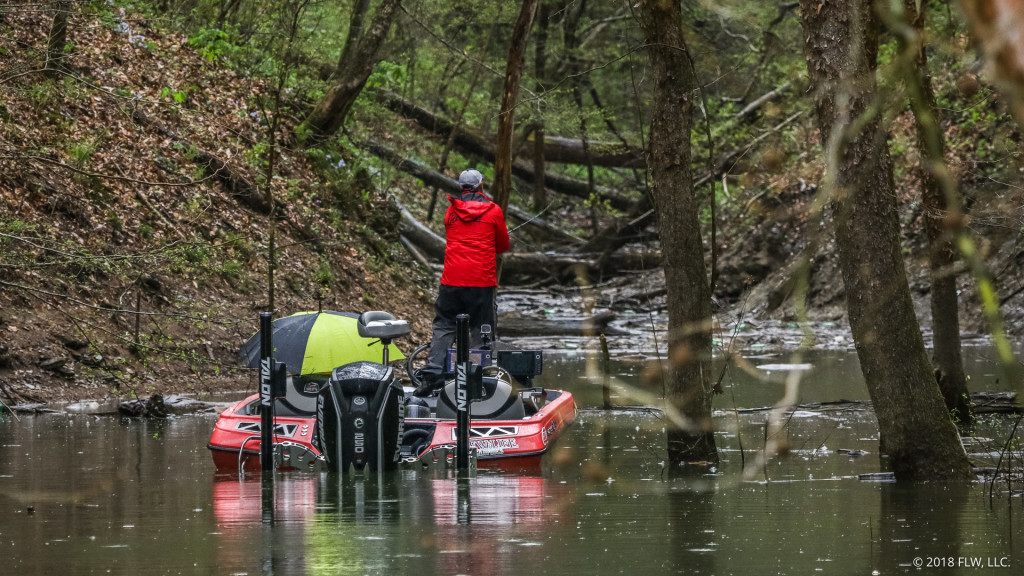 If you want to catch largemouths on lake Cumberland right now, about all you need is a spinnerbait and the ability to accurately cast it around shallow wood cover. The smallmouth fishing is just as good, especially if you’re skilled with a swimbait.

Those two patterns continue to dominate the Lake Cumberland FLW Tour event, which is presented by General Tire. Both have the potential to produce the win on Sunday.

Bryan Thrift currently holds a narrow 7-ounce lead in this derby. He’s in the smallmouth camp.

Here’s how the rest of the top five made it to Sunday and gave themselves a chance at the win. 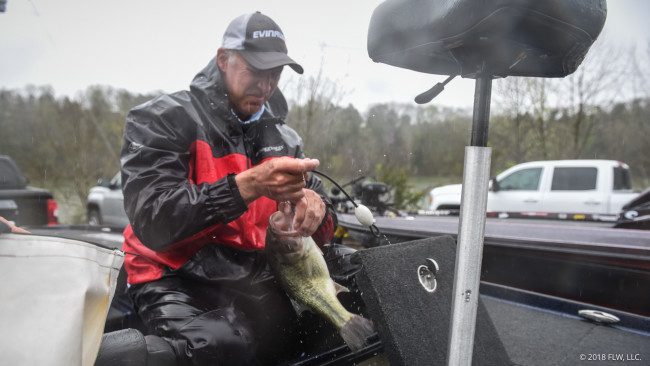 Andy Morgan has ridden one pattern all week long and has no intentions of changing it up on Sunday. He’s fishing a spinnerbait through flooded trees in a major tributary on the lower end of Lake Cumberland. Though Morgan has caught some decent spotted bass and smallmouths, he’s really banking on the largemouth bite. Today, he weighed in 16 pounds, 6 ounces.

“I caught four this morning just going down the bank with a spinnerbait. Two were pretty good ones,” he says.

Yesterday, Morgan suffered several lost fish that might wind up haunting him if he can’t keep up with Thrift tomorrow. Today, he only lost one quality bite. He says the problem is the fish are eating the blades on his spinnerbait, which he can tell because he hooked several in the chin.

Overall, he says today was a better day, though his afternoon bite, which has been strong all week, wasn’t as good today.

“It kind of died off,” he says. “When it got bad is when it got calm [after the heaviest rain]. There was still a little light rain falling, but without the wind I don’t really know what happened.”

The only variation in Morgan’s strategy has been to flip a jig to some of the thicker cover he encounters. He caught one keeper doing that yesterday, and two today. But he’s not sure that’s the best approach. Slowing down to flip just cuts down on the amount of time he can keep the spinnerbait wet, and the spinnerbait has been his big-fish lure.

“I’m going to go back and do the same thing tomorrow. I don’t know anything else to do. It’s worked so well.” 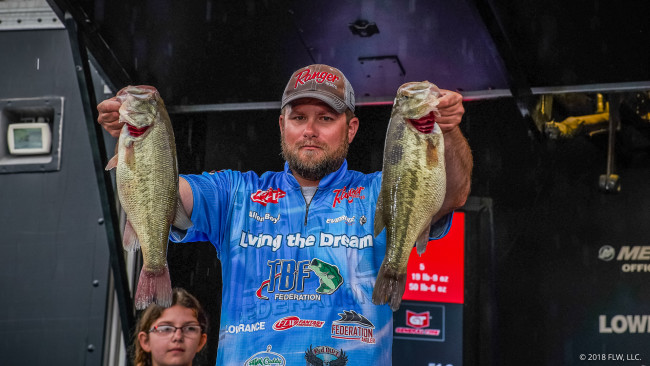 Watch out for Allen Boyd tomorrow. The Indiana pro and The Bass Federation national champion weighed in 19 pounds, 9 ounces today, but he left several good ones out there that rolled on his spinnerbait. He’s dedicated to the largemouth bite and landed about 40 keepers today. He even shook off a number of small fish just to save time.

“Things have changed each day of the event, including the three days of practice,” Boyd says. “I think it’s only going to get better. They’re up there to do their thing. I saw something today that makes me really happy. It’s all about keeping my composure. It’s a mental game now.

“I mainly fished two pockets. I say pockets, but they’re big,” he adds.

Boyd’s strategy for tomorrow is to continue to cover a lot of water. He had planned to never fish the same spot twice, but he’s going to revisit some spots again tomorrow to try and pick up what he missed today. 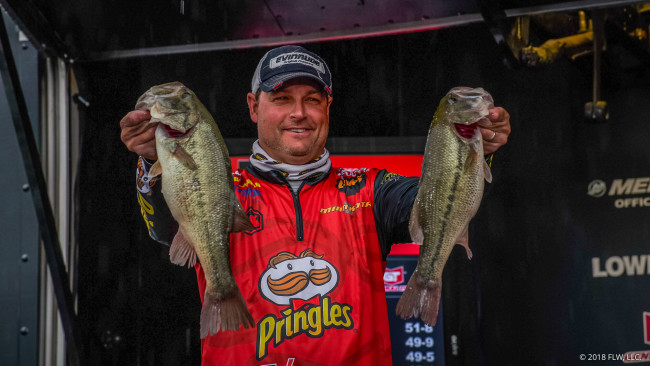 We’re not in the Ozarks, but don’t tell that to Greg Bohannan. All week long he’s approached Lake Cumberland the exact same way he’d approach many of the Ozark reservoirs that he frequents back home this time of year.

He weighed in five largemouths today, though he did test the smallmouth bite just to make sure he wasn’t missing an opportunity.

“I thought this weather would make the smallmouths bite good, so I smallmouth fished for about an hour and caught one little spotted bass. Then I switched to largemouths, and it was really good. I caught most of my fish by 10:45. I culled up a couple times and left my best area around noon.”

Bohannan spent the rest of the day trying to apply his pattern in other areas but wasn’t able to add any waypoints that he thinks are really right.

“It seems like on this lake some areas have them really good, and some don’t, but I’m trying not to go over the same spot twice,” he says.

As for tomorrow’s weather forecast, which is calling for lower temperatures and more rain, Bohannan isn’t worried.

“I think these fish are kind of like Ozark bass: If it’s overcast and there’s a little wind, this time of year they don’t pay much attention to the temperature.” 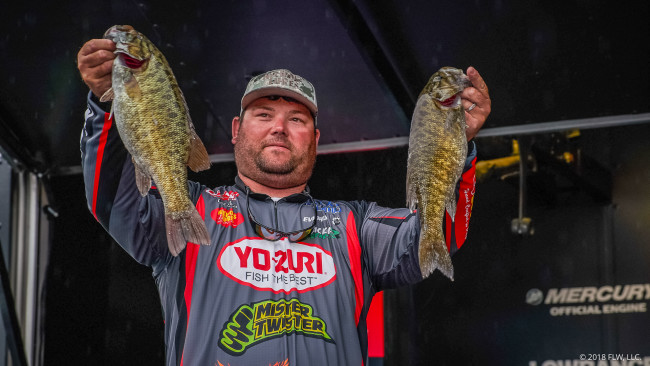 The first two mornings of the tournament provided fast-and-furious action for Clent Davis, who has weighed in 15 smallmouths this week. Today, he suffered a much slower start.

“I’ve caught ’em all,” he says. “At 1 o’clock I decided I had to do something different. I ran down to some stuff I fished a few weeks ago in pre-practice.”

The move worked, and Davis was able to build up to a solid limit of 16-6 to stay easily within striking distance of Thrift.

Davis is fishing a hollow swimbait on points and just inside of pockets in creeks on the lower end. He plans to do more of the same tomorrow, but has given up on his best creek. He’s going to take the risk of running all new water in search of just the right kind of spots. Davis didn’t share the exact details, but he knows what he’s looking for.

“They’re spots where they’re about to go right there and spawn. That’s all I know,” he says.