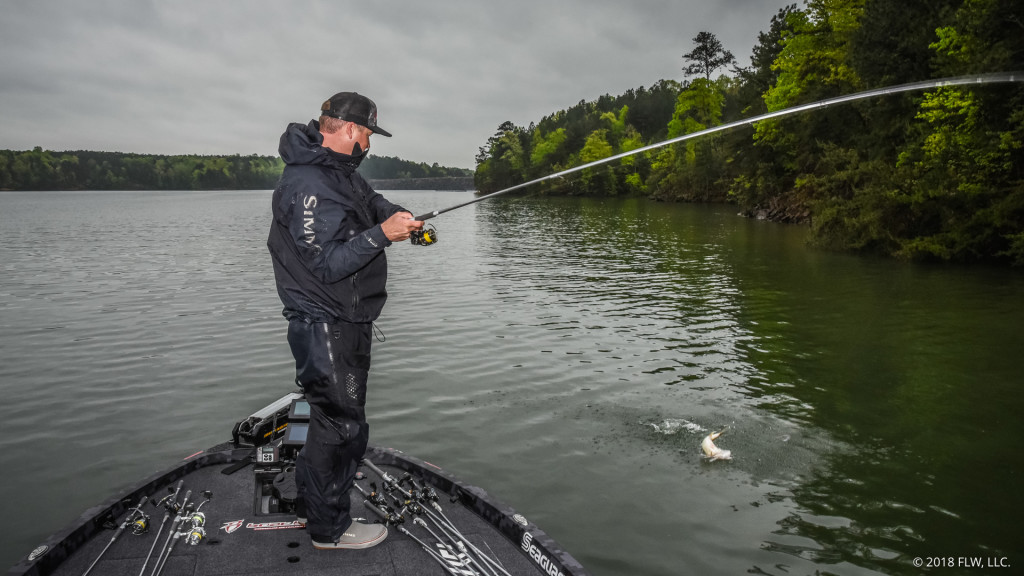 Hop into a bass boat with professional angler Cody Meyer of Auburn, Calif., and it doesn’t take long for the discussion to turn to spotted bass. This is especially true on day one of practice for the FLW Tour presented by T-H Marine at Smith Lake in Alabama, where spotted bass are prolific. In fact, in an ironic twist, even though Meyer grew up in California, Smith Lake may actually be the genesis for his entire bass fishing career.

From the minute Meyer fires up his graphs, he begins talking about the prospects of finding big spotted bass to win the tournament – and for good reason. Out of the four previous FLW Tour events on Smith, California natives have won two: Michael Bennett and Brent Ehrler. And it seems that every time the FLW Tour visits a spotted bass lake in Alabama, Georgia or the Carolinas, pros from the West Coast really shine.

Which explains why I’m in the boat with Cody Meyer today: to have a detailed discussion about the spotted bass species while being surrounded by their scenic homestead. 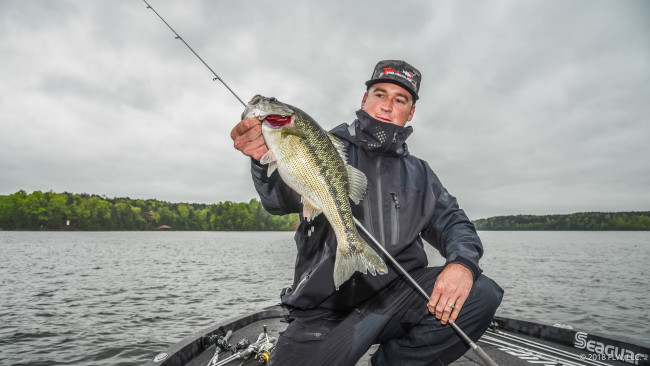 Not all spotted bass are created equal

Meyer is a self-admitted spotted bass freak who forged his tournament-fishing education on spots. In addition, Meyer was also a potential spotted bass world record holder for a brief period of time with a 10.80-pound brute caught in California.

“A lot of people think that a spotted bass is a spotted bass,” Meyer says as he takes his first few casts on Smith. “But that’s not really the case. There are actually different types of spotted bass and they’re a little bit different in the way they act and the way they set up on cover. So knowing which one you’re dealing with makes a big difference in how you fish for them.”

The subject of spotted bass in the scientific community often brings up a spirited conversation about different species and subspecies spread across the U.S. Trying to determine which is a true Kentucky (or northern) spotted bass versus an Alabama spotted bass can be like opening a can of worms, especially considering all the possible “inadvertent” transplanting of one species from one fishery to another and the probability of crossbreeding.

Although there are different subspecies of spotted bass, Meyer breaks them down into three basic kinds of spots when he’s tournament fishing across the country, mostly based on their habits.

He starts with his favorite: the Alabama spotted bass.

“As I understand it, the Alabama Spotted bass that I grew up fishing for in California actually came from this lake right here, Smith Lake,” Meyer says. “Many years ago they took these pure strain Alabamas and stocked them out there in lakes like Oroville and Shasta where I learned how to fish. If it hadn’t been for these Alabama spots in this lake, I don’t know that I would be fishing for a living.

“In the beginning of my career out West, I won a lot of money on these Alabama spotted bass. One of my first top-10’s in a regular season FLW Tour event in the East was on this lake. So in some sort of strange way I owe my career to this lake.”

Meyer likes the Alabama spots the best because they get bigger and are fairly widespread across popular tournament lakes in the southeast such as Smith, Lanier, Norman and Hartwell. Most of all, he likes them better because they tend to relate to cover and structure better than true Kentucky spotted bass.

“Alabamas are far more predictable and easier to catch,” he says. “They like getting on brush piles, hanging around docks and suspending in timber. If you find them one day, they’re usually nearby again tomorrow.”

“Then you have the Coosa spot,” he continues, “Which to me is nothing more than an Alabama spot that lives shallower and likes current. Those things are the studs of spotted bass, but they only live in that one section of Alabama in the Coosa River and the impoundments connected to it.”

“I call the Kentucky spotted bass the devil fish,” Meyer laughs. “Because those things are the dang devil to catch. Pure Kentuckies live in Ozark lakes like Beaver and Table Rock or lakes in the Appalachians like Cumberland where we just fished.

“I remember the first year I went to Beaver Lake, Michael Bennett, who is a spotted bass wizard, told me not to think about those spotted bass as the spots that we are used to fishing for in California. And he was right. Those fish (Kentucky spotted bass) are way different than these Alabamas here. True Kentuckies are here today and gone tomorrow – they’ll leave you high and dry. 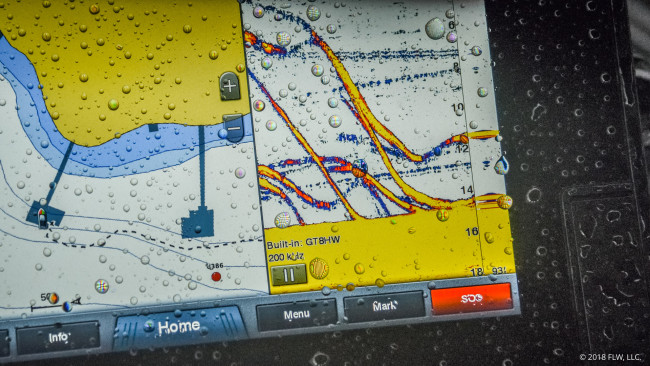 Meyer says the Alabama spotted bass is the original “video game” fish that all of the California contingent grew up fishing for with modern-day big-screen electronics.

“That’s why we all love that kind of fishing,” he says. “Bass that suspend over 30, 40 or even 50 feet is a normal thing for us. We love dropping to them on our screens. Kentucky spots don’t play the video game near as well.”

This also explains why West Coasters are so much more comfortable on true “vertical” lakes like Smith, which features a lot more steep, bluffy banks and vertical cover such as floating docks (with rails and cables), timber and bridge pilings that protrude down into ultra-deep water.

“Alabamas are suspenders,” he explains. “They like something that’s vertical, or nearly vertical, in the water column. They would rather just move up and down vertically on dock rails or cables or timber or over brush than they would travel long distances over gently sloping bottom.

“Another thing that’s so cool about Alabama spotted bass is they will spawn right on that vertical stuff. I can’t tell you the number times I’ve seen them spawn on bridge pilings, rails, cables and even on the props of big houseboat motors. They don’t have to seek out flat bottom to spawn. Females will deposit their eggs on vertical stuff no problem.” 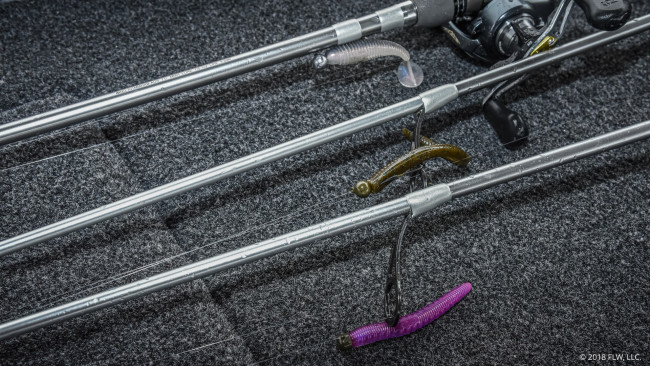 Spotted bass guru Aaron Martens once made the claim that spotted bass are “smarter” than largemouths.

It’s a bit of a brainteaser statement since many anglers across the country could probably point out some very smart largemouths.

Meyer, however, agrees with Martens and totally relates to what he means by their craftiness.

“They are smarter in a way,” Meyer says. “They’re more technical I guess you could say. They’re super savvy and wary of their environment. They’ll stay put, but can be hard to fool.”

When it comes to being “smart” Meyer brings up an interesting point about spotted bass.

“It’s like they pass on lure avoidance through their genetics,” he surmises. “I mean, every year you can go to Florida and catch bass on a junebug-colored stick worm or go to Texas and catch bass on lipless crankbaits. But I can’t tell you the number of lures that used to be so awesome on spotted bass and now they won’t touch them.”

With that, Meyer begins listing the litany of lures he no longer uses for spotted bass.

“Doodling used to the deal,” he begins. “Who does that anymore? Then the darter head was a crazy spot catcher for a number of years. I keep trying it, hoping it will come back around and I can’t get a bite on it.”

“What about a split-shot rig?” he questions after a few more casts. “Remember when you could catch every spot around your boat with a split-shot centipede? They learned that one too. Just a few years ago the underspin was the absolute deal for spots, especially at Lanier – how many were caught on it at Lanier this year?”

“Heck even the drop-shot has fallen out of favor with spots,” he adds. “I don’t use that thing near as much as I used to.”

Meyer says the only thing that’s stood the test of time is a shaky head, which still catches its fair share of spotted bass.  And even then he has found the recent rise of the Ned rig to be pushing the shaky head out of the way in terms of spot preference.

“I know all species of bass get pressured and begin to shy away from certain lures, but spotted bass seem to be a little better at that game.” he says. “Just the smallest change in little things like dropping from 8-pound test line to 6-pound test, or changing colors just a little bit, or going to a smaller hook can make a huge difference in the number of fish you put in the boat. They’re wary little suckers – their eyesight is so good and they’re so sensitive to vibration in the water. They learn pretty darn quick when something is fake.”

When asked about the potency of the new generation of finesse swimbaits like the Keitech Swing Impact FAT or the Strike King Rage Swimmer, Meyer fully admits that the small ribbed swimmers are the hottest new mousetrap for spotted bass.

“That’s a perfect example of what I’m talking about,” he says. “It’s like they caught onto the underspin game and now they only want plain Rage Swimmers on a little jighead with no blade at all. You can throw an underspin out there 10 times without a bite, pick up a little Rage Swimmer and they bite it on the first cast – it’s just crazy how picky they are.”

But there is something about the spotted bass’ inherent fickleness that really intrigues Meyer.

“Once you dial in their deal, man, there is nothing else in fishing as satisfying as fooling a 3- to 5-pound magnum spot. If you can just find the right combinations of little tricks to fool one big one, you can mop up pretty quick. Just thinking about that gets me fired up.” 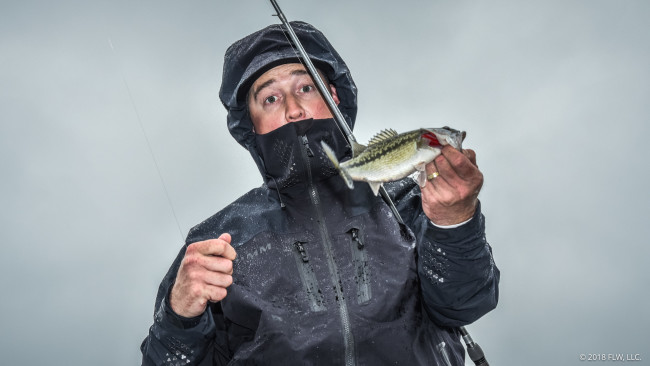 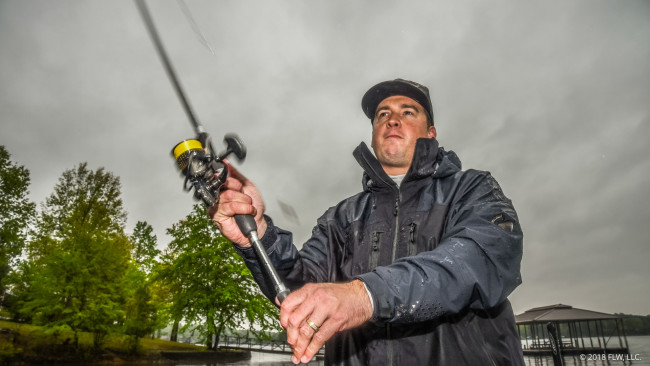 As Meyer hops around Smith Lake the first morning of practice, he has caught a few fish but is not too impressed with the dark, drizzly conditions. He’d prefer to see sunshine to help his Alabama spotted bass cause.

“Sun helps with several things here,” he says. “Obviously it warms the water, but I think it also helps bring the blueback herring up higher in the water. Plus, sunshine is big anytime you’re dealing with docks – it creates shade and puts them in predictable places.

“It's supposed to rain like this during practice and then get sunny during the tournament, which is just fine with me,” he adds. “I’m probably going to spend the rest of the day running up several of these different main creek arms to see the current conditions, see if any of them are warmer than the others. The one thing I’d really like to hone in on is just how far along we are in the spawn. I’m seeing 60-degree water temperatures now, so I don’t know. Sometimes in lakes like this with so many different branches, they’ll be farther ahead in one arm than the other. From there I’ll decide what I’m going to do during the tournament.”

No matter how the rest of practice goes for Meyer, you can bet that come weigh-in time, he’ll have a nice sack of those pretty Alabama spotted bass that he loves so much.