Haynes Leads Off with 26+

It’s a battle of the ledge masters on Kentucky Lake 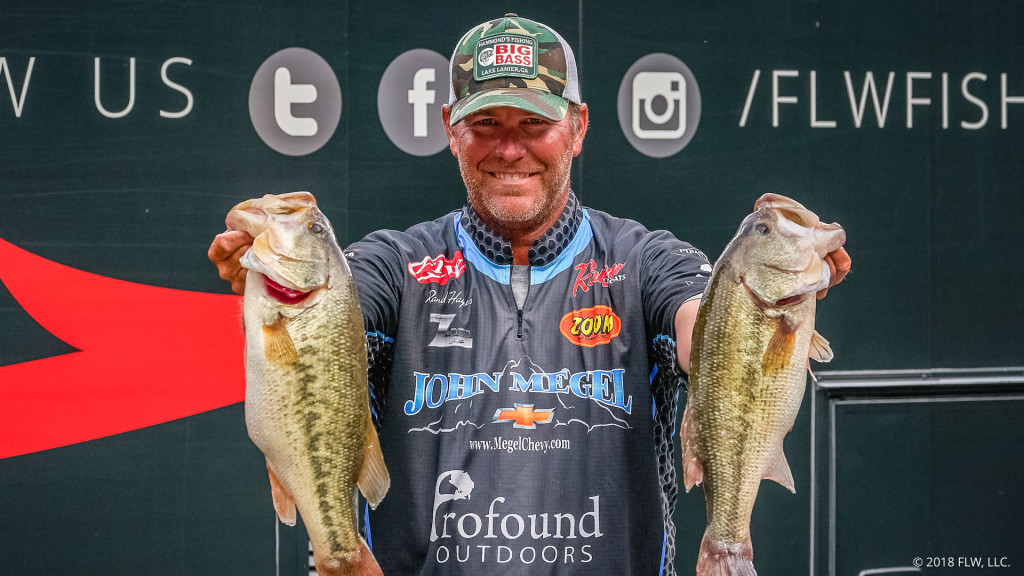 Normally, when Randy Haynes catches them big on the Tennessee River, then reports a tough day and a lack of confidence that he can repeat a big limit for a second day, he’s sandbagging like crazy. This time around on Kentucky Lake, in the FLW Tour event presented by Costa, the Ripley, Miss., pro’s “tough day” statements might be more accurate … but he’s probably still sandbagging a little.

Haynes pounded out 26 pounds, 3 ounces to take the day-one lead, but instead of walloping fish all day long and targeting dozens of schools, he got it done from one key area, and he had to really lean hard on them to get there.

“I kind of burned the hole down today, so I might have nothing tomorrow,” Haynes says. “I was very fortunate to have what I had. I grinded it out. The bites I had were just the right ones.”

His uncertainty stems from the fact that the fish just haven’t made it out in big numbers to Haynes’ favorite ledges. He checked spots deep and shallow, and areas traditionally good early in the season and late. They’re essentially behind schedule. If they continue to show up over the next few days, however, watch out, because he’s one of the best at the offshore game.

Haynes struck out on his first five or so spots this morning. He ended up catching a couple of keepers on his key area mid-morning. For the next couple hours, he bounced around and checked a number of spots without much luck. A return trip in the afternoon produced most of his weight. All totaled, he says he landed only six keepers.

“There were 10 fish on that spot. I caught six of them. My co-angler caught a couple. It’s burned to the ground now.”

The good thing for Haynes is he’s not encountering a lot of fishing pressure from the rest of the field. He says the area is “wide open,” meaning he can check just about anything he wants without having to dodge other boats. That’s the way he likes it.

A fierce competitor, Haynes says he didn’t consider saving anything on the spot. He was all in. He also added that his favorite way to catch them is to find one of those magic moments when he can locate an active school, trigger the fish to bite and load the boat in just a few minutes. Those are the moments that lead to big wins, and he found it a little this afternoon.

“I like to win every day,” he says. “I don’t like to get second. I found one school today, and I’m in the lead. That’s what I’m looking for.”

Haynes’ caught his fish on a Z Boss 22 crankbait – a deep-diver that reaches the 15- to 18-foot range. A worm might’ve gotten him a couple more bites, but that’s not his style.

There are plenty of carp sharing the ledges with the bass on Kentucky Lake, but Haynes says he knows how to tell the difference, and when he checked this particular school today, they were lined up just the way they’re supposed to be. Tomorrow, he’ll be looking for a similar scenario, and he’ll need to find it if he wants to hold off second-place pro Jason Lambert, who weighed in 24 pounds, 6 ounces, as well as 13 other pros who caught at least 17 pounds.

“As many places as I’ve got, I can’t look at it all in a week’s time,” Haynes adds. “These [fish] were tight [to the bottom]. That’s why I stopped there.” 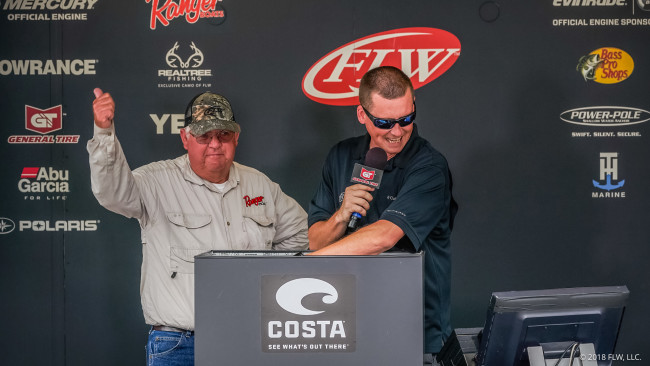 Webb out in front on co-angler side

Five bites are what it takes to make money on the co-angler side of any FLW Tour event. Dyersburg, Tenn., co-angler Ronnie Webb did one better, getting six bites and landing five keepers to take the day-one lead on Kentucky Lake.

Webb weighed in a limit worth 17 pounds, 7 ounces. He leads California’s Keith Gunsauls by 2 pounds, 5 ounces.

Pro Chad Morgenthaler, Webb’s partner today, was a key component to the co-angler’s performance. He lined up the boat so both parties could cast to schools of offshore fish.

“We’d go from spot to spot. He’d line up sideways, and we’d both cast in there,” Webb says. “He’d catch one; I’d catch one. There was no certain spot. It was just a good day.”

Webb is aiming for his first FLW Tour top 10 and, with any luck tomorrow, his first-ever win with FLW.