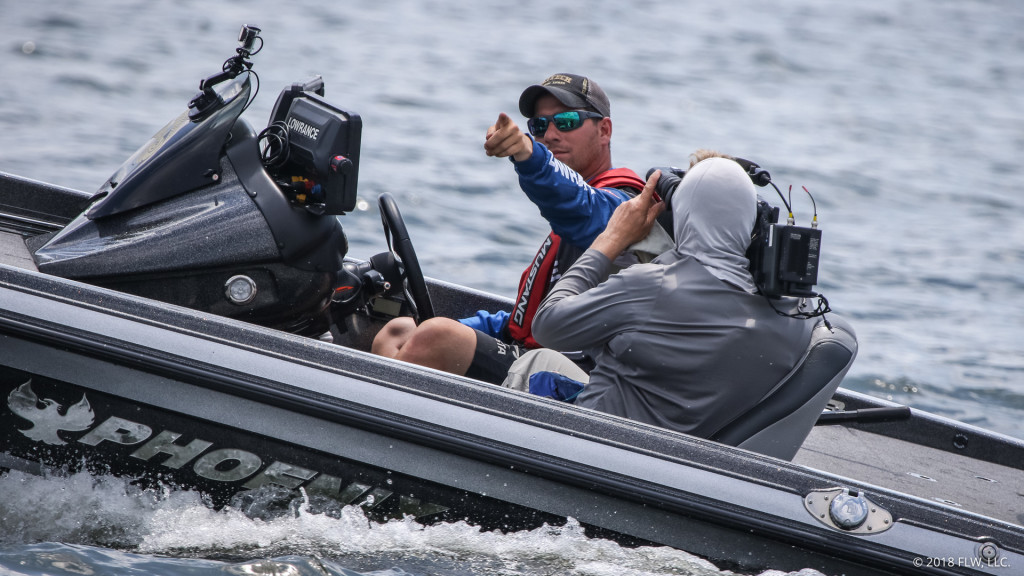 We’re wrapping up the blog for the day and heading back to check-in, which is at 3:30 p.m. CT. Weigh-in starts at 4 p.m. CT and it should be good, and we’ll also get to see how much that big one that Lambert caught will actually weigh.

Brandon Cobb just popped two little ones for his fourth and fifth keepers (we had it wrong before), and now he’s got a limit. Unfortunately, his last two keepers aren’t nearly the quality he started off with.

Jeff Gustafson popped a 5-pounder to cull up to around 18 pounds. He’s probably going to be on FLW Live tomorrow.

Jim Dillard has four in the boat now – he’s got a 5-pounder and a 3-pounder and a couple of keepers. Jordan Osborne got off to a good start, but has scuffled otherwise – with a recent cull he just got up to about 14 pounds.

It was only a matter of time before Mark Rose really got in on the ledge game. He just culled again with a 3-pounder to get to 19+ easily.

Brandon Mosley finally landed a good one – he’s got three small keepers and a 4-pounder now. David Dudley just caught his second fish of the day – a nice 3-pounder.

Mark Rose culled out a 2-pounder with a 4-pounder and probably has close to 20 pounds now. The race for second is going to be hot tomorrow. 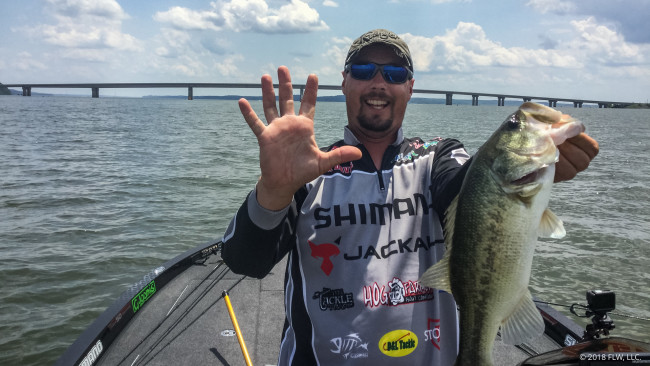 Alex Davis wrapped a limit with a solid 2+ and is sitting unofficially in ninth. He may have one more day of fishing ahead of him. Tyler Stewart has four now, but none of his recent fish are too special.

Michael Neal put another 4-pounder in the boat – he’s into the high teens easily now.

Also, David Dudley caught a 3-pounder a bit ago. He’s got two on the day.

John Cox just caught a 5-pounder. He’s got over 17 pounds now and he’s done it all up shallow.

Josh Douglas just drop-shotted up another keeper to get up into the teens. He’s really put it into gear of late and is probably going to be going out in second place tomorrow. He won’t really have a shot to win, but it will be the first top 10 cut of his career with FLW.

Swapping back to the drop-shot, Josh Douglas landed his third and fourth keepers and they’re both really good ones. We’ve got him in double digits with just four keepers and back in the top five. 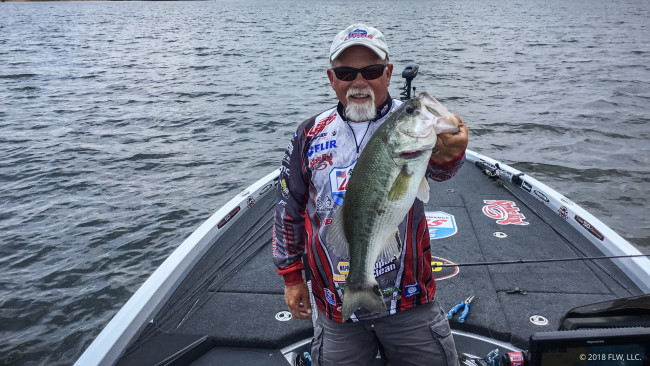 Bill McDonald just finished his limit with a 4-pounder. He’s had a really good day and has about 15 pounds or better today. 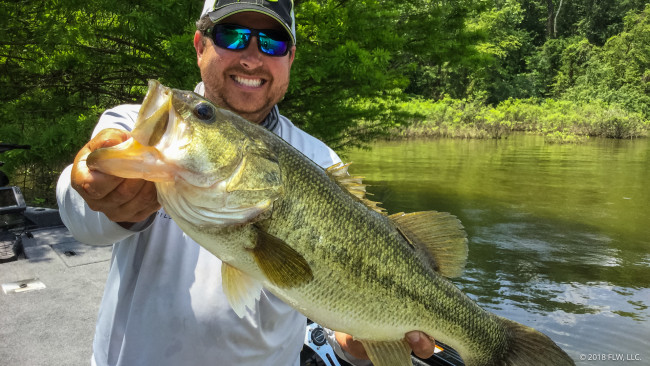 Fishing up shallow, John Cox just popped a 4+ to get up to about 15 pounds. He may be fishing shallow on FLW Live tomorrow.

Clark Wendlandt just filled a small limit out cranking a squarebill on docks over in Barkley. That’s a cool way to do it, and he’s getting some good money and points, but he’ll need to improve a lot if he wants to make the cut.

Josh Douglas just lost a key 3-pounder on a crankbait. He’s cranking a shallow bar now, and with only two in the boat every fish counts if he wants to hang in the top 10.

Tyler Stewart just caught a 5-pounder. It’s his second of the day, so he’s got some work to do, but it’s a good fish to have. Meanwhile, John Hunter has culled for the first time today -he’s got a limit worth about 11 pounds. 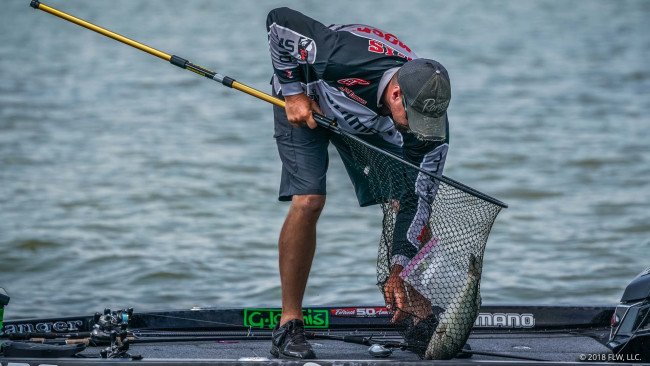 11:45 Davis gets his fourth, Neal limits

Alex Davis just caught a good 2+ for his fourth keeper and Michael Neal limited out with a decent one.

Also, Mark Rose just culled up with one a little shy of 3 pounds. 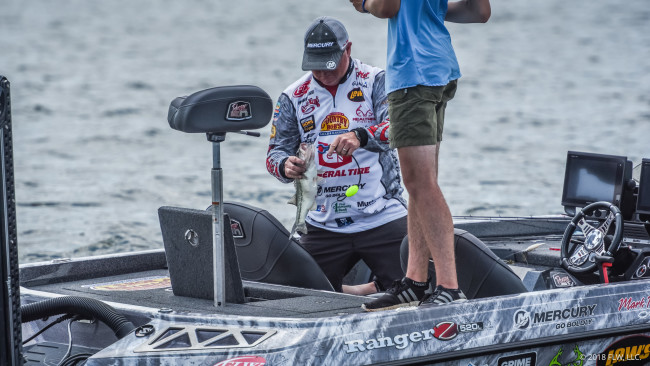 Josh Douglas just caught a nice drum (he’d probably call it a sheepshead) on Live. Other than that, it’s been slim pickings. One guy catching fish now is Dylan Hays – he’s culled a couple times recently and has about 14 pounds. Depending on how the day shakes out he may have a shot at a top 10. 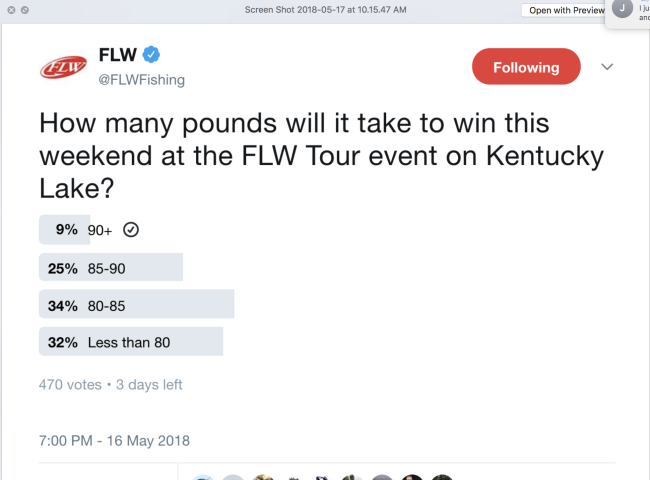 Jason Lambert hasn’t tried to catch anything in a while, and he’s not going to, but that’s not the point. Now, he’s got over 70 pounds unofficially (with more than a 20-pound lead) and is on track to break 90 pounds with ease. We put a poll out on Twitter before the tournament started, and at about 10:15 a.m. on day one the majority of respondents believed that 90 pounds was unattainable. We’ll see…

Austin Felix just caught his second keeper. He’s been grinding this morning and hasn’t been coming up with much.

Cody Meyer boxed up his third a minute ago as well, he’s got about 10 pounds so far, so they’re all pretty solid.

Alex Davis caught a good one for his third keeper. He’s got around 10 pounds now for just three and looks to be continuing his comeback today, albeit a little more slow and steady than Rose.

Austin Felix and Josh Douglas are both doing pretty poorly today. Felix has one in the ‘well and has caught one short since then. Douglas has two.

Mark Rose is fishing offshore and seems to be working on a pretty good day – he’s culled once now and had about 17 or 18 pounds in the boat. 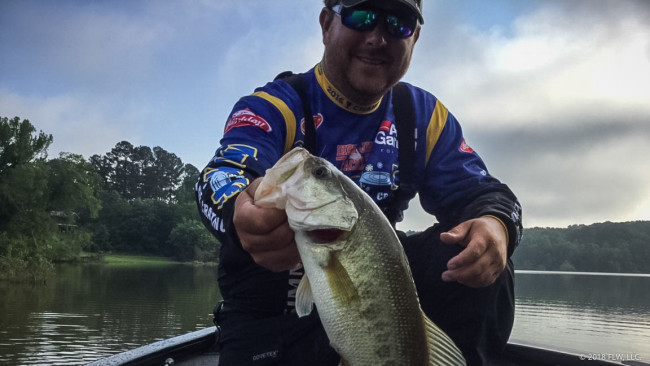 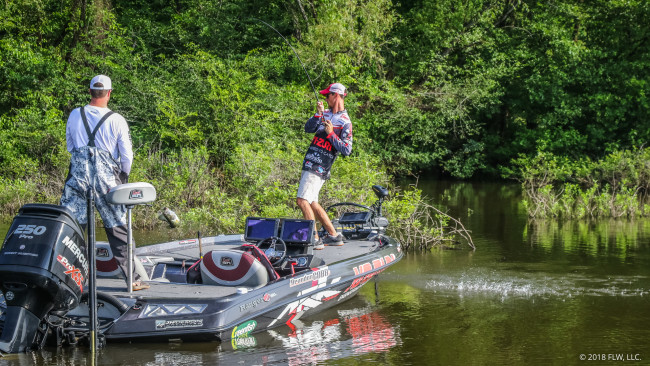 10:12 The shallow gang is working hard

The shallow guys don’t stand a chance to win, but they’re plugging away. John Cox just culled and has a limit on a frog, and Brandon Cobb has four for about 13 pounds that he’s caught flipping.

Josh Douglas just brought in his second keeper of the day. Look for him to grind it out on the ledges and fill out his limit as the day progresses. 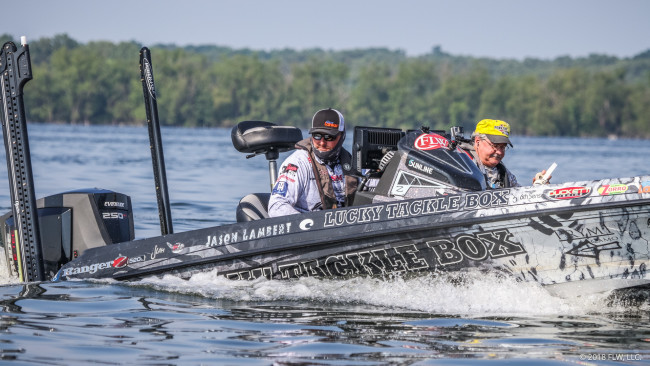 Jason Lambert is calling it a day. He’s got over 26 pounds and doesn’t need to catch anything else today. #IdleTime 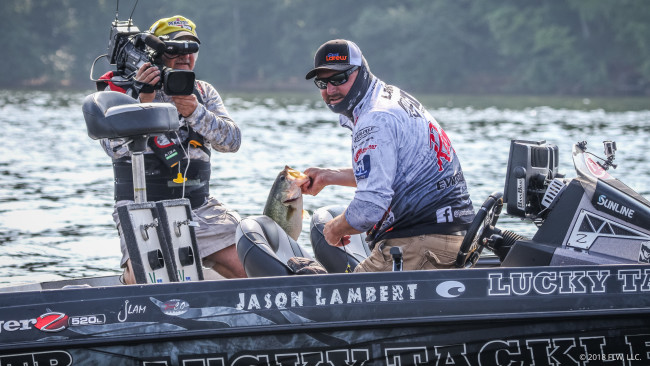 Jason Lambert just caught like an 8-pounder Or a 9-pounder. It’s huge. “I don’t even know what to do at this point except ride around and eat a biscuit.”

Mark Rose started his day with a 6-pounder and he’s got three in the boat now. He made a big comeback on day two to get into the top 30 and keep his Pennzoil Marine Angler of the Year lead intact.

We’ve got a pile of fish catches now, but most of the field is still shy of a limit. We just ran through and got the spreadsheet updated, and you can check it out there or on the leaderboard under FLW Live.

Josh Douglas just caught a 3-pounder to get himself going. He’s on the board! 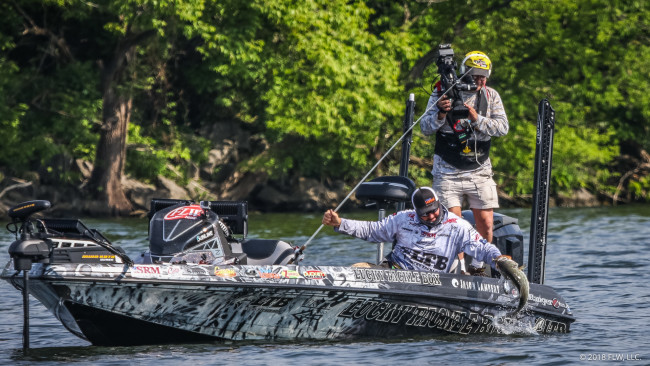 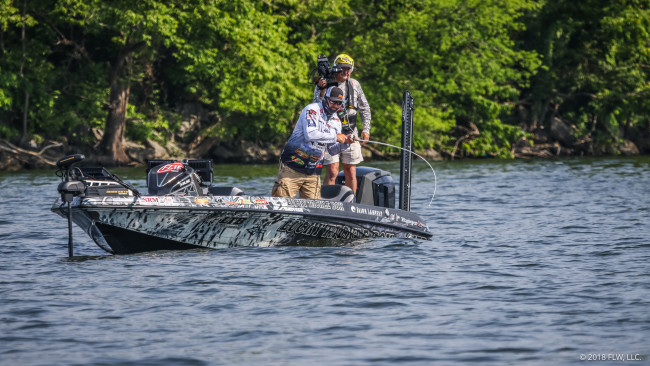 Jason Lambert just caught another big one to cull. We’ll probly get a better estimate in good time, but he’s got to be pushing 24 or 25 pounds now.

Brandon Cobb just flipped up a 4-pounder. He’s fishing shallow and has three good ones so far. 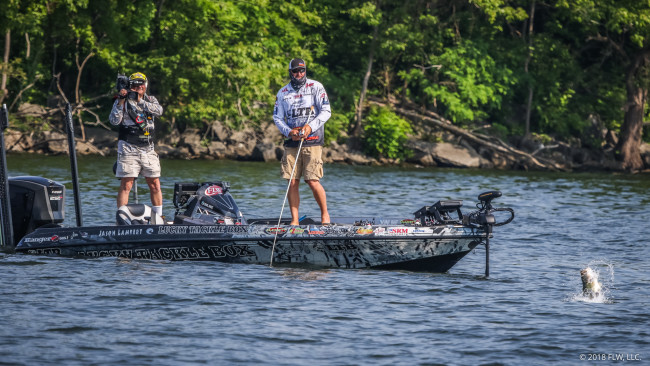 Jason Lambert just busted another 5-pounder. He’s over 20 pounds by a decent margin now and is working his way toward a mega-bag. Not that he needs it.

He’s pretty much catching all his fish on a Castaic Jerky J on a scrounger head.

Jeff Gustafson just lost about a 5-pounder. He’s trying to move up today, and with about 15 pounds in the boat already that would have helped a lot. 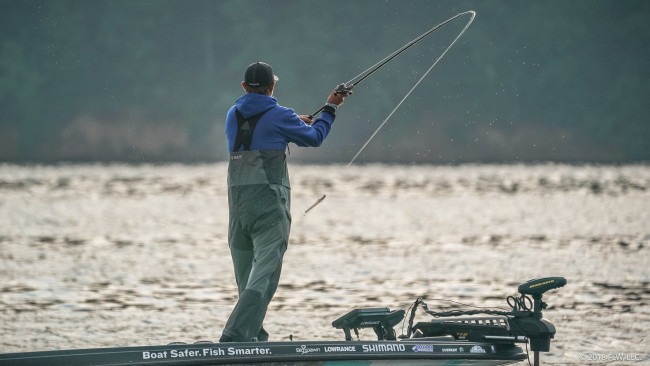 9:03 Still nothing for Douglas

Josh Douglas has had five bites this morning and landed zero. He says they’re not eating the bait, and now he’s cranked his Evinrude to idle a bit and try to relocate them.

Scott Martin is fishing far south, where the chance for a true Kentucky Lake giant is highest, but he’s not catching giants. Just good ones – his third keeper is about a 3-pounder.

Scott Canterbury has four decent keepers to start. He’s going pretty good today and fishing deep up north – he’s fished all over both lakes so far in this event and caught fish shallow and deep. So, he’s one of the more interesting guys to watch as the day goes on. 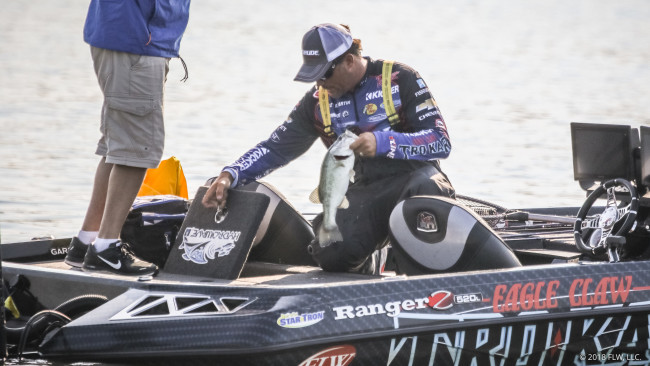 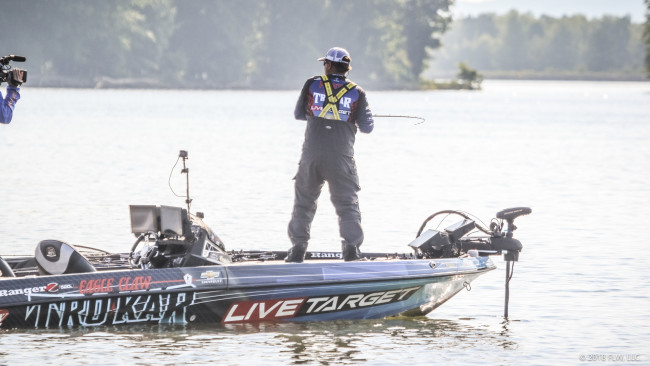 Scott Martin is fishing south of New Johnsonville at the moment and pretty much only got to his spot about 10 minutes ago. He’s cooking now, and just caught a 3-pounder and a 4-pounder to get going.

Earlier this morning, shortly after Randy Haynes left the spot where he and Jason Lambert started, Randy Haynes came back to takeoff and withdrew from the tournament. There was no rule violation by Lambert, but Haynes had a technical violation of Rule No. 11 for failing to compete on a day he was qualified to fish. There will be a full update on FLW Live at 8:30 a.m. CT. 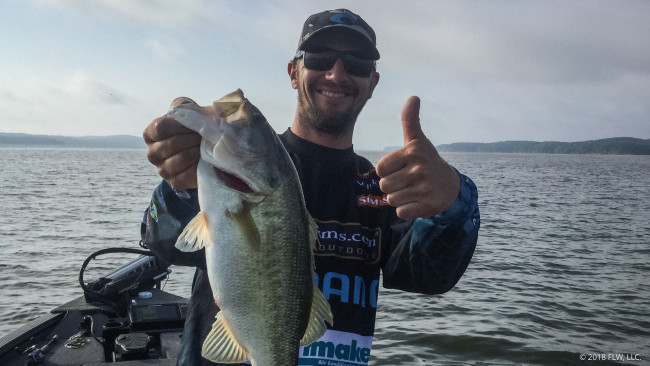 Jeff Gustafson just filled out his limit with two good ones. He’s got about 14 pounds now. With four in the ‘well, Matt Arey has over 10 pounds. 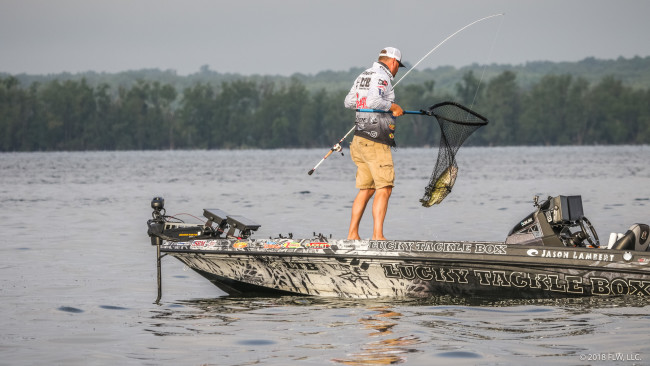 Jason Lambert just caught a 4-pounder to get to 20 pounds. We’ll have some Haynes news soon, but right now Lambert is running away with this thing. 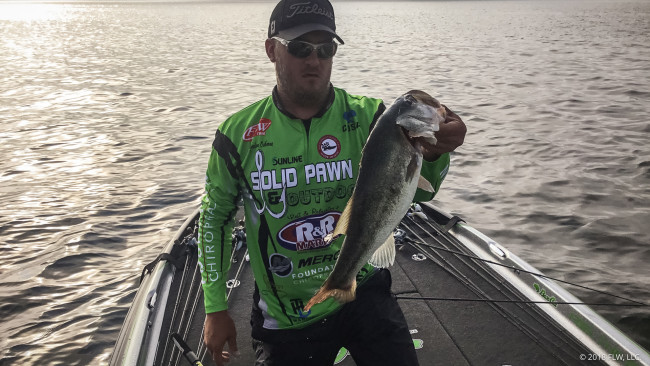 Jeff Gustafson has three keepers now. He’s starting pretty fast. Bill McDonald is off to a good start too, with two good ones. Jordan Osborne just got on the board with a 5-pounder.

Down south, Andy Morgan just started fishing and caught a 2-pounder off a dock and Scott Martin is still running.

7:30 Lambert with another good one, Stewart

Jason Lambert just caught a 5-pounder. Tyler Stewart is fishing down by Paris and just boxed his first keeper. 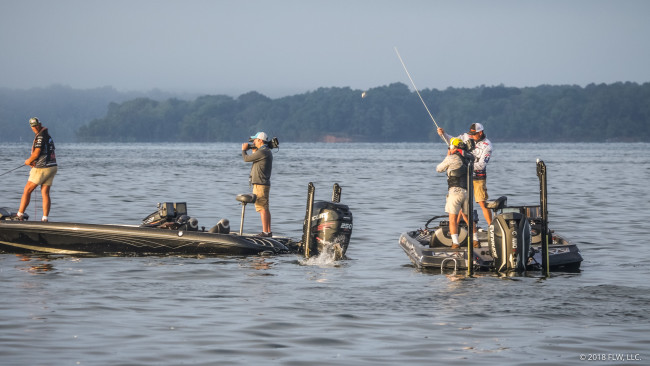 Jason Lambert just caught another keeper and lost one. Fishing on top of him, Randy Haynes is still on a blank.

Dylan Hays and Koby Kreiger are both on the board early. Kreiger with a jerkbait fish caught near takeoff and Hays with three decent keepers from the takeoff region as well. It appears the release-fish pattern is booming. 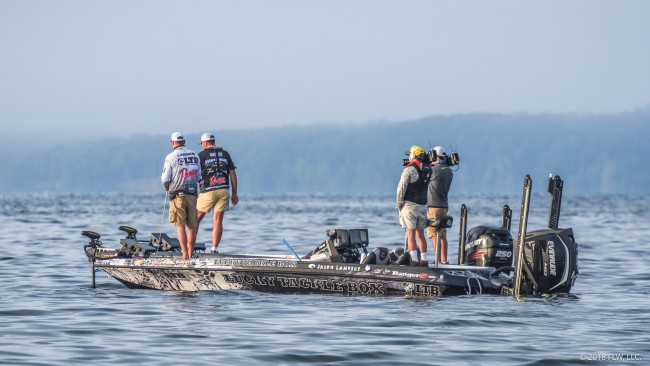 Austin Felix is our first pro on the board today, getting things going with a solid 2-pounder. 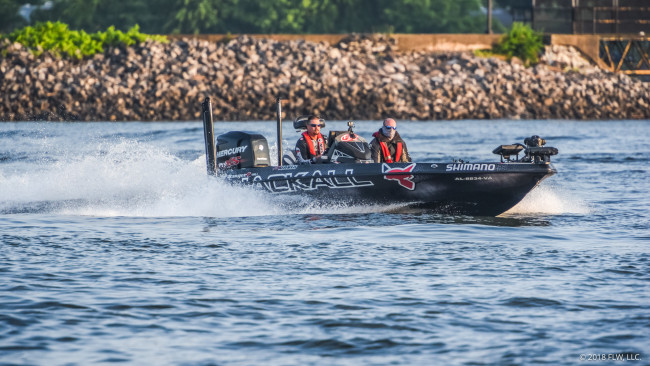 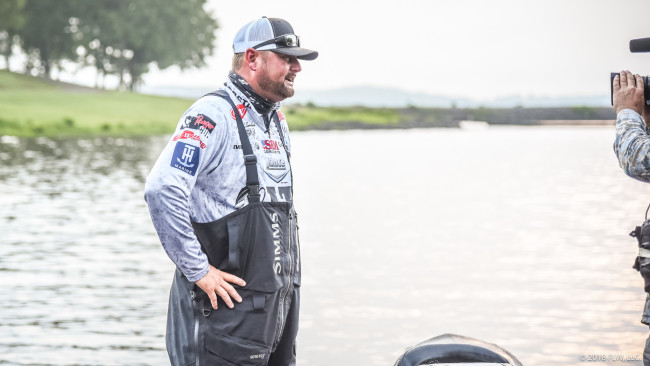 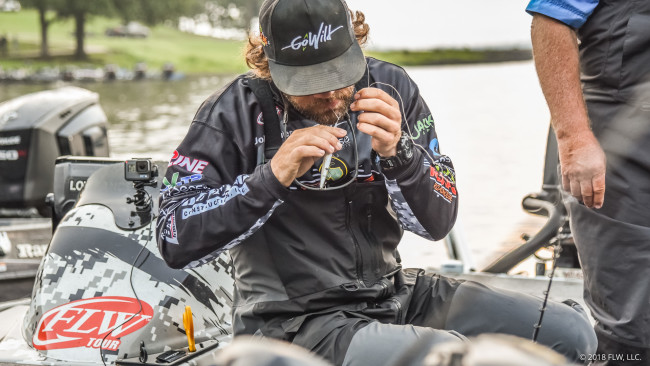 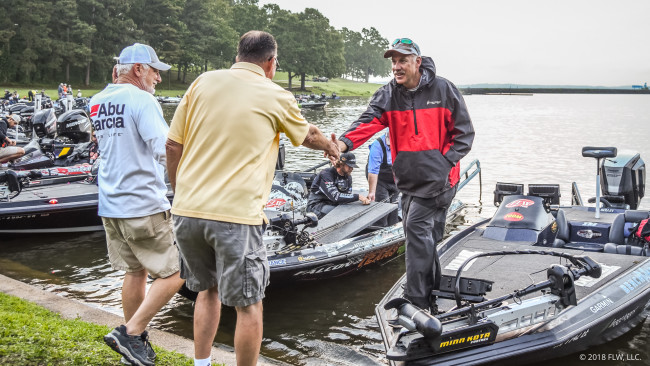 6:30 It could be a ledge battle for the ages

Through two days of the FLW Tour presented by Costa on Kentucky Lake the fishing has been a little tough for everyone but Randy Haynes and Jason Lambert. Though good weights are coming in across the board, keepers and kickers have been hard to come by, as evidenced by Austin Felix hanging in the top 10 with just nine fish. Even for Haynes and Lambert, the fishing has been so-so, with the duo only rarely igniting those flurries of offshore action that Kentucky Lake is known for. Of course, through it all, Haynes and Lambert have opened up a pretty big margin over the rest of the top 30, though catch-up bags are for sure available on Kentucky Lake.

Today is going to be sweltering, with a chance of thunderstorms and tons of humidity. Other than that though, the conditions should be pretty good, with not much wind and plenty of potential for the top 30 pros. It rained overnight, but pros took off into a blazing Kentucky sun.