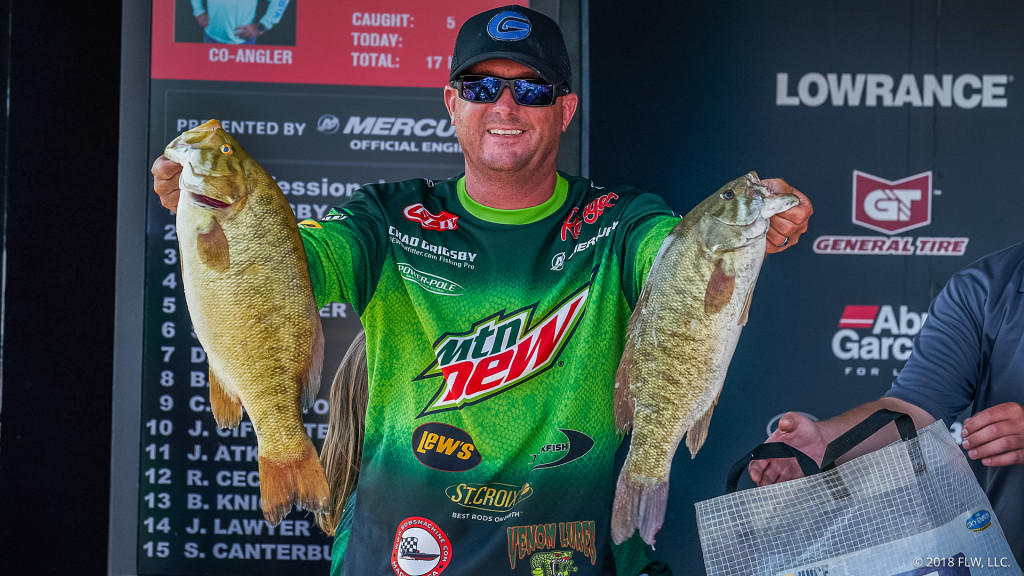 Chad Grigsby figured his only chance at making the Forrest Wood Cup was by winning at St. Clair. He’s halfway there, but he’s far from assured of anything with the way the lake is fishing.

The Maple Grove, Minn., pro sacked up 24 pounds, 4 ounces to retain his lead at FLW Tour stop No. 7, which is presented by Mercury. That weight has him as the only pro to crack the 50-pound mark after two days (50-1, to be exact), but he only has a 4-ounce lead over Dylan Hays going into the weekend thanks to even more massive bags behind him.

Weights typically drop on day two, and one would certainly expect that after a day one featuring 39 limits of more than 20 pounds. Instead, the fishing got even better. A total of 50 20-pound bags crossed the weigh-in stage today (36 pro, 14 co-angler), with Hays cracking the derby’s biggest bag at 26 pounds, 7 ounces.

That said, Grigsby is pretty happy with how his tournament has gone so far.

“I’ve had to adjust every day, but I feel like I’ve managed to stay one step ahead of the fish so far,” says Grigsby. “If a bait isn’t working within five minutes I try something else. You just keep rotating until they tell you what they want.”

Like he did on day one, Grigsby made a key bait switch to something he hadn’t even thrown in practice – a smaller-profile, “super-finesse” bait – and immediately the bass told him he made the right choice, as he had all his weight by 10 a.m.

After that, he went looking for other areas near his on the southern section of Canadian waters, but was unable to really expand on his pattern or area. Fortunately, his area is pretty large, with a few sweet spots tucked in it.

“I have some waypoints in there that I follow,” Grigsby says. “One of them – I don’t know why – but I’m pretty much guaranteed a fish every time my boat is right on it.”

While the weather has cooperated thus far – today saw bluebird skies and dead-calm conditions – St. Clair is notorious for getting rough on weekends due to boat traffic. Considering he’s fishing the main lake, Grigsby might have to factor that into his game plan, though he says he’s not worried.

“I’m protected, and a little bit of wave action would actually be good,” Grigsby says. “I know where some good fish are at. I have the mindset to win this thing, and I’m confident I can.”