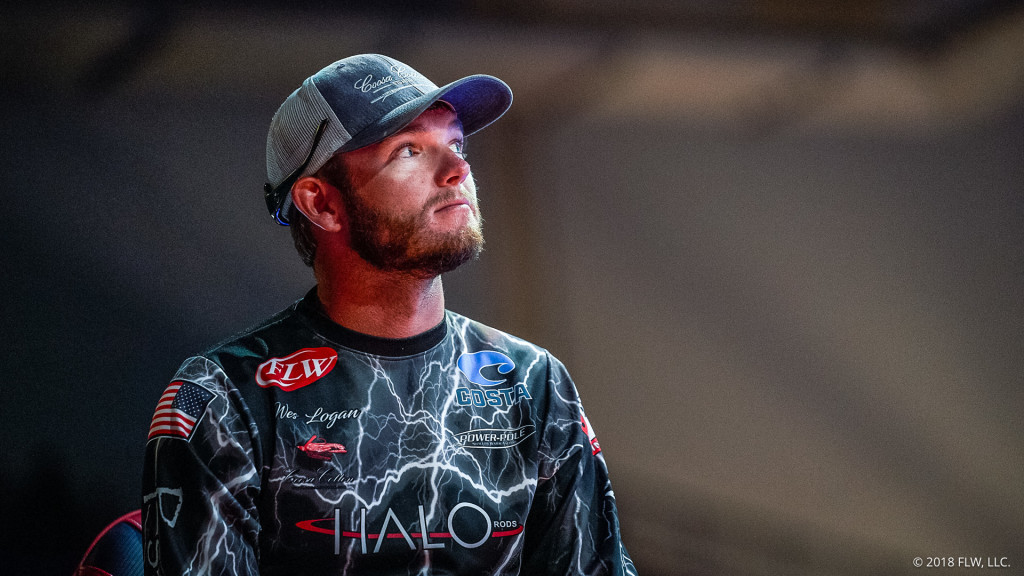 Hindsight can be a helpful tool or a dangerous one for a tournament angler. On one hand, it’s useful for evaluating decision-making. On the other, too much time spent looking back can put a dent in a guy’s confidence. Now that pros have had some time to reflect on the 2018 Forrest Wood Cup, we wanted to know what their takeaways were from the tournament, and what they learned. Did they do all they could, or were there missed opportunities? This article is one in a series of “Cup Reflections” that dives into their post-Cup thought process.

On one hand, the Forrest Wood Cup couldn’t have gone better for Wes Logan.

On the other, when you catch only one fish that final day and let a chance to win slip through your fingers, you’re going to do plenty of second-guessing.

“Would I have done some things differently? Definitely,” says Logan.

Decision-making and luck can be huge parts of tournament fishing. Unfortunately, Logan ended up on the wrong end of both that final day.

Looking back, his decision to start the final morning beating the bank with a Brian’s Prop Bee and a buzzbait is what Logan credits as his biggest mistake of the tournament.

“Obviously, hindsight being 20/20, had I known the deep fish would bite early I would’ve stayed out there all day,” Logan says. “I actually contemplated it the night before because I thought it was a more sure way to catch a limit, but everything up until that point told me to start shallow. Obviously, I didn’t make the right choice.”

Based on what the fish had told him, it’s hard to fault Logan’s decision.

He actually started day one of the event fishing deep brush piles and went until 1 p.m. without a single bite. Figuring his tournament was as good as over, he bounced shallow for the heck of it and promptly caught a 2-pounder and a 4-pounder. He fished another hour up shallow without a bite when a light bulb went off.

“I thought maybe the deep bite would turn on in the afternoon,” Logan says. “I ditched the bank, and on the first brush pile I pulled up to I caught three in three casts. Once that happened I thought I had it figured out.”

Day two only solidified his thinking when he started shallow and caught three right off the bat. He actually had filled his limit by the time he went out deep in the afternoon. Sure enough, his deep brush piles were on fire again, as he culled up a few times thanks to that late bite offshore and ended up with 12-4 for the lead with a two-day total of 23-13.

“What do they say about fishing? ‘The second you think you have them figured out they’ll change on you.’ They certainly did, but I still can’t figure out why,” says the Alabama pro. “That’s what gets me. Fish don’t change in August when the conditions haven’t changed in weeks. Nothing in practice or during the tournament told me the fish would bite early that final morning.”

Perhaps more painful than questioning his decision-making the last day is that Logan knows he was around the kind of fish that could’ve given him a chance to win on Sunday.

“Right away I had a 4-pounder follow my buzzbait, and then a little while later I had 12 pounds go swimming right by me,” Logan recalls. “Then I saw two more 5-pounders. So I know I was in the right area. They just weren’t biting.”

The nail in the coffin that made Logan realize it probably wasn’t meant to be was when a giant school of 2- and 3-pounders came up busting all around his boat. He cast everything he had at them. Nothing.

“I had people tell me afterward that they watched that happen on FLW Live and they couldn’t believe it,” Logan says. “They felt terrible for me. I still can’t believe it. I hit some of them right on the head, and nothing.”

Logan might not have had the finish he hoped for that final day, but he is quite proud of how he handled the adversity. While many young pros would’ve easily gotten spun out when nothing seemed to be going right, Logan insists he stayed confident he could catch a limit and still win up until about 3 p.m. Did he have moments where the adversity got to him? Sure. That incident with the schoolers was rough, he says. As was when he finally went deep and found Clent Davis, surrounded by boats, on the first spot he wanted to fish.

“When I saw that something told me he had them and they’d bit deep early.

“Despite it being my first Cup and everything that happened that final day, I never let my nerves or anything get to me,” Logan adds. “I wish I’d made a different decision, but I thought it was the right one at the time. I stuck with it and figured I’d let the chips fall as they may. They just didn’t fall my way.”