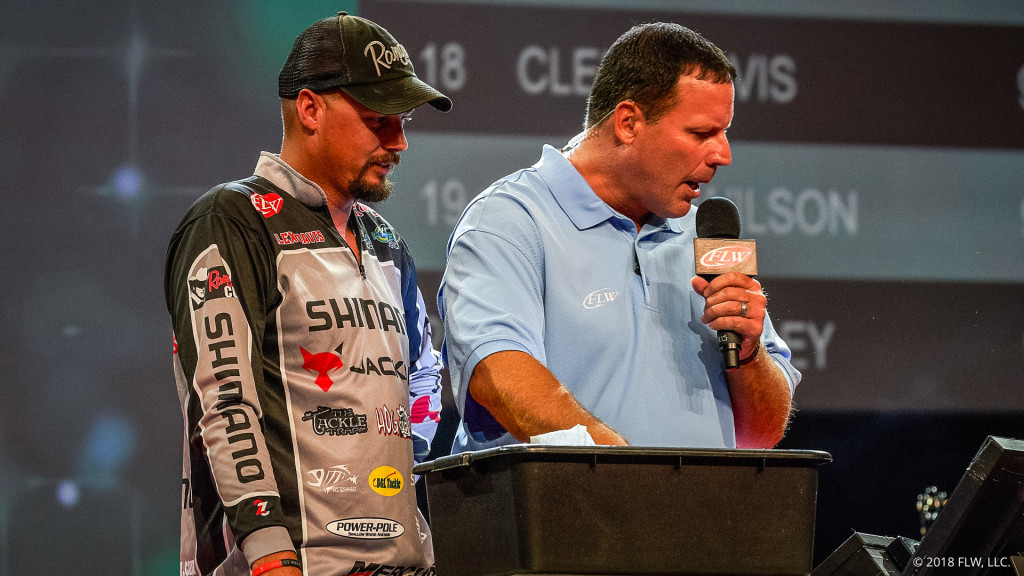 Hindsight can be a helpful tool or a dangerous one for a tournament angler. On one hand, it’s useful for evaluating decision-making. On the other, too much time spent looking back can put a dent in a guy’s confidence. Now that pros have had some time to reflect on the 2018 Forrest Wood Cup, we wanted to know what their takeaways were from the tournament, and what they learned. Did they do all they could, or were there missed opportunities? This is one in a series of “Cup Reflections” that dives into their post-Cup thought process.

Alex Davis is convinced he found the Forrest Wood Cup-winning spot at Lake Ouachita. Seeing 60 pounds of bass chase up a fish you caught will do that to you. What will drive him crazy is he’ll probably never know what happened to it on day two.

“I just want to know,” says the day-one leader. “I wish I was a local so I could go and figure out why. As long as I figure out why later on then I’m OK. This is one I’ll probably never know.”

For context, Davis had heard all the dock talk about the grass being a major player this year. That suited him just fine as he’s one of the best at flipping deep grass thanks to his years guiding on Lake Guntersville.

In pre-practice he didn’t even bring a rod, instead spending his time simply looking for the best grass patches. Then in official practice he spent the first two days doing nothing but flipping.

“I got four bites the first day and two bites the second day,” Davis says. “So it obviously wasn’t a way to do a lot of catching, but the ones I was catching were all the right ones.”

It’s worth mentioning that at no point during pre-practice or official practice did Davis ever spend any time looking offshore for brush piles; something he’d come to regret (more on that later).

Regardless, late in the afternoon of day one Davis went to one of his grass patches on a hump on the east side of the lake. He set the hook into a 3 1/2-pounder, but it’s what happened next that got him excited.

“I went to flip it in the boat, and there must’ve been 20 of them with it,” Davis says. “They were in such a frenzy they were actually running into the side of the boat. When I saw that I was like, ‘woah.’ I was excited.

“I’ve only seen that happen a handful of times on Guntersville, and the last time was during practice for a tournament. I went back to that spot and won the tournament there. So I’ve seen what can happen when they get like that. Only, it just didn’t happen [in the Cup]. I sure did think it was going to though.”

After catching a tournament-leading 13 pounds, 10 ounces on day one, Davis made the decision to start day two tossing topwaters up shallow first thing when it was low light before running to that grass patch once the sun got up. Except, he never got another bite on that grass patch or any grass all day despite numerous stops. He finished with one keeper for 2-5.

“I don’t know if it was just a school that moved on,” he says. “I don’t know if they just didn’t bite that day but bit Sunday, or maybe they’re biting today. I’ll just never know.”

Looking back, Davis still doesn’t regret his game plan for either day. It obviously worked on day one, and if he had to do it all over again based on what he knew at the time he wouldn’t change a thing.

Now, knowing what he knows, he does wish he’d spent a little time looking around for some brush piles in practice as an insurance policy.

“After the tournament, everyone comes clean,” Davis says. “A bunch of guys said they had one or two brush piles where they could catch a quick limit, but it’d only weigh 5 pounds. Well, if I had one of those I’d have made the top 10, and if I did then I had a shot at the Cup.

“Still, what I’ve thought about every day since the Cup is what happened to those fish. I mean, if they bit for just 10 minutes every day it would’ve been over. I would’ve won based on what I saw. So am I happy about how I did? Absolutely. I learned a lot, but that will probably drive me crazy for a while.”