2017 Cup winner regrets nothing about third-place finish at Ouachita 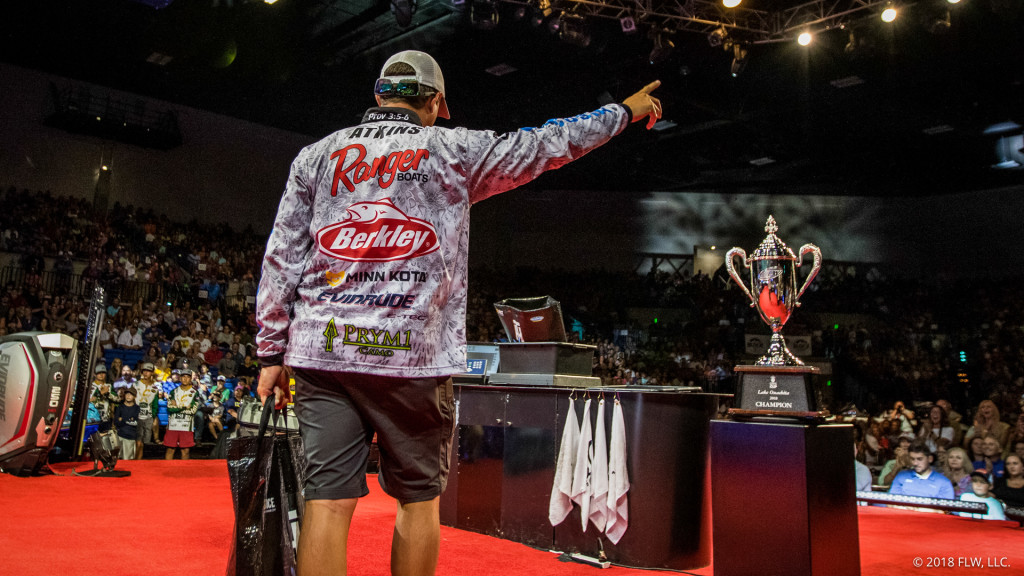 Hindsight can be a helpful tool or a dangerous one for a tournament angler. On one hand, it’s useful for evaluating decision-making. On the other, too much time spent looking back can put a dent in a guy’s confidence. Now that pros have had some time to reflect on the 2018 Forrest Wood Cup, we wanted to know what their takeaways were from the tournament, and what they learned. Did they do all they could, or were there missed opportunities? This article is one in a series of “Cup Reflections” that dives into their post-Cup thought process.

Justin Atkins walked away from the 2018 Forrest Wood Cup with a third-place finish, a close brush with what would have been an historic victory. The second-year pro won the Cup last year, and to win another back-to-back – let alone a second Cup in total – would have been unprecedented.

Despite what could have been, Atkins feels no regret. In fact, where grief might reside in other professional anglers, the Alabama pro only finds acceptance in knowing it just wasn’t in the cards this year.

“It almost worked out perfectly,” Atkins says of his game plan for Ouachita’s brutal summer conditions. “It’s kind of easy for me to say this just because I lived through it last year, but it just wasn’t meant to be for me to win, and it was meant for Clent [Davis] to win. To have the kind of phenomenal last day he had, it was just his time.”

Atkins’ game plan was unique in some respects, but not altogether different from those of Mark Rose, Jason Lambert and several other anglers targeting offshore fish. Atkins simply executed to the tune of three 9-plus-pound limits and 28 pounds, 12 ounces in total. It was good for third place, less than a pound behind second-place finisher James Niggemeyer (29-9).

And were it not for a few big keepers he lost during the tournament, Atkins may well have hoisted a second Cup in his first two years on Tour.

“I felt like I was almost fighting a demon all week,” he says. “I just could not get that one bite that I needed every day in the boat. But after it was all said and done, I felt like it just wasn’t meant to be. So as far as doing anything different, I had a great game plan, and it almost worked out.”

Atkins’ plan was one built from both preparation and trial and error. When he visited Ouachita in May to film some shoots for the new line of topwater baits from Berkley (Atkins’ title sponsor), he saw “thousands” of cruising wolf packs along the lake’s shoreline. When he returned to pre-fish for the Cup in July, he saw few signs of those same fish and knew they had to have gone somewhere.

“I knew then when I came back if I wasn’t seeing them on the bank, that wasn’t where they were at,” he says. “I know the lake has a good population.”

After fishing standing timber for nearly two full days in practice with little success, Atkins decided he would target the offshore bite, win or lose. He spent almost all of his tournament time fishing offshore structure and areas laden with current, only fishing shorelines when he felt he was in good enough position to spend time searching for one big bite along the bank.

The one approach Atkins didn’t take – the one Davis did, and perhaps the approach that could have won Atkins the tournament – was fishing offshore brush piles. Despite marking several brush piles with his electronics and attempting to pull some fish from them in practice, Atkins says frustration won out, and he abandoned the brush piles during the tournament.

“I never caught one out of a brush pile the whole time I was there,” Atkins says. “I marked a ton of brush, and then in what little bit I fished I never caught one. For whatever reason – I don’t know what kind of tops they sink out there – I stayed so hung up in them, which was frustrating because I like to brush pile fish and I never have that issue.

“That’s the reason he [Davis] won. I got frustrated trying to fish brush because I was staying real hung up in it. Him knowing something to change to allowed him to be more efficient fishing it.”

Still, hindsight doesn’t always lead to regret, and Atkins is happy with his game plan and execution. It also helps him accept his fate that Davis crushed them on day three, landing a limit of 17 pounds, 13 ounces, and pulling so far away from the rest of the field that a couple culled fish were never going to change the eventual outcome.

“Had he not had a magical last day, and had he stayed on pace for everything he had caught that week, I lose the tournament by 6 ounces or 8 ounces [to Niggemeyer], and I really would have kicked myself then because you can always catch 6 more ounces,” Atkins says. “I fished hard, don’t get me wrong. I feel like you just get in a different mindset when you feel like you can definitely win the tournament. I never got in that mindset just because I couldn’t imagine winning with 10 pounds a day, and it almost happened.”

The 2018 Cup was a trial run of sorts. Next year’s Cup will once again be held at Ouachita, though the conditions have the potential for being drastically different in a year. Water level and temperature changes could make everything anglers learned this year obsolete.

Or almost everything, anyway.

“I told somebody earlier in the year, ‘Yes, I’m a world champion, but I’m still a rookie,’” Atkins says. “This is my second year. I still make rookie mistakes all the time. That was a learning experience that I thought was another rookie mistake; just not recognizing how tough it was and that we could win this tournament.”

Atkins may not regret anything about his Cup performance, but it sure seems like he learned quite a bit that he can apply to next year’s Cup should he qualify again. And learning a lesson like that – never giving up and maintaining a positive mindset no matter what – all but ensures the budding star will have a rematch with Ouachita in another year.