Kansas pro missed out on Cup dream this year, but he’ll be back 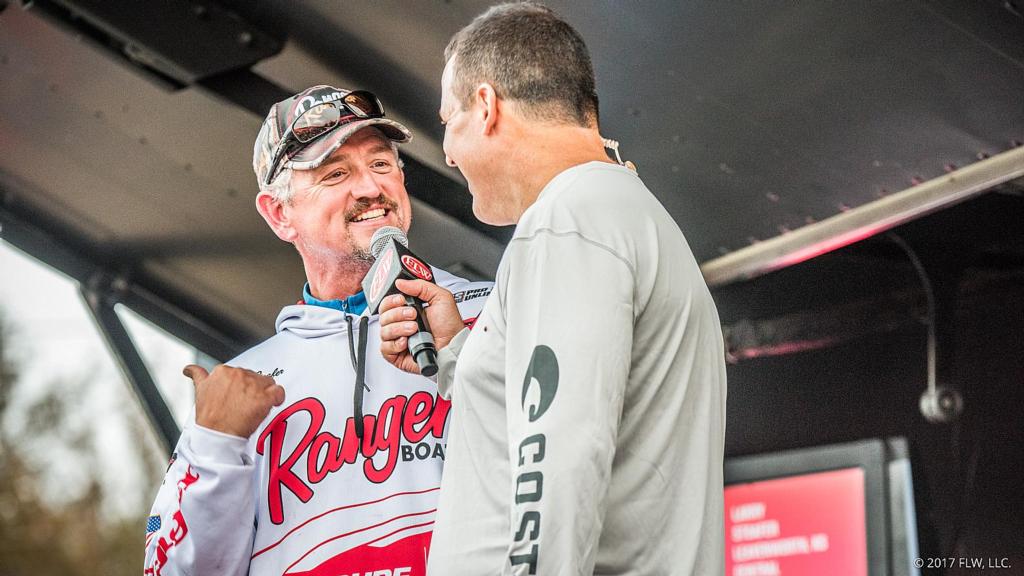 Larry Stoafer’s first trip to the Forrest Wood Cup didn’t end as he had planned. In fact, it didn’t even really start.

Stoafer, who qualified for the Cup via the 2017 Costa FLW Series Championship at Kentucky Lake, made his way to Hot Springs, Ark., just the same as his 55 fellow qualifiers. He practiced all week. He even participated in FLW’s community outreach event at the Garland County Library the day before the tournament, along with Cup qualifier and eventual 10th-place finisher Bradford Beavers and FLW pro Cody Kelley.

It was that same day when the Kansas pro began experiencing stomach pain. He attributed it to nerves at first, but as the day went on, the pain intensified until, shortly after registration, Stoafer’s wife, Jodi, took him to the emergency room.

“I guess it was 1:30 maybe,” Stoafer says. “They did a CT scan and right away realized what was going on. My gallbladder was actually necrotic [cells were dying], and they were really worried.”

When Stoafer arrived at the hospital and began receiving morphine for the pain, he was convinced he could still fish the tournament he’d been preparing for all year. He even called FLW Senior Director of Tournament Operations Bill Taylor to tell him he was still going to fish the Cup.

“As soon as we got the results of the CT scan back, my wife wasn’t going to let me get out of the hospital bed at that point since they were so concerned about the spread of infection,” Stoafer says. “It had a ton of infection already. So it was one of those acute cases where they had to go in right away and take it out. When guys were launching Friday morning, I was in OR prep.”

The surgery was fairly routine, but what followed was several days of complications from strong antibiotics doctors later figured out Stoafer was allergic to. It wasn’t until the following Tuesday – more than four days after the operation – that doctors discovered the allergy, and Stoafer’s recovery began in earnest.

There was never a chance Stoafer was going to be able to make it out on the water for fishing’s biggest event of the year, but the ordeal has only strengthened his resolve to return to Hot Springs for next year’s Cup.

“I’m looking forward to trying to do this again next year,” he says. “I have no idea how this happened the way it did. I’m going to try not to dwell on that because it will drive you crazy.

“God has a purpose for everything. I just can’t answer what this purpose was for this one, but we’re going to work our butt off to try to do it again and get back there.”

Fishing in the Cup would have been a special experience for Stoafer, who’s been preparing all year – including numerous trips to Ouachita – knowing he had already made it as an early qualifier. But the outpouring of support from his “FLW family” did soften the blow for the first-time participant.

“I love the FLW family and all the guys down there,” he says. “I can’t tell you how many texts and emails I got from guys while going through that process. It really made me feel good. My wife would tell me, ‘Hey, so-and-so just texted you they want to do this for you.’ I surely appreciate the whole FLW family. It meant a lot to me.”

Stoafer doesn’t know how, or if, he’ll make the Cup again next year, but his plan is to continue fishing the Costa FLW Series Central Division while also preparing for The Bass Federation National Semi-Finals, which he qualified for after winning the TBF state qualifier earlier this year.

One way or another, though, he’s going to do his best to fish his way back to the Cup in 2019.

“The hardest part of the FLW Cup is just getting there,” Stoafer says. “That’s a long, hard road, but I promise you I’m not going to give up on trying to get back again. Hopefully I’ll be back there next year.”

And if he does, you can bet Stoafer is going to be just as prepared, just as hungry and just as thankful to be there.