A Look at Lake Toho

Get to know Toho and the rest of the Kissimmee Chain 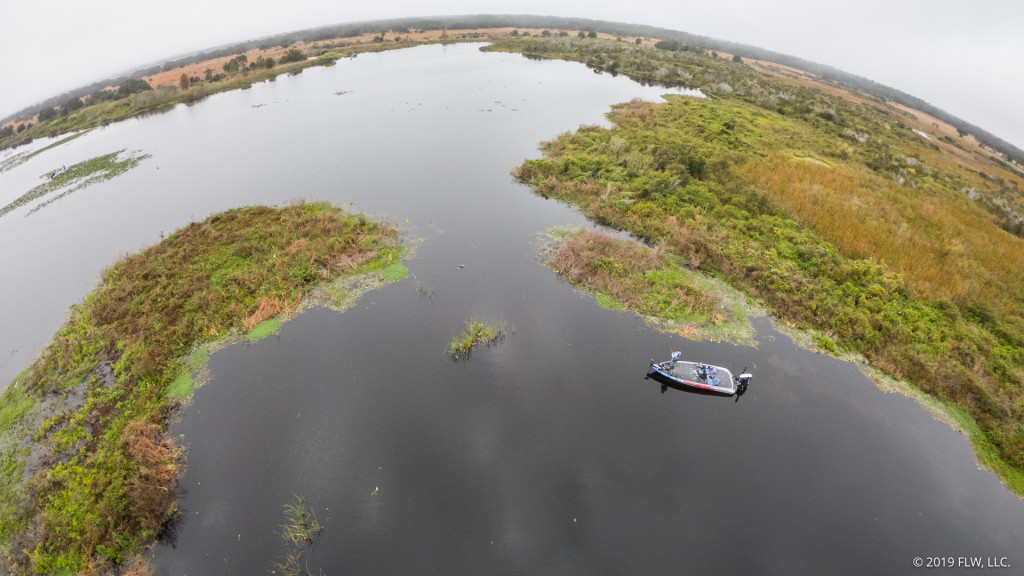 Stop No. 2 of the 2019 FLW Tour takes us to Lake Toho and the several other lakes strung along the Kissimmee River. Presented by Ranger Boats, the tournament will take off from Big Toho Marina on the north end of the namesake lake, but competitors will be able to spread out down the Kissimmee River into Cypress Lake, Lake Hatchineha (Hatch), Lake Kissimmee, and perhaps even Tiger Lake and Lake Rosalie if they’re feeling adventurous. 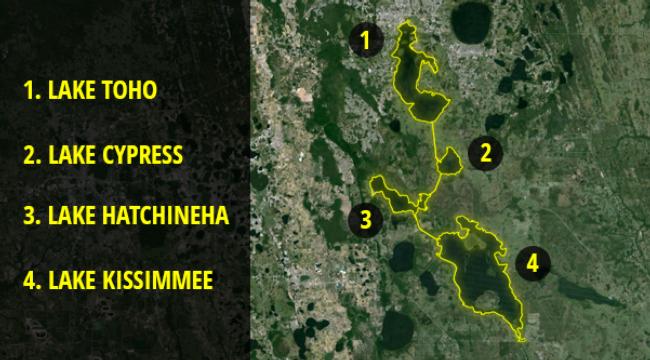 All the main lakes on the chain are connected by the Kissimmee River, which has been developed into what is essentially a string of canals running lake-to-lake. The two primary lakes are Toho and Kissimmee, and there’s about a 14 1/2-mile run between them composed of some brief sections of Cypress and Hatchineha and plenty of canal. The lock at the south end of Toho serves as the gateway to the rest of the chain. Current running through the river is one of the defining features of the chain and, to an extent, sets it apart from the typical Florida lake. 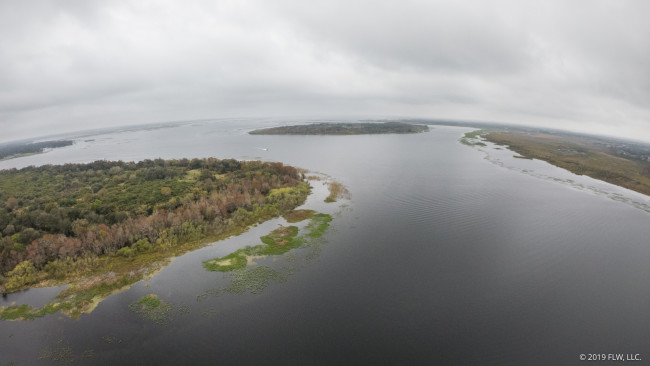 Lake Toho will probably see the most fishing pressure this week, but it’s not a guarantee to produce the win. Flipping through the pages of bass fishing history reveals that Toho and Kissimmee have accounted for about an equal share of wins, with almost nobody relying primarily on one of the other lakes in the chain.

Toho is the most developed lake on the chain, and it has more docks and canals than the others, but otherwise it’s fairly similar to the rest of the crew. It does, however, have the clearest water, so it’s probably the best for actual sight-fishing. Though, catching spawning bass that aren’t visible certainly has a lot of history in Florida that shouldn’t be discounted. 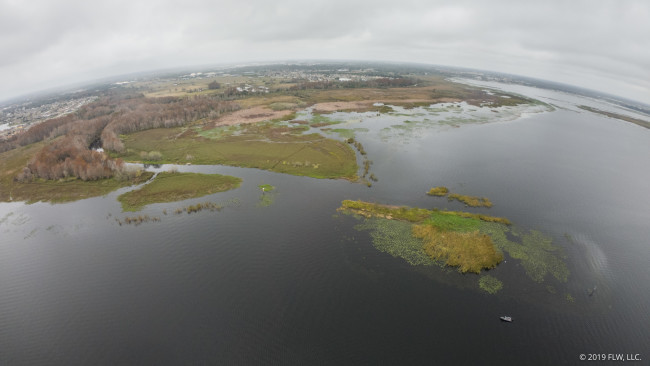 Back in January 2001, Dean Rojas set the all-time five-bass limit record for B.A.S.S. at the mouth of Shingle Creek on Lake Toho. He rolled in on day one of the tournament and landed on a pile of huge spawning bass. By the end of the day, he’d landed five for a total of 45 pounds, 2 ounces. Rojas went on to win the tournament with a total of 20 bass for 108-12.

Someone weighing 45 pounds would be a surprise this week. But, with the balmy weather and a stacked field, some truly gigantic catches might just happen. 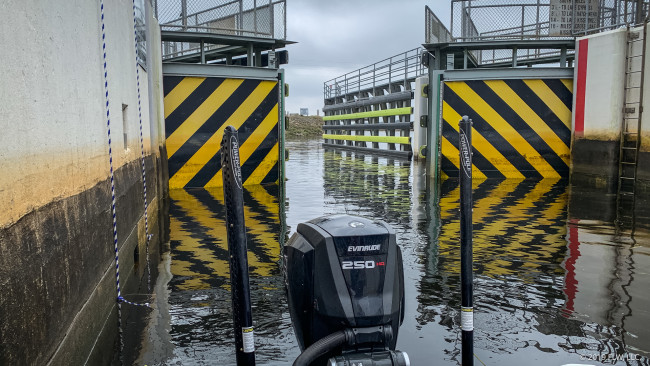 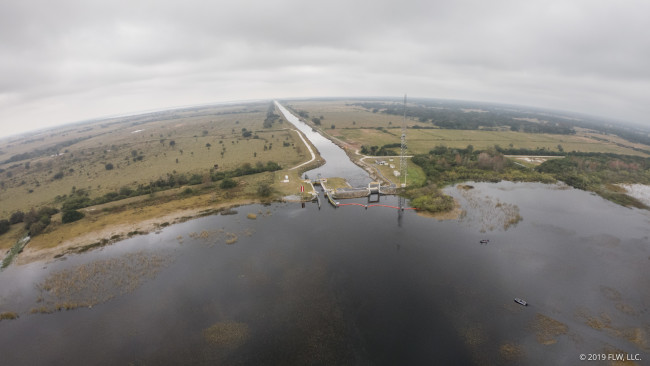 There’s about a 3-foot difference in water level between Toho and the downstream lakes.  A spillway lets the water leave Toho, and the lock alongside it is the only way boats can get out. The lock can fit about 15 boats in it per cycle, and depending on how much traffic there is and how good an angler’s timing is, getting through can take just a few minutes or more than 20 minutes. For travel time to Kissimmee and back to weigh-in, it’s an essential concern. 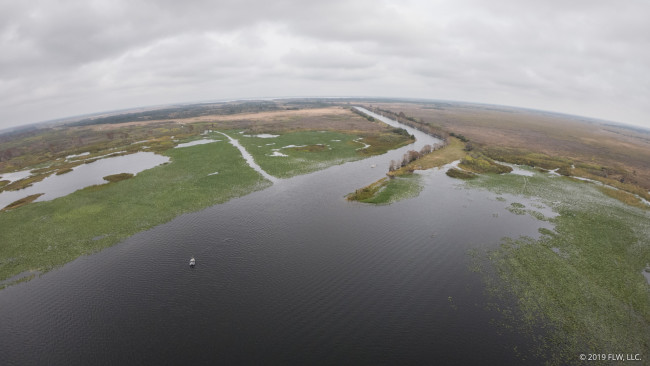 Hatchineha and Cypress are the two smaller lakes that are truly on the Kissimmee River, and they will produce some bass, but they’re more likely to be driven through by many anglers en route to Kissimmee. In years past, the canals and associated shell bars and current places between the lock and the mouth into Kissimmee have produced quite a few fish, most notably in the 2015 FLW Tour event, when Stetson Blaylock, Troy Morrow, Wesley Strader, Randy Blaukat and others all made hay in the current. 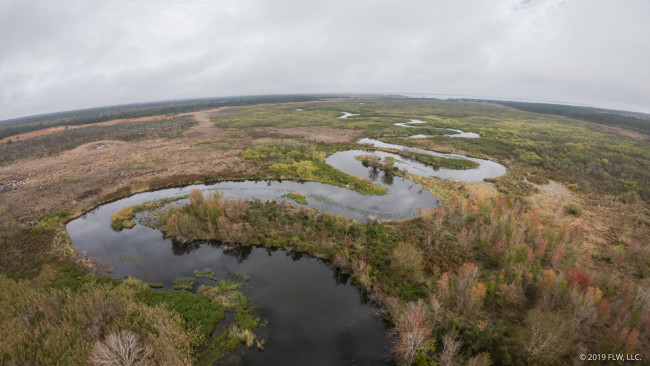 Attached by a small, winding creek to Lake Kissimmee, Tiger Lake could certainly produce some fish this week. It’s basically a bowl of Kissimmee grass and docks. Lake Rosalie is connected to Tiger by another creek, but it’s probably not going to be accessible to bass boats, though you wouldn’t want to bet against John Cox. 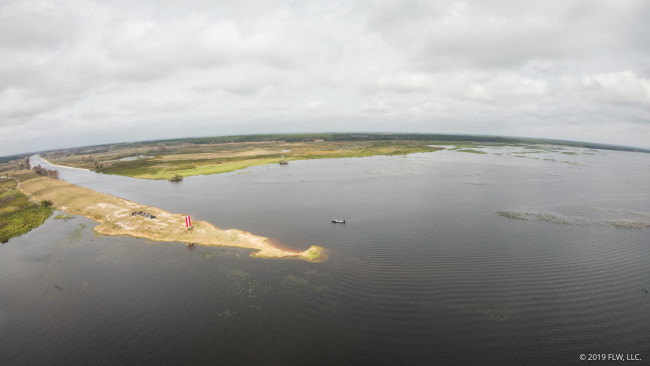 At around 30,000 acres, Lake Kissimmee is the largest on the chain, and would almost surely get the most attention if the lock wasn’t in the way. Even so, it’s got a rich history of giving up big bass. Kissimmee has all the usual pieces of Florida cover, from hydrilla to Kissimmee grass, pads and mats. 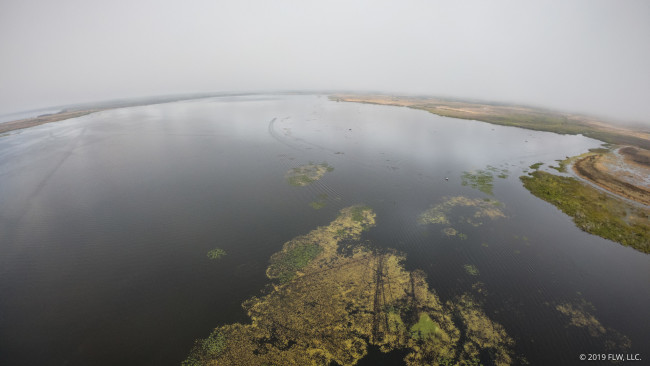 Two of the most popular sections of Kissimmee are North Cove (pictured) and Jack’s Slough. North Cove is protected by Sturm Island and has some of the best water clarity and lushest grass in the lake. Jack’s Slough is characterized by acres of pad fields and is where Luke Clausen won the Bassmaster Classic in 2006, and where Stacey King spent much of his time in 2015 when he finished fourth in the Tour event. Of course, all of the lake is really in play, as the entirety of it is rimmed with gorgeous-looking Florida cover. 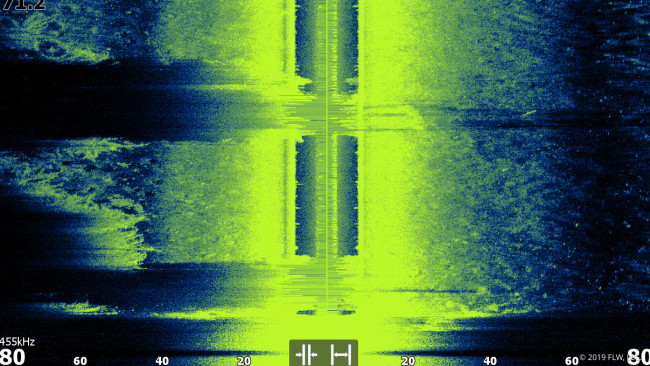 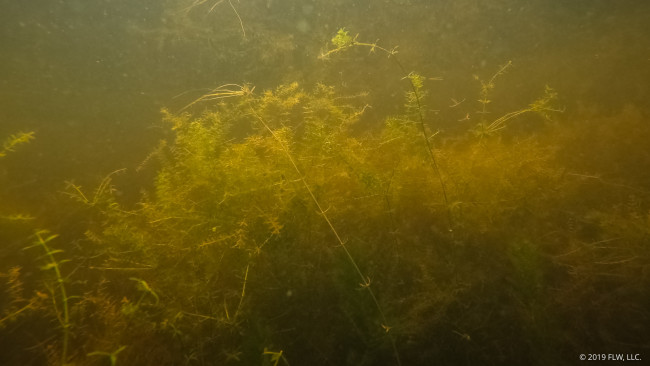 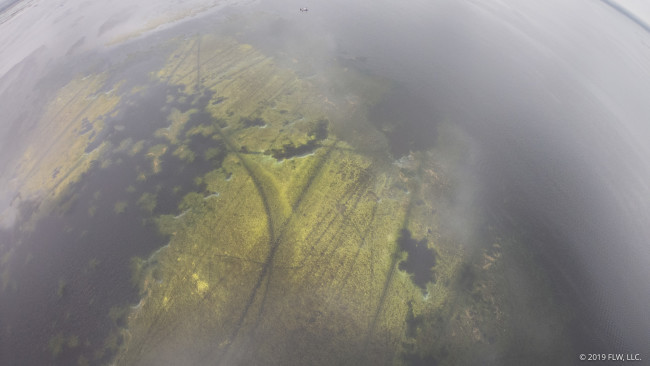 Fishing hydrilla has always been a player on the Kissimmee Chain, but this year it might be more important than ever. The south end of Toho is simply loaded with it, similar to some of the lakes on the Harris Chain, where offshore fishing was the dominant tactic last year. There is definitely a lot of potential for a true shallow Florida slugfest to break out this week, but the fact that the offshore grass looks so juicy could liven things up a lot. At the very least, it might be a productive stop on the way to and from Kissimmee. 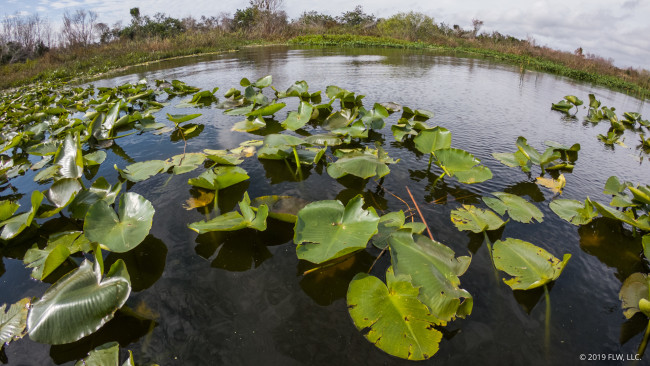 Any tournament on the Kissimmee Chain will feature near-constant references to pads. There are plenty of “flat pads” in the lakes, but the main thing to account for is spatterdock (Nuphar advena). Spatterdock has a very developed root system the bass will often clear off and spawn on, and the stems of the pads are extremely tough. Flipping a jig in the pads or dragging a worm across the root systems is a time-honored method for extracting bass. 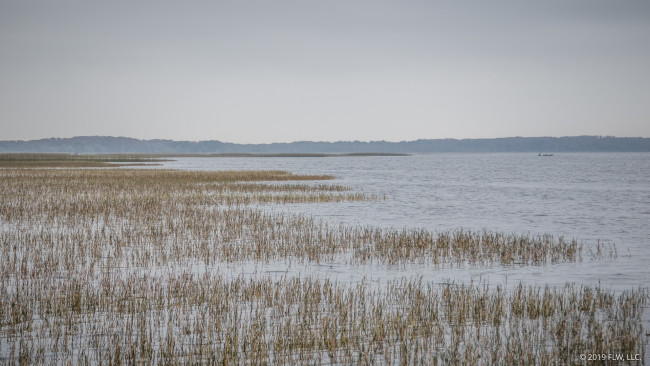 Kissimmee grass is an emergent grass that really looks like it belongs out of the water. It’s present on all the lakes, and can be extremely productive. A swim jig is one of the preferred methods for catching fish in and around Kissimmee grass. 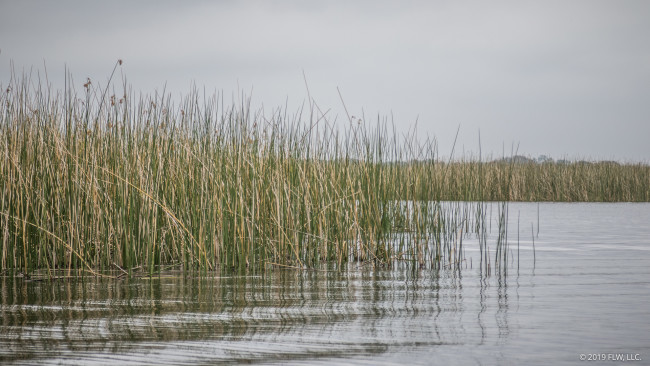 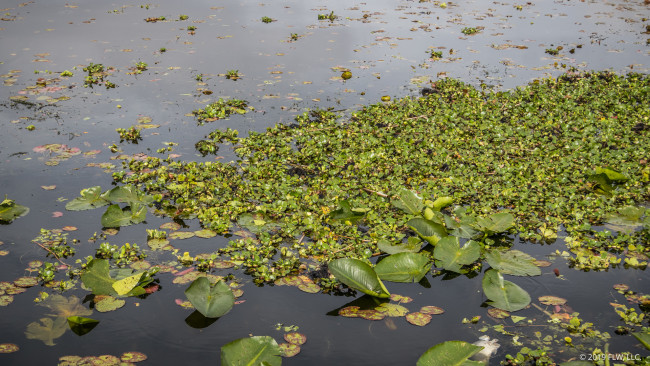 Of course, flipping is always going to play in Florida, and there is plenty of cover for it. From hyacinth, reeds and water lettuce mats to cattails and buggy whips, there is all kinds of stuff to flip. Cold fronts often bring flipping to the forefront, but that doesn’t mean it should be discounted as a technique when the bite is good. Big Florida bass like heavy cover no matter what. 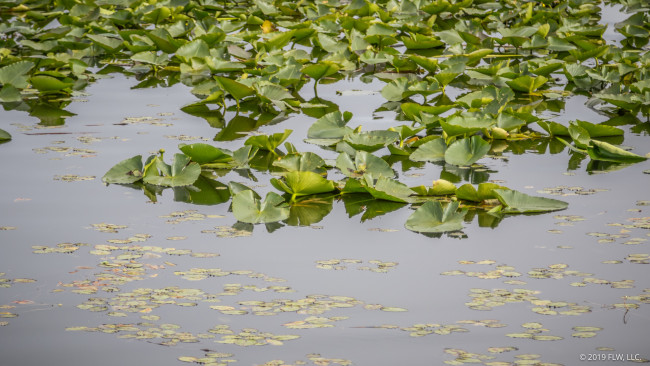 If you’re an FLW Tour pro who loves grass fishing, this could be the week for you on Toho and the rest of the Kissimmee Chain. With warming water and a great population of bass, the fishery should provide a real show from central Florida.