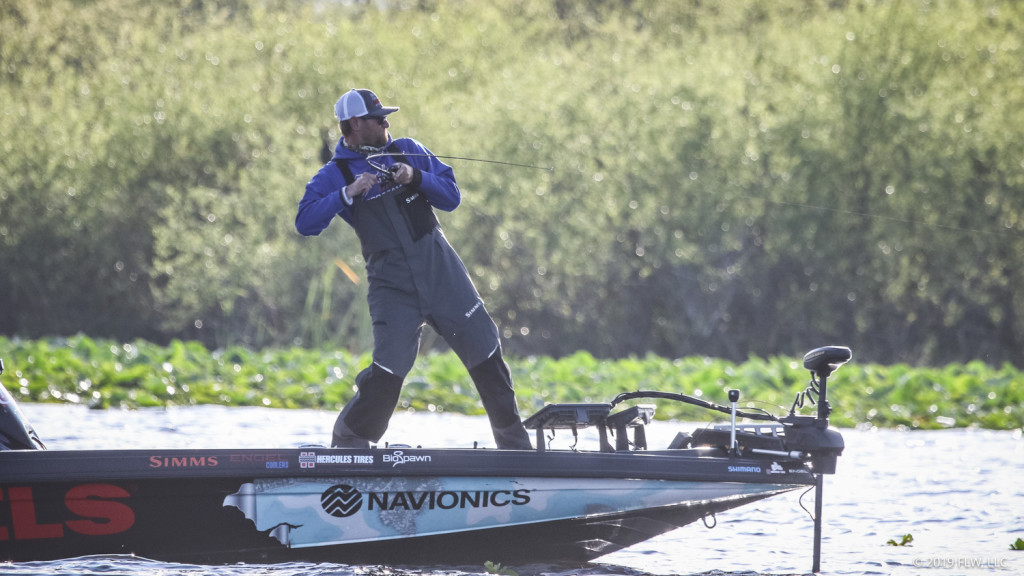 There have been a fair amount of movers and shakers on the unofficial leaderboard today. Most notable have been Tommy Dickerson, Wade Strelic and Darrell Davis, who have all surpassed the 20-pound mark to put themselves in the top 10. On the other hand, some of the top guys heading into the day (like John Cox and Aaron Britt) have slipped a little as their patterns have faded. Based on the the weight estimates, we’re looking to have a bunched up top 10 for Championship Sunday.

Fewer than 10 pounds separates 1st and 10th on the current leaderboard. Day four might boil down to what is essentially a one-day derby.

At this time we’re closing down the blog and leaderboard but make sure to check out the live weigh-in at 4 p.m. ET on flwfishing.com. It’s shaping up to be a good one. 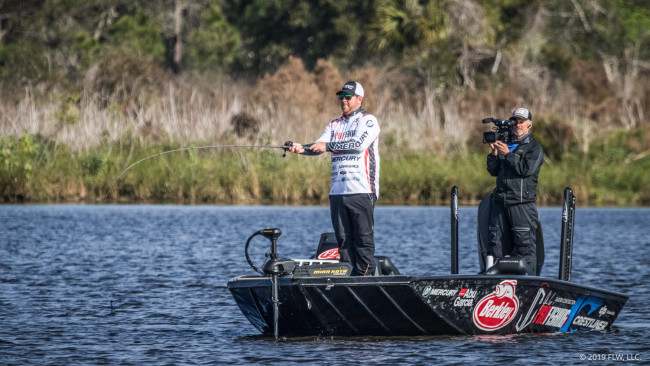 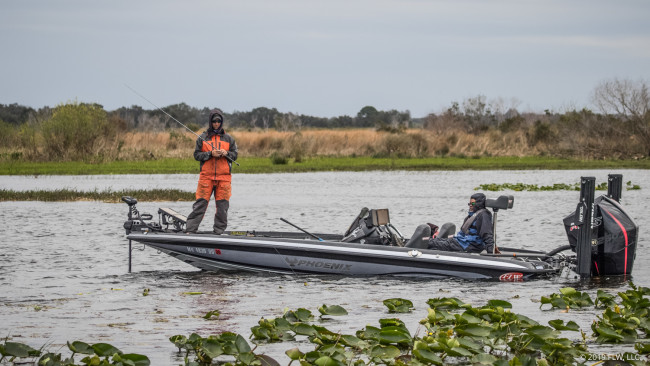 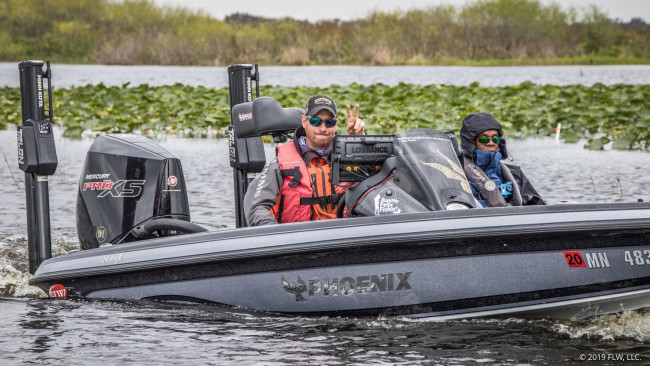 Austin Felix is in good shape. He’s been throwing back 3-pounders that won’t cull, and his 18-plus-pound bag has him in 10th place, unofficially. It’ll be tight come weigh-in if he doesn’t manage to upgrade, but he’s done plenty of damage today.

Aaron Britt has struggled most of the day, however. He just filled his limit. His 5-pounder earlier today is the only thing keeping him in range of the northern portion of the cut.

John Cox’s luck hasn't changed, as he is still stuck with five baby keepers. He’s still cruising around on his trolling motor looking for a couple bedding females to save his day.

Now that the clouds are rolling in, most guys are starting to throw on their rain suits. It isn’t supposed to come down hard, but we could get a few sprinkles. That could be enough to change some patterns as the afternoon wears on. Be sure to check out FLW Live to see how the final half hour plays out.

Josh Douglas just swiped the top spot on the unofficial leaderboard from Darrell Davis after boxing a 6 and a 3. 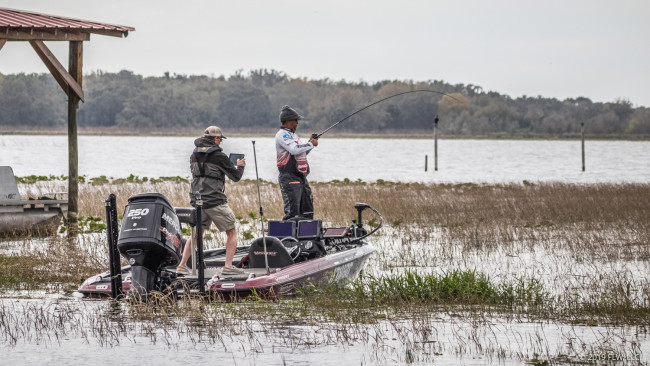 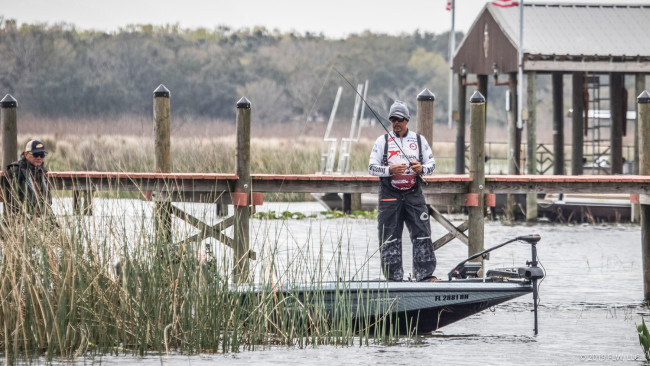 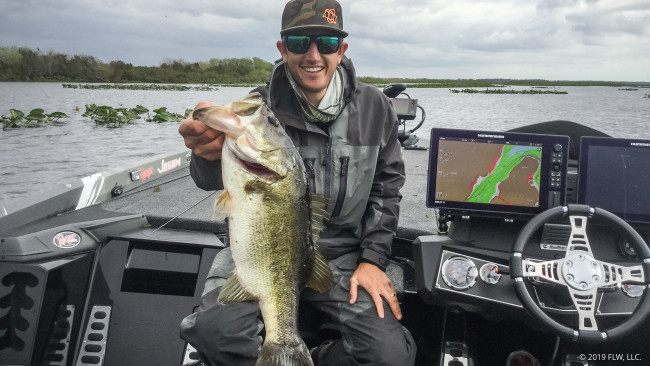 Darrell Davis just took over the top spot on our unofficial leaderboard after catching a 6-pounder. He is down in Kissimmee doing some junk fishing on some juicy grass.

Another guy to crack a biggun is Joseph Webster. His went about 7 pounds and will cull out a 1 1/2-pounder.

Wade Strelic is working on a pretty stout bag, too. Most recently, he added a near-6-pounder to push his limit to about 20 pounds.

We’ve seen at least 8 fish over 6 pounds today. Considering we’re down to 30 anglers in the field, that’s a mighty fine number of really solid fish. 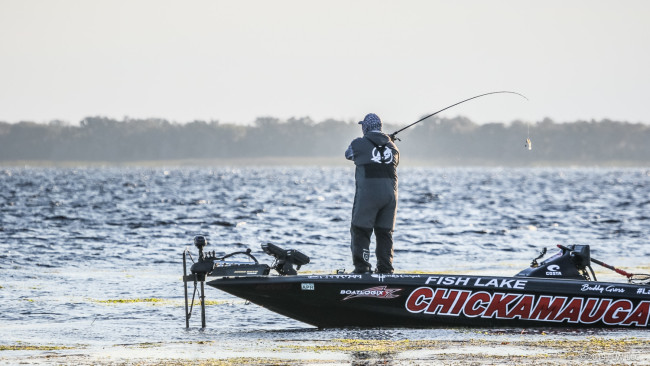 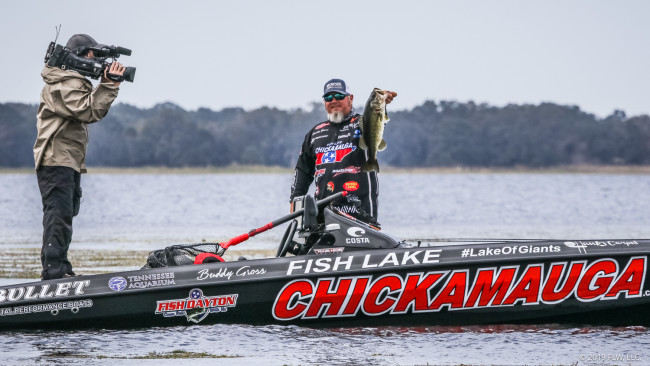 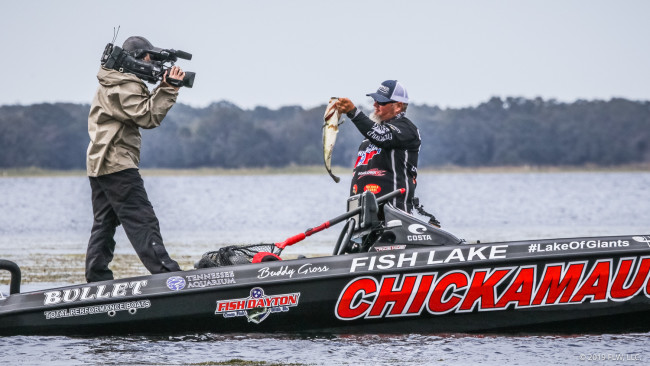 Douglas was able to snatch a 4-pounder in his primary area on Kissimmee, which he’s sharing with Tyler Woolcott and Casey Scanlon.

Right after untangling a backlash, Buddy Gross popped a 5 1/4 and a 3 1/2. His fish are starting to school in a gap between hydrilla mats and he is capitalizing on them with a white swimjig on the same cast.

Lastly, we finally caught up with Austin Felix, who has a bunch of 3- and 4-pounders that are worth about 19 pounds. Now, the Minnesota pro is looking for the kicker that will send him fishing tomorrow. 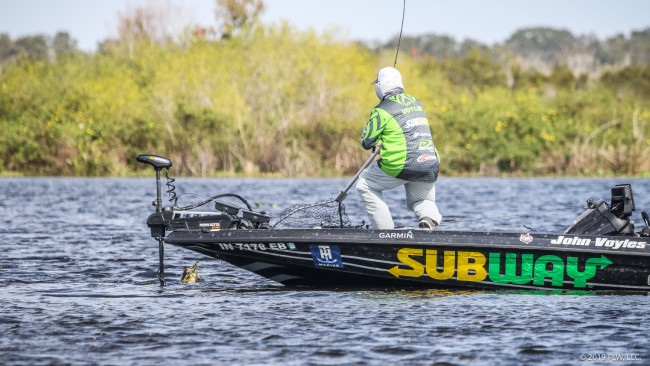 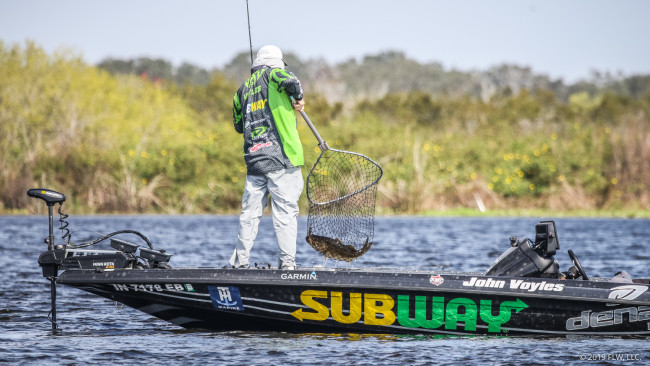 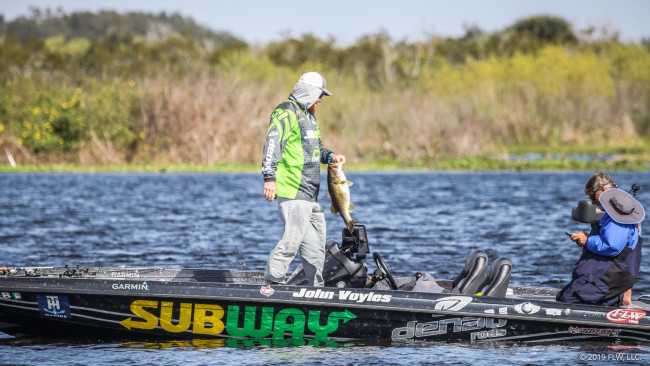 John Cox bailed on Tiger lake and locked back up to Toho. Despite today’s wind, Cox’s Marshal is reporting that he is looking for beds. “I didn't like how it felt down there so I decided to come back up here and give it a try.” It’s worked so far, at least a little bit, with Cox having landed a dink to fill out his limit.

John Voyles is finally on the board with a 6-pounder. That is definitely a good sign for the Indiana pro after slipping yesterday.

The northeast end of Kissimmee is loaded with boats. A couple areas are just stacked with pros, including Scott Martin and Bryan Thrift. Speaking of Thrift, he has a limit, which extends his consecutive-limits streak and gives him some room to breath and chase down some hawgs to upgrade a fairly small bag.

Maryland pro Bryan Schmitt is back in the game after sticking a big ol’ Toho bass, which is estimated to be 8 1/2 pounds. He is fishing a swimjig in an area packed with a bunch of other pros.

Aaron Britt finally hooked up with the fish he has been waiting for. He was ripping a Rat-L-Trap through the grass to get hit by the 5-pounder. He seems way more relaxed now that he finally broke the ice on his juice spot. “There’s 30 pounds swimming out here, there’s no doubt about it.” After losing a couple nice ones, that 5-pounder had to feel extra good.

Scott Martin is chipping away. He has a limit of 11-12 pounds that includes a 3-pounder and a 4 1/2-pounder. He’s fishing very patiently. He knows these fisheries well, and it shows in his methodical approach, especially on a day like today.

It appears we’ve hit a midmorning lull across the Kissimmee Chain. The pros are changing baits and tactics like crazy looking for the right approach, but there’s just not much going on.

While ditching one bait and tying on a lipless crankbait, Tommy Dickerson noted, “Every day has been different, nothing is the same.” That certainly seems to be the case today, though Dickerson is among the few anglers who are figuring them out today. He has about 23 pounds.

Here’s a look at where we stand (unofficially) just after 10 o’clock:

Wade Strelic sits in 6th place currently, and he’s working on a fairly decent bag. He has a limit of about 13.5 pounds so far. 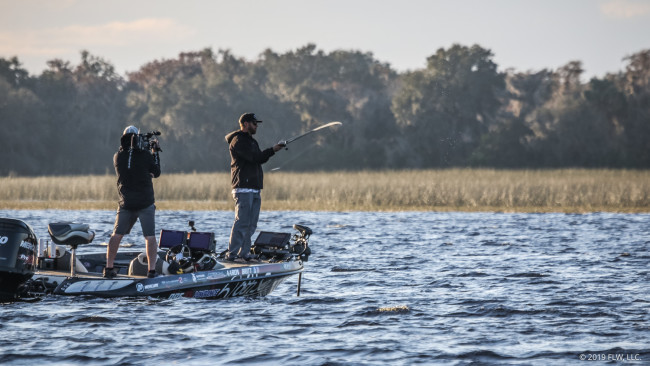 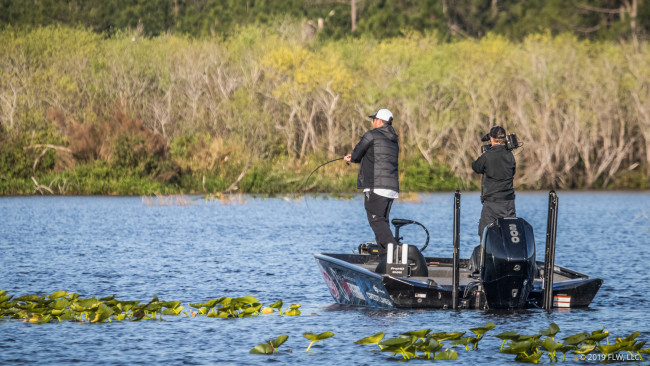 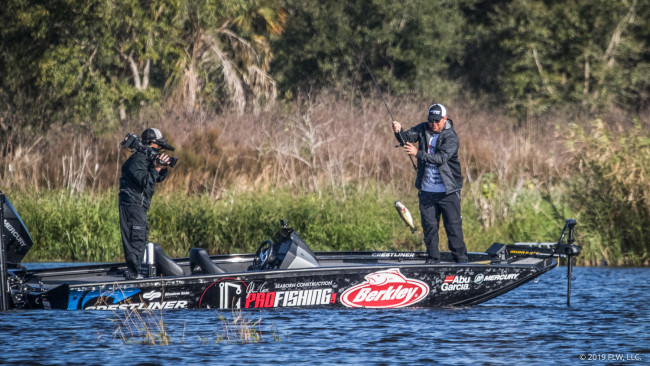 Cox is still chucking and winding in Tiger with four small keepers to show. Dickerson just culled up a pound or so after catching one on a Carolina rig, which brings him up to the 23-pound range. Aaron Britt is dragging a worm through his offshore peppergrass. He has lost two big ones and noted that those were the first fish he’s lost all week.

With the exception of Tommy Dickerson, it seems like the bite is much slower today on Toho. The pressure change of a new weather system rolling in might be affecting fish more than expected. With rain still in the forecast for the afternoon, it’s hard to say what might happen as the day progresses. 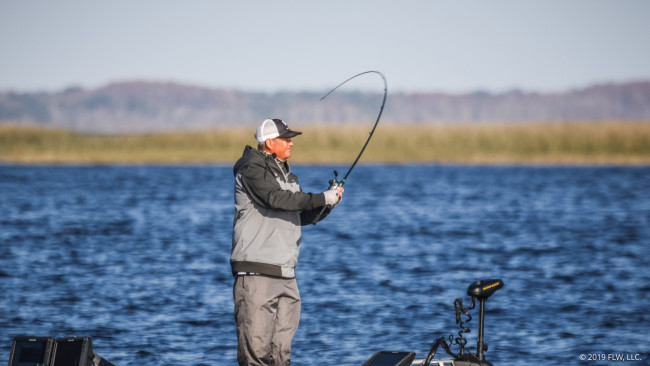 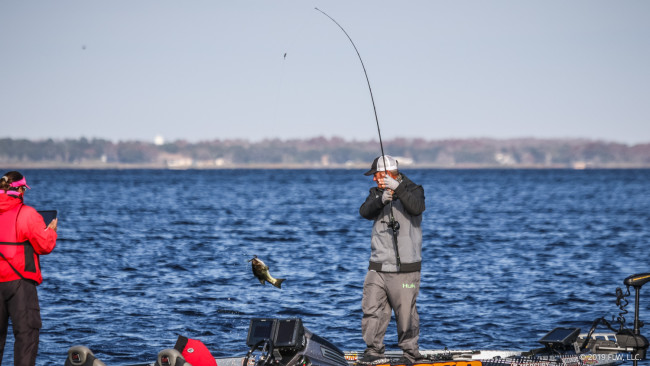 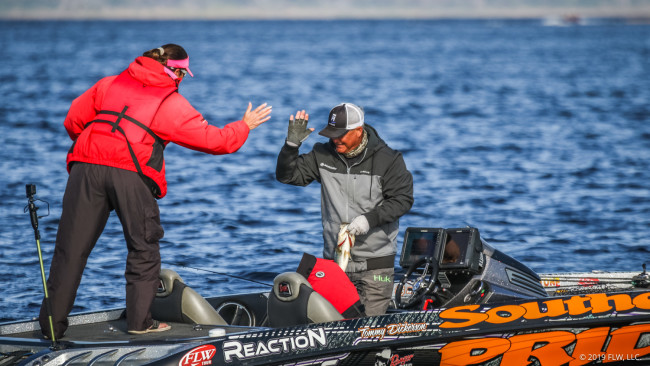 Tommy Dickerson is smokin’ ‘em right now. He has a trio of 6-pounders and a couple other decent fish for roughly 22 pounds. Dickerson is throwing a lipless crankbait in front of the spillway about 1 1/2 miles north of the lock.

After spending the entire first two days in Toho, John Cox made a move to Tiger Lake. It didn’t take long for his move to pay off as he boated his first small keeper minutes after arriving. He’s throwing blades through scattered lily pads in hopes of plucking out a few females.

On a side note, John is battling through a wicked cold this weekend. 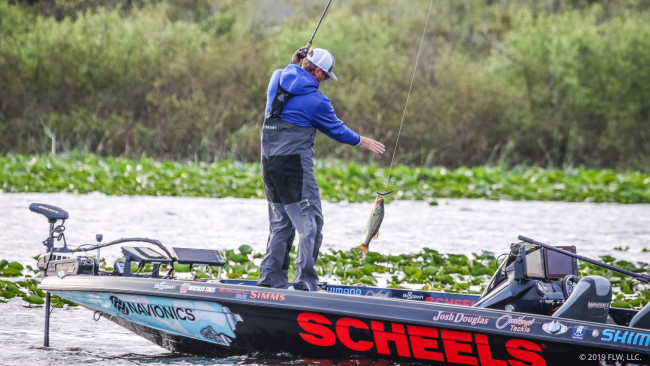 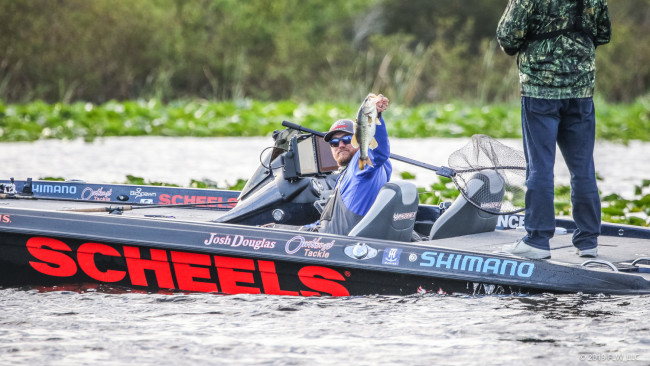 Scott Martin is off to a solid start after boat-flipping an estimated 4 1/2-pounder in Kissimmee. Currently, he is Power-Poled down and fan casting a moving bait over a grass flat.

Minnesota pro Josh Douglas has a small limit in his boat. He’s fishing an area with a lot of big fish, so it wouldn't be surprising to see him make huge culls as the day progresses.

Tommy Dickerson has been lighting it up this morning. So far, he has cashed in on a 6-pounder and some smaller fish to fill a roughly 15-pound limit. He’s throwing a lipless crankbait.

Aaron Britt hasn't found a big bite yet, but he knows he’s in an area that holds the big girls. The wind is the biggest conditional difference he has to deal with in the area he’s fishing. It will be interesting to see how Britt adjusts to get the big ones to bite. 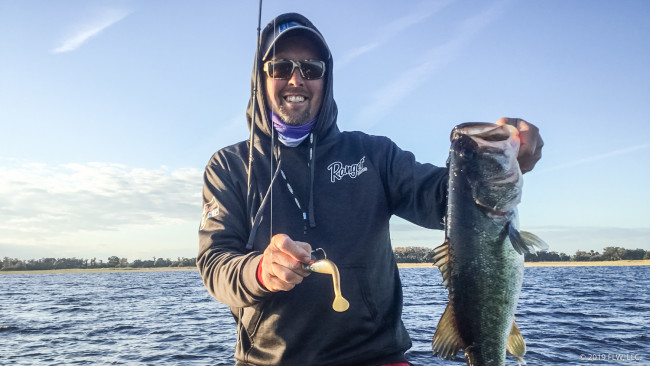 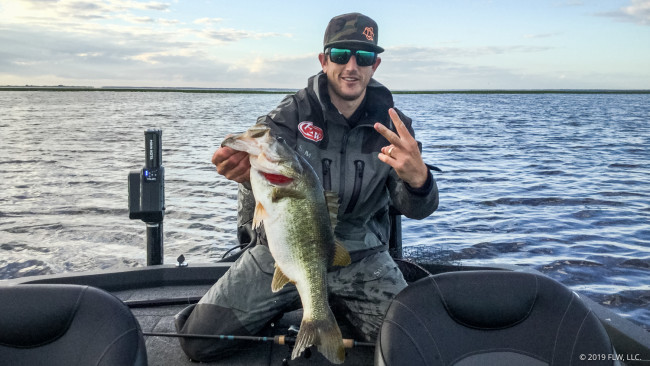 Water temperature continues to creep up into the mid- to high-60s. We’re seeing 67 degrees in some places. If that trend continues today, we’re going to see more and more big fish being caught from beds, although the wind and chop may take sight-fishing out of the equation in many cases.

David Dudley has joined Joseph Webster with an early limit. He has about 7 pounds. Ron Nelson has a couple small ones in the box and a handful of anglers have at least one, including a 3 1/2-pounder from Wade Strelic.

We have FLW Live cameras on the water today, so please be sure to also follow along at flwfishing.com starting in just a few minutes.

Joseph Webster sure likes to get off to hot starts. He has a limit of about 8 pounds in the box already with the largest about 2 1/2 pounds. There’s nothing quite like landing an early limit and having some freedom to go hawg hunting later on moving day.

The wind is blowing pretty hard right now, and while the water isn’t super rough at the moment, even a small amount of wind could really turn on the early bite today. Don’t be surprised if Webster isn’t the only angler to cook up a quick limit. 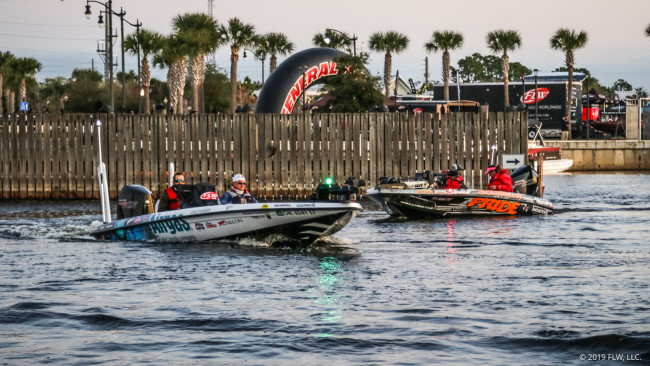 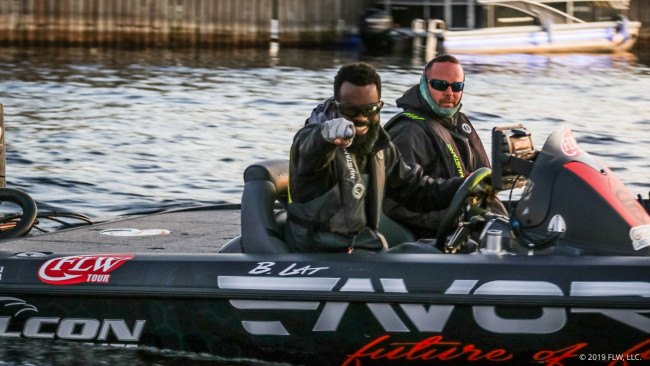 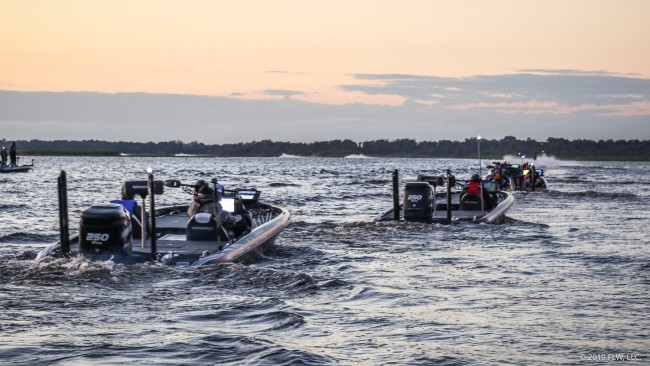 Day three promises a big change-up from the first two days of competition, both in the tournament field size – cut to the top 30 anglers today – and in the weather forecast. The first two days were warm, sunny and downright pleasant, but it didn’t necessarily help the fishing. Today, we can expect cooler weather (comparatively) with more wind and some rain in the afternoon.

Tournament leader John Cox (48-13) says he has a plan for the change. After sight-fishing clear water on days one and two, the shallow-water hammer is fully capable of making adjustments that still suit his style. If he can find some new fish this weekend, he’ll have a chance to put together another big bag and end up fishing on Sunday.

Aaron Britt turned in 24-2 yesterday to claim second place on the leaderboard. He and Braxton Setzer (third place, 23-5 on day two) look to hold off the always formidable Scott Martin, who starts the day in 4th place with 42-11 total.

We can make predictions for what we might see today, but the wind and rain moving in are almost sure to make day three entirely unpredictable. What we do know is that the Kissimmee Chain holds a slew of true giants. We’ve seen plenty at the weigh-in stage so far. We’ll probably see plenty more today.

Stay tuned for full live coverage on both the blog and FLW Live.