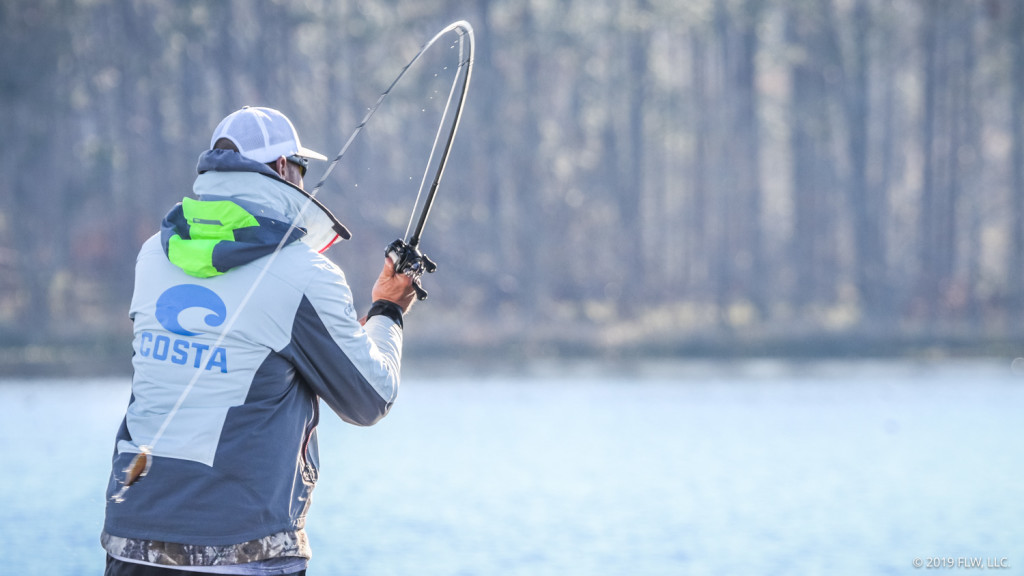 Greg Bohannan is definitely around some good fish as he has a pair of 4-pounders in his boat. A couple more of them would be clutch for the Arkansas pro. Jay Kendrick bumped into a beauty that weighs about 6 1/2 pounds. That fish pushed Kendrick’s limit to around 15 pounds.

In general, today was tough on a lot of the pros. The cold weather from the past few days and this morning has definitely slowed down the bite. Still, we know some pros found them, and big bags will in fact cross the stage today at Earle May Boat Basin in Bainbridge, Ga. Be sure to watch it all go down on flwfishing.com at 3 p.m. ET.

Thanks for following along! 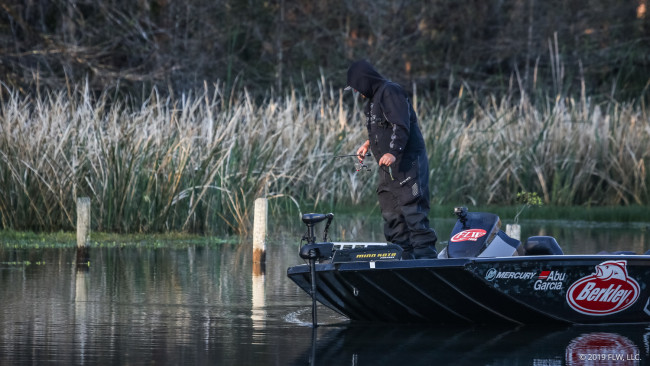 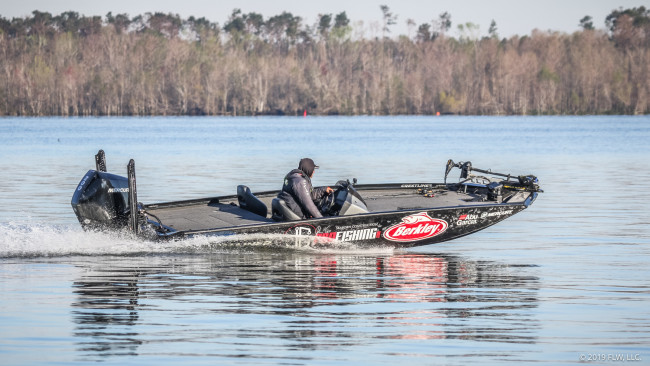 One of the best bed fisherman on the FLW Tour is having a tough time today. John Cox has barely mustered up three keepers thus far. If John is having a hard time catching them shallow, you can bet others are struggling near the bank too.

Well, the afternoon bite hasn’t quite kicked in yet. We have had a few reports of small culls here and there, but nothing too noteworthy. Josh Douglas has upgraded to 15 pounds. He is still anchored by his 5-pounder from earlier in the day. Scott Martin has a limit for about 15 1/2 pounds. He appears to be mixing it up between shallow-bank areas and offshore stuff.

The good news for those who are struggling is that they have a few more hours to figure things out. A limit worth 15 pounds is looking like it will go a real long way today on Lake Seminole, though there’s still some optimism for several 20-plus-pound stringers by the time weigh-in rolls around.

Sheldon Collings remains the frontrunner right now. He’s up to 23 or 24 pounds in his estimation. It’ll be tough to cull up without a monster fish, but we’re sure he doesn’t mind. He’s in good shape.

Sheldon Collings keeps laying it on. It was reported that he has upgraded to 24 pounds. Look for him to be way up the leaderboard this afternoon.

Alabama pro Ryan Salzman has a limit and just made his first cull. Now he has a stringer worth over 15 pounds.

It seems like a majority of the field is starting to hit a wall. We’re also getting numerous reports of more finesse-style baits being used, which is a sure sign the bite is getting tough.

One angler who is still catching good fish is Tennessee pro Jason Abram. He just bagged a 4-pounder. Abrams has been fishing the same area all morning. It appears he’s committed to whatever lives in the grass at his spot. Unofficially, we have him with over 16 pounds and sitting in fourth place on the leaderboard.

J Todd Tucker just replaced a dink with a 5-pounder. With that cull he should have over 15 pounds in the boat. That’ll have him sitting comfortably heading into the afternoon. 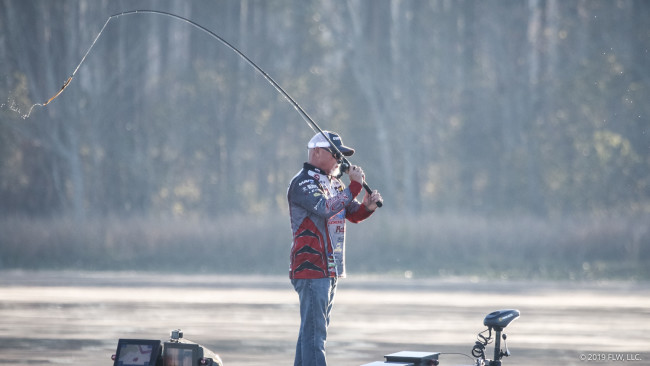 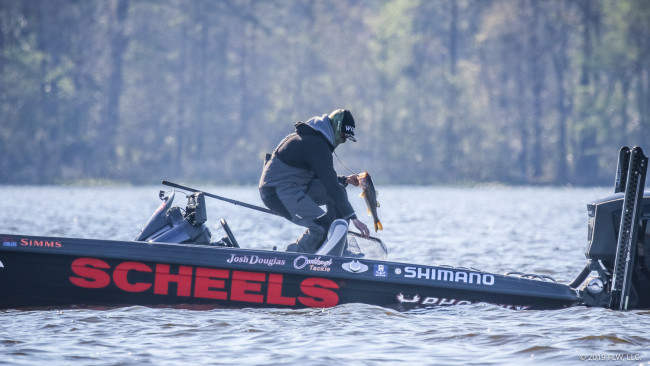 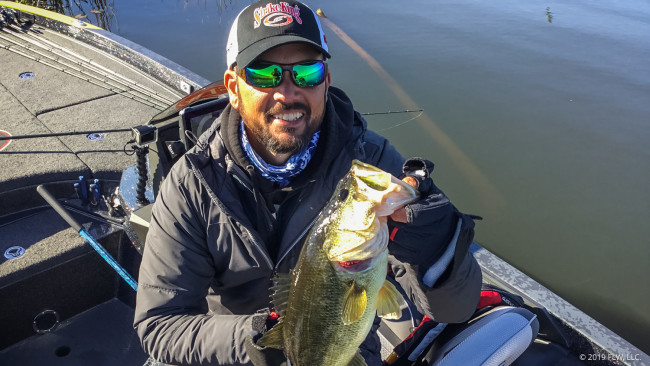 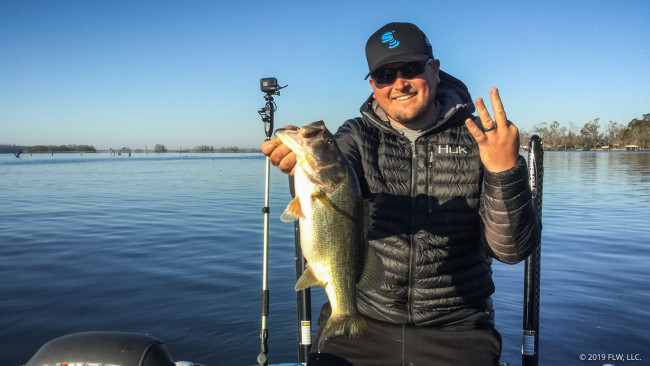 Bradford Beavers is sitting pretty after catching his 19 or so pounds earlier. He said he’s going to lay off his spot that produced most of his weight to save it for later.

In the Chattahoochee, Wes Logan finally got his first bite of the day — a 3-pounder. That fish should help get his confidence going.

James Niggemeyer and Miles Burghoff finished out their limits and are now looking to cull. Last time we checked on Josh Douglas he had a 5-pounder in the box that he caught while working offshore grass. Bill McDonald has a couple small keepers in his livewell as well.

We know of at least 15 limits right now and several fish over 5 pounds. Even though things have slowed a bit, there’s plenty going on out there. Considering the looks of the top of the leaderboard at the moment, it may take 25-plus pounds to claim the top spot on day one. 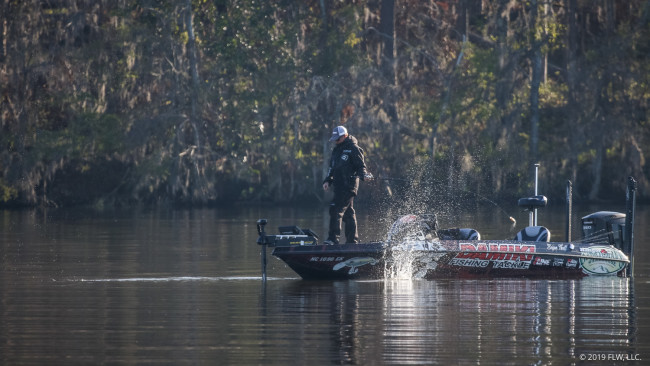 John Hunter just caught a 4-pounder and followed it up with a 3. That brings him up to around 9 pounds with just three fish in the boat.

FLW Tour rookie Corey Neece has 12 pounds total. His biggest fish at the moment is pushing 5 pounds. He’s fishing submerged grass in a highly pressured area in the Chattahoochee. Neece’s marshal says he is getting more bites and seems more dialed in than the other anglers in the area.

According to Bryan Thrift, he has a little limit for about 10 pounds.

So far the bed-fishing game has not been ideal. A lot of anglers who started on beds have now moved on. It’s looking like the recent cold weather has pushed the big ones off the beds and out to the deeper grass lines. That being said, as the weather warms up over the course of the week, we should see guys periodically check beds to see if anything moves back up on them. 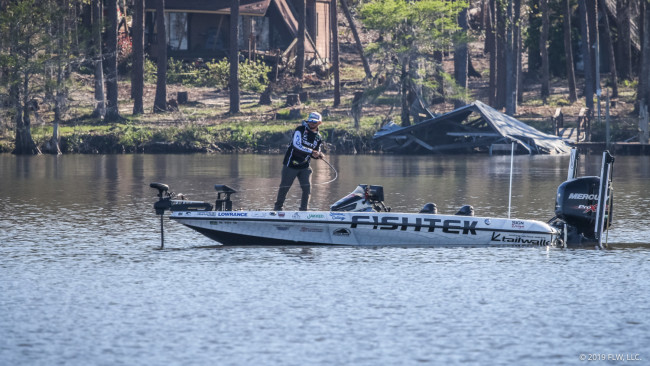 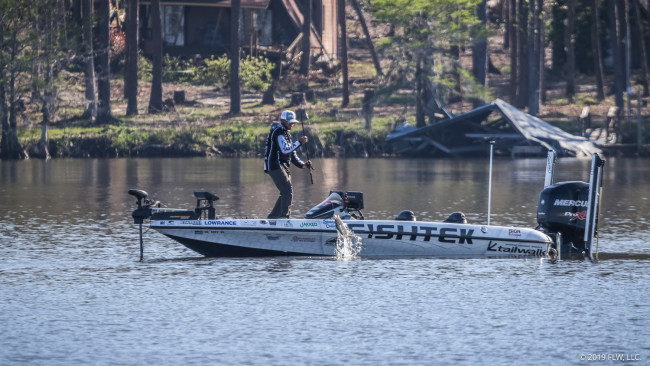 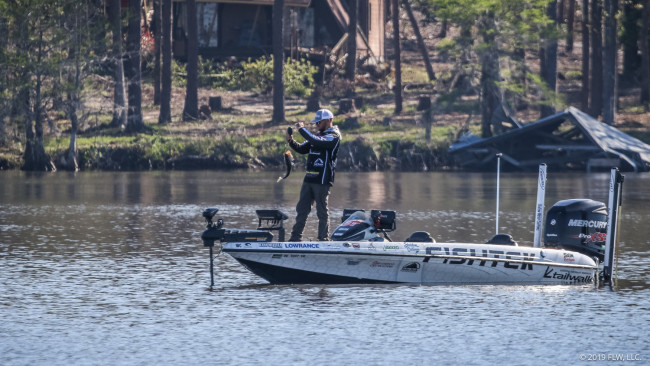 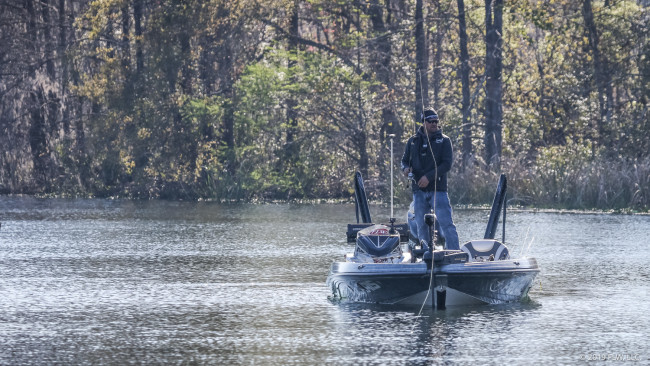 It looks like the vibrating jigs are being put to work by a few anglers at the moment. Most recently, Sheldon Collings just caught a 3-pounder on a vibrating jig, but it didn’t help cull. He said his scale has his limit at about 22 pounds and that he caught a fish on almost every cast for about 30 minutes earlier.

After starting the day out slow, Bradford Beavers is starting to get dialed in. Within the last hour or so the rookie has put upwards of 18 pounds in the box. Beavers’ marshal said his biggest fish is a 6-pounder.

David Dudley has picked off four small-bed fish so far this morning. He said, “Once I leave here, reality is going to set in.” Even with that mindset, you can’t ever count out Dudley to put together a strong limit of fish, especially when fishing is this good across the board today.

Brian Latimer is sitting in 4th place, unofficially. He’s been having a strong day to this point with about 15 pounds. His biggest is about 5 pounds, so there’s still plenty of room for culling. 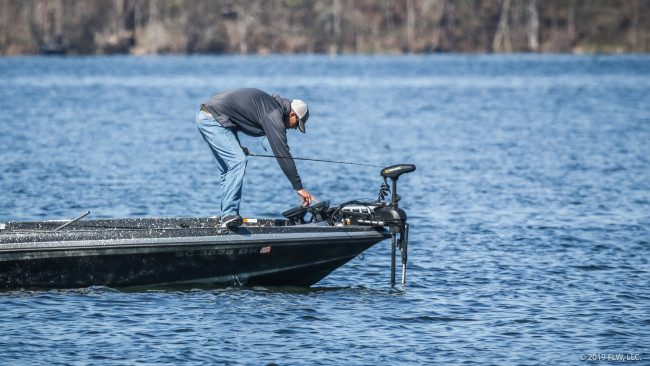 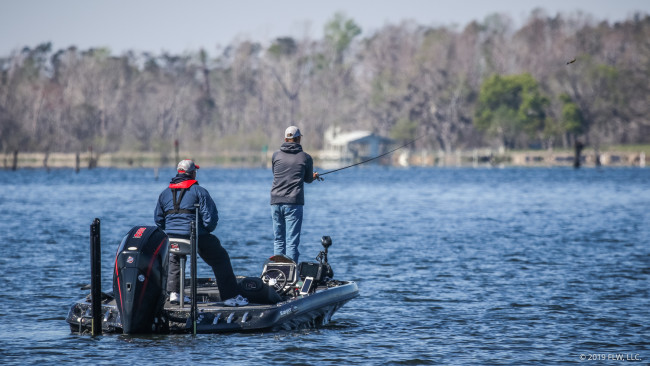 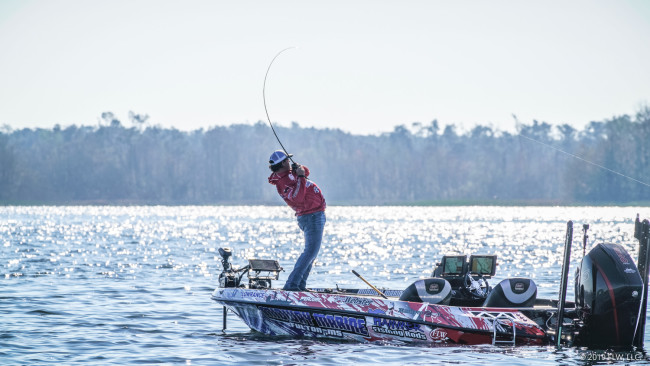 Along with the air temperature, the bite is slowly heating up for everyone on Lake Seminole. We’re getting reports all across the lake of anglers catching solid keepers and limits. One of the more consistent baits observed so far have been lipless crankbaits. However, there isn't a distinct pattern that is proving to be the deal yet. There’s plenty of flipping going on and even a little spinnerbait bite.

Sheldon Collings has a report of 21 pounds in his livewell and he seems content with it. When we asked about how his day is going he replied, “Can I just weigh in now?”

It looks like Joseph Webster is keeping his momentum going as he has a limit worth about 17 pounds. Bradford Beavers also has a nice limit of about 16 1/2 pounds.

Seminole was tough during practice, but the weather seems to be giving these guys a break. It’s going to be a good day to be a pro on this lake.

The first biggun of the morning was just caught by Evan Barnes. The Arkansas pro is estimating the fish to be at least 7 pounds.

Billy McCaghren has a school fired up at the moment. His marshal is reporting that McCaghren is catching fish nearly every other cast. The only issue is that his largest fish is 2 1/2 pounds. Still, that leaves a lot of room to cull up.

Brian Latimer is already working on a decent bag. Right now, he has roughly 14 or so pounds in the box, which includes a 5-pounder.

We have reports the Joseph Webster also has a limit and is working on some culls. We’re not sure on his total weight but we will get more info shortly. 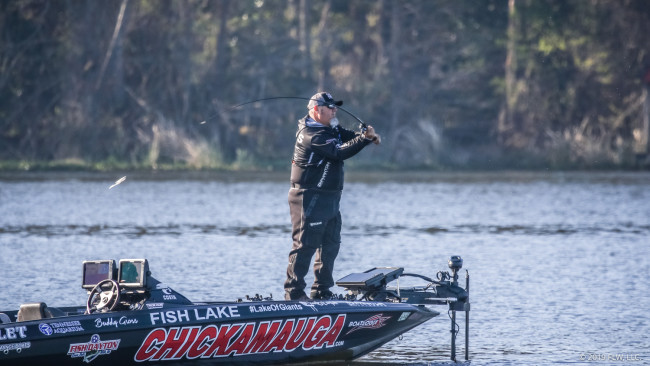 Lake Toho winner Buddy Gross is having some technical issues to start the day. His trolling motor isn’t working, but his marshal reports that Gross is getting it taken care of. He should be up and running soon.

Ryan Salzman, on the other hand, has a perfectly functioning boat. He used it to help tow a couple locals whose boat broke down as Salzman was coming through after takeoff. Might be a little good karma for the Alabama pro, as he just landed a 5-pounder.

Speaking of big fish, Eric Jackson also boated one just recently. His marshal reports a 6-pounder for the Tennessee pro. 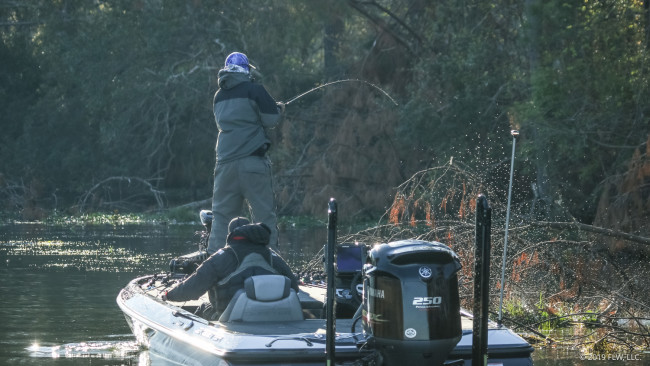 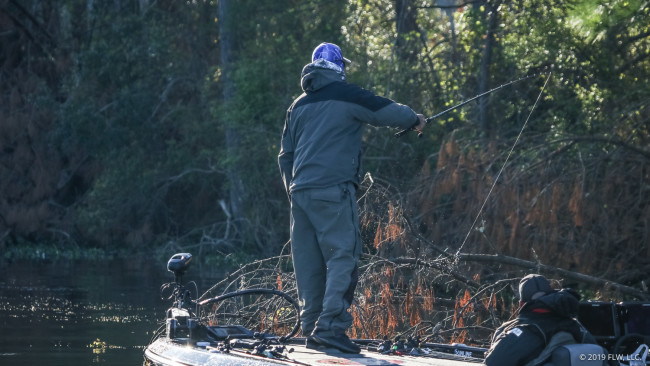 Dense fog slowed takeoff this morning and forced many pros to set up shop short of their target starting spots until it clears. As a result, reports of fish catches are few and far between so far, although Nick LeBrun does have a reported 4-pounder in the box. Tyler Stewart also has a 3 1/2-pounder, which he caught punching some mats.

It's a long run for a lot of pros to make their first spots. Now that they're starting to settle in, it should be a good morning for some quality and quantity in equal measure. 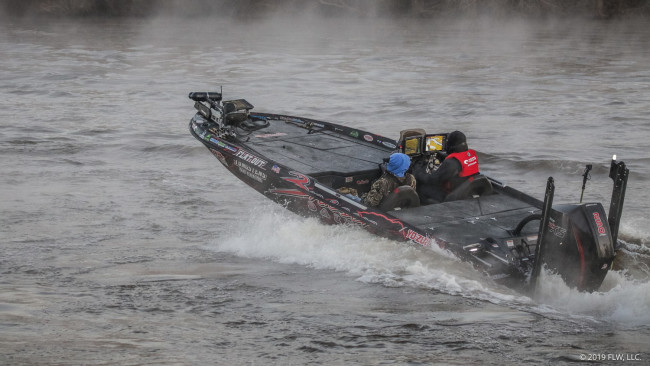 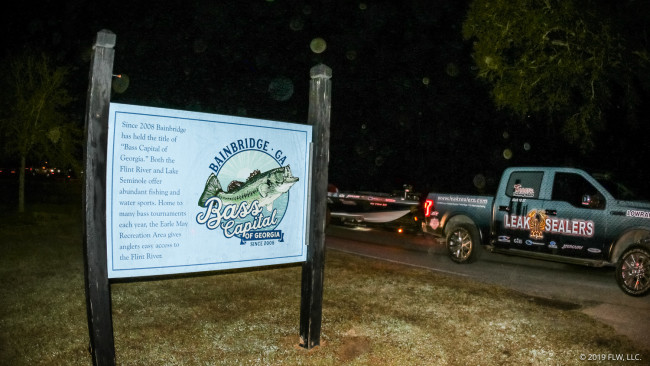 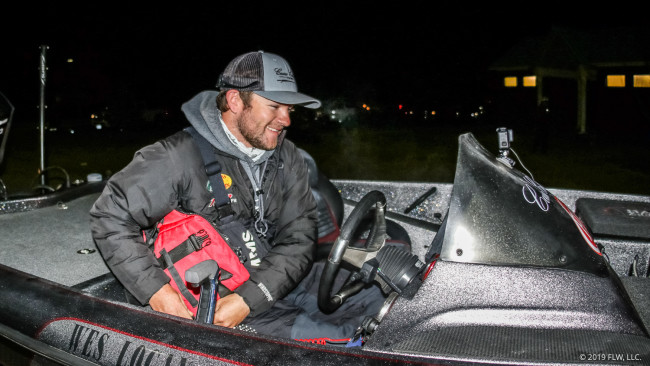 The FLW Tour hasn’t made its way to Lake Seminole in quite some time, but after a few days of practice for the 170-angler field and a slight warming trend moving into the area, it’s a good bet pros are going to get on ‘em early and often in the third event of the year, presented by Costa.

It’s a cold morning in Bainbridge. The temperature is hovering in the mid-30s at takeoff. It’s supposed to warm up, though, with forecasted highs in the mid- to high-60s with sunny skies all day. After a recent cold front moved through and stuck around, a little warmth and sunshine will be welcomed by anglers and big bass alike.

Hurricane Michael rolled through last fall and did a number on Seminole, changing the topography, structure, cover and various grasses of the lake. Even for anglers who have fished Seminole before, this is a whole new ballgame. Still, Seminole is a fantastic lake full of big bass, and there’s no reason to believe it’ll take anything less than 20-plus pounds per day to make some noise this weekend.

It all starts right now. We’ll have full coverage of the action all day today with FLW Live coverage of weigh-ins to follow, starting at 2:30 p.m. ET.

FLW Expo: 2 p.m. ET through the end of weigh-in at Bainbridge Earle May Boat Basin