Boutries and Hallman are neck-and-neck 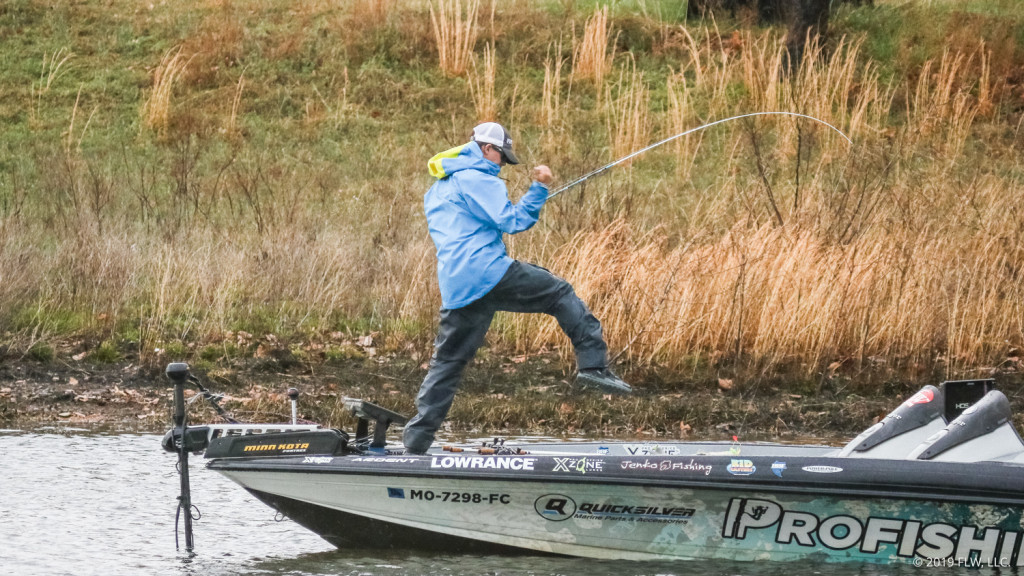 Weights on the leaderboard are estimates provided by FLW Marshals and media staff. They are not official. FLW will no longer update it after 1:30 p.m. CT. Weigh-in begins at 3 p.m.

Jamie Horton has quietly put together a strong day. He just caught a 5-pound kicker, which could potentially land him on FLW Live tomorrow morning. John Cox is fishing backwaters with a vibrating jig and has put about 13 pounds in the boat.

Currently, Bailey Boutries and Bradley Hallman are basically tied for first place. Not far behind are Lawyer, Bolton, Horton and Latimer, who all have climbed their way up the leaderboard. Still, we can’t forget that Weisenburger, McCaghren, Beavers and Burghoff have a lot of room left in their livewells. A late-day push could have any of them in the lead.

As far as weather goes, the majority of the rain has moved on from the lake, but we could still see a few showers here and there. The wind has picked up big time on the lake and is making running around difficult. Looking at tomorrow, we’re set to see some colder weather and more wind hit the area – just another obstacle for the anglers to battle through.

Thanks for tuning in to the blog and FLW Live Leaderboard today. Be sure to swing back to flwfishing.com at 3 p.m. CT to watch the live weigh-in.

Bradley Hallman’s marshal reported that the Oklahoma pro has been steadily catching them throughout the rain. He just culled up to nearly 17 pounds and is neck-and-neck with Boutries atop the leaderboard. Boutries is playing a little defense at the moment. He apparently is catching most of his weight on a specific stretch of grass near the bank that he doesn't want anyone else to touch.

Josh Douglas just boated fish No. 4, which happened to be a 4-pounder. The day-one leader Kyle Weisenburger finally boated his second fish. Luckily for him, he is only a few pounds out of the lead thanks to his giant day-one bag. With how the top of the unofficial leaderboard is shaking out, the rest of the tournament should be super tight.

Jeremy Lawyer hasn’t caught the most fish today, but every fish he catches is solid. We have him unofficially at 18 pounds and sitting in second place. Jon Canada also made a big jump up the leaderboard today, largely due in part to a 6-1/2 pound kicker he just caught. Larry Nixon duplicated his total weight from yesterday by adding another 12 pounds to his livewell.

Apparently the rain hasn’t been entirely bad for fishing on Grand. We’ve actually seen the most big fish of the entire tournament in the last hour or so. These big kickers can sure make a difference with how hard fish are to come by right now.

Brandon McMillan and Andy Young each just landed 6-pound Grand Lake slobs. That’s B. Mac’s first big bite of the tournament, and it brings his weight up to about 12 pounds on the day. AOY leader Terry Bolton just completed his limit and is now upward of 14 pounds on the day. It’s looking like he’ll hang on to the season point lead this week unless something wild happens. There’s a fairly stout downpour on the water right now with some thunder mixed in. We’re seeing a few anglers take cover for the time being. 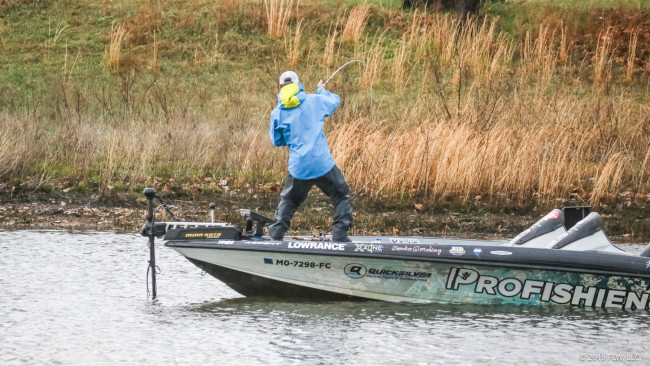 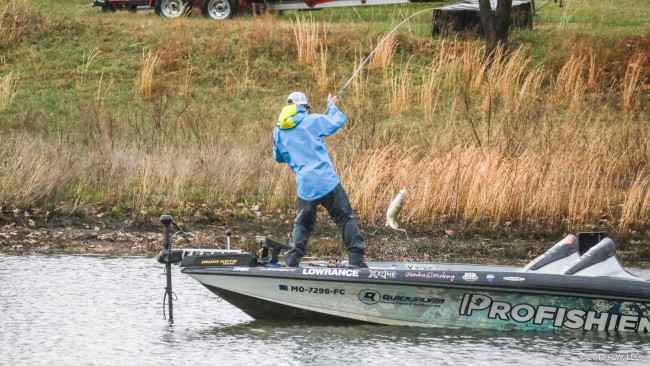 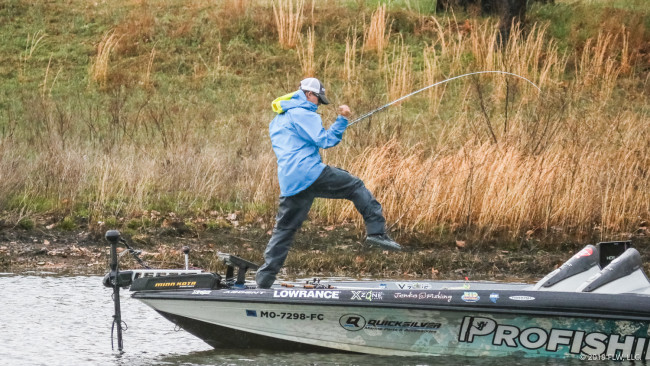 After making a few culls, Bailey Boutries has himself the unofficial lead. Like a ton of pros, he is fishing docks. Sheldon Collings just caught the rest of his limit. Time to upgrade for the Oklahoma pro. AOY leader Terry Bolton has four keepers in the boat and is now in the top five on the leaderboard (read more about Bolton’s AOY season here). As far as the weather goes, the rain is still coming down out on Grand and doesn't show much sign of backing off for at least an hour or so.

John Hunter is making his case to go fishing on day three. The Kentucky pro has bagged over 15 pounds worth of bass so far today. It sounds like he is chucking and winding a blade around. Tyler Stewart and Bailey Boutries are both having solid days too as they have mustered up a couple 10-pound bags. Other than a few short fish, everyone else has been fairly quiet since the rain hit. 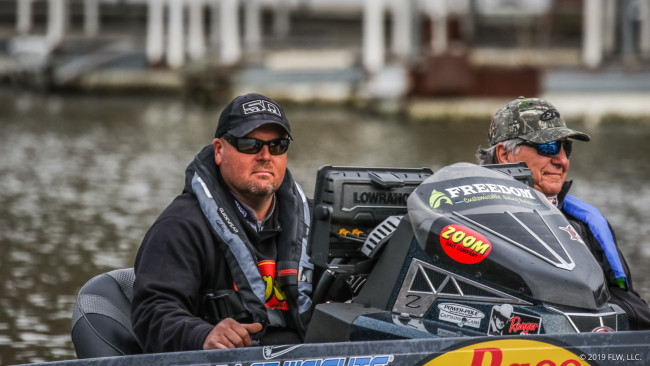 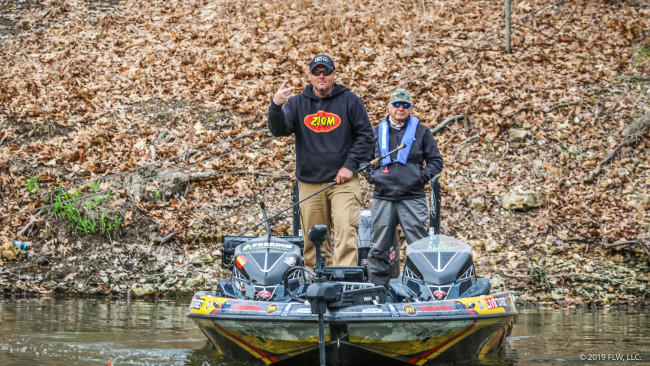 The rain suits are being busted out as the rain is officially starting to hit the western end of Grand Lake. We are still getting reports of decent fish being caught. Most recently, Jeremy Lawyer and Terry Bolton cashed in on solid keepers. B. Lat is still grinding away on the bank with no upgrades to show. Scott Martin also cracked the ice and caught his first keeper.

Meanwhile, a bunch of guys are already in full-scramble mode today. Brad Knight, Todd Castledine and a bunch of others are making long runs just looking for a keeper bite. Our day-one leader Kyle Weisenburger is also looking to get something going. His juice spot definitely hasn’t lived up to yesterday’s showing, so he may need to find something else to work off of today. 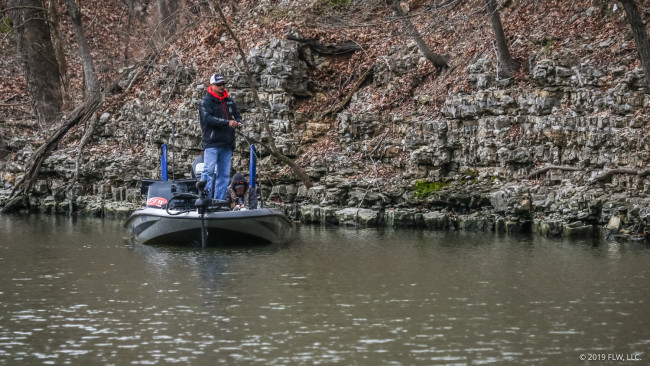 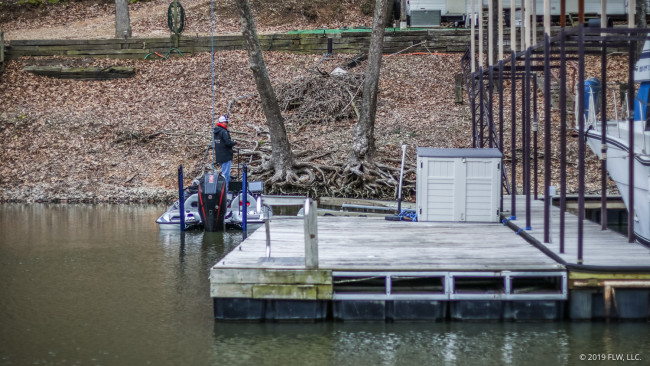 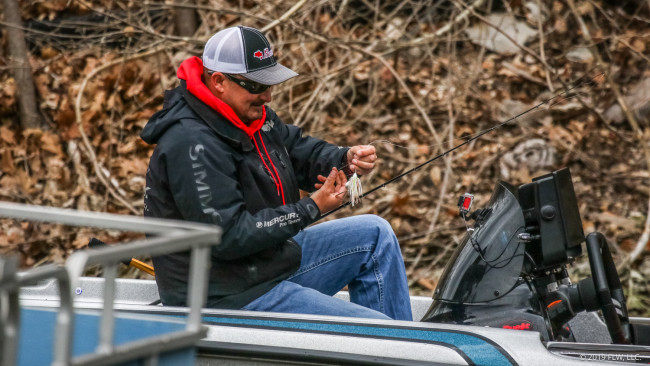 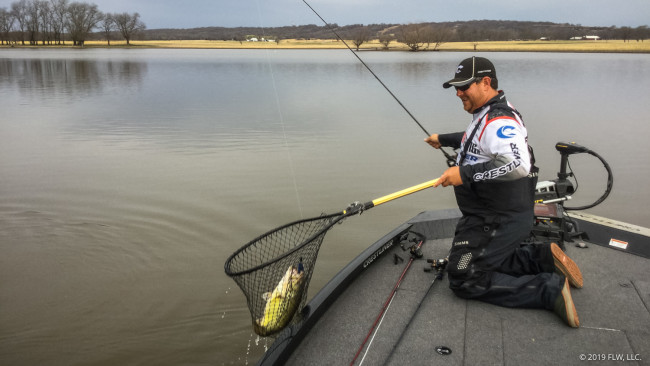 We just had a small influx of quality fish caught. John Cox and Aaron Britt both bagged 4-pounders, while Joseph Webster and Bradford Beavers each bagged a 3 1/2-pounder. Aside from those fish, it seems like the bite is slightly picking up for others in the field too. Josh Douglas, Jimmy Houston and Tyler Woolcott all reported a few keepers caught recently. Most of the damage is being done with spinnerbaits on the bank.

Billy McCaghren is having a more difficult time than he anticipated this morning. He says his spots aren’t reloading like he’d hoped for. We’re also seeing a few more anglers fishing the same areas as Billy. 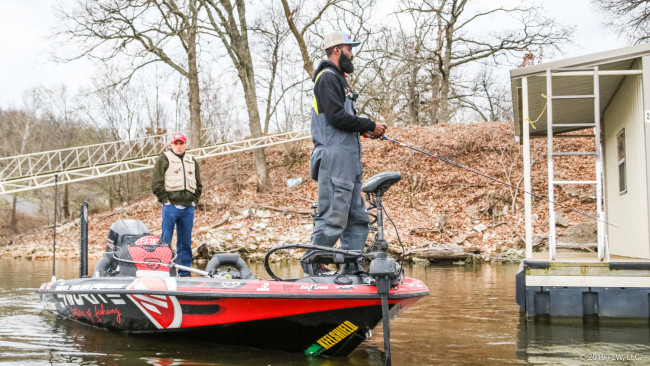 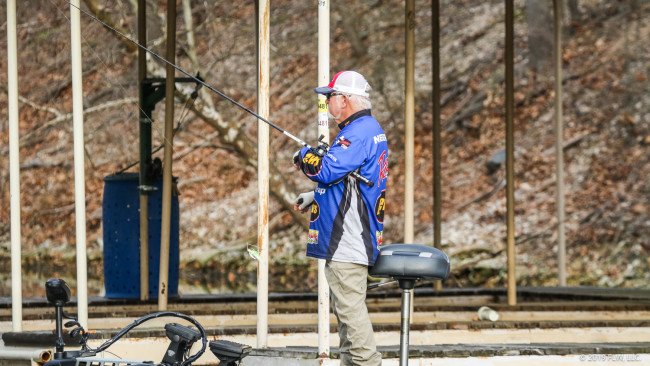 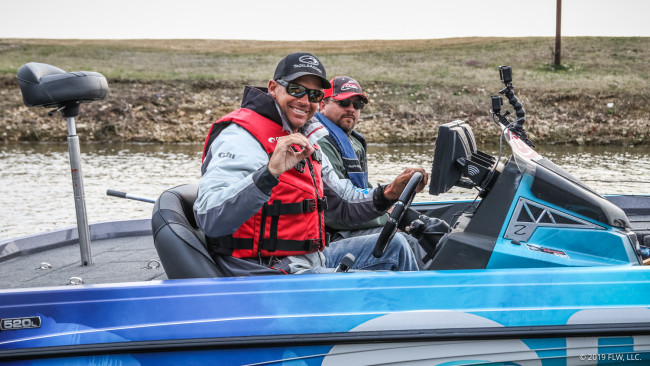 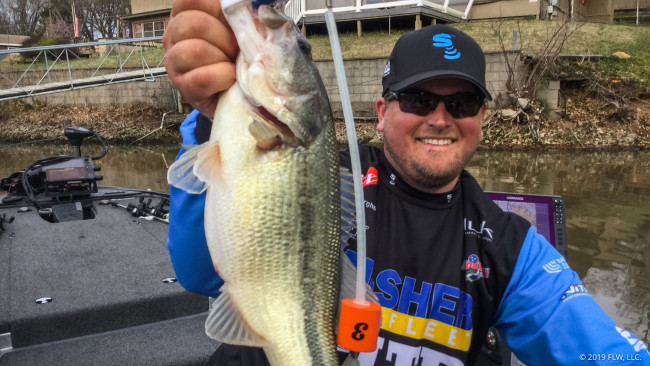 Brian Latimer’s marshal just reported that the South Carolina pro has between 17 and 18 pounds in the livewell. We aren't quite sure how he is fishing, but we do know he is catching a good amount of fish. Apparently he has already culled a few times. We will keep a close eye on him the rest of the day.

Elsewhere, Miles Burghoff was able to put his first fish in the boat. He is working shallow cover – a common Grand Lake theme. Jeremy Lawyer just stuck a 4-pounder, which was his second fish of the morning.

Texas pros Dicky Newberry and Todd Castledine have struck out at their first spots. Dicky says the water dropping may have pushed his fish to the deeper end of the cuts he is fishing.

The biggest story so far could be the storms that are rolling into the area. Our reporters say there are some gnarly clouds are on their way in from the west. According to the local weather channels, we will be in on-and-off severe storm warnings for the majority of the morning. 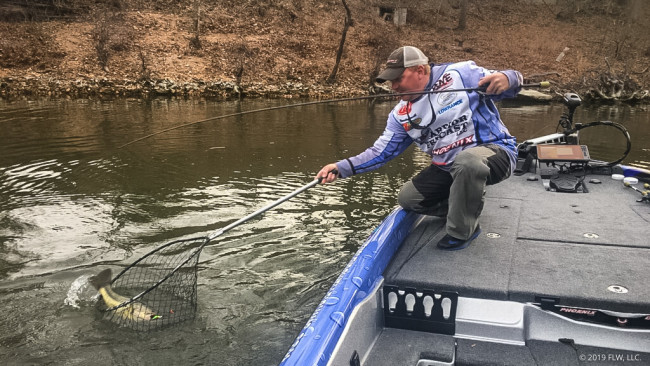 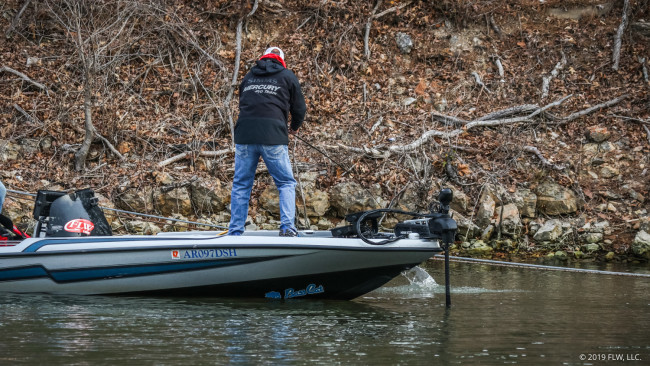 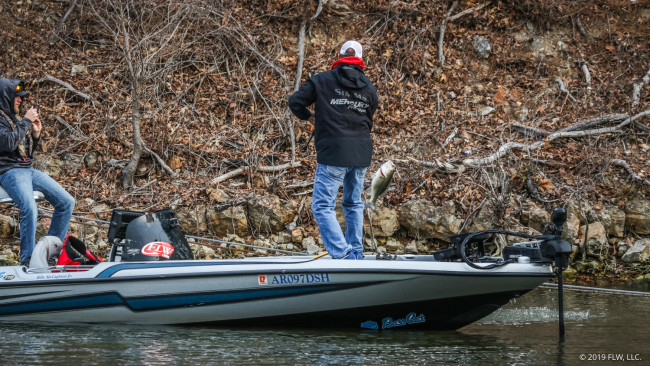 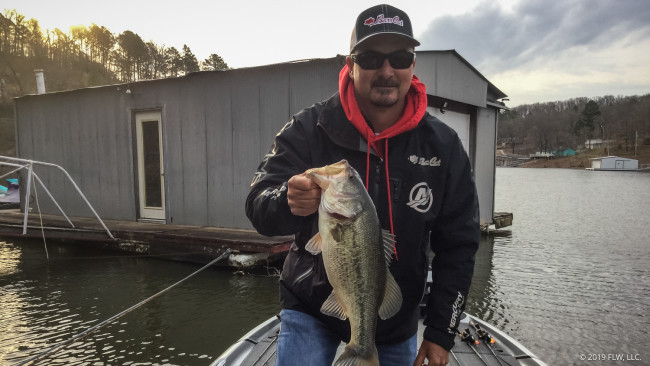 Hensley Powell has the big fish of the day after landing a 4-pounder. He is working a few cuts and small pockets on the south end of the lake. Billy McCaghren just caught his first fish of the day – a 3-pounder. He had the fish doing acrobatics over a dock cable to get it in the boat.

Local pro Sheldon Collings has three fish in the box for about 4 pounds. Even though his weight is low, this is a lot better start than he had on day one. Yesterday, he mentioned that he was fishing a lot of history. Perhaps he has moved off of that strategy and is figuring out some newer patterns.

We are also getting reports that the water has dropped a fair amount since yesterday. Match the falling water with potential storms rolling in this afternoon from the west, and we are in for an interesting day. 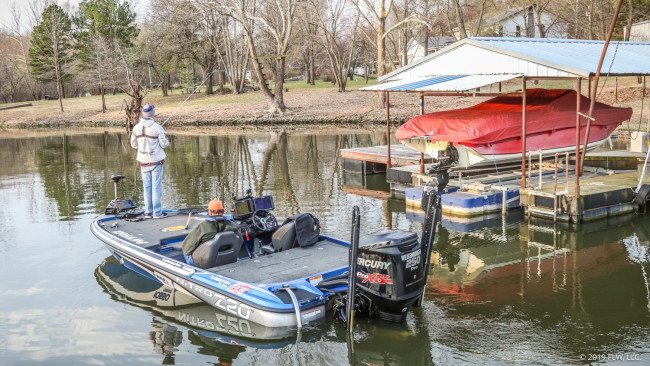 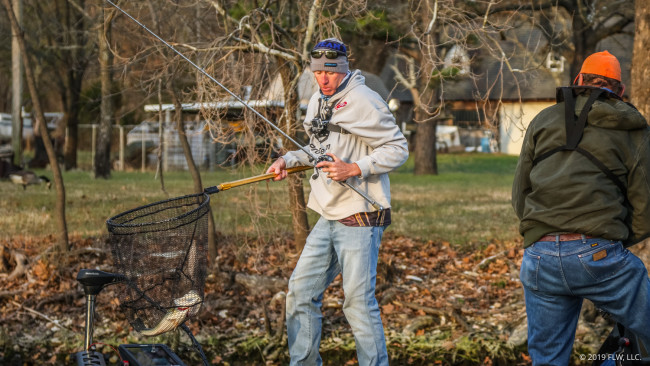 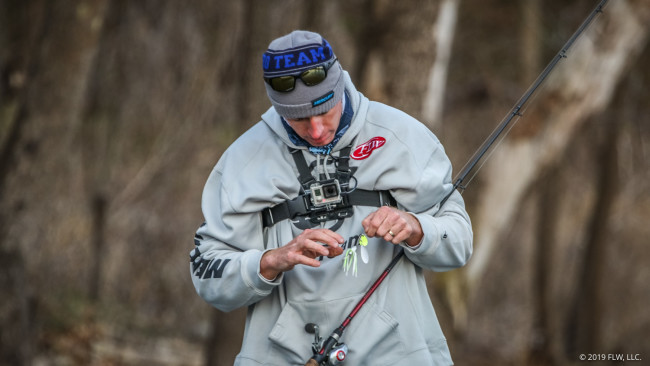 8:00 – Weisenburger on the board, Latimer starting quick

Kyle Weisenburger has a creature bait in his hand and is flipping this morning. He has a little more company in his area than yesterday, but perhaps no one is as dialed in as him. Kyle says he didn't sleep at all last night. He was too excited to get back out there and not only chase his first FLW Tour top 10, but his first win.

Brian Latimer, winner of the Lake Seminole tournament a few weeks ago, racked up a trio of keepers right off the bat this morning. He has the hottest hand thus far today. 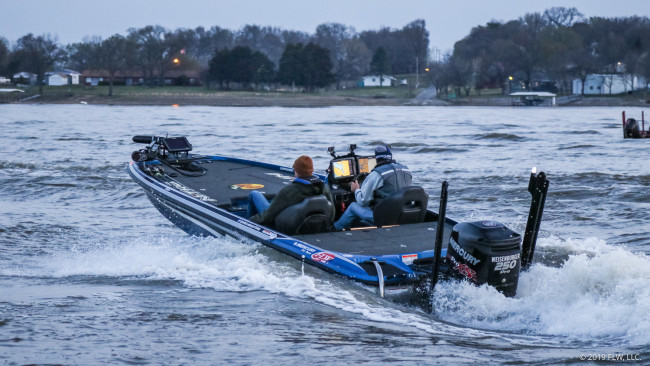 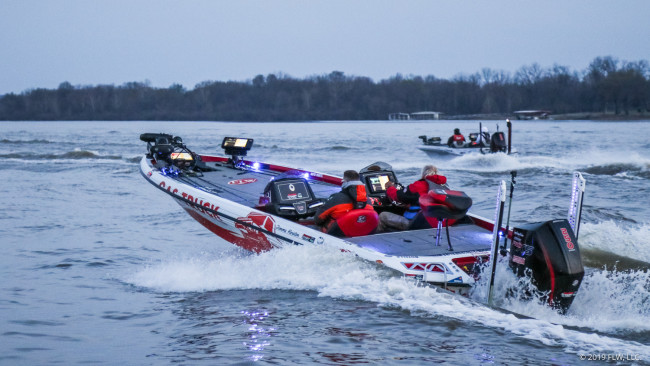 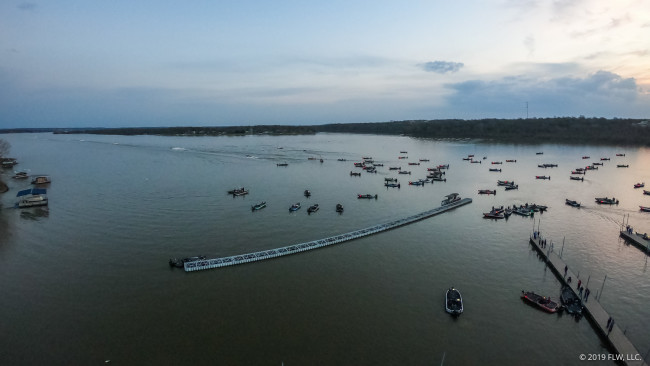 Nothing came easy for most of the pros at Grand Lake on day one. The lone exception was Kyle Weisenburger, who hammered out more than 24 pounds, catching most of it early from one particular area. Todd Castledine also broke 20 pounds, and several others topped 19, but none of them cruised in as smoothly as Weisenburger. The Ohio pro eased off his fish by lunchtime, and today we'll get to see if he saved enough to carry his lead into the weekend.

The weather is going to be a factor today. Yesterday afternoon, southerly winds built to the point that Grand Lake got pretty rough. It's supposed to blow out of the south again today, though maybe a little lighter, and there's a 40 percent chance of rain with scattered thunderstorms possible.

Creature comforts might suffer, but the reaction bite that's carried most of the top pros should be lit. Spinnerbaits were the main player yesterday, with jigs, crankbaits and vibrating jigs also getting a lot of play. It's classic Oklahoma fishing, and right now, a pro from Ohio is way in front.