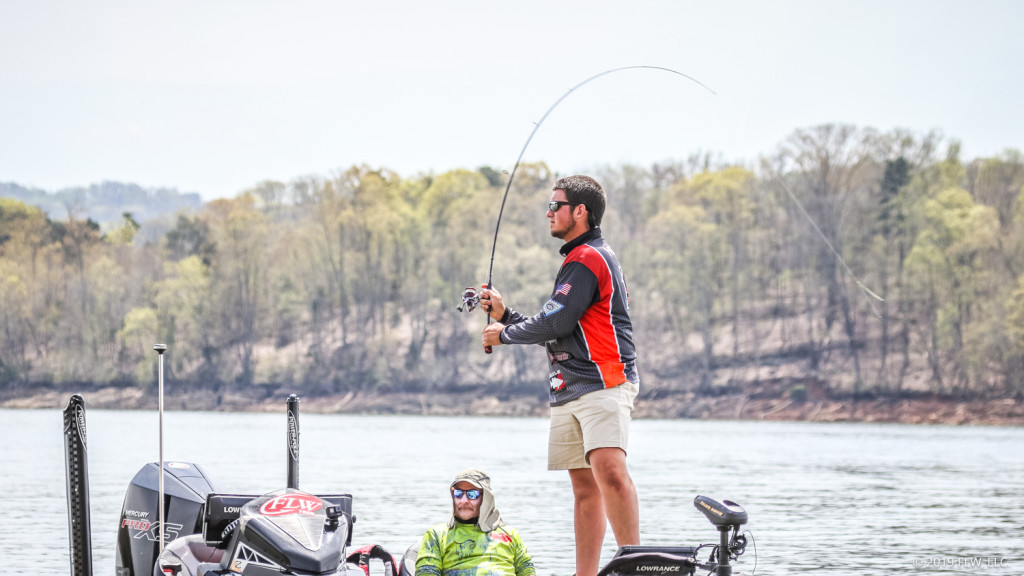 Marty Lawrence has quietly had a strong day on Cherokee. He has been steadily making culls and now finds himself with over 16 pounds in the box and sitting in third place.

If there’s one thing we’ve learned about Cherokee Lake, it's that the lake is plump full of fish that are willing to bite. Today has certainly exceeded expectations as far as the action goes.  Everyone is doing an alright job of finding 2-pounders, but at the end of the day, the 3- to 4-pounders are the fish that these guys need. We’re closing down the blog and leaderboard now, but can confidently say a lot will happen between now and weigh-in.

Be sure to watch weigh-in at 3 p.m. ET on flwfishing.com.

Darrel Robertson’s marshal reported the Oklahoma pro catching a 5-pounder. That would be the first fish over five pounds that we have heard of. It was also a largemouth.

Scott Martin caught a four-pound smallmouth to cull out his only largemouth. Now Scott’s limit is up over 16 pounds. Unless something crazy happens Scott should be in the top 10 at the end of the day.

Billy McCaghren has a limit and is now culling his smallest keepers with more tiny keepers. His marshal said, “We’ve reached that point where every fish has gone on a low-carbohydrate diet.”

Oklahoma’s Chad Warren is lending a helping hand to Brandon Mosley, who’s boat is broken down. It sounds like Chad is content with the 14 pounds he has in his livewell and is basically going to focus on helping Mosley, rather than keep fishing. Talk about a testament of sportsmanship by Warren.

Bryan Schmitt is all about green fish today. He might be the only pro who we has a limit that doesn’t include at least one smallmouth. Unfortunately, his largemouth aren’t exactly giants. We have him at 11 pounds, but he could easily hook into a few bigger largies to gain some weight.

Other than Upshaw and Snavely, the top 10 is pretty tight. Nobody can afford to weigh in any less than five fish per day in this tournament. The weights are just way to close right now. 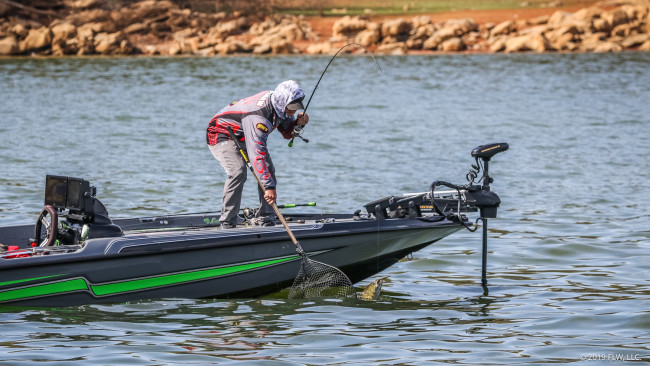 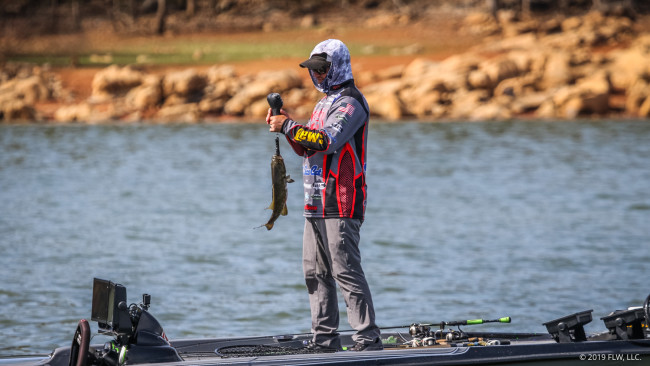 Out of the top 50 pros on the FLW Live Leaderboard, 46 have their five-fish limit. 2-pound smallmouth are common among those limits. We are getting word of anglers leaving their limit spots to find kicker largemouth.

Andrew Upshaw is still catching nice fish, but none of them are good enough to cull. We just watched him catch and throw back a 3-pounder. It could be difficult for him to improve his bag much the rest of the day. Derrick Snavely hasn’t improved his 17-pound limit for awhile either. It seems like the 17-pound mark is going to be a really solid weight on the day. 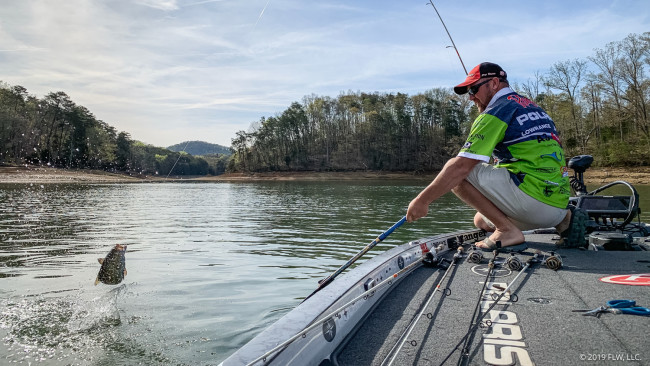 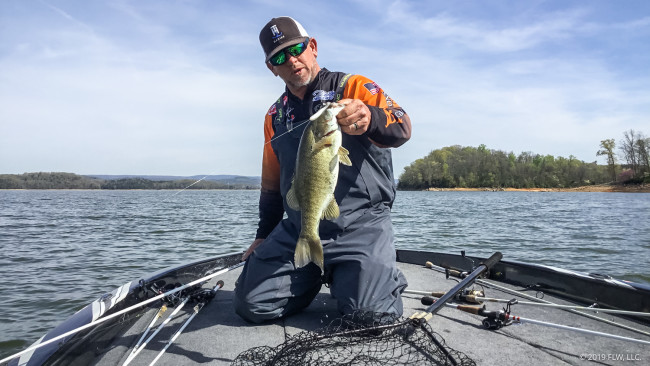 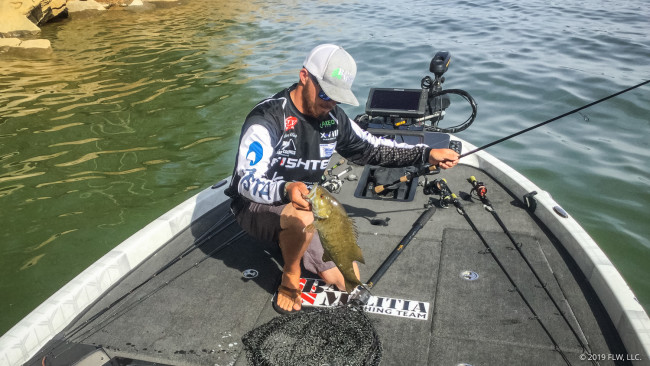 Normally we start to see a midday lull kick in this time of day. However, we've had anything but that here at Cherokee. If you have paid close attention to the FLW Live Leaderboard, you probably have noticed the fish catches have been steady all morning and show no signs of stopping. Cherokee Lake is fishing awesome, to say the least.

Pretty much anything you could ever throw on a spinning rod is coming into play as Cherokee’s smallmouths don’t seem too picky, especially if they’re around a bed. A bunch of anglers seem to be hitting the same rock banks looking for spawners. It will be interesting to see if that pattern can sustain past today. 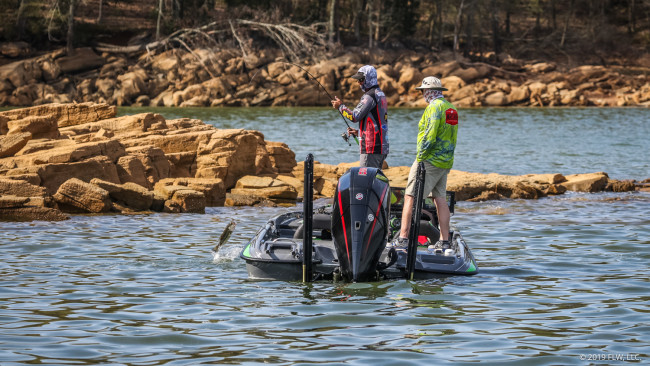 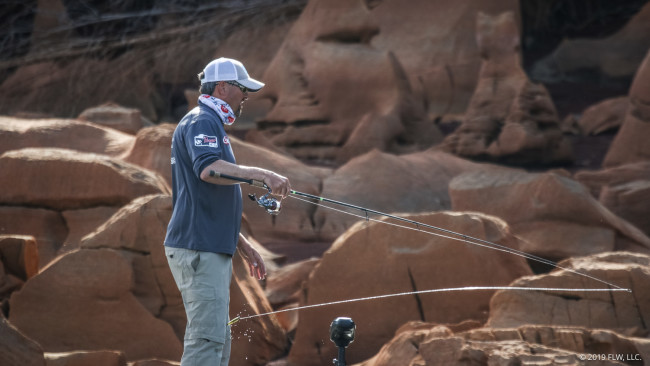 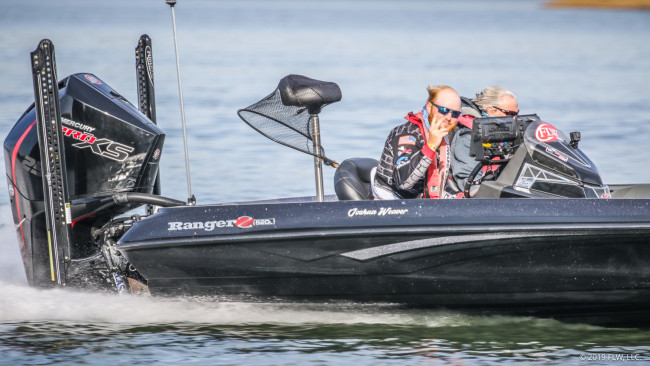 Yesterday at the pre-tournament marshal meeting Andrew Upshaw stated, “I fish to win. I think I am going to win this thing.” Right now, it looks like he wasn’t joking around about what he told the marshals. Upshaw's marshal just reported that the Oklahoma pro has a mixed bag that weighs about 18 pounds. That’s good enough to have Andrew in the unofficial lead.

Kyle Cortiana edged a spot in the unofficial top 10. He has a limit worth 13 1/2, which includes a stout largemouth. Ron Nelson also has himself toward the top of the leaderboard. He was last seen with a spinning rod in hand, potentially looking for spawning smallmouths. One of our on-the-water reporters mentioned how he hasn’t seen a single casting rod at all today.

We pulled up on Josh Weaver to find out he has a 10 1/2-pound limit. He said, “I’m surprised I have a limit. My bite’s been after 11.” If that statement holds true, we're pretty much in for an all-day bite here at Cherokee Lake. 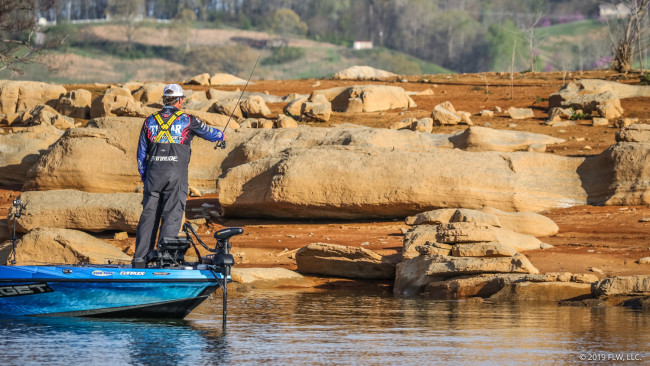 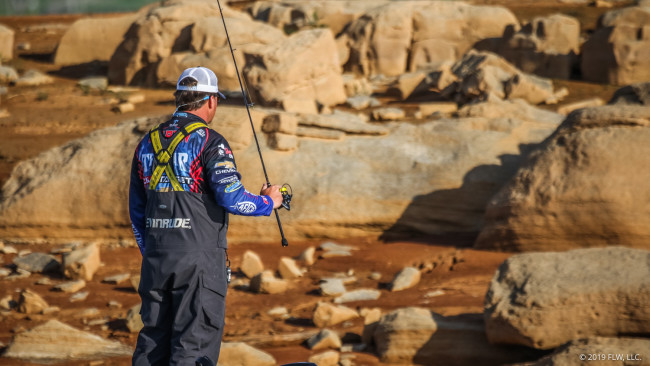 We had a flurry of updates come in from Tim Cales’ marshal. The pro looks to be working on a mixed bag that weighs about 14 or so pounds. Andrew Upshaw and Scott Martin are still catching them. They both made small culls to improve their limits to around 13 pounds. Tim Frederick is also on the cull train. His last upgrade has him up to 13 pounds.

It looks like a few guys are starting to target bedded fish. Being that today is the first day of the tournament and a good day for weather, it’s not a surprise to see anglers sight-fish. We should see more of that go on as the day progresses. 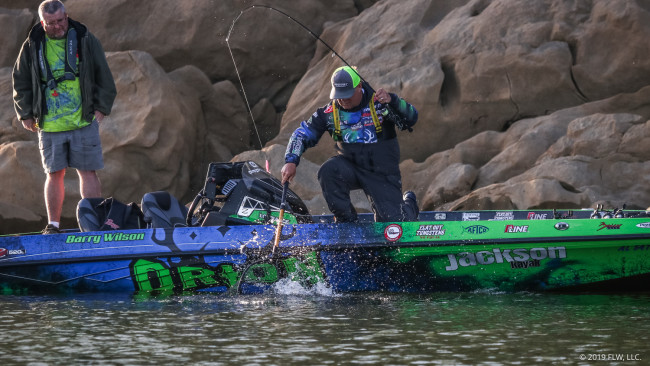 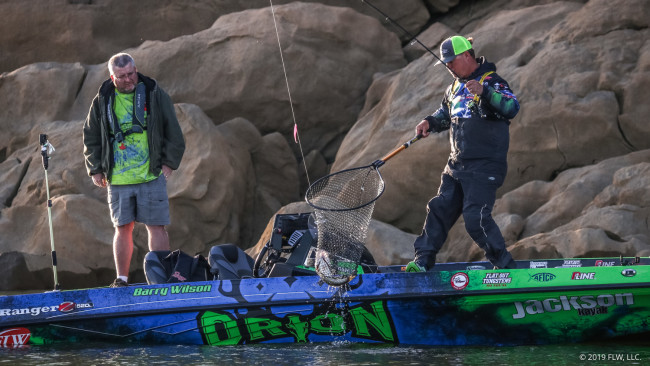 You’d think we are at Lake St. Clair with the amount of fish catches rolling in. Most of the fish being reported are 1 1/2- to 2-pounders, but some guys are finding better ones upward of 4 pounds. The majority of the reported fish are smallies, but we have seen a good amount of largemouths caught this morning too. No patterns are really sticking out as the best since so many guys are catching them. If this bite keeps up we will see a ton of limits hit the scale this afternoon.

Here’s a breakdown of the top 10 on the FLW Live Leaderboard. As you can see, it hasn’t taken long for most of them to put five keepers in the boat. 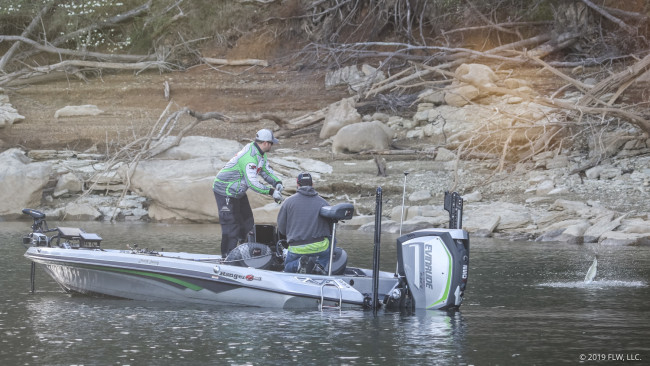 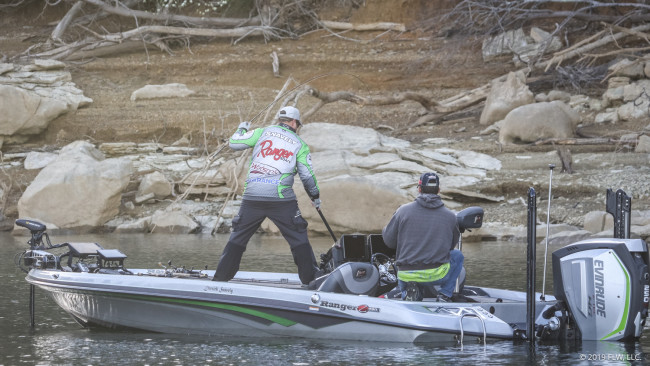 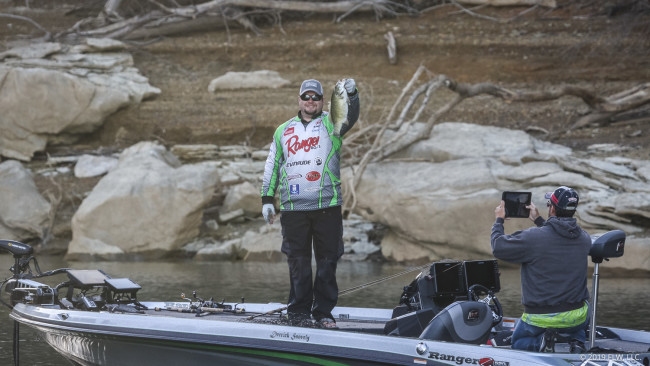 It didn't take Tennessean Derrick Snavely long to land a limit of chunky Cherokee smallmouth bass. The regional stick has already made a nice cull too. He has 12 to 13 pounds. Only a pound or so behind him is AOY contender Scott Martin, who has won smallmouth tournaments several times in his career.

There's a mix of patterns working right now. The most popular seem to be running the bank with spinnerbaits and other moving baits or slinging swimbaits. Some pros are fishing slower with soft jerkbaits and other plastics. 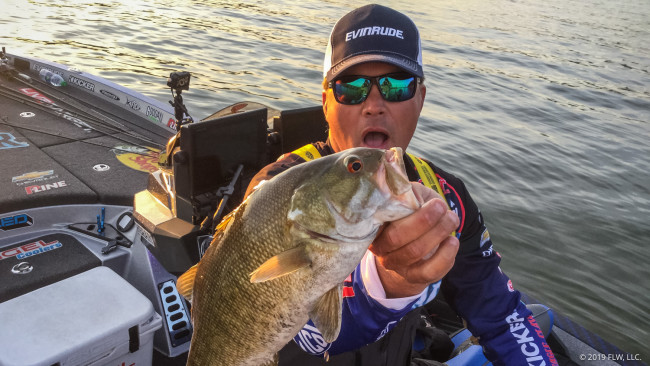 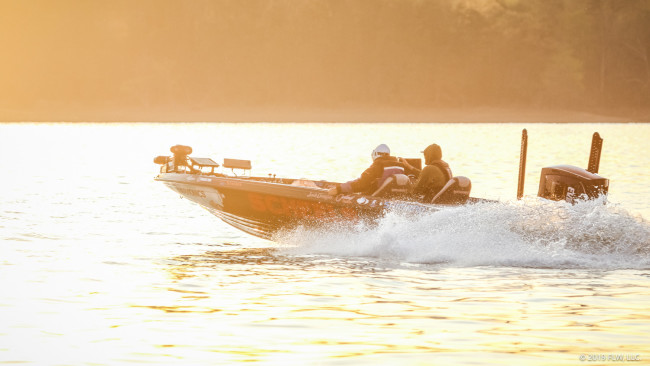 Amid a rash of early fish-catch reports sent in by the marshals, we got word that Derrick Snavely and Scott Martin each have three quality keepers in the boat early for a share of the early lead. Snavely is from east Tennessee, and he understands these mountain smallmouths. He should be a contender this week. Northern smallmouth expert Josh Douglas has two keepers and they're both 3-plus-pounders.

Really, it's been a constant stream of fish catches so far. The best place to stay up-to-date on the current unofficial standings is at the FLW Live Leaderboard. 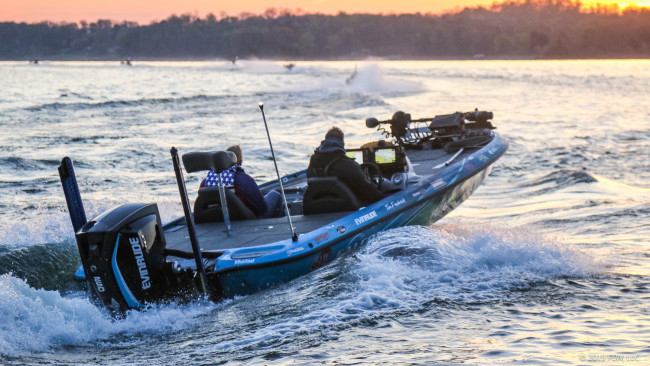 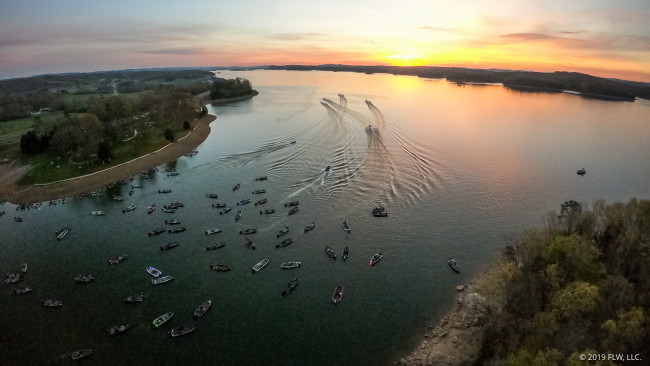 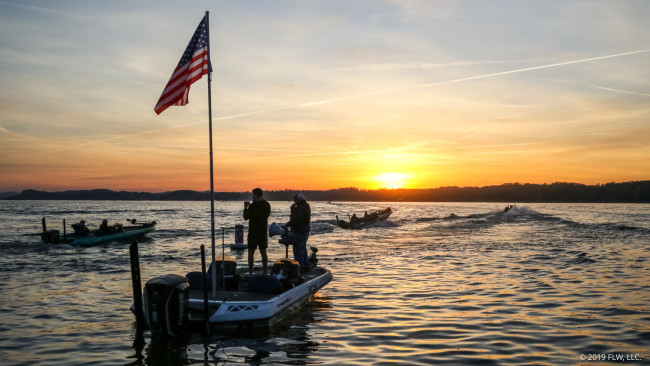 Make no bones about it, spring is here, and spring is wonderful in east Tennessee. Largemouth and smallmouth bass are trekking to the beds on Cherokee Lake, where the best bass anglers on the planet are gunning for them in the fifth FLW Tour stop of 2019. Best of all, there are a lot of ways to catch fish right now, from bed-fishing to drop-shotting out deep to slinging a little swimbait to dragging jigs. Cherokee is a new fishery for just about everyone on the FLW Tour, so there's a lot to learn this week about how to approach this fishery in a four-day tournament.

Anglers couldn't ask for better conditions than what they have today. It's partly cloudy, with enough wind to break up the clear water and enable some power tactics and high enough temperatures to keep the bass rolling toward spawning flats.

In all, fans can expect a big performance today and a stunner weigh-in full of brown and green bass in the hills of east Tennessee.