Cherokee shows out on day one (updated) 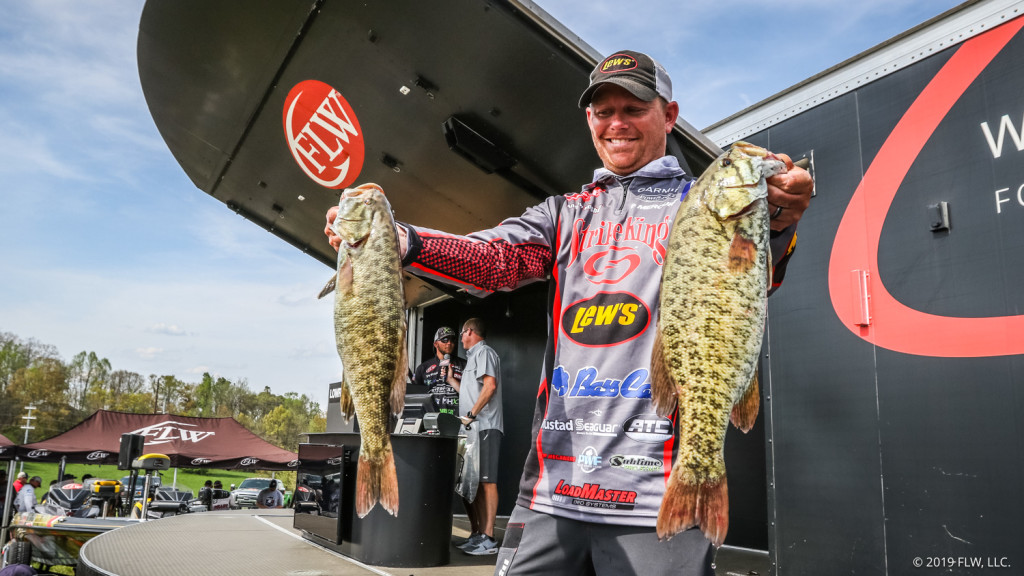 Day one of the FLW Tour presented by Lowrance on Cherokee Lake was an absolute catchfest. Leading the way, Andrew Upshaw of Tulsa, Okla., weighed 18 pounds, 6 ounces to take the lead, but 13 other pros also weighed more than 16 pounds.

Day one was dominated by smallmouths, despite the slick water and sunny skies. With new weather in line for day two, we could be headed for an epic leaderboard shakeup considering how tight the weights are.

Upshaw, though, isn’t too worried about what day two has in store for him and the rest of the field. After all, this is his first time fishing Cherokee, and he managed to find what his marshal estimated to be 28 keepers throughout the day, including five that were good enough to secure the day-one lead for the eight-year Tour vet.

Upshaw fished slow and methodical throughout the day, and while he was tight-lipped about the baits he was throwing, it’s safe to assume it involved finesse tactics and a spinning rod, as was the case with a large portion of the field on day one.

Finding key fish in practice was crucial for Upshaw, who marked a couple he shook off while working on figuring out the fishery. He went back to that spot after already securing a limit of 14 or 15 pounds in the first hour of the day and caught two upgrades. After that, it was pretty much smooth sailing for the Oklahoma pro.

“That was pretty much my day,” he admits. “I really stopped fishing and got lucky late in the day and caught a 3 3/4 [pounder] that culled up a 3-pounder. Overall, I can’t really complain.”

Part of Upshaw’s strategy for laying off his fish early in the day was due to the quantity of 3-pounders he was catching, mostly in areas where he figured fish were bedding. Though he wasn’t sight-fishing, Upshaw believes a good portion of the fish he caught on day one was comprised of bedding fish, and with a premium placed on 3-pounders, he didn’t want to wear them out.

“I caught a lot of 3-pounders,” he adds. “That’s why at about 10 o’clock I laid off them completely, because I caught too many 3s, and I knew how crucial 3-pounders would be in this tournament. I just laid off and later in the day I rolled up to one other little place I was saving just to see if I could get a bite and I caught a 3 3/4 and got out of there.”

Asked if he had any concerns about changing weather (with rain in the forecast for day two) or having enough fish to sustain a deep tournament run, Upshaw reiterated that the way things have played out so far, there’s not much reason to worry.

“All practice we had every kind of weather condition you could imagine, from cold mornings to rain and wind and everything in between, so I think it’ll be pretty much the same,” he explains. “I had a pretty consistent practice no matter what the weather was.

“I’m not necessarily worried about tomorrow, but a lot of guys caught a good bag today, and that’s a lot of fish taken off the bed. It might get exponentially tougher.”

“Tougher” is a relative term considering the sheer quantity of fish caught on Thursday. As long as the quality is still there – especially at Upshaw’s best spots – he has an excellent chance of remaining near the top of the pack heading into the weekend. 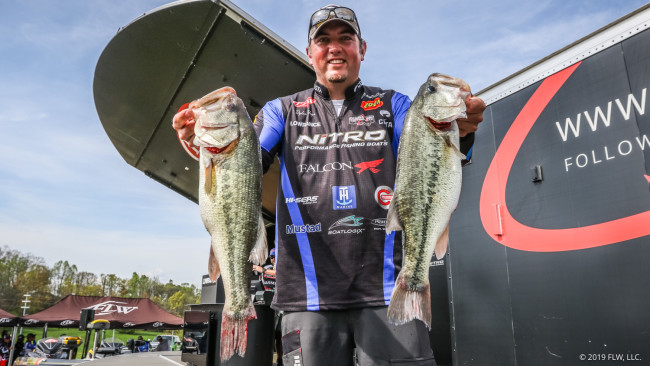 Dylan Hays went way off the beaten path on day one, en route to a 17-13 bag and second place on the leaderboard. He didn’t want to say exactly where he was fishing, but the way he was fishing – “a big rod and big line” – was well outside the norm for the field on Thursday.

Hays did a good deal of sight-fishing, and the result was another abnormality in the form of a mixed-bag comprised primarily of largemouths.

“I was on a spot I found the last day of practice I got two key bites on,” he says. “One I caught was a big one and the next cast I shook a big one off.”

Hays went back to that spot on day one and spent most of his time there. When he ran some different areas, Hays tried to copy his pattern of targeting staging areas where he might find some bedding fish.

As is almost always the case when fishing with your eyes, wind, rain and cloud cover could certainly force Hays to change gears on day two. For now, though, he’s in mighty fine shape. 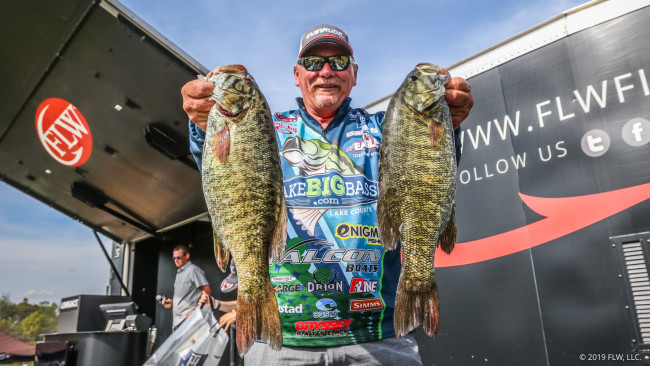 Tim Frederick hunkered down in one mid-lake area of Cherokee to catch what he estimates to be at least 25 fish on day one. It was an area Frederick believes is prime for new fish to move up to spawn throughout the day, which is the main reason he stayed put and milked that one-mile area all day long.

“Last day in practice I caught two 4-pounders on it, so I started there, and I pretty much stayed there,” he explains. “I probably caught 25 fish. I did miss one about 5 pounds that I’m hoping should be there tomorrow. I didn’t burn any gas once I got there. I kind of stayed in three little areas and that was pretty much it within a mile area.”

Frederick is a little concerned about the pressure a 163-boat field can produce on a lake like Cherokee, though, and with different weather moving in for day two, he expects to run some new water.

“I’m still going to fish the same way doing the same things, however, I’m going to run more spots tomorrow,” he adds. “A bunch of people caught a bunch of fish today. If I can catch 14 pounds tomorrow I’ll be tickled to death.”

Wherever Frederick fishes, though, he’s convinced he’s around the quality of fish that can lead him to a win.

“I know I’m around the right fish,” he says. “I just think the area I’m at has the better quality fish. I’m going to fish slow and hope for five good bites.” 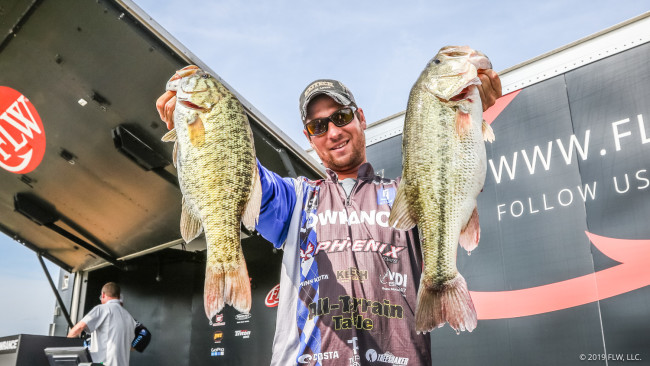 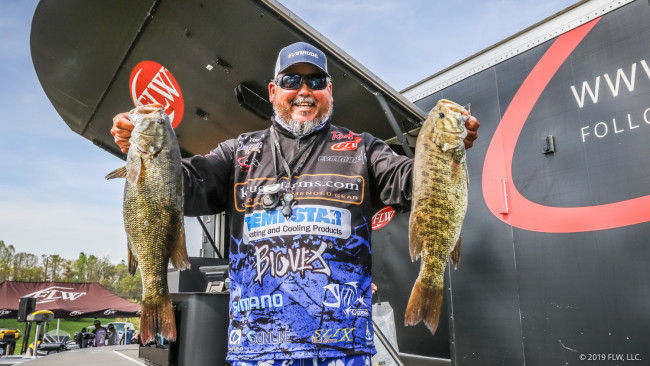 Austin Felix and Andy Young are no strangers to hammering on smallmouths. Both hail from Minnesota, and, amusingly enough, both were fishing so similarly that they opted to give a joint interview after weighing in on day one, eschewing the typical stigma of giving away too much information to fellow competitors.

Both anglers were targeting bedding smallmouths, and while they did so in different areas of the lake, the approach was the same.

“Just finesse fishing for spawning smallmouths,” Young says. “I was in the mid-lake area. I don’t know how many I caught but I’m guessing 25.”

Felix and Young weren’t sight-fishing, per se. Instead, both anglers were keying in on transition areas where there was a good chance a smallmouth was bedding down.

“We weren’t looking at them, but you’re fishing for them and kind of got to figure out what they’re on,” adds Felix. “Rock and transition banks stuff – wherever there’s a shelf or something hard for them to get next to or sit on top of.”

While both pros put together quality bags on day one, their mindset heading into Friday is where Felix and Young finally vary.

“I don’t know if I have anything left to be honest with you,” Felix admits. “I marked some fish I either missed or lost. I’ll run all that stuff early [Friday].”

Young, on the other hand, expects to build on a solid practice period to keep his run going.

“The first day of practice I had like 18 pounds just hunting for them,” Young adds. “I think tomorrow that’s what I’m going to do. I kind of know what to look for.” 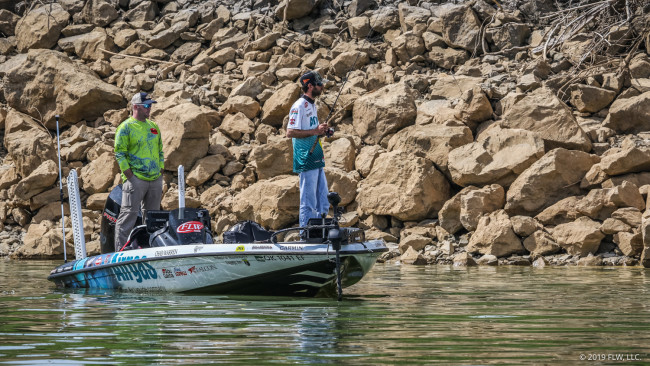 Chad Warren is having himself quite a season to this point (39th in AOY standings). With a good deed today, he might have enough good karma on his side to make a little leap at Cherokee.

Around 11 o’clock, Brandon Mosley’s boat broke down. Mosley and Warren talked, and the latter offered to let Mosley fish from his boat to fill out his limit. At that point, Warren had a 13-plus-pound limit and Mosley only had three fish.

Here’s to hoping Warren’s generosity is rewarded on day two. 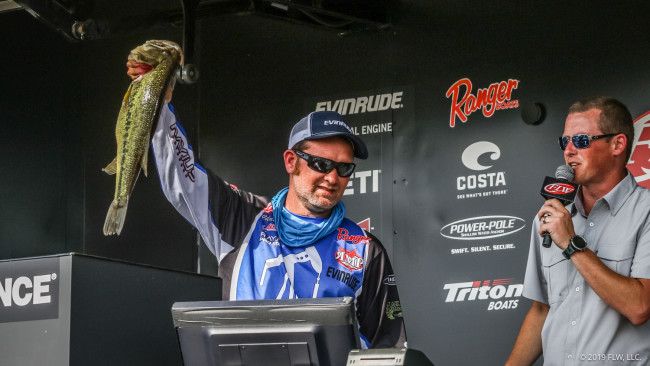 Of the 163 anglers who fished on Thursday, 143 weighed in a five-bass limit. That’s nearly unheard of at any level of competition, even the Tour level.

The average bag weight on day one was 12 pounds, 10 ounces, but that number doesn’t really do justice to the sheer volume of fish caught so far on Cherokee.

On the other hand, big bass (weighed in by Chris Brasher) only weighed 5-8, though you won’t hear too many anglers complaining about size when Cherokee is churning out so many keeper fish. 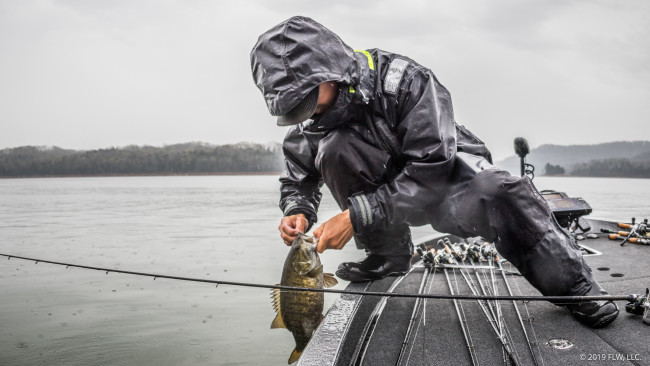 Thunderstorms are expected to roll in Friday morning, accompanied by potentially all-day rain and a lot more wind that was present most of Thursday. Compared to the warm, sunny conditions on day one, day two is going to make for some big adjustments.

Depending on who you talk to, rain and wind could improve the bite on day two. It could also completely eliminate any sight-fishing bite and force anglers to switch up patterns on the fly.

The weather is truly the big wild card heading into day two, though it’s hard to say what the final result will be in terms of weights and number of fish caught.