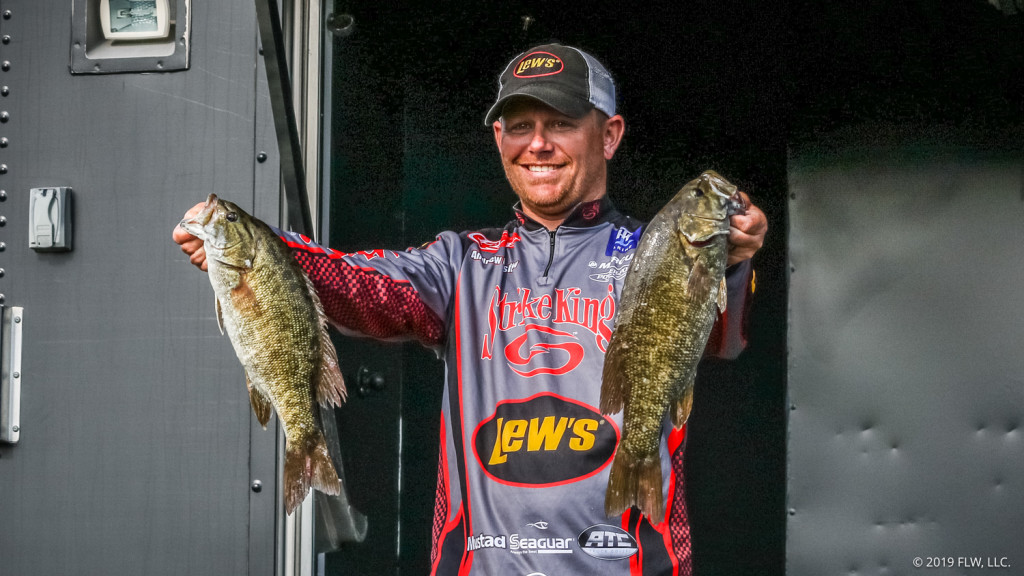 Andrew Upshaw is one day away from going wire-to-wire to secure his first-ever FLW Tour victory, and as long as the pressure and the nine pros behind him don’t knock him off course, the Tulsa, Okla., pro has a game plan to make it happen.

The Tour’s fifth event of the season, presented by Lowrance, has been a slugfest to this point. Cherokee Lake in eastern Tennessee is showing out, and while total weights aren’t what would usually constitute a “slugfest,” the sheer volume of keeper bass the field has landed this week is nothing short of extraordinary.

Behind Upshaw, a stacked top 10 looms large. Only 1 pound, 10 ounces separates the three-day leader from Tour vet Tom Monsoor, and Upshaw is only 4 pounds, 15 ounces in front of Tim Cales, who sits in 10th place entering Sunday.

With so many anglers catching tons of fish – and so little margin for error – Upshaw has already started feeling the pressure. Fortunately, he has a safety net to help calm him down.

“To lead wire to wire is just crazy … It’s indescribable,” Upshaw admits. “Where I’m at right now, I’m trying to keep it all together, but in [the weigh-in] line I felt like I needed to throw up every five seconds.

“As far as nerves go, I’ve dealt with high-stress situations before – not just in tournament fishing but football and basketball and everything like that. Tomorrow I get to go have fun. I’ve got my family here to calm me down so everything should be fine.” 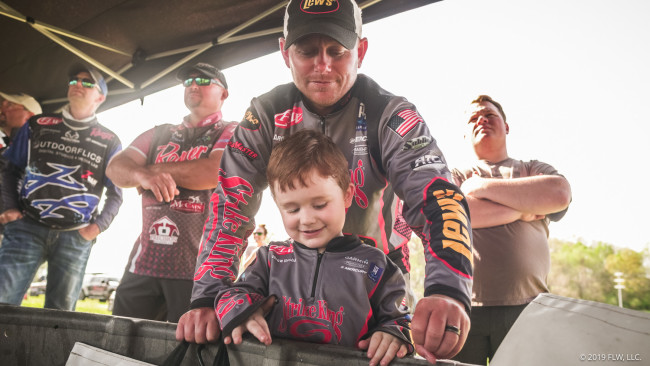 Upshaw’s family made the trip from Oklahoma on Friday after he started piecing together another nice bag and after already having secured the day-one lead. As it turns out, their presence could make the difference between a strong top-10 finish and his first Tour win.

Despite the boost his family’s arrival gave him, Upshaw started to feel the pressure Saturday when his bite started slow and he began the day with a trio of fish that weren’t long enough to throw in the box.

Upshaw admits his game plan was inherently “high-risk, high-reward,” due in part to fishing an area that was susceptible to wakes from passing boats shortly after takeoff. Fishing for bedding bass, he needed some calmer water to keep those fish on their beds and ready to protect them. 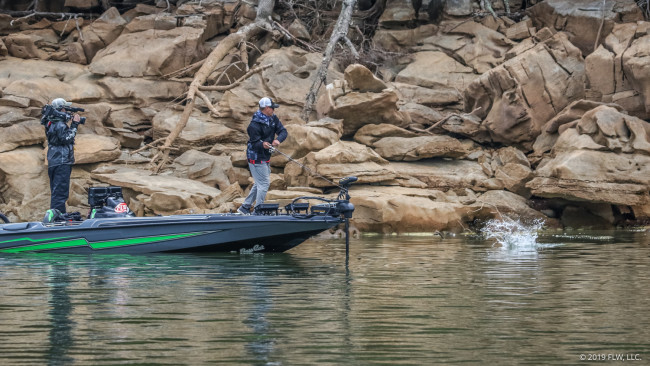 With that in mind, Upshaw plans to change things up on Championship Sunday. Instead of starting the morning in the same place, despite the prospect of lesser boat traffic due to the 10-boat field, he plans on running a new pattern to try to catch a limit while his fish re-settle from the early-morning water disruption.

“Every morning, there’s so many wakes that it’s pushing the fish off the bed for the first 20 minutes and then they get re-set and then you’ll catch them,” he says. “That’s been the biggest issue this week for me is I hadn’t been able to get them re-set in that first 20 or 30 minutes, so I’m just going to try to be smart about it, go catch me a limit in the first 30 minutes and then go try to catch big ones the rest of the day.”

Catching big ones is the name of the game, but Upshaw knows it starts with getting five fish in the box. He wants to get on them early, if for no other reason than to lift that weight off his shoulders.

“Obviously, guys are busting them right off the bat, and I need to be that guy tomorrow,” he says. “I might not, but that’s the plan.”

When you lead wire-to-wire through three days, it’s safe to say things have pretty much gone according to plan. As long as his new game plan pans out Sunday, there’s very little stopping Upshaw from making it four in a row for his first Tour win. 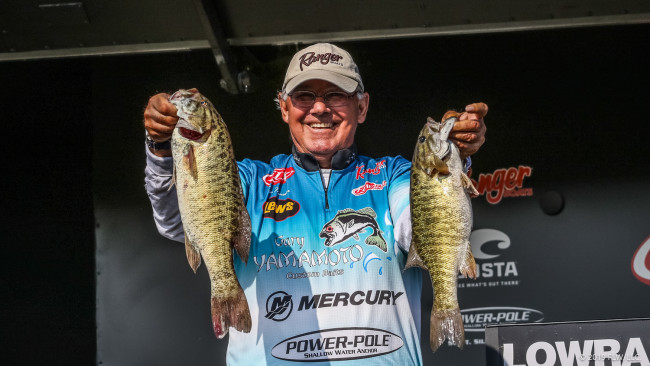 Sixteen-year Tour vet Tom Monsoor bucked the trend of fishing for bedding smallmouth with finesse tackle this week, opting instead for old faithful – a swim jig he made himself. That little white swim jig paid off Saturday to the tune of the biggest bag of the day, a 17-6 stringer full of smallmouths.

Part of what precipitated Monsoor’s big day was fishing a new area he hadn’t fished since the practice period. It was a large cut at the south end of the lake that held a few big fish that were in the right place to hammer his jig.

“Today was the first time [fishing that spot],” he says. “In practice I caught a couple in there. Everything I fished up above, it seems like you need to find fish – dumb ones that haven’t seen my jig.”

Within about 20 minutes, Monsoor had three sizeable keepers in his box to cull out some dinks, all from that stretch. He plans to start there again tomorrow, but he’s a little concerned about the fact that the fish he caught in that section of the lake seem to have spawned out already.

“It seems like they’re spawned out down there,” he adds. “I was trying to target the ones coming up to spawn.”

Monsoor says he’ll try again in that area Sunday, but he’s ready to run up the lake for prespawners or bedding fish if that pattern dries up. 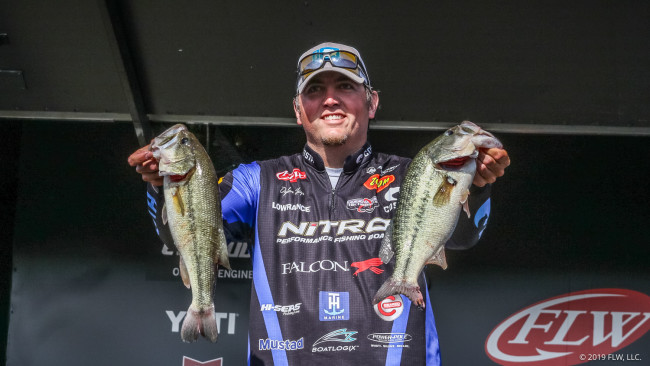 After keeping his fishing location under wraps much of the week, Dylan Hays was finally ready to discuss the strategy that has him in third place entering day four: flipping for big green bass way up in the Holston River. It’s a pattern that almost no one else got on this week, either because of how good the smallmouth fishing has been or because it takes a little while to make the run up to where the river feeds into the lake.

Hays started his practice up the river, but after checking in with other Tour pros (who were all hammering on brown fish in the main lake), he decided to give that a go for a couple days. It didn’t quite pan out, so he went back to where his week started.

“The only reason I did it was because I couldn’t get the smallmouth going,” he admits. “I started practice up there [in the river] and the first bite I got like the fifth cast of the week I caught a 3 1/2-pounder, so I wanted to do that.

“At 7 o’clock Tuesday night I ran up there and I found those fish. I got bit like every other flip. It was incredible. It was all little ones and then I caught like a 4 1/2-pounder, then I shook a big one off and then five flips later I shook another big one off.”

From then on, it was all about catching the green ones, and Hays will stick to that plan tomorrow knowing he’ll have the river all to himself. 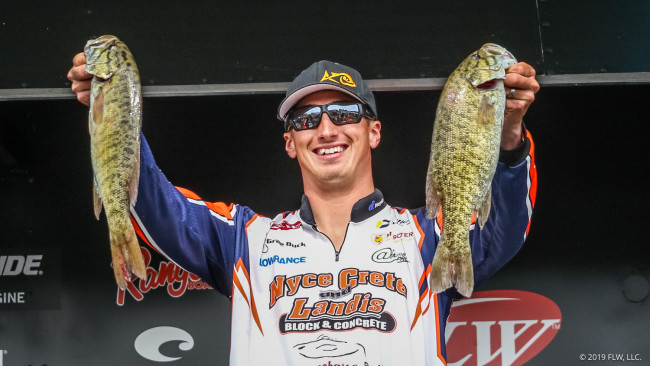 As far as eventful days go, Grae Buck maybe had the most interesting of all the anglers who fished on day three. The three-year Tour pro wasn’t so much hunting fish as he was his own white whale.

Early in the day, Buck found a smallmouth on a bed that threw his hook about 20 feet from the boat. He came back to that spot about 45 minutes later and tried again, this time getting the fish to within netting distance. What happened next was a great story whether he managed to weigh it in or not.

“I hooked her again and this time I was playing her and I had the net ready,” he explains. “I went to scoop her and she pulled off, and I saw her still and I thought I could reach her and I couldn’t and I went in. Rod and reel and net went over. I caught the rod with my feet. I got ahold of the net and got them both in. I had to go back to the Power-Pole to climb in.”

It became personal at that point, and Buck once again returned to that spot about 45 minutes later.

“She bit and I set the hook and broke it,” he recounts. “I watched her jump at least six times. I was mad and I left pretty much right after that.”

Buck had no quit in him, though, and he knew he might need that fish to make the top-10 cut. So, at 3:14 – just 16 minutes before check-in – Buck went back again and this time landed his 3-plus-pounder.

With the half pound Buck culled, he ensconced himself firmly in the top five with a great chance to make some waves in the final round.

To watch his dive in the lake, click here. 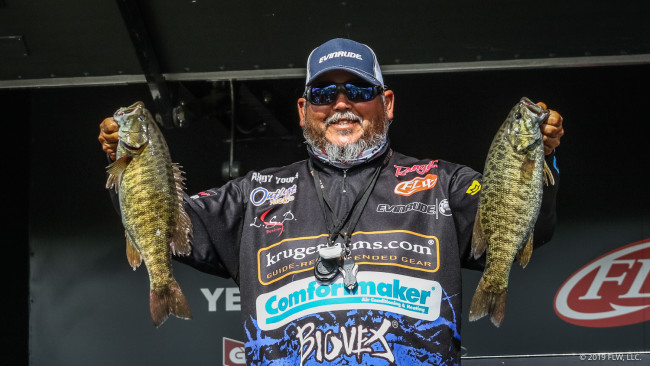 Andy Young is just a man who loves fishing, especially when he’s fishing for smallmouths.

The Isle, Minn., pro has been crushing smallmouth all week, and he’s been doing it in mostly the same water, doing mostly the same things – targeting spawners with finesse tactics.

Today, Young did run a little new water, but his pattern is so repeatable that it made it pretty easy to find new fish.

“I did the same stuff all day,” he says. “I ran a lot of new stuff. I pretty much know what to look for, so you just drive until you see what you like and start fishing and they’re there.

“I pretty much caught fish the whole time. I probably culled out a 15-pound limit. I may be able to catch most of them tomorrow because I think most of them are spawning. They’re moving up. They’re coming to me.”

Young makes it look easy, but it’s anything but easy to fish well enough all week to do it again on Sunday. With potentially volatile weather moving in tomorrow, Young jokes that he’s looking forward to the challenge.

“It is what it is. I like adversity. The harder it is, the better I do.” 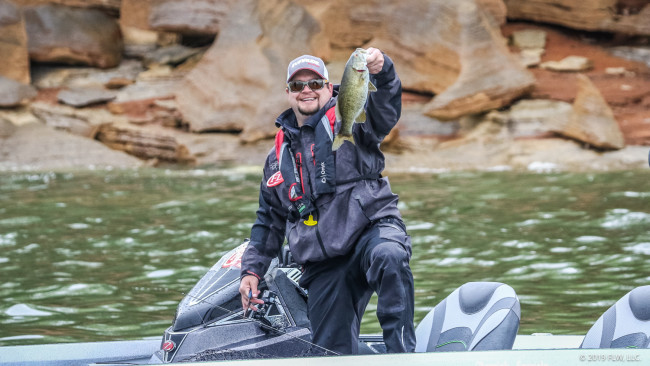 A week of limits

With as good as the fishing has been on Cherokee this week, it really comes as no surprise that all 30 pros who fished on Saturday weighed in a limit. Fewer than 20 anglers failed to weigh in five fish on Thursday and even fewer than that struggled to land five keepers on day two. There isn’t much weight separating 1st from 10th, and it’s a good bet 10 limits tomorrow will make for an exciting final weigh-in. 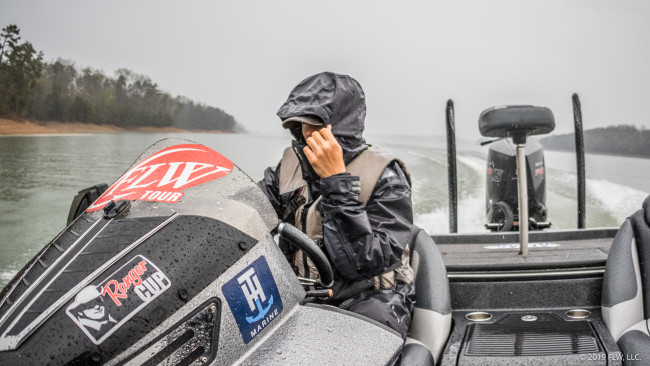 Forecasts called for more rain than was delivered on both days two and three of this event. With the exception of a couple isolated showers, it was downright beautiful most of Friday and Saturday.

Still, the forecast is a little more ominous heading into Sunday, with multiple potentially severe storms expected to move into the area and stick around. Rain and wind haven’t done much to the bite to this point, but if it gets worse on Sunday, it’ll be interesting to see what it could do to the top 10 anglers’ weights. 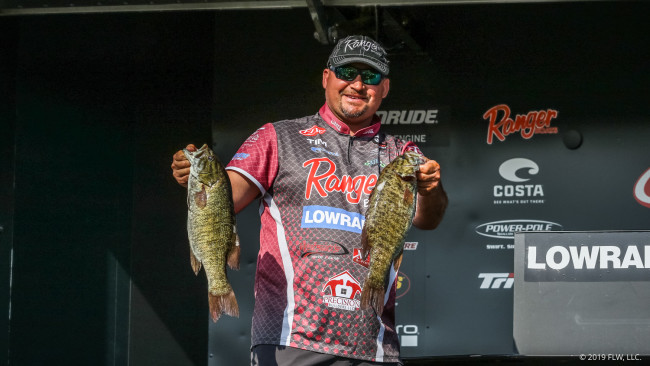 Less than 5 pounds separates 10th place (Tim Cales at 47-5) from first (Andrew Upshaw at 52-4). At the top, Tom Monsoor only trails by 1-10 and Dylan Hays is only 9 ounces behind him. Additionally, only 10 pounds, 3 ounces separated first from 30th this week, and 23 anglers caught at least 45 pounds over three days of fishing.

Get ready for a wild finish on Sunday.