Greenblatt Takes Over at Chickamauga 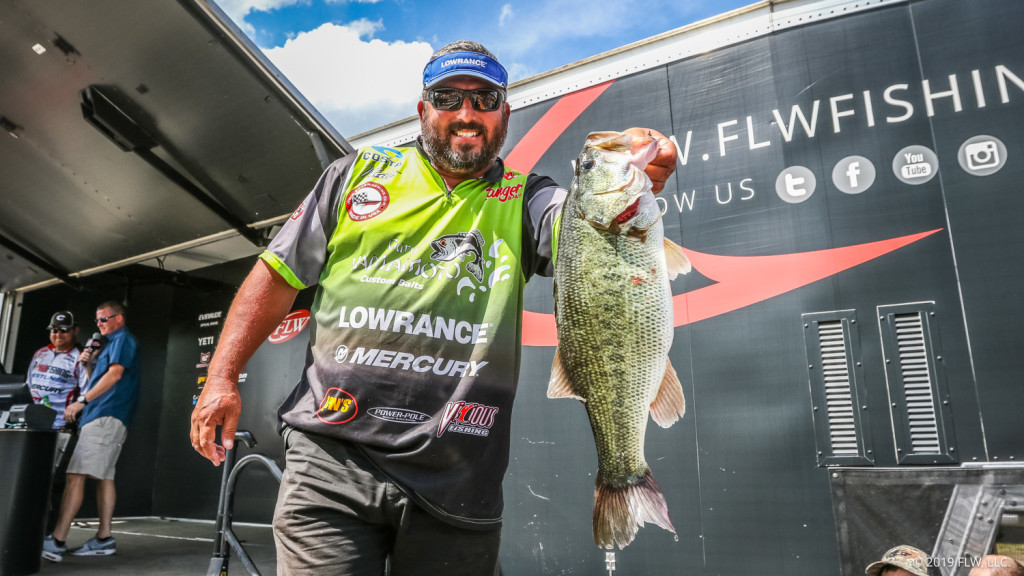 Matt Greenblatt was one of the few pros fishing the FLW Tour’s Lake Chickamauga event this week who didn’t let off the accelerator on day two. With weights down across the board, the Port St. Lucie, Fla., pro brought 19 pounds, 13 ounces across the weigh-in stage and jumped day-one leader John Cox to take the lead with 43-2 overall.

The tournament, presented by Evinrude, hasn’t quite lived up to expectations to this point, due mainly to the odd transitional period into which it falls. Some fish are still moving up to bed, but the big ones don’t seem to be all the out to the ledges yet – a summertime staple for Tennessee River fisheries – and they haven’t been all that easy to catch up shallow, either.

Greenblatt seems to have found the magic formula, or at least the magic spot, where some big ones have been hanging out. He isn’t catching giants, but he’s been hauling in enough quality fish to put together a bag that only needs one kicker to do some damage.

The six-year Tour pro didn’t change anything up from day one, which produced 23-5 of quality Chickamauga largemouths. He simply found a great spot that’s been holding a ton of fish and went to town.

“[It was the] same thing as yesterday,” he explains. “Same spot. Same everything. That slope, I milked her for everything she was worth. Yesterday, I was hoping I was going to get decent weather [on day two]. We were expecting rain and nasty stuff.”

With rain in the forecast for day one (rain that never ended up coming), Greenblatt hammered on that spot pretty hard, but his fish seemed to replenish overnight, and even with some extra fishing pressure on it Friday, it produced nearly as well. 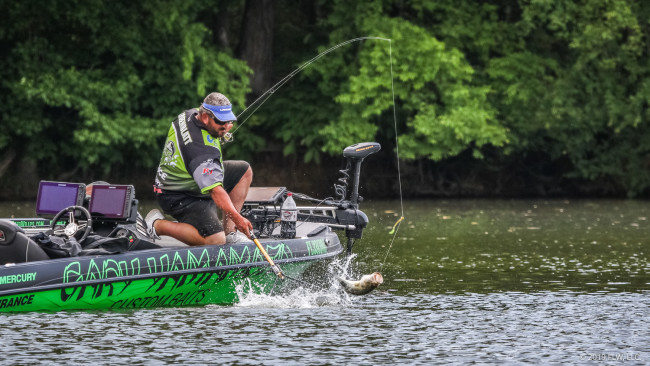 “Of course, you get a little bit of company, too,” he adds. “I had two other boats in there with me: Lendell [Martin Jr.] and John Hunter. John got a 3-pound average out of there. We’re hitting it pretty hard, all three of us.

“We’ve got hopefully two more days in here, and I don’t know what she’s got left.”

Should Greenblatt’s spot dry up or the weather muddy up the water enough to turn off the bite, he has a backup plan in mind.

“Go to the dock pattern for sure,” he says. “Find me a little clear water. If by noon it’s not happening, we’re going to drop back, punt and go to the docks.”

Greenblatt has been encouraged by a developing “Senko bite,” though, and he’s confident he’ll manage to catch some decent fish if he has to start running docks. So far this week he’s been toying around with Yamamoto Senkos rigged a number of ways: wacky-rigged, Texas-rigged, weightless wacky-rigged and Yamamoto-rigged. He’s also been dying the tail of his Senkos for a little extra pop.

While Greenblatt is secretive about his other go-to baits and locations, he did divulge a little bit about his special spot.

“I’m starting to figure out where they go when the sun comes up and after the shad spawn dies,” he says. “Eight to 12 feet on that slope. I don’t know why they’re there. There’s really nothing there. But hey, don’t look a gift fish in the mouth.”

There seems to be something special about that depth range, at least in Greenblatt’s estimation. If for whatever reason his spot stops producing and he doesn’t want to run docks, finding another hump in that depth range could be the ticket.

Whatever happens on moving day, Greenblatt knows it’s going to take more than just cookie-cutter 3-pounders to win this tournament. He caught a 6 1/2-pounder that buoyed his bag on day two, and he’ll need more of those to seal the deal.

“God blessed me today with that one fish,” he says. “That made my bag.”

And if things don’t go well tomorrow? Well, he still has a nice check to look forward to.

“I get to go fishing tomorrow,” he adds. “They’ve got to pay me to leave.” 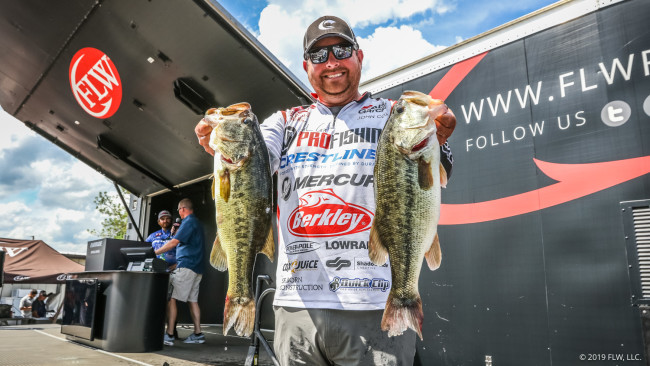 John Cox didn’t quite catch them as well on day two as he did on Thursday, but 17-15 is nothing to be ashamed of when Chick is fishing tougher than usual. He did more than enough to remain within striking distance of the lead and charge back hard on moving day.

Cox caught most of his nearly 25-pound bag on Thursday sight-fishing for bedding fish. On day two, he had trouble finding as many big females sitting on beds.

“A lot of the pairs I found yesterday were gone,” he explains. “I was thinking about maybe going for the easy ones first, but instead, I went for the bigger ones and they just weren’t there.

“How this place works, it just depends. Tomorrow we could get out there and they could all roll up and you catch 30 pounds. It had that potential yesterday evening. I’m not sure what kicked them off [beds]. I kind of liked the way it looked later in the day, so you never know.”

If bad weather rolls in Saturday and Cox can’t take advantage of sight-fishing – or the big ones simply aren’t up shallow – he has an idea in mind that involves fishing some shallow offshore bars. It’s a risk, though, especially if it forces him to miss a window to take advantage of the shallow bite.

“It’s so late in the year,” he adds. “They’re not staying long. I just think those windows are really small. They’re coming up and moving out, but we’ll see.” 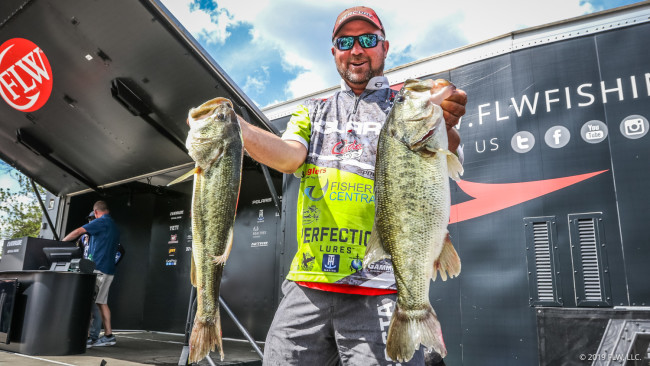 David Dudley is a magician with a wacky-rigged worm, and he certainly added some quality fish thanks to his bag of tricks on day two at Chick.

FLW’s all-time money leader put himself in position to make a lot more of it this weekend by flipping and tossing around a wacky rig up shallow. For Dudley, it’s all about numbers, especially with this fishery being capable of producing a jackpot with any cast.

Those numbers are the main reason Dudley is committed to fishing shallow the rest of the way. He says he did some ledge fishing during practice and knows where he can find some schools, but he’s convinced he won’t find anything out deep that’s as good as what he’s found so far.

Dudley also added a 5-pounder to his 20-1 bag with just 20 minutes left to fish on Friday. Everything is coming up Dudley this week, and he’s only 15 ounces off the lead heading into the weekend. 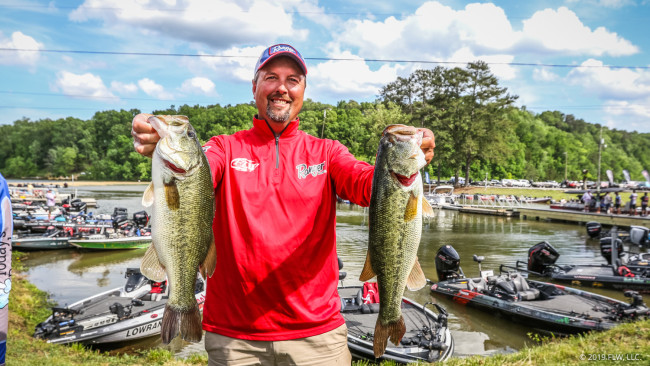 Ron Nelson is a cerebral angler who is always thinking about what fish are doing and when they’re doing it. As such, he’s spent a ton of time both shallow and out deep this week, trying to take advantage of windows in which he has the best chance of catching quality fish.

Nelson has split his time pretty evenly both days, but he does regret not starting out deep on a ledge to kick off his day two.

“I should have stayed out,” he admits. “I gave a good ledge to a buddy of mine, Jimmy Brewer. He had a 4 and a 7 the first two casts. I was going to start next to him and I wish I would have now. I’m probably going to jump on that tomorrow morning, because it’s a big school.”

Nelson brought 24-6 to the weigh-in stage Thursday, and while he didn’t have as great of a day Friday (14-11), it’s not as if the Berrien Springs, Mich., pro didn’t get the right bites; he simply lost or otherwise missed the fish that would have pushed him into first place.

“You’ve got to work hard and keep your head down,” he adds. “I lost a big one today fishing a wacky rig.”

He lost that fish because his line was wrapped around his rod tip and he couldn’t reel it in. Later in the day, Nelson had a big female on a bed, but the male swam off with his bait and he couldn’t resist catching it with less than a limit in his livewell. By the time he pitched back in there, the female was gone.

Still, Nelson is getting quality bites, and he proved Thursday what he can do with those bites. Don’t expect the same bad luck to plague Nelson on Saturday. 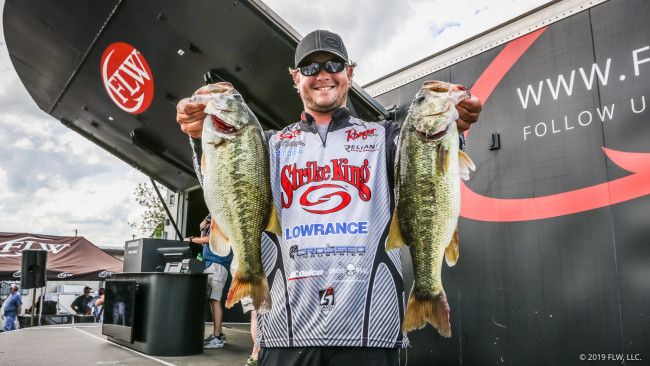 Jared McMillan has been doing what he does best this week – flipping shallow cover. It worked to the tune of 20 pounds, 9 ounces Thursday, and, despite some of his best water drying up on Friday, he still managed 18-8 to take fifth place into moving day.

McMillan’s saving grace on day two was finding some new water with some fresh fish, and his bite really turned on later in the day.

“I ran a little bit of new water today and it saved me,” he says. “I had a rough, rough morning this morning. I just couldn’t land fish. I think that little front that pushed through kind of affected that.”

McMillan isn’t sight-fishing, so any weather that moves in tomorrow shouldn’t affect him too much. He’s just “running 100 miles per hour trying to cover everything.” He also has a bit of a pattern working right now, thanks in part to running new water on day two.

“I burned through my stuff from yesterday and only had about 12 pounds,” he explains. “I ran to a new creek and caught a few. I started to look for some more of that type of pockets.”

All that to say, things are looking good for McMillan to make his third top 10 on Tour with another strong showing on Saturday.

“I’m excited for tomorrow for sure.” 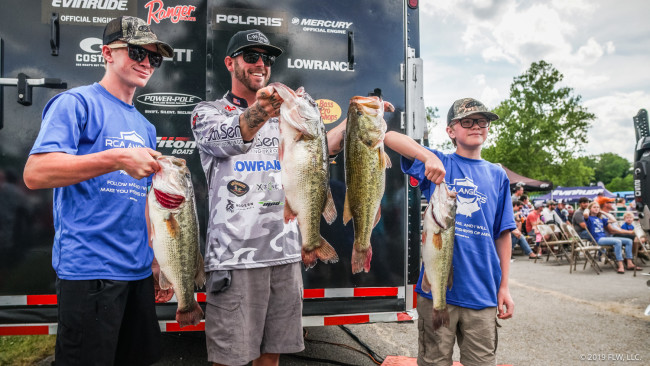 Aaron “Legit” Britt did some damage on day two. The Yuba City, Calif., pro caught the biggest bag of the tournament so far with a 27-3 stringer, moving him all the way to 11th place after a slow start (8-12 on day one).

Britt had some quality bites on day one, but he couldn’t manage to get them in the boat. Asked what he was doing differently on day two, he simply said he’s not doing anything differently, save for landing his fish.

Funnily enough, landing fish should be a lot harder than it was on day two. Britt lost his net during the Tour’s last stop (Cherokee) and just never replaced it. If it keeps working out like it did on day two, though, he might want to finish the season without a replacement.

Day one saw a bunch of 8-plus-pounders and even a few that came close to breaking double digits. It’s only a matter of time before a Tour pro hauls in a 10-plus on Chick.

Day two wasn’t the day, though. Charlie Ingram came closest with an 8-8 that took Big Fish honors for the day. 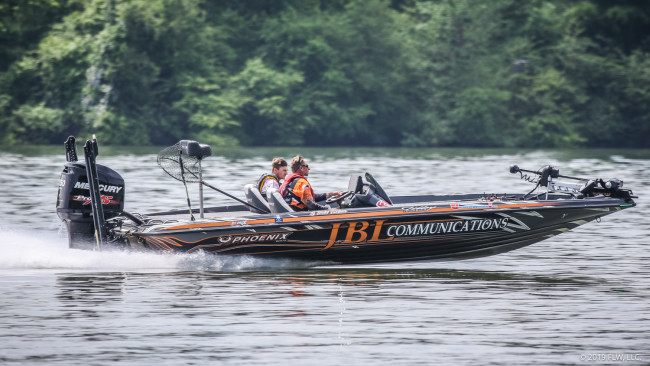 Things could have been bad for J Todd Tucker on Friday. Like, really bad.

While trying to land a fish that wrapped itself a duck blind, Tucker leaned out of his boat to untangle his line, in the process putting all his weight on the blind’s crossbeam. It gave way and Tucker fell face first into one of the support posts, busting his nose and toppling into the water.

Tucker was dazed, bloody and floating, and his marshal, John Young (who went on to win the Marshal contest) pulled Tucker from the water and helped patch him up.

“You tell him the whole story,” Tucker asks Young while being interviewed. “You saved my life.”

Tucker was banged up but okay, and he went on to weigh in 15-7 for 60th place and a paycheck. Young received his own check for winning the contest, but he’s also leaving Chick with a great story and many thanks from his day two pro.