Complete coverage of the 2019 FLW Cup 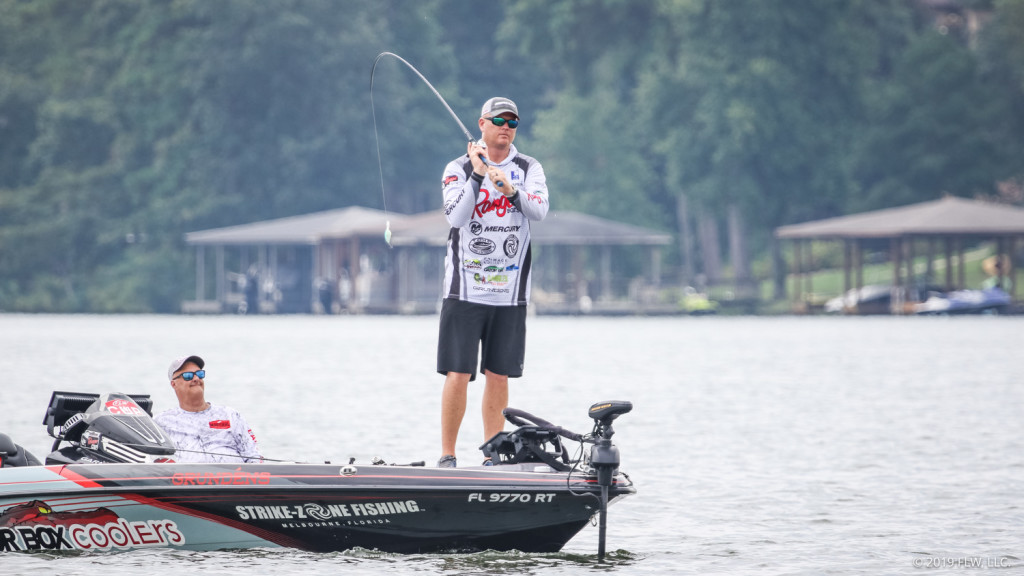 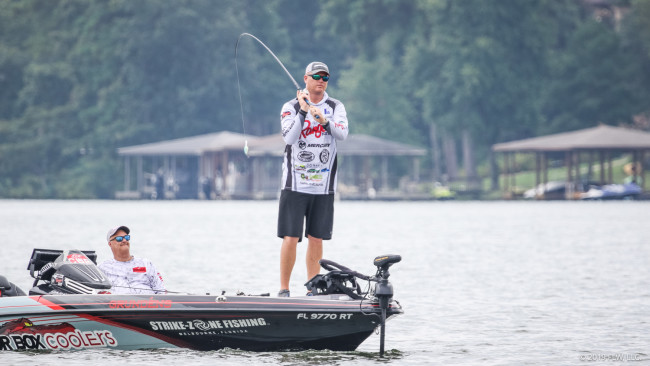 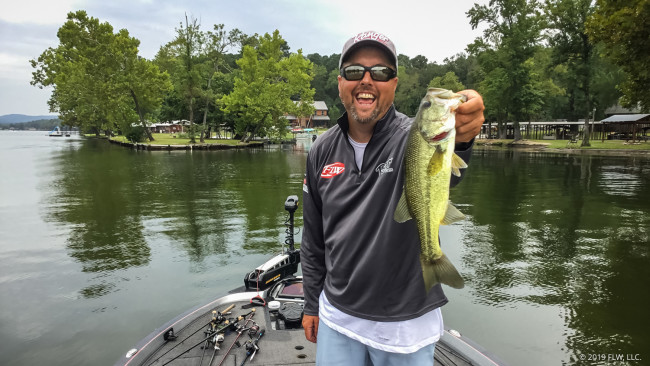 In a span of five minutes Kyle Walters was able to get back-to-back 4 1/2-pounders. That rocketed the Florida pro to the top of the leaderboard.

It’s safe to say the bite is starting to pick back up on Hamilton for a ton of other anglers too. Austin Felix made a few culls and now has a limit worth 10 pounds and is sitting in the top 10. Ron Nelson was also able to add a few keeper fish to his livewell. Bryan Schmitt just dumped a 3-plus-pounder right at the boat.

The FLW Live Leaderboard will stay up for another hour for fish-catch updates, but the blog is closing down for the day. The first flight of pros is due in at 4 p.m. CT, and then will start making the trek to downtown Hot Springs to weigh in. If you’re in the Hot Springs area, swing by Bank OZK Arena to watch the pros cross the stage live. If you’re not in town, you can watch everything go down on flwfishing.com at 5 p.m.!

The midday lull is still in full effect on Lake Hamilton. Some weather is starting to roll through the Hot Springs area. It looks like the upper end of the lake is starting to get rained on. We heard a few reports that the fish were chewing good when it rained in practice, so hopefully this gets the fish fired up a little.

Fishing appears to have really slowed down across Lake Hamilton. Most pros have their limits and are now focused on culling. The brush piles in the middle and lower end of the lake have been getting slammed pretty hard today. We’re still seeing anglers target shallow fish up the lake, but a lot of those fish have lockjaw. FLW Live is up for another hour, so stay tuned to see if anyone can stick a kicker before the day is over. 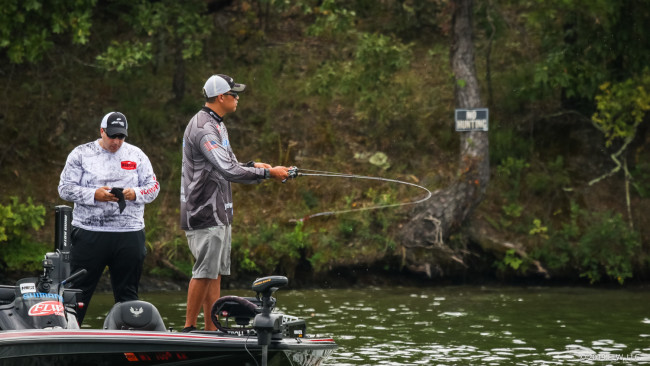 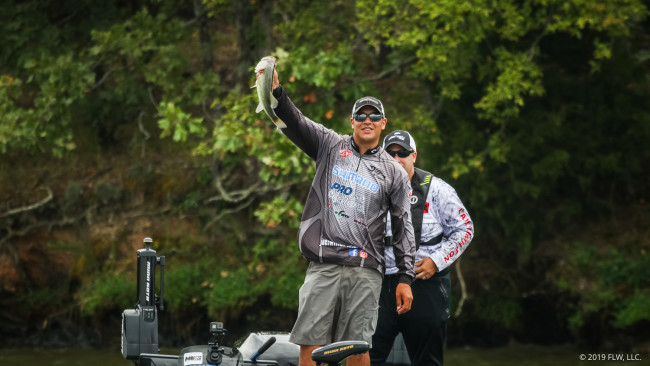 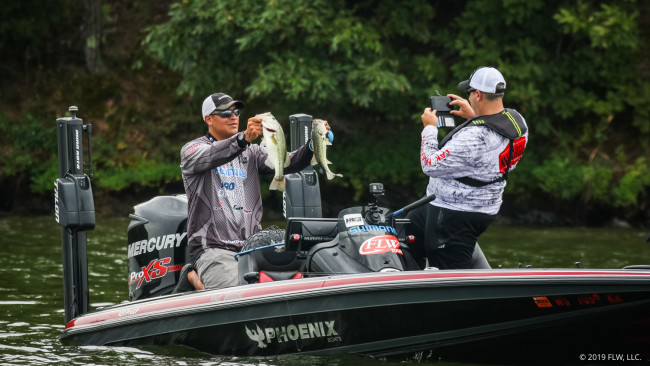 Joel Willert made a nice cull not long ago. The Minnesota pro is targeting brush and other cover in the main lake. Erik Luzak was fishing some offshore stuff and put his second 3-pounder in the boat, which culled out a micro. He is now up over 10 pounds and is sitting in the top 10. 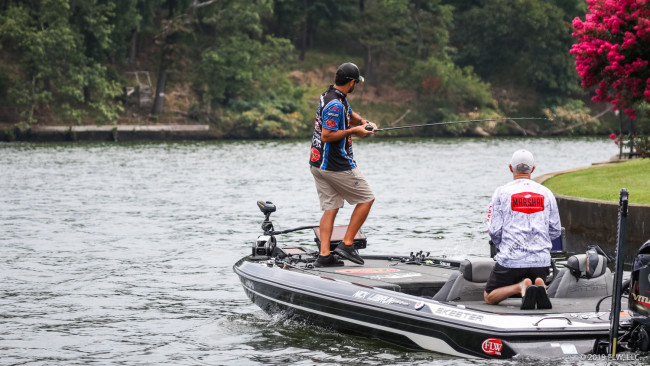 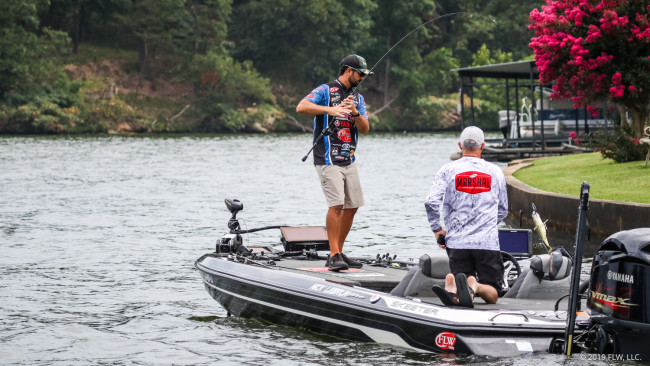 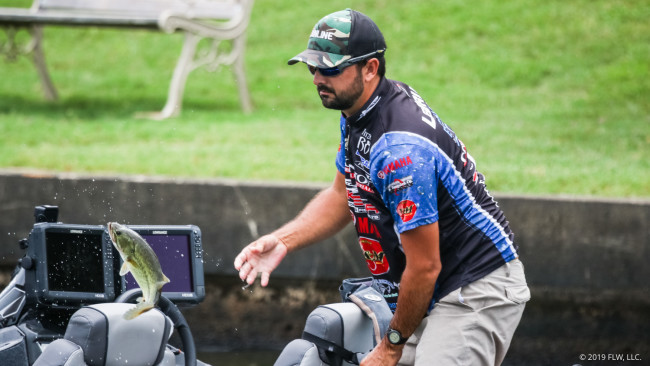 Nick LeBrun just lost a 3-pounder on a topwater bait. The fish jumped at least four times before spitting the hook. If LeBrun would have landed it, he would have been right on the heels of the unofficial leader Cory Johnston. After losing the fish, the Louisiana pro casually said, “That’s topwater fishing. You aren’t gonna get them all in.”

Thrift is quietly making his way up the leaderboard. He has a bunch of 2-pounders in the box. One kicker will have him right in the mix on the lead.

Bryan Schmitt is going back to a spot where he had a couple big blow-ups on a topwater bait earlier in the day. 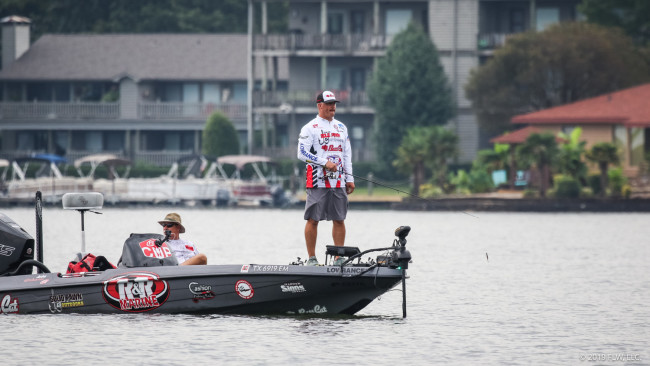 August in the South is not your typical time for fish to be on bed, but we might be seeing it here at Lake Hamilton. North of the 270 bridge the water is much cooler because of the incoming cold water from Lake Ouachita. We’re hearing reports of finding water in the 60s, which is quite a contrast from the main-lake 90-degree water. That might be enough to push some fish into spawn mode. If you’ve watched FLW Live at all today, you’ll see that the guys up the river are honing in on specific fish.

Back in the main lake, the pros who are targeting brush seem to be turning it on a little bit. Osborne caught a 4-pounder, and Latimer filled out his limit on the deep fish. Joel Willert is also targeting specific laydowns in the main lake. 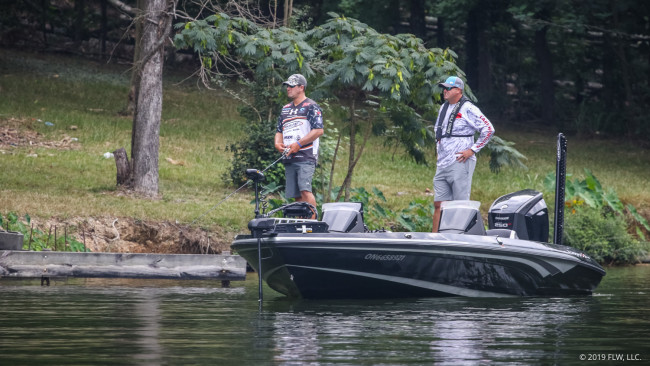 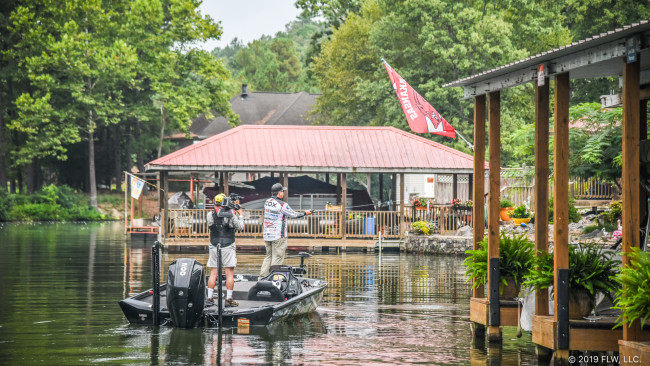 Cory Johnston made another nice cull and has around 12 1/2 pounds. He’s still on the topwater game up shallow. Right behind Cory on the leaderboard is Joel Willert, who has a little over 11 1/2 pounds.

John Cox was doing some sight fishing up the river and caught a nice keeper not long ago. He has a trio of dinks that he needs to get rid of. If the sun keeps coming out, Cox’s bite should get better and better. 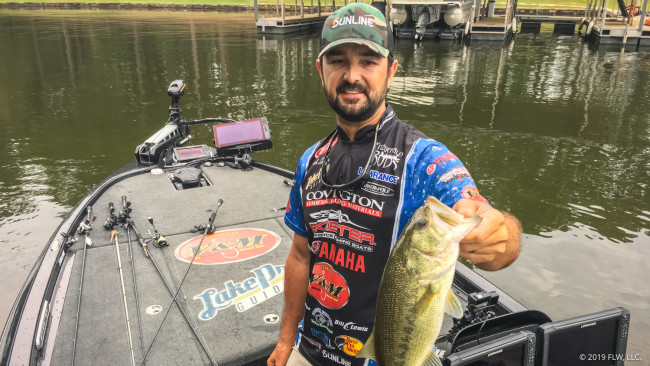 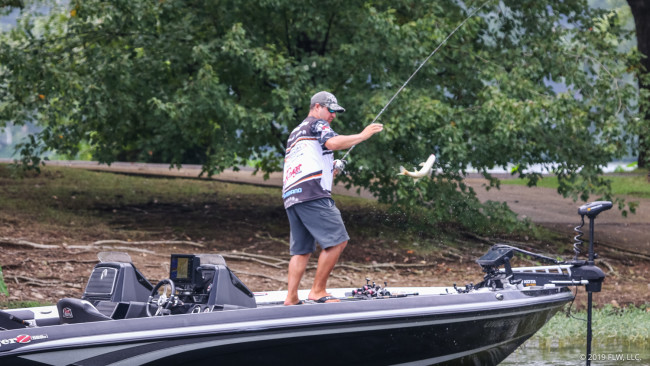 The pros who had early limits are now working on culling. Cory Johnston’s marshal just reported that the Canadian pro culled himself up to about 11 pounds. He caught all of his fish on a topwater bait. Louisiana pro Nick LeBrun also made a few nice culls to get his limit to double-digits. LeBrun was doing work with a topwater bait too. Both Johnston and LeBrun were sitting top 5 after day one of the 2018 FLW Cup at Ouachita. It’s looking like a little bit of deja vu could happen for the two pros. 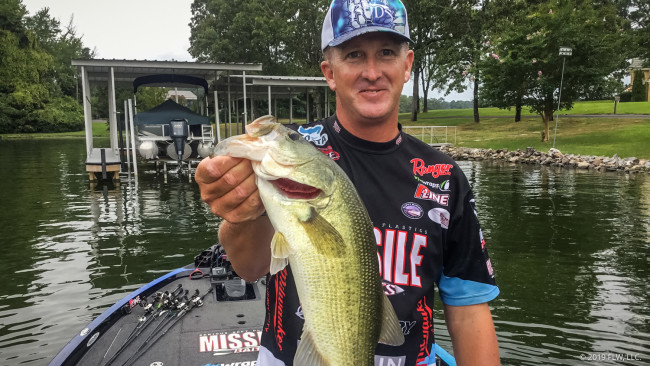 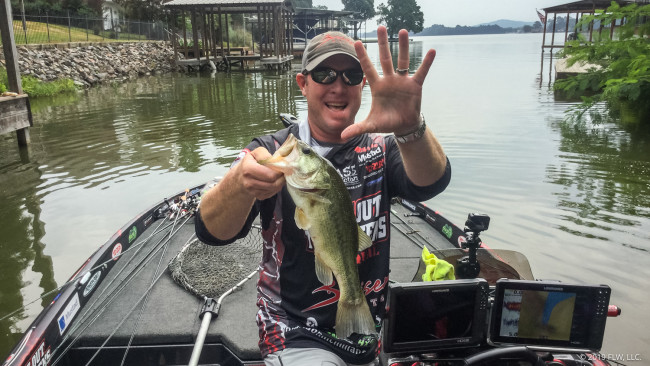 After bagging another 3-pounder, Bryan Schmitt has control of the lead. He’s still chucking his moving bait around some shallow cover. If Schmitt can add one or two more 3-pounders he will be in great shape at the end of the day.

FLW International Division qualifier Erik Luzak just stuck a 4 1/4-pounder. His marshal reported that the Canadian was fishing areas on and off the bank.

Brandon McMillan has a quad of 2-pounders in the livewell. He has to be pretty happy with that considering the trolling motor issues he had to deal with this morning. 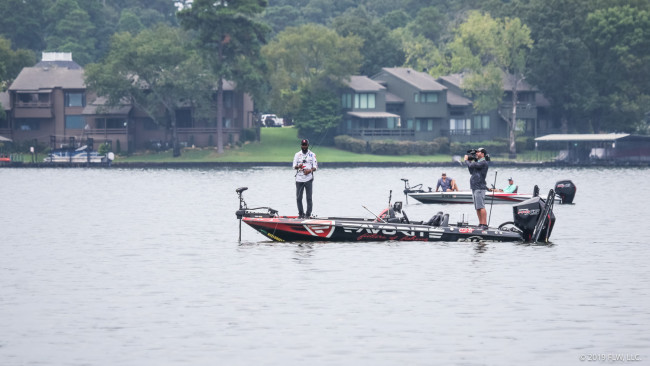 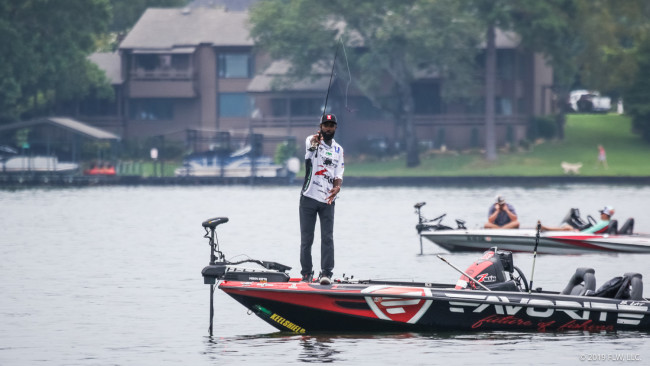 The sun is starting to come out a little bit on Lake Hamilton. Joel Willert’s marshal reported that the Minnesota pro has a 9-pound, 12-ounce limit, conservatively. Matt Reed finally bagged his fifth and is now the first pro with more than 10 pounds. Other than Reed and Willert, not a whole lot has happened in the last half hour. However, Brian Latimer was singing and doing David Dudley impressions on FLW Live, which was awesome to watch. 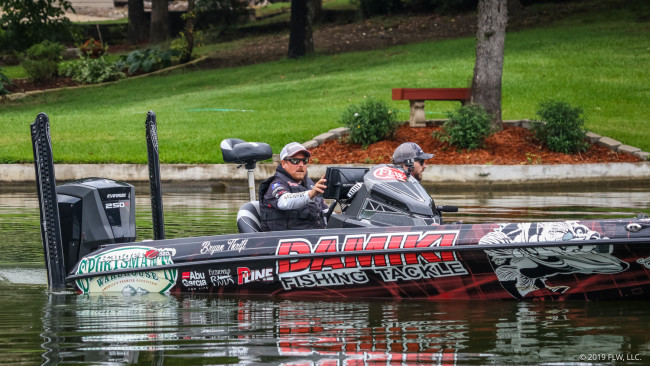 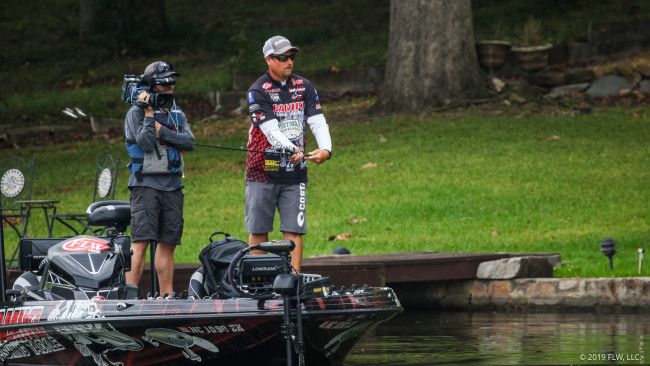 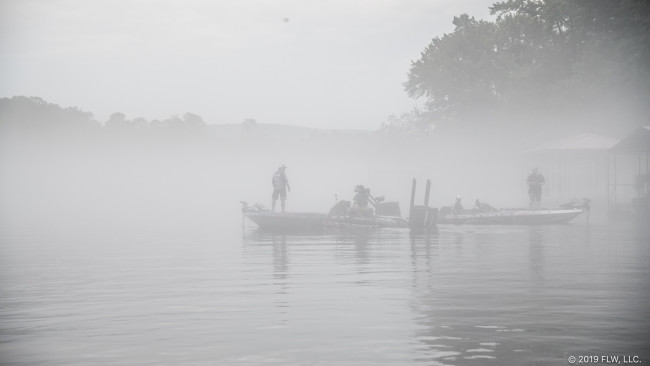 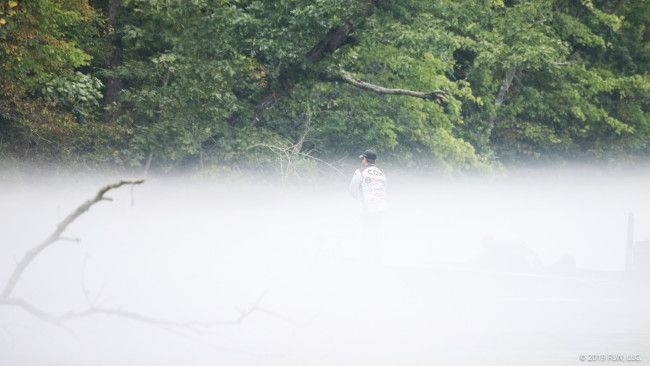 The pros are scattered from dam to dam on Hamilton, but most are congregating at the far ends. The anglers who ran up the lake are hitting fog once they get into the cooler waters of the Ouachita River. We’ve seen pros target mostly brush piles and shallow cover so far this morning.

Brandon McMillan isn’t having the morning he hoped for so far. Right now, the Florida pro is battling some trolling motor issues. Luckily, he still has a ton of time left in the day and hasn't fallen too far behind.

Thrift just put fish No. 5 in the boat to complete his small limit. There are a handful of pros sitting with three or four fish in the box. It seems like the fish aren’t quite set up yet to bite. The overcast conditions might have them acting a little funky. 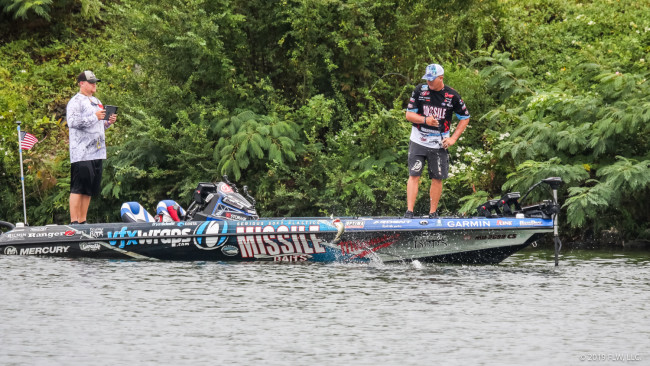 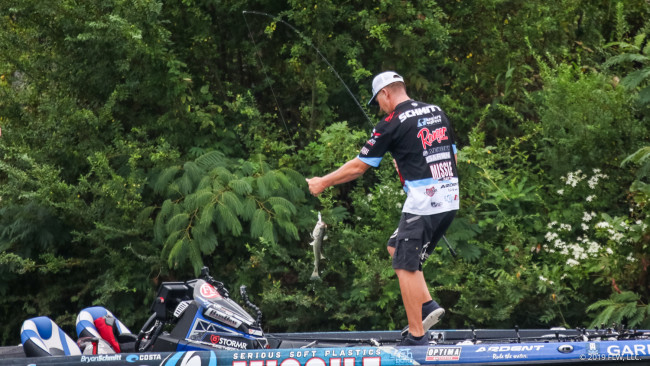 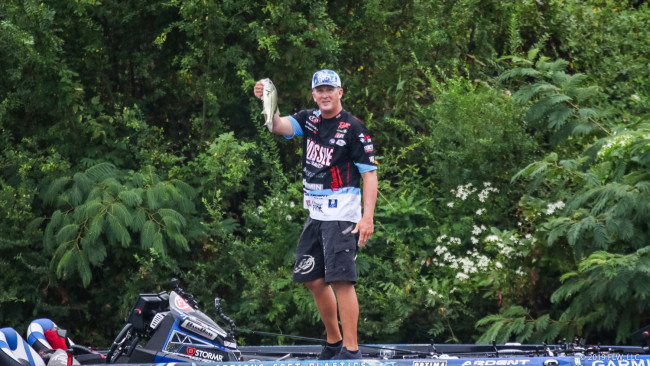 Maryland pro Bryan Schmitt got his rhythm going this morning by bagging a trio of solid keepers. Two of his fish are 3-pounders. Schmitt was working some shallow areas with a moving bait to catch his fish.

Jordan Osborne has himself a small limit in the boat. His fish were schooling when he caught them.

A lot of other pros have been chipping away at small keepers here and there. More big fish should show themselves soon.

Florida pro Kyle Walters, the 2018 Costa FLW Series Championship winner, is the first pro to check in a limit this week. His total is about 7 pounds, with a 2-pounder being his biggest fish. Though Walters' home state is one of the best places to fish for shallow bass in the world, he's catching his fish offshore this week.

Also, to update a previous post, Matt Reed's biggest bass is bigger than we thought. It's a 5-pounder, so he's still the unofficial leader. 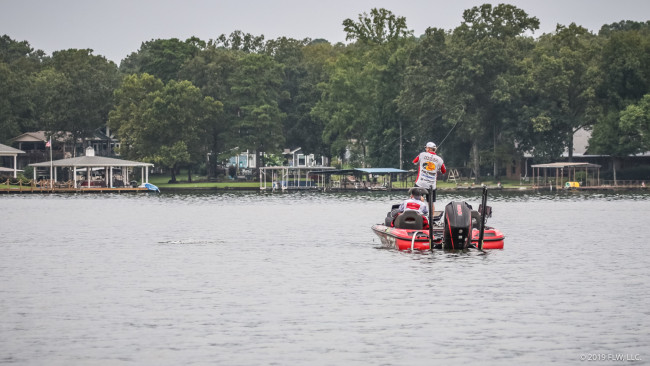 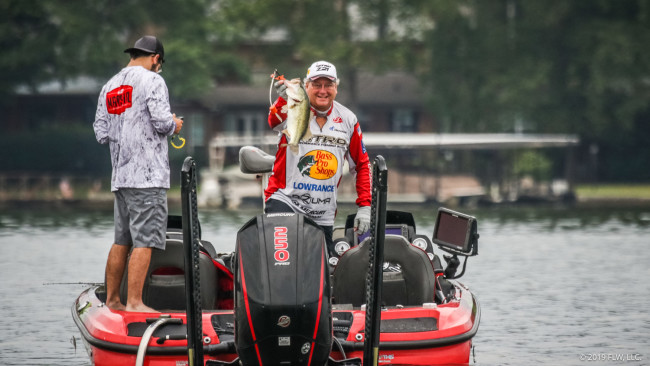 Not surprisingly, the shallow bite is on this morning. These overcast conditions are definitely helping that bite. A bunch of fish have been caught on buzzbaits and other topwater around docks, grass and wood. the other pattern we've seen so far is fishing brush piles. So, it's basically what we expected. Texas pro Matt Reed has had the best start to the day with a 4-plus-pounder and another solid keeper. The pros are scattered from one end of Hamilton to the other. Keep tabs on the leaderboard for up-to-the-minute estimates all week long. 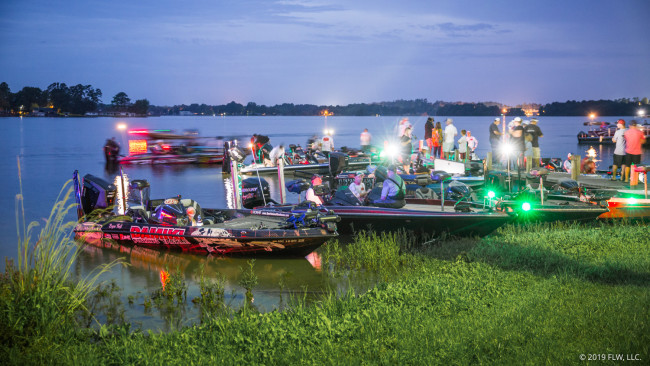 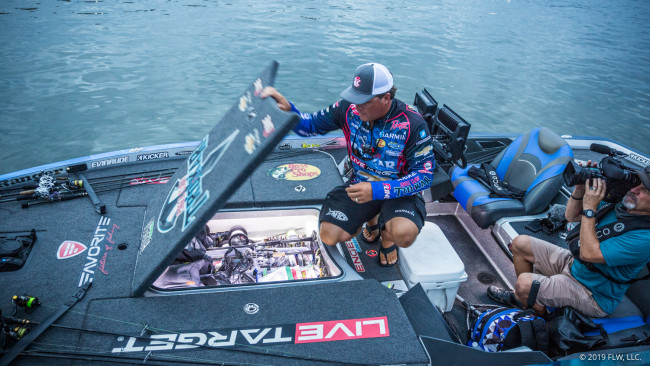 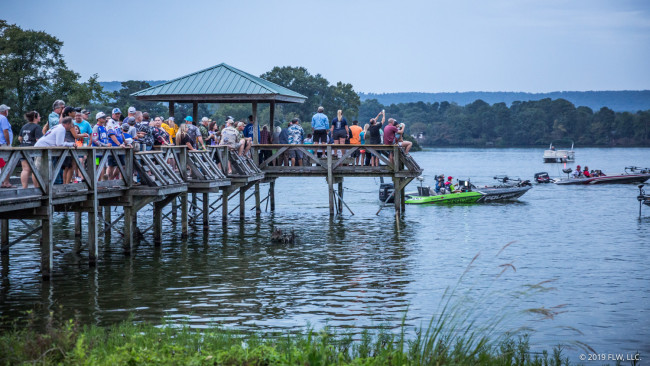 The 2019 FLW Cup is officially underway at Lake Hamilton in Hot Springs, Ark. Last year, when the location of the Cup was announced, there was speculation that this could be one of the toughest Cups of all time. A challenging pre-practice report reinforced that assumption. But this week, practice has been fantastic. There are fish to be caught from one dam to the other on Hamilton, from the shoreline to brush piles 30 feet deep. And there are a lot of bass being caught. This morning pros welcomed a change in weather conditions. It's overcast, with rain and scattered thunderstorms in the forecast, which should make the shallow bite even better, and probably won't hurt the deep bite too much. This is shaping up to be a fantastic championship, and no matter what happens, someone is bringing home the big silver trophy and a check for $300,000. Will it be a veteran pro looking for his career-making win, or a young gun ready to springboard to the top? Follow along this week to find out.

Precipitation: 40 percent chance of rain and scattered thunderstorms in the afternoon

Wind: Light from the east, but switching around to the west