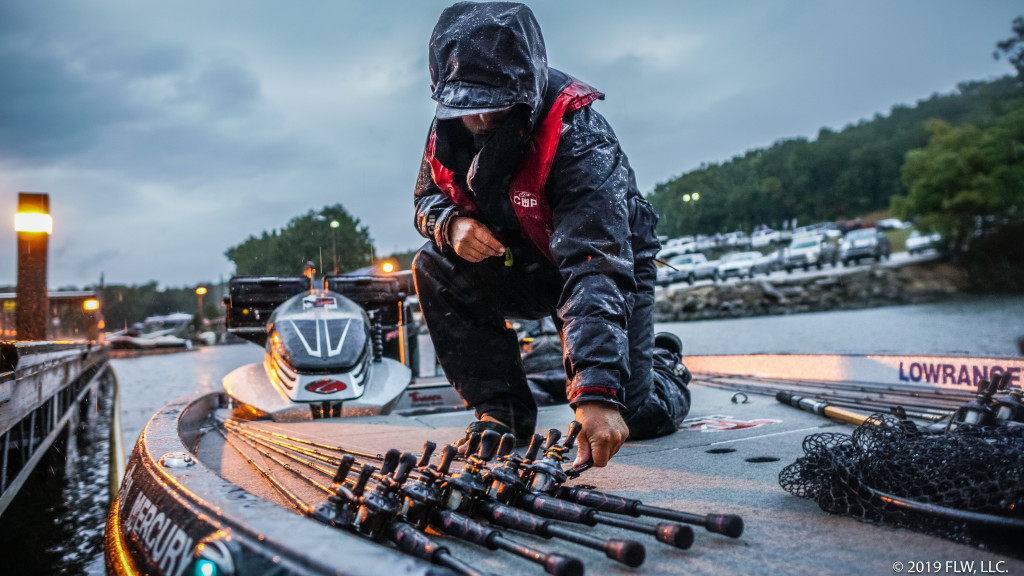 This season he completed a grueling schedule of tournaments that included the seven-event FLW Tour schedule, which culminated with a third-place finish in the FLW Cup at Lake Hamilton back in August, a couple of T-H Marine Bass Fishing League (BFL) events, two events each in the Costa FLW Series Southwestern and Southeastern divisions, and three more each in the Northern and Central divisions.

Ebare loves to fish. A lot. And he’s fished in 20 FLW events so far in 2019. His 21st will be the Costa FLW Series Championship at Lake Cumberland at the end of October, at which he hopes to earn his first win in FLW competition.

The 27-year-old Denham Springs, La., pro has two top-three finishes to his name this season. In his career, he’s turned in six top 10s with FLW, though the first four were all YETI FLW College Fishing tournaments. Cumberland sure would be a great location for his first win.

“I’ve never been to Cumberland,” Ebare admits. “Not having any previous experience on the lake doesn’t bother me that much. That’s one cool thing about fishing so much is you get used to showing up to bodies of water and just fishing.”

That’s been a common refrain for Ebare to this point. It’s pretty uncommon for a tournament pro to fish 21 tournaments in three leagues and multiple divisions in one season all at familiar fisheries, especially one who’s just a couple years removed from legally being able to rent a car. 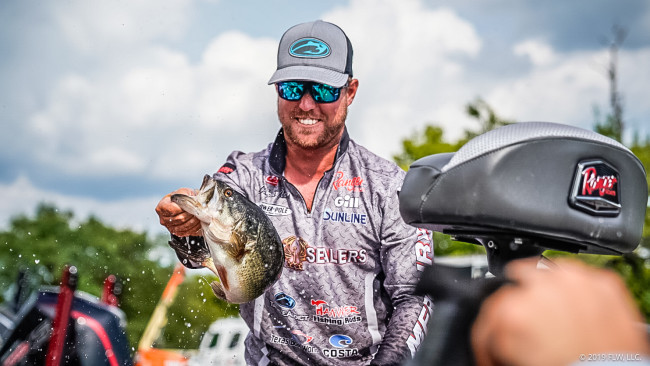 The reason for it all

Dakota Ebare isn’t out to prove anything to anyone not named Dakota Ebare.

Fishing so many events isn’t about making a name for himself, and it’s not about winning as much money as possible – though few tournament anglers don’t want to do that, too.

For Ebare, it’s all about fast-tracking the thing most pros spend years, or even decades, in pursuit of.

“It’s definitely about the opportunities to learn and get better,” he explains. “You can read and watch and do all those things – and it all helps – but if you’re not on the water really just learning and seeing things, it’s just not the same. Honestly, that was my main reason for doing that [fishing 20 tournaments], just getting as much experience and time on the water as I possibly can.”

Ebare isn’t looking for some easy hack or get-rich-quick scheme. He’s thinking about the future while focusing on the present.

“I’m young, and I don’t have a lot of responsibilities other than myself at this point in life,” he adds. “One day I will have those things, hopefully, and I won’t have as much freedom as I have right now.”

So, for now, Ebare is investing all the time he can in to setting himself up for a long and successful fishing career, even if that means fishing fewer events as time goes on. 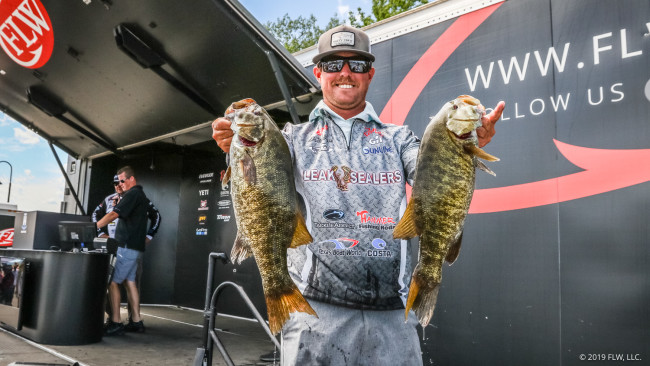 If the goal is to be the next Bryan Thrift, having the opportunity to learn from one of the best bass anglers on the planet is a great way to get there. Fishing the Tour with Thrift this year has done just that.

“He’s set the bar really high, and I’d like to be at that point somewhere in my career, hopefully in the future. In order for me to get there and be as good as him, or maybe even better one day, I’ve got to work as hard, if not harder. The only way you get that experience is on the water.”

And it’s not just on-the-water experience. According to Ebare, it has to be in a tournament environment, where pressure mingles with knowledge and technique and dances around with desperation and elation.

Ebare has learned that fact from experience; the kind of experience only a 20-tournament season can offer.

“I know I have a ton still left to learn. Every day it kind of changes a bit,” Ebare says. “I try to do everything I can on my own. I don’t seek out information. I don’t feel like I’m learning as well if I get things handed to me.

“When it comes down to it, you can’t be truly successful trying to mimic someone else and the way they fish. At the end of the day, you have to be on the water and apply those things and figure out what works for you.” 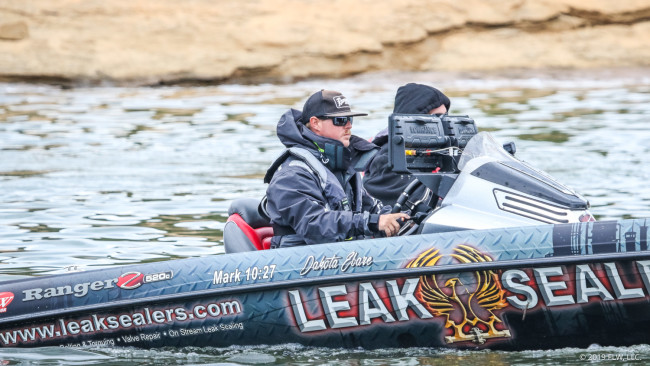 Bass fishing is a funny sport. Two anglers can fish from the same boat with the same rods and the same baits making the same casts. Sometimes one angler catches the fish. Sometimes it’s the other. But most of the time, the biggest bags go to the angler who does exactly what works for him or her.

“The biggest thing that I learned this year is what works for me; learning to fish my way,” Ebare explains. “Everyone has certain things that they like to do or they’re stronger at. Bryan Thrift has a program he uses on the water, and he’s perfected that. But that’s his program, and that doesn’t mean it would work for anyone else. I’m sure Scott Martin has a certain system. Todd Castledine fishes a certain way that works for him. I think the biggest thing I’ve learned this year is what works for Dakota.”

In a sport where conventional wisdom is usually the norm, Ebare ascribes to going off the beaten path as the true avenue to success. But that requires keeping an open mind, which can sometimes put an angler at a disadvantage in the short term.

Take Ebare’s practice and preparation, for example. Instead of soliciting information or doing massive amounts of research before fishing a new lake (he does some research, but that’s not what it’s all about), Ebare takes pride in utilizing his practice time in the way that’s best for him.

“I’ve really learned how to practice,” he says. “Before this year, I’d go to Costa events and maybe spend a week just like everyone else, and I don’t think that works for me. Having that much time on the water really does nothing but confuse me, because you’ll get really dialed in on something as soon as you get there, and by the time the tournament gets there, it’s long gone.

“When we used to go to college events, I’d show up at lakes I’d never been to before, and the best day I’d have on the lake the entire tournament was the first day we’d get there. My mindset is, when you show up somewhere you’ve never been, you just go fishing. You don’t have preconceived notions about what you should be doing. You just let the day kind of dictate itself, and you go fishing with an open, clear mind.”

As part of Ebare’s practice strategy, he’s gotten into the habit of leaving his rods in the locker the first day. He’ll spend his first day riding around the lake, observing, making mental notes and getting a feel for the fishery. Are the bushes flooded? Are there any bedding fish? What’s the current doing in the morning and in the afternoon?

From there, Ebare spends a day in certain areas, getting familiar with what he thinks might play during the tournament. Fishing doesn’t really start until the last day of practice, when he knows his patterns have a better chance of holding up into the tournament.

“Going into the tournament with an open mind – that’s something I’ve been working on this year, and it’s really worked for me,” he says. 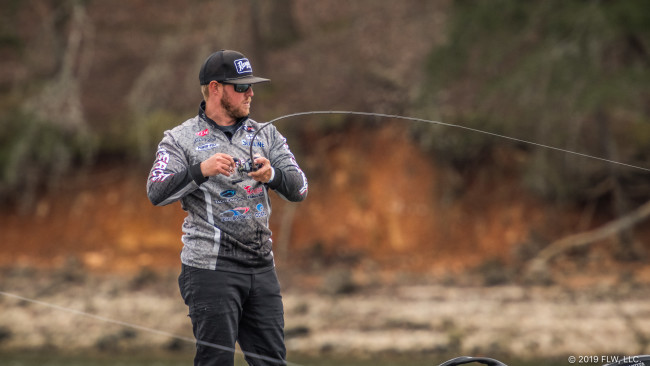 Ebare will need to have an open mind in just a week, when he’ll be practicing for the Costa FLW Series Championship on Cumberland. It’s a lake he’s never been to before. He’s excited for the challenge, but no matter where he is, to Ebare, a bass is a bass is a bass.

“They do the same things everywhere; they just relate to their environment differently,” he says. “We try to overcomplicate things way too much. When it comes to deer hunting and duck hunting and fishing, it’s all the same. They’re all just an animal in their environment trying to survive.”

That mindset gives Ebare a starting point. He knows what season it is – transition time pretty much everywhere but the most northern parts of the country – and that means breaking down Cumberland will be more about conditions than knowing exactly where to look from day one.

“I’m really about current conditions,” he says. “I’m going to watch the weather all this week. The lake level plays a big factor in what’s going to be going on. 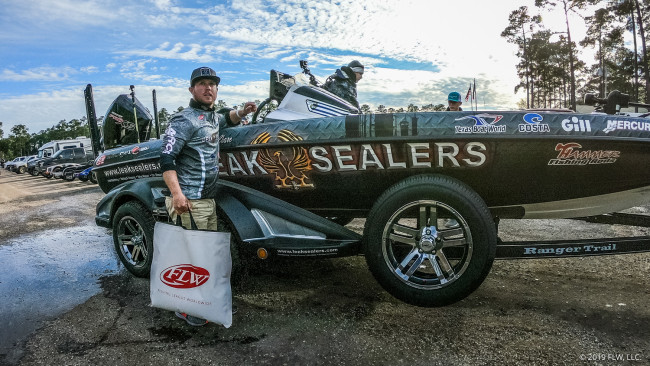 “Fishing will humble you so fast,” Ebare says. “We’ve all seen that happen to everyone at the highest level. Guys can be making all the right decisions, and all the sudden it just changes and you have a bad event.”

Confidence is the ability to bounce back from those bad events without letting the failure impact the future. Ebare knows that well.

“Go back to the Tour event on Chickamauga,” he adds. “That was one of the events I looked forward to more than any of them. I was so excited to go to Chickamauga this year and fish that Tour event, especially after having a good event there [19th place] in the Costa Series.

“I think that was my worst tournament of the year. That [finishing 96th] was tough because I was so excited for that event, and I was so frustrated I didn’t do good. So, I left there and I went straight to Table Rock, and I finished second in that Costa event the next weekend.”

Chalk that up to experience, too.

Ebare certainly has confidence in his fishing abilities, which also comes with on-the-water experience. He grew up fishing shallow in Southern lakes, so he’s spent a lot of time also getting comfortable fishing offshore. It’s part of his program. It’s what works for him.

As the season has progressed, Ebare has added to and tweaked his program to not only expand his skillset but also ensure he’s catching fish and cashing checks.

And, of course, looking ahead to the future. 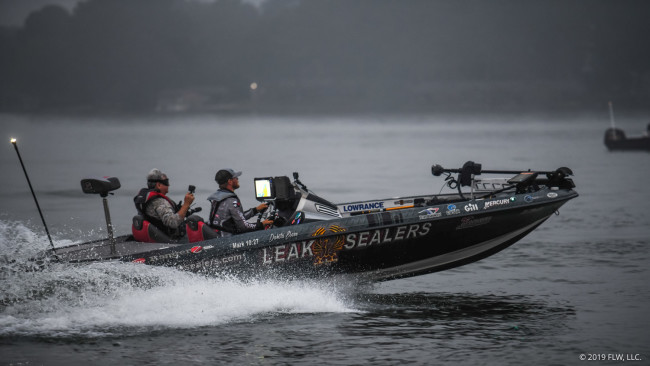 Ebare’s goal in his rookie Tour season was to win the Polaris Rookie of the Year award. It’s an award every angler only has one shot at, and it’s not an easy one to win.

Despite finishing the Tour season 27th in points, he missed that goal by virtue of stellar rookie seasons from Bradford Beavers (second in ROY points) and ROY winner Ron Nelson. Ebare could be bitter, but he’s not. It only serves to motivate him more.

“That [winning ROY] was something I really wanted to try to accomplish,” he says. “Unfortunately, Ron had a phenomenal season. The guy earned it 100 percent. Bradford was ahead of me as well.”

Missing out on Rookie of the Year just means setting more goals. It means fishing a lot more tournaments and working to get better and better with each event. And, while his new goals include once again making the FLW points championship and the Costa FLW Series Championship next season, there’s one goal Ebare has full control over.

“I once heard somebody say if you get 1 percent better every day you’re 100 percent better in 100 days,” he says. “I kind of try to keep things realistic and just go with that.”