What to expect when the FLW Pro Circuit heads to Texas 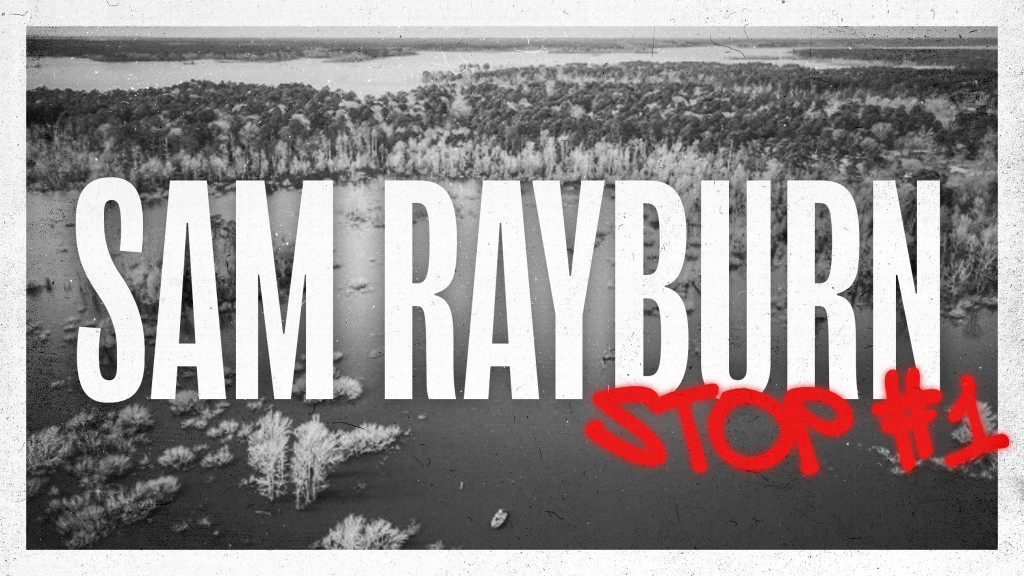 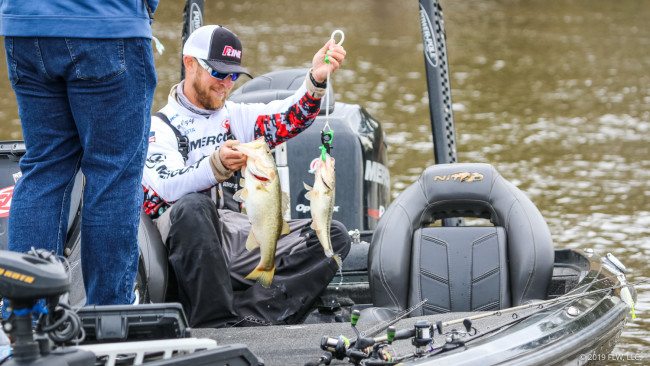 Sam Rayburn has a reputation as a phenomenal bass fishery and a giant in the tournament world. At more than 114,000 acres, it’s the largest reservoir contained entirely within the borders of the Lone Star State. The Angelina River feeds Rayburn, which sprawls out into a typical Texas lowland impoundment that features timber, bushes, submerged hydrilla, plenty of bank vegetation, and, of course, lots of legendary Texas “drains” or ditches that are renowned for producing giant bass.

The lake is a flood-control impoundment, so it does experience high- and low-water years, fluctuating roughly 7 feet throughout a typical season.

Rayburn is an easy 20-plus-pound lake, where limits that weigh in the upper 20s are common, and 8- to 10-pound bass frequently make it to weigh-ins. 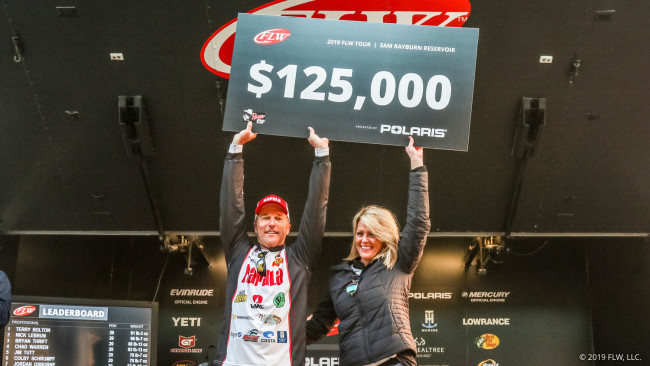 It’s only been a year since the FLW Pro Circuit has been to Rayburn, and things should look a lot different this time around. Heavy rains in 2019 left the lake flooded for the majority of the season, including when FLW came to town in January. Because of that, the fish were stacked in certain ditches near whatever hydrilla could still be found, making it tough on much of the field. However, the top 10 pros did work. Terry “Blade” Bolton cranked two ditches to perfection to win with 91 pounds, 3 ounces total, but his day-two catch of 33-9 really helped carry him through the weekend.

More recently, the first Phoenix Bass Fishing League presented by T-H Marine event of 2020 took place on Rayburn on Jan. 4. Kevin Lasyone took home the title with a weight of 20-8. Lasyone took advantage of sunny conditions and spent his time shallow near vegetation. Targeting anywhere from 2 to 5 feet of water, Lasyone caught his fish with a Rat-L-Trap and a V&M Thunder Shad swimbait with a Lazyman weighted swimbait hook. 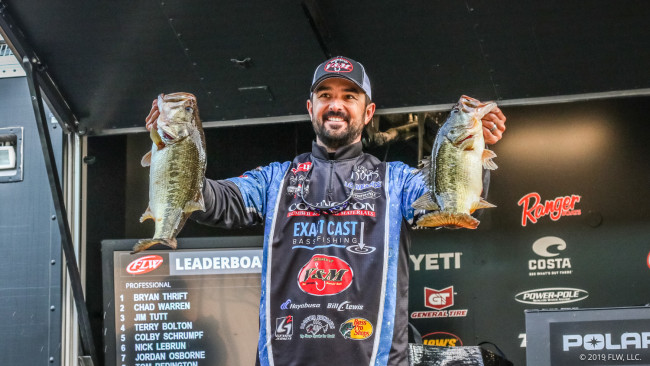 Instead of the extremely high, dirty and cool water the field dealt with last year, Rayburn is currently about 2 feet below full pool and clear, with relatively high water temperatures. From a fishing standpoint, things should be pretty dang good, according to FLW veteran Jim Tutt.

“It’s going to be a lot different than last year, including water level,” says Tutt. “I think overall we’ll see more mid-range sacks, like in the 15-pound range. I’m going to go out on a limb and say there won’t be as many big sacks as we saw last year. But the fishing will be better overall, especially for the guys that haven’t been to Rayburn much. I believe we’ll see someone catch a 12-pounder in this tournament. There are too many good anglers to not have a giant weighed.”

While the likelihood of multiple upper-20-pound bags might be lower than last year, it’s still Sam Rayburn, and with 10-pound bass roaming its waters you never know what could happen. Tutt’s point is that instead of a feast-or-famine bite like last year, this year it should be easier for everyone to find and catch bass.

Tutt also expects quite the variety when it comes to tactics.

“The water’s been clear, and there isn’t a ton of hydrilla, so that could make the grass fish small, relatively speaking,” Tutt says. “We’ll see guys catching them anywhere from super shallow on the bank out to 40 feet. Last year there were areas where lots of fish were grouped in a small spot, but this year it’ll be more about running a pattern and having different areas. Both arms of the lake have been fishing good, and it should open the whole lake up and help spread people out. Everyone should have the opportunity to fish their strengths.” 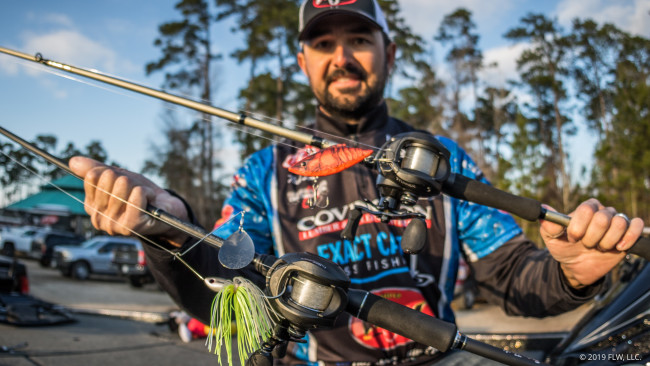 The staple on Rayburn in the winter is the lipless crankbait bite in ditches running through hydrilla, so you better believe you’ll see some Rayburn red Bill Lewis Rat-L-Traps on deck. From there, swim jigs, Z-Man ChatterBait Jack Hammers and spinnerbaits will help power fish up shallow. Tutt also believes there could be a decent frog bite for those looking to explore it.

Out deeper, the numerous ditches and points scattered across the lake are likely targets for a Carolina rig, which is a staple on Rayburn, and there should be plenty of rigs lobbed around with a Zoom Brush Hog on the back. Deep-diving crankbaits such as a Strike King 6XD and football jigs may account for some of the bigger bites from females staging out of the grass, while a jigging spoon could help fill a limit fast with smaller spotted bass and largemouths. 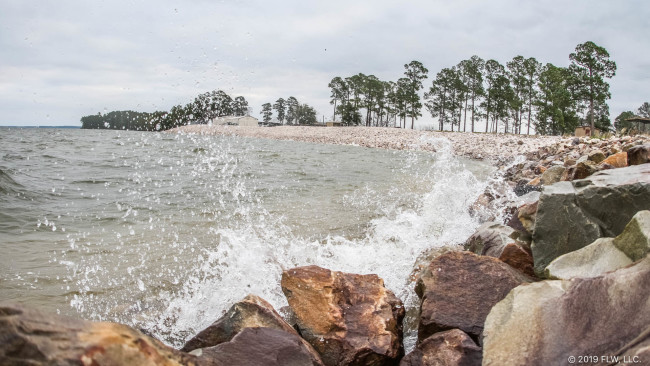 1. Wind – Due to Rayburn’s size, strong winds can make it nearly impossible to get around. Last year, the wind even forced a day to be canceled. More likely, though, the wind could prevent an angler from being able to run all his water if he’s trying to apply a pattern across a large area. Plus, it could dirty certain areas of the lake and possibly shut down fish that have been used to clearer water.

2. Timing – There’s likely to be a solid bite window in the morning and afternoon. We saw it play out that way last year, and it should be the same this time around. Making the right decision on where to start and end your day could make all the difference.

3. Pressure – Whether it’s from other Pro Circuit anglers or locals, fishing pressure in some areas will be a factor, especially if the wind blows. 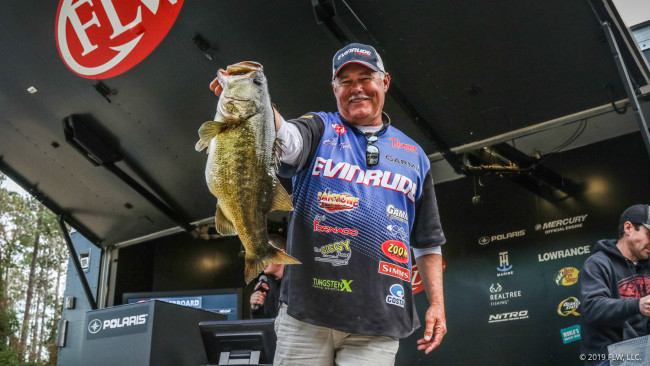 FLW just visited Rayburn in 2019, so there are some obvious picks based on last year’s success. Reigning champ Terry Bolton has had a lot of success over the years at Rayburn, so it’s not hard to imagine him having another solid showing. Nick LeBrun is another pro to keep an eye on. He’s spent a lot of time on Rayburn fishing Phoenix Bass Fishing League events, and he proved his skills there last year with a runner-up finish. There’s also a pile of Texas hammers in the field, including Jordan Osborne, Jim Tutt, Dicky Newberry, James Niggemeyer, Tom Redington, Chris Brasher, Dakota Ebare, Jason Reyes, Troy Roder and Chris McCall. Kyle Hall and Jake Ormond are new pros to keep an eye on.

And, of course, you can’t forget John Cox, which probably goes without saying.